Scientific Name: Melichthys vidua. Synonyms include the ones found here.

Origin/habitat: Indo-Pacific; Invertebrate-rich reef areas, and to depths of 60 meters.

Care: This fish is not as easy to take care of as many other Triggers, but is still an easy species. They are somewhat prone to ich, and having a "cleaner" fish or invertebrate species is highly recommended. Triggers are incredibly hardy fish, and can withstand all but the most heavy parasitic infestations.

They will adapt well to "standard" aquarium conditions, and do not require anything special.

These Triggers are amoung the most gentle of all aquarium fish. It is very rare for them to harm even small fish and invertebrates; though I have had a situation in which my Trigger consumed two Cleaner Shrimp that were added to the tank; this turned out to be a blessing, since he was not taking standard foods before he found out what Shrimp tasted like! He did not consume the other two shrimp, and they remain in the tank to this day. He does not attack anything nowadays unless provoked (which due to the Niger Trigger's pesky attitude, can happen as much as once a day!).

However, like all Triggers, Pinktails are more than capable of defending themselves. They have thick, tough scales, powerful jaws (unmatched in sheer strength by most other fish in the sea), sharp teeth, and two massive spines, one each on the dorsal region and the underside. These Triggers will not tolerate being attacked by other fishes; they will bite back, sometimes inflicting large gashes in the "attacker's" skin (has happened a few times to my Niger Trigger; he was fully healed the next day).

Pinktailed Triggers, like all Tetraodonts, are very intelligent and personable. If your Trigger does not come out and beg for food every time you enter the room, it may be cause for concern.

Minimum tank size recommended is 90-120 gallons; Triggers are far more powerful swimmers than many Tangs, and Melichthys, Odonus and Xanthichthys Triggers (pelagic Triggers) in particular could "blow most Tangs out of the water". Thus, Triggers need just as big as tanks as Tangs do; though like Tangs, they can be kept in smaller tanks (55 gallons plus) for some time until they reach a given size; around 7-8'' for Pinktaileds.

Feeding: They will feed mostly on meaty foods in the water column, but will soon learn to feed from the surface and subsrate. In nature, they eat plankton and algae. See FishBase for more information.

They can be difficult to feed when first purchased; living foods including crickets, live fish (Mollies), insect larvae and live shrimp were used in my case to keep the fish from starving to death while he began to recognize frozen shrimp and worms.

Sexing and Breeding: Sexual differences unknown. To breed, keep the fish in a group in a large aquarium; they are nest breeders in the wild. Fry are probably impossible to raise under aquarium conditions.

Comments: A wonderful species for the reef tank. I would recommend this fish to anyone that has experience with fish that can be finicky at first.

Colours will change to whitish with a black eye when angry. "Emo mode"?

Although this fish is called the Pinktailed Trigger, specimens with an orange or even bright yellow tails have been seen. Mine has a bright orange tail with a pink inset.

Pinktailed Triggers may panic when a hand is inserted into the tank. I believe that explains why the pictures reveal such an overgrown tank! Maintainence will be tolerated more and more as the fish grows accustomed to the tank surroundings; until that time, it may be necessary to sacrifice tank aesthetics in favour of piscine well-being. Dig?

Notes: Research regarding this species was done on FishBase. The fish was purchased for $30 from JL Aquatics online.

Pictures are blurry, but they allow for basic interpretation of the fish's shape and colour. 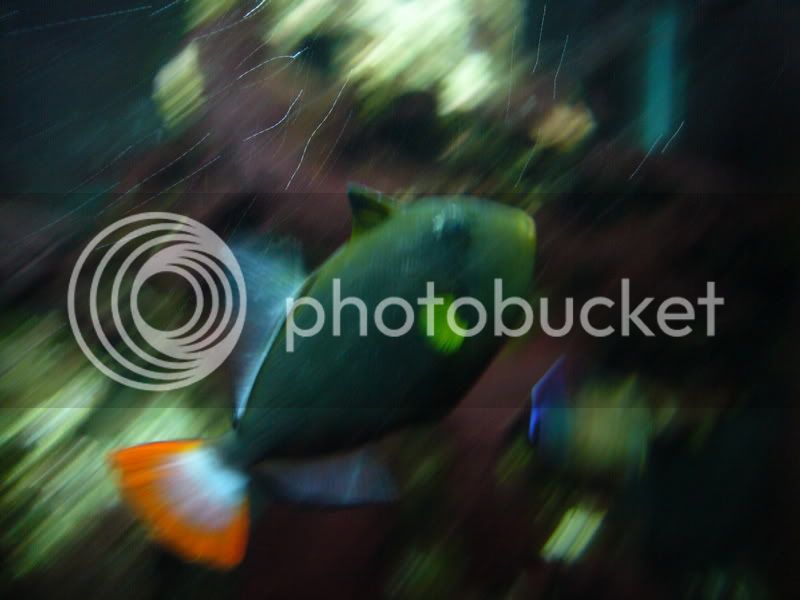 My fish locked in combat with a Niger Trigger: 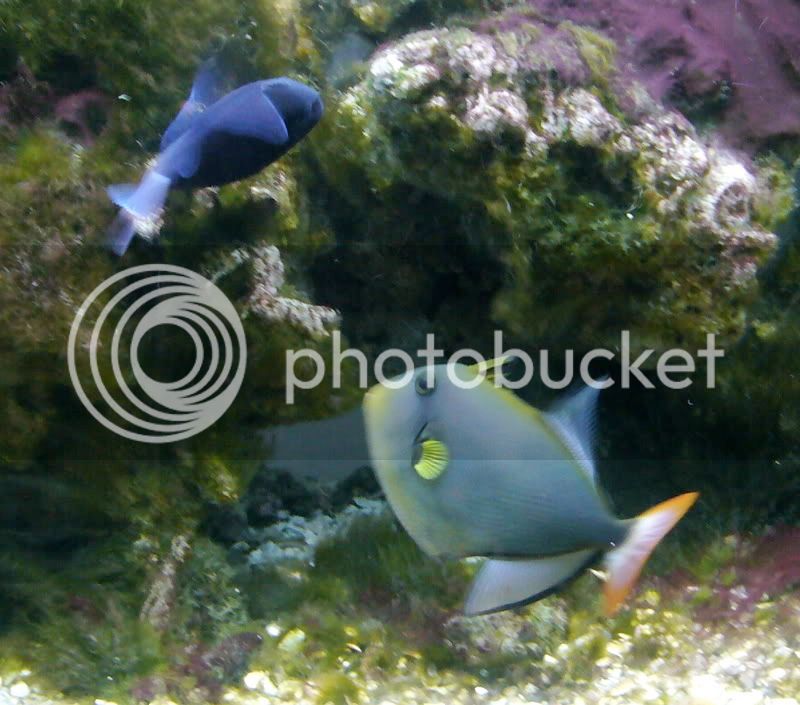 My fish after a battle; in "Emo Mode": 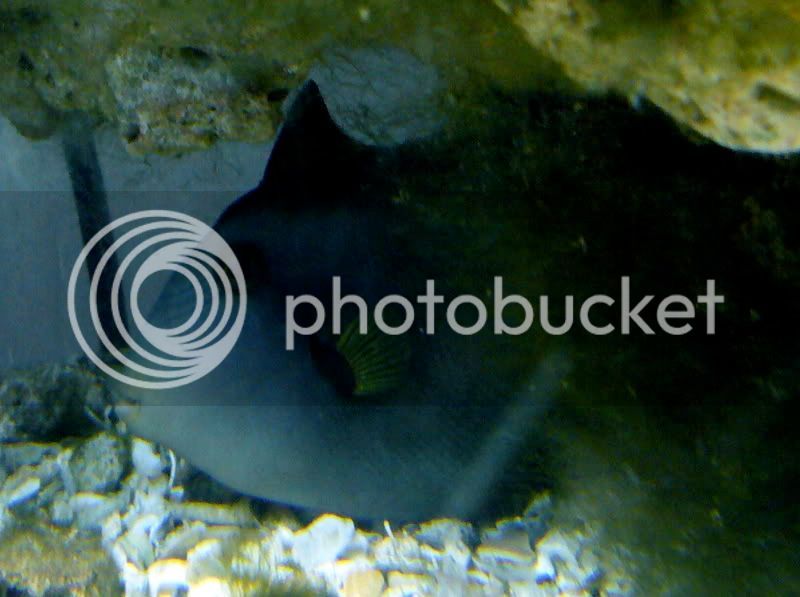 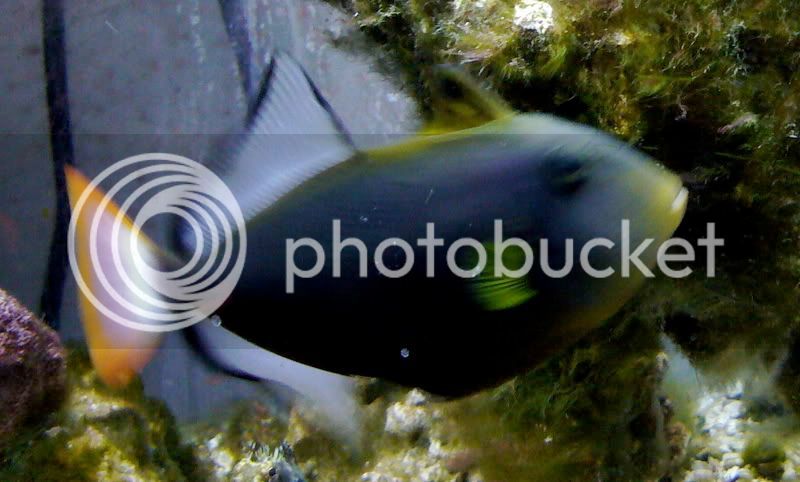 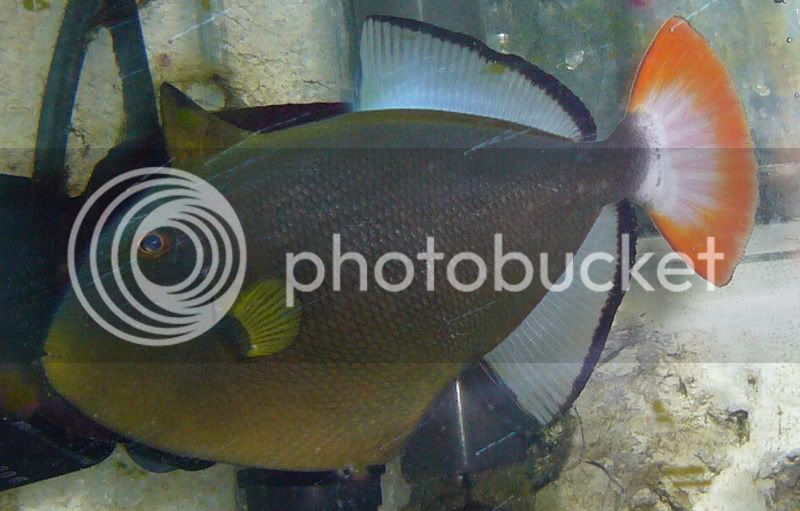 Asking for pics and vids of your tank!