I'm going to make this a quick post and simply show the photo I have which what seems to be the top of as mantis shrimp hiding in a hole in the live rock. 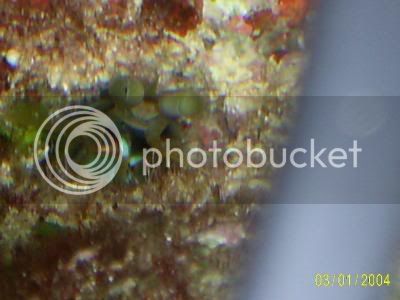 What a beauty too!!!

Ok then.. catching it....
Its not going to be easyas they are highly intelligent and they also have better eyesight than us humans i think.

A mantis usually has more than 1 entrnace to its burrow so cealing the hole with milluput might not work.. they usually just bash a new hole through the rock anyway.. worth a try perhaps though... if you are willing to take a risk of putting your fingers near its entrance

You can try an empty coke bottle... cut off the neck of the bottle and just reverse it into the bottle to make a form of crab trap. put some food in the bottom and place the bottle near the entrance at an angle ot stop the shrimp from escaping. Now this "might" work but you probably have just 1 chance with this because it will know the next time you try that its a trap

You could ty removing the rock and placing it in a bucket of tank water and then raising the tmperature slowly. increase the temperature of a period of 24 hours until the shrimp runs low on oxygen and leaves the rock to look for better water. this might work but it also puts the rock under immense strain and all other life will suffer also.

If this fails.. how about having a nano tank with just the mantis? You didnt want fish anyway and only wanted inverts. just have the mantis with corals.. its a beautiful crature and highly entertaining. If i had a nano with a mantis i would be very tempted to keep it as a specimen tank.
C

I've also heard that instead of raising the temperature, immersing the rock in more saline water.... something around 1.030-1.035 SG perhaps.... can force a mantis out of the rock. If you do this, it would be like a freshwater dip for saltwater things, and has to be done quick. Don't dip any corals, and don't keep it in the higher saline water for more than a minute.
OP
OP

Well it seems to be a very nice creature. I fed it a feeder fish and it snatched it out of my tweezers in the blink of an eye.

It doesn't seem to come out of its hole ever since I fed that fish to it. I guess it's had it's meal for the day.

One method I have seen (like chkltcow said) is that if you dip it in freshwater for under a minute, it will drive the mantis out and keep the other live rock critters alive. I might try that out tommorow.

Cute critter, some people will coax them out of ther holes with food then stab them with things like ice picks.

Pretty fellow, shame you cant keep him (hes a smasher if he's living in the LR, he will eat hermits, snails, and every now and then a fish, plus grind up your LR and endanger your glass)
L

dont tou have a sump that you could keep it in?, i have one living in mine, which i actually bought!. Theyre fantastic creatures, and very intellegent as navarre said, would be ashame to kill it!
leon

Im new to the marine world but I saw this show on the Discovery Channel about marine biomes and the Mantis shrimp was a feature on it. From what I saw it can hit a target so fast it can make the water flash by making a supersonic vacuum (or something like that). They also said that they have the power to break your fingers and hand bones; they also said this is one of the most common marine accidents.

They said that they dont like a certain mineral, I forgot the name of it but I mihgt be able to find out somehow......maybe it was freshwater or something like that like everyone else said....

Is it possable to pul the shrimp out of the rock? Kinda like fishing? Tie a pieve of food on a tweezers and then slide a pieve of plastic or metal behind him before he goes back in or is he to fast? Just an idea

I had an idea; if you dont like the shrimp, or rather dont have a plcae for it, maybe you could sell it to a pet store from some store credit and buy a coral or something
C

Danno said:
I had an idea; if you dont like the shrimp, or rather dont have a plcae for it, maybe you could sell it to a pet store from some store credit and buy a coral or something
Click to expand...

Doubt you can sell/trade it to a pet store, as most don't want them either. I still think the best way to get it out would be a saline dip in a bucket of hyper-saline water (1.035 SG or so). Once it's out you can figure out what to do with it.

If you don't want to keep it, and your LFS won't take it, you can at least ask them if they know someone locally that will. A lot of people love mantis shrimp and other predatory animals, and would probably love a freebie if you want to get rid of one. I can't remember the URL, but there's a web site named "Grim Reefers" that's dedicated to predatory fish/inverts... and they might be able to point you to a taker or tell you how to get the little bugger out.
You must log in or register to reply here.