Maximum size: About 4 inches in the wild, but rarely exceeds 2.5 inches in captivity.

Care: The Ocellaris Clownfish does not have very needy requirements as it is very hardy and not demanding. A 20 gallon tank minimum for a pair is recommended (preferably 30G's). The fish's maximum size is approximately 2.5 inches. Filtration doesn't have to be pristine, but keeping nitrates as low as possible for them should always be done. They are not sensitive to water parameter swaying although maintaining minimal fluctuations in parameters is always desirable. These fish are as hardy as most marine fish will come. Specific gravity is best between 1.020 and 1.026. Recommended pH levels can be between pH 8 to 8.5 and hardness of dKH 8-12. They do best in temperatures ranging from 72F-78F (22C-26C). Clownfish can get along well with most species of marine fish such as dwarf angels, basslets, blennies, cardinalfish, gobies and most fish that cannot fit a small clownfish into their mouth or an aggressive fish that won?t bully them too much.

Feeding: The Ocellaris Clownfish is not a fussy eater at all and will accept most marine fish foods such as flakes, spirulina and brine and mysid shrimp.

Sexing and Breeding: There is not any way to tell the gender of a clownfish from the outside, however breeding in an aquarium is quite possible. Having a group of several clownfish in a tank (4-8) and allowing them to pair off is how it?s started. Not all clownfish will pair however and may become aggressive between each other. When a pair is established and lay eggs, (Approximately 100-1000) they can become very aggressive towards other fish that come near. Clownfish will usually lay their eggs around an anemone for protection; however an anemone is not needed for breeding to occur. If the tank is not large enough for other clownfish to be around, it is highly recommended they are removed entirely as they can still be aggressive towards other un-paired clowns.

Comments: A very active and temperate fish, the Ocellaris clown is the perfect fish for a beginner to the marine hobby. When introducing clownfish into an aquarium it should be done simultaneously as clownfish can be aggressive to their species. They also have a relationship with anemones (like most clownfish) however an anemone is not necessary in the aquarium. Anemones are known to have much higher requirements then clownfish and are not recommended for the beginner marine aquarist. Many will host in other corals that simulate an anemone such as frogspawn, torch or plerogyra corals.

Note: The Ocellaris Clownfish must not be confused with the Percula Clownfish. Apart from a few differences it looks almost identical to the Ocellaris and is slightly less hardy. This link can aid in anyone trying to find out which species their?\ss is.

Photo: A Pair of Ocellaris Clownfish. 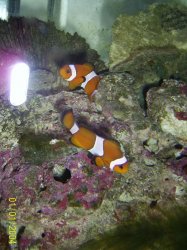 Below is a mis-barred tank bred specimen. Tank bred Amphiprion ocellaris can actually gain a relatively thick black edging to the white bars, like an A. percula's. Black egding was not evident in this specimen at the time the photo was taken. 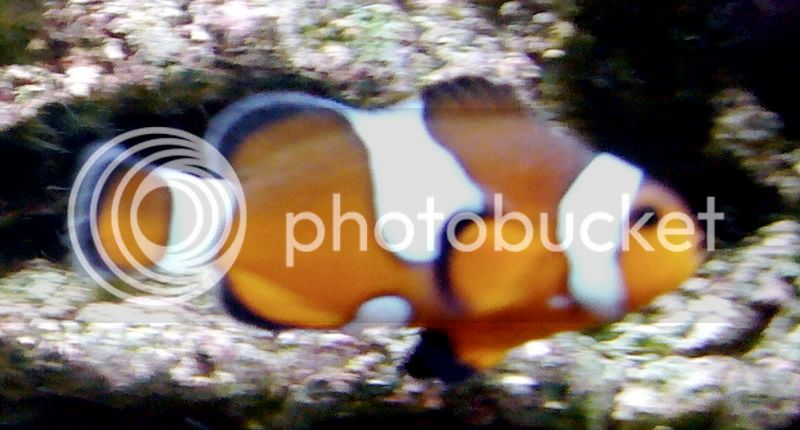 I love the new color variations now available. One of my favorite fish is the Picasso Clownfish. Have you seen the amazing Storm Clownfish? Stunning!

This is a really old thread (2006-2008) so you might not get a response form the original poster (OP). However, if you have pics of the new colour forms you could post them here for everyone to see. Or start another thread showing your fish tanks and fish.
You must log in or register to reply here.
Share:
Facebook Reddit Pinterest Tumblr WhatsApp Email Link

Riddle of the day

M
Is my molly fish pregnant?