Maximum size: 12 inches+ in the wild, 10 inches in captivity.

Care: The Niger Triggerfish is a hardy peaceful marine fish great for beginners that can afford/sustain a large tank. A 75 gallon tank minimum is recommended and perhaps upgrade as the fish grows. The fish's maximum size is approximately 10 inches in a home aquarium. Specific gravity is best around 1.020 and 1.028. Recommended pH levels can be between pH 8 to 8.5 and hardness of dKH 8-12. They do best in temperatures ranging from 72F-78F (22C-28C). This species is one of the most compatible triggerfish available at fish stores.

Feeding: This triggerfish is not fussy and will accept most foods such as mysis, krill, brine, pellets and flakes. As they mature, larger pieces of clam, krill, squid or prawns will be accepted.

Sexing and Breeding: Not much is known on breeding however they are egg-scatterers and males tend to have longer tail streams.

Comments: The Niger Trigger is one of the most peaceful triggerfish available and provided are well fed and given enough space, will get along with most fish. Invertebrates however are still considered food to them as they are their natural food in the wild. Some reports claim these fish can even be reef safe, however it is to be done with caution.

Note: This trigger, also called the â€œRed-Toothed Triggerâ€￾, stands up to its name as when it matures as an adult it grows bright red teeth. It should be well fed on hard things such as krill, shrimp and similar molluscs. This is to wear down their ever-growing teeth. 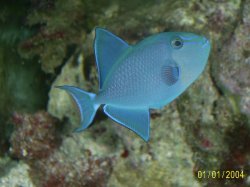 This one has had it's "streamers" bitten off. They regrew several days later. Note the fantastic colour of Niger Triggers; oddly, they seem more vibrant in the morning, and when looked down onto (as opposed to directly at). 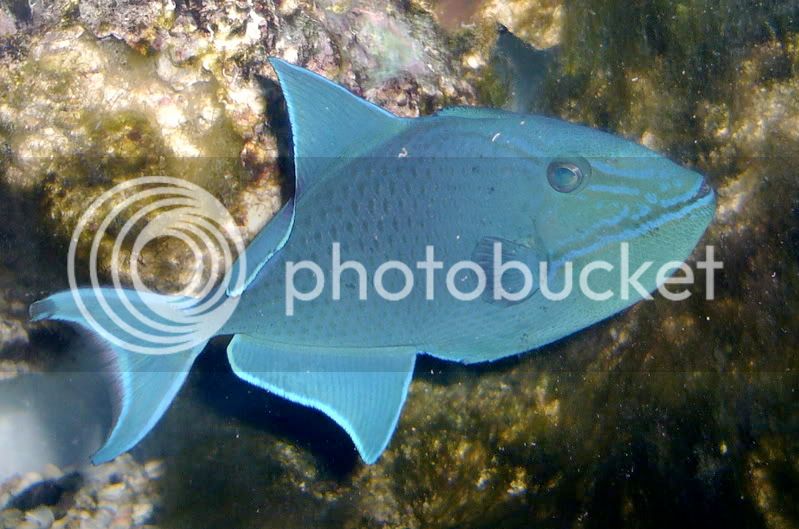