My Attempt (So Far) At El Natural Or Something Similar

So the following is my first attempt at a low tech/low cost El Natural style tank. The goal from the begining was to make a very lush densely planted tank. This tank was filled for the first time on November 7th so it has been running for half a year already...

When I started this tank I had no intentions of spending any money on it apart from plants and other live stock. The substrate was easily the hardest part of this tank. It was a mess and not nice to work with. Anyway took a shovel a bucket and a bunch of plastic bags and went to a wooded gully across the road. It floods a lot and it was easy to find what I was looking for, which was sand, nice clean black dirt, and a clay rich dirt. Then we got to washing my newly dug up substrates. I understand the whole 'mineralizing' thing, but no way I was going to do that. So washed stuff best we could. Clay was the worst as it just lumped up. Dirt turned to mud, but got all the big pieces/worms out of it. Sand was the easiest. Layered my substrate a very thin and lumpy coating of the clay, then a inch of the dirt/mud, a layer of oak leaves followed, then lastly at least an inch of sand. Found it best to work with my substrates when they had all the water squeezed out of them. The purpose of the leaves was mainly just a idea I was trying out. I expected major nutrient leakage into the water column, and figured the leaves would restrict flow in and out of substrate. Hopefully though not enough to make it go super anaerobic. Then I let the tank sit for a day or two with wet substrate to push all the little wigglies to the surface before I filled it. 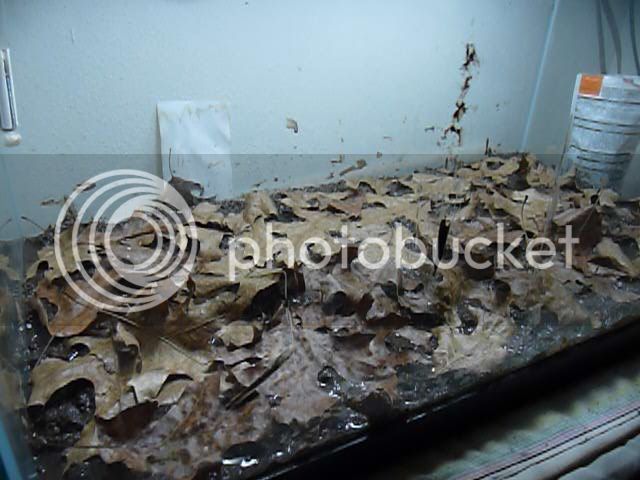 The tank was then filled and lots of little grindal worm-sized worms started coming out of the substrate and drowning. The tank stayed quite clear, though it was filled to the half way point with a slow siphon. I threw a bunch of cherry shrimp and ramshorns in there within hours to deal with the drowning stuff and to see if they had any major issues. 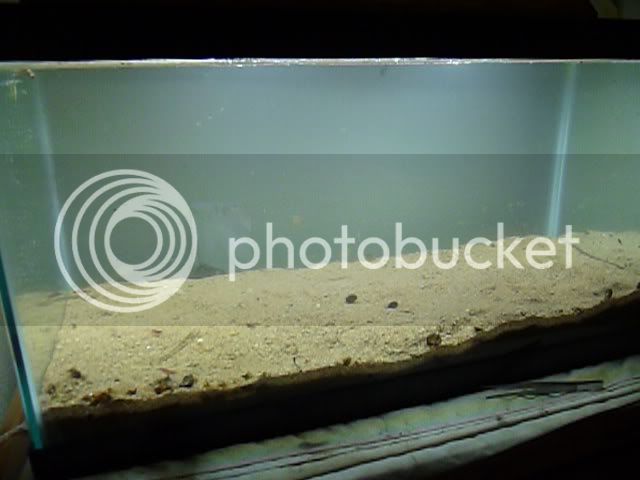 Then some initial planting began. Tried to plant it as much as I could with fast growing plants there was no major attempt at a aqua scape for the first few months. It had 4 fish added on about day 3 of being filled. A pearl daino and 3 male endlers since the cherry shrimp were fine. A few WC were done the first week mainly encase we still had excess nutrient leakage from the substrate. It was my attempt to avoid algae in the initial stage. Day 10 it looked like this. 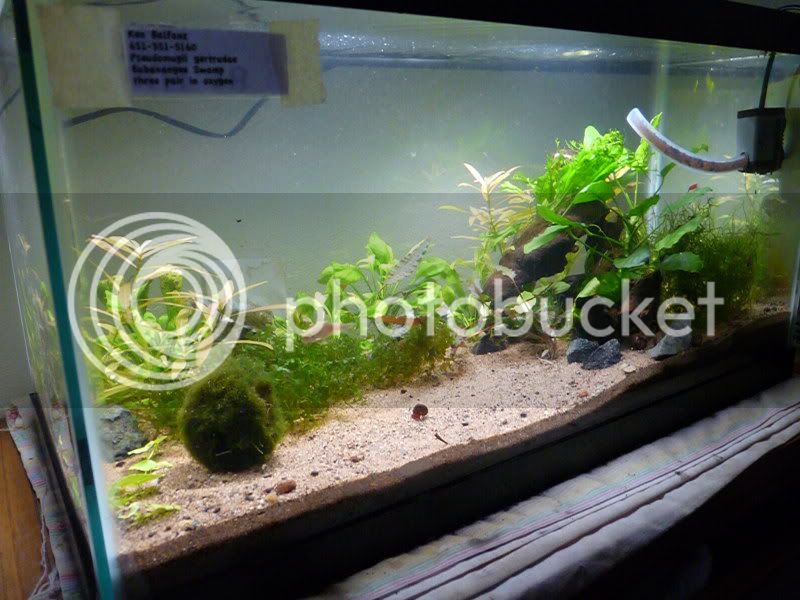 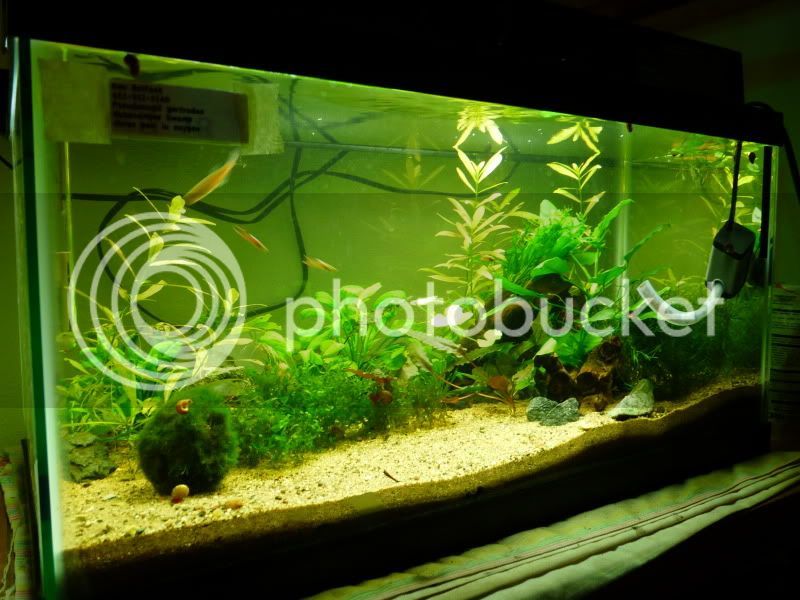 Around day 40 things were all still going good. No algae. Stock was increased at some point. This was around the time I added my first bamboo shrimp who died the next day in this tank. I had had him for months so IDK what happened there. 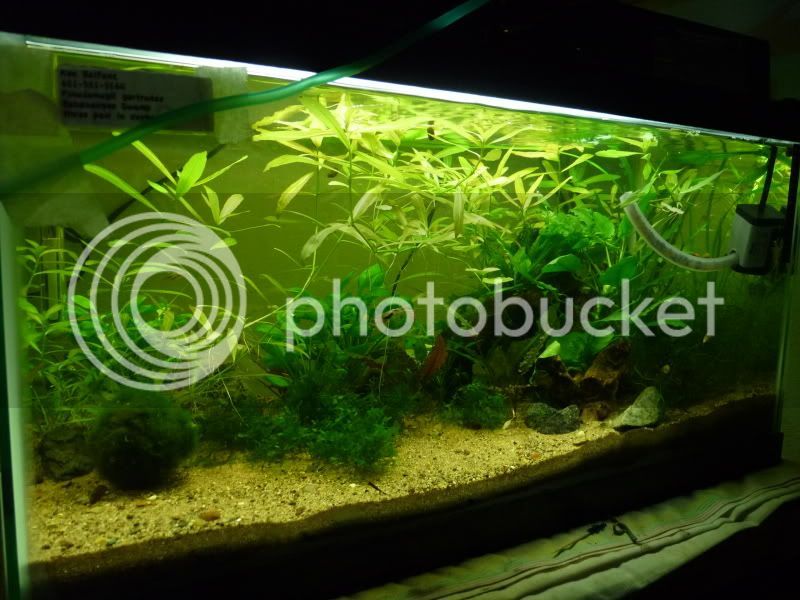 On day 70 I got down to business and scaped the tank. First picture is the anubias barteri that grew about 3x its size since the tank was setup and had a flower. I promptly chopped it into 3 plants after that picture. Sticks and rocks used for aquascaping came from the woods. Apart from two small pieces of actual driftwood. 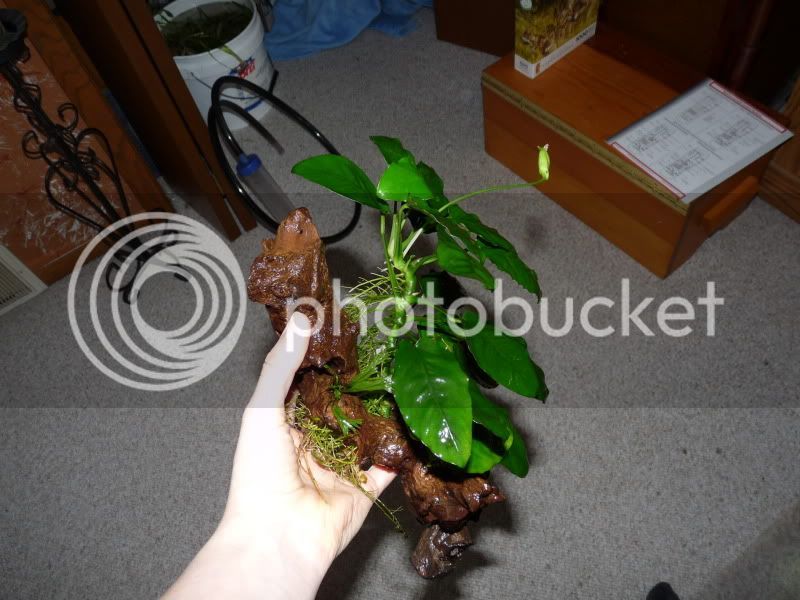 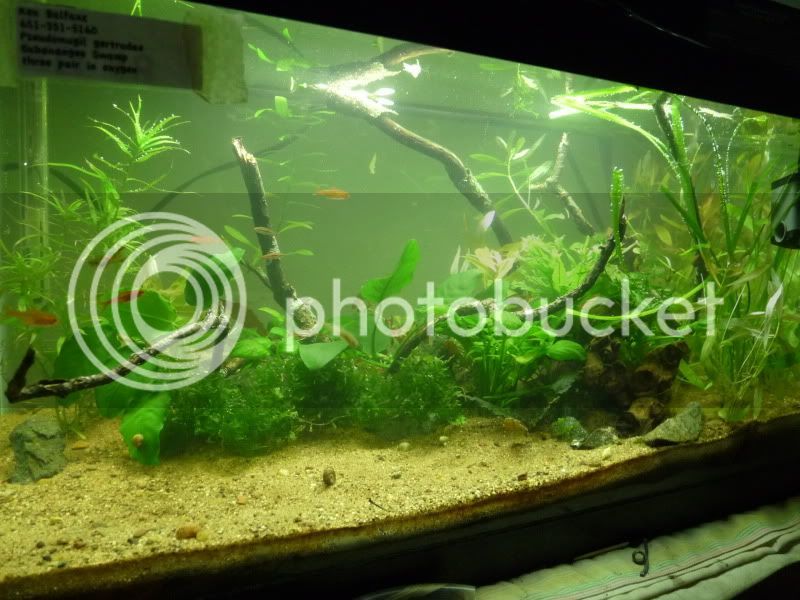 Day 90 things were still going smoothly. Due to lack of any sort of mechanical filter tank had a perpetual haze. Stocking at this point was around 15ish small fish. Endlers, ember tetras, blue eye rainbows, sparrow rasboras... 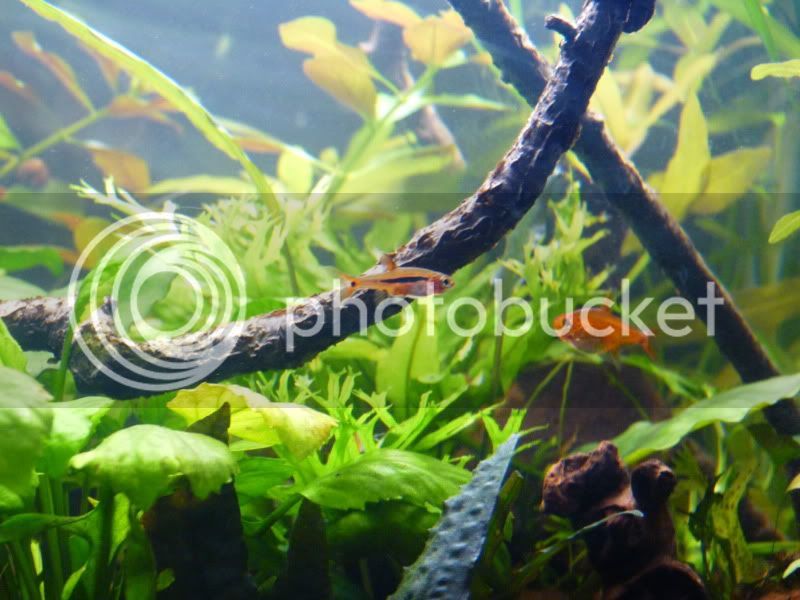 Day 120ish. Addition of many new species and fast growth with the stem plants we had a little jungle going. 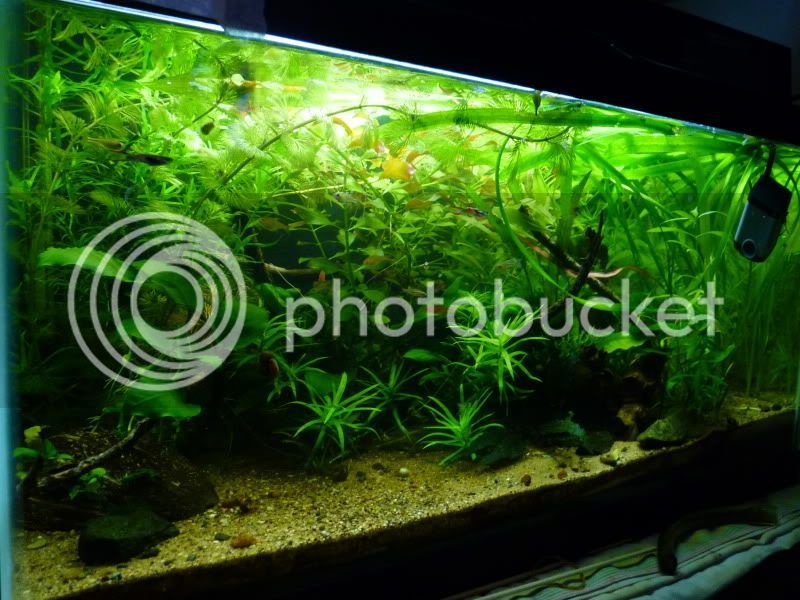 Day 122ish. Did a major trimming slight change is aquascape and found a good zone. Lots of happy plants! Usually I stick to 3-5 species max in tanks. IDK why but this one has gathered over ten different species. 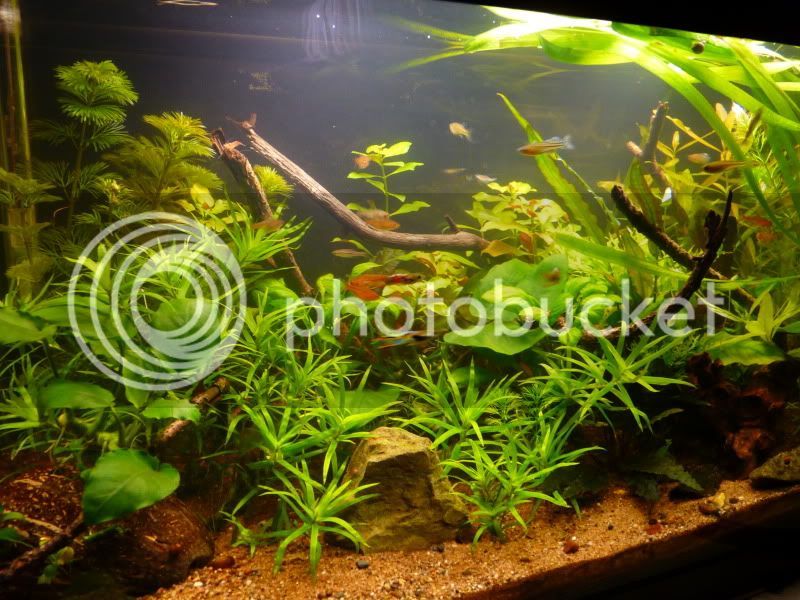 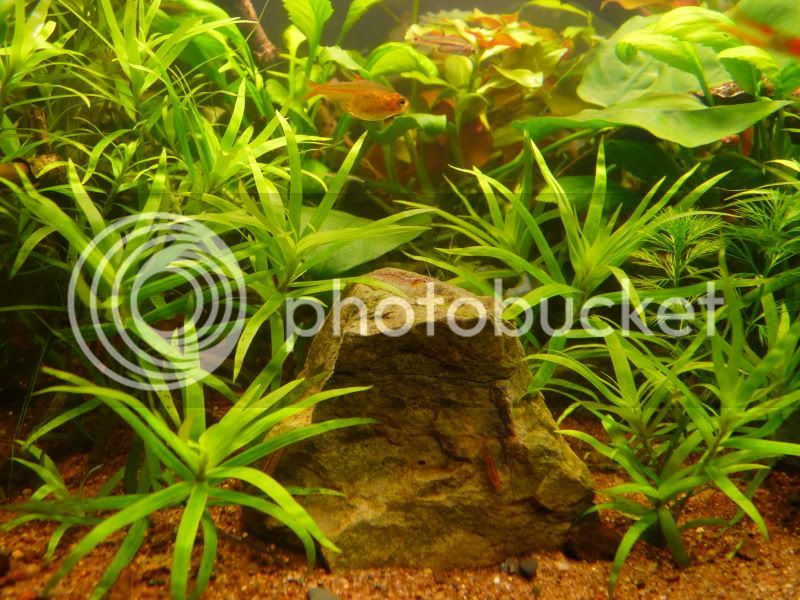 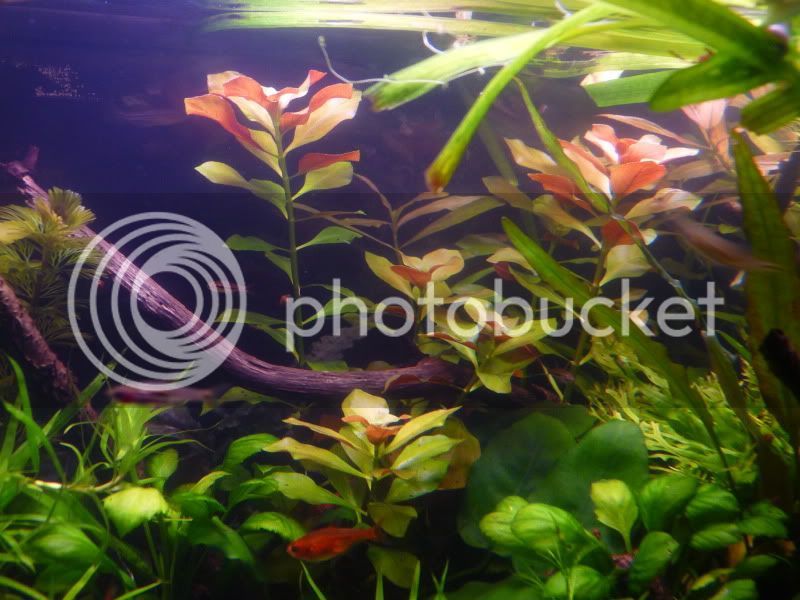 The last picture was taken a month ago. The tank has been doing great with zero issues or algae up till a week or two ago. Its currently hit some sort of nutrient deficiency considering the sudden halt in growth. This tank so far as worked much better then expected and should over come its first issue as soon as I have time. I was expecting something like green water or bacterial bloom in the first week

. The tank without fail from 2 months old up till a few weeks ago would consume the 20ppm of nitrates in my tap to just about zero before a 50% water change. Most recent test shows reduction in nitrate uptake along with the reduction in growth.

About 3 weeks ago this tank had another bamboo shrimp added who is doing just fine and adjust to his home. Since he is actually useful I have named him Fluval. I never name things lol, not even my 4 year old caecilians have names. Anyway I swear Mr. Fluval has made this tank clearer with his shrimp labor. I guess its a win-win.

looks really nice Mikaila, thats why i like our plant journal sedction. There is some really high tech tanks and really low tech, you won't find that on many forums.

i liked day 120ish the best, i love the over grown jungle look
B

What are the spikey looking stems in the middle?

Location
Commuting between Oaxaca, Mexico and Montreal, Can

Wow! This is a very interesting thread.... And great results with this type of tank. Any ideas on why the growth started stagnating?

Looks absolutely brilliant! What species is the plant in the picture above day 132 ish?
OP

That particular plant is Heteranthera zosterifolia or stargrass. Other species are:

Growth I am almost positive is a nutrient issue. When you setup a natural tank you give it a large supply of nutrients in the substrate. The clay was for minerals and black dirt was organics. I kinda see it as a one way system. The tank will flourish to start with, but its possible to use up all present nutrients, if nutrient input was not efficient. When you trim plants and remove them from the tank that is a nutrient loss. Feeding fish and shrimp is the only input this tank gets. I don't think anything has been used up yet, I expected it to go for a year or more. Its mainly the stem plants that have stopped growing, my crypts and anubias have all increased growth. Which is something that seems to be typical when I have nutrient issues. From my understanding these issues are more concerning in filterless tanks. I am not fully stocked in this tank and water quality seems to be fine still. I'm kinda curious if a nutrient deficiency could result in a water quality issue if the tank was borderline stocked then uptake by plants suddenly decreases... Anyway I move in a about a month so we will see what I can accomplish with it before then. Most stems absorb stuff through the leaves more then the roots. What I am seeing is those with the smallest root systems are the most effected. The stargrass and cabomba are the two main ones. The ludwigia seems to be doing okay. I'm going to see if disturbing the substrate has any effect on the plants. Like exposing some of the dirt layer. This has a clear effect on the shrimp as they all congregate and start eating it . Plants require about 17 nutrients if I remember right. It only takes one missing to have an effect. Perhaps something is not leeching out like I thought it would. That said plants root VERY differently in soil I have found. Its impossible to uproot a lot of them, even some of the stems and especially the hygro the roots or stem will break before they pull out of the substrate.

As far as the use of the leaves in the substrate IDK if they did anything really. I never had any algae issues(yet), but substrate also went pretty anaerobic, which was something I was expecting. The 'idea' of using them was to reduce water flow through the substrate, which as a side effect would likely reduce O2 flow, all in an attempt to control nutrients while the tank and plants were establishing. It would be easy for the plant roots to break through the leaf layer and they will also degrade quickly regardless. None the less its still quite anaerobic and must be poked occasionally with a kabob stick to release the gas. I've never been too concerned about anaerobic substrates though, certainly never seen any negative impacts as long as you poke them.

This is the tank as of last week. If you look closely you can tell the cabomba have gotten much smaller leaves and more straggly. One thing is I love my sand way more then I expected. Never really liked the look of sand, but it seems to be more that I don't like the look of store bought sand. Either it looks too light/white to me or its way to uniform to really look natural. I'm liking it much more with the free stuff. Uneven grain size, intermixed with small pebbles of varying shapes and colors. I think the water looks clearer from Mr. Fluval. 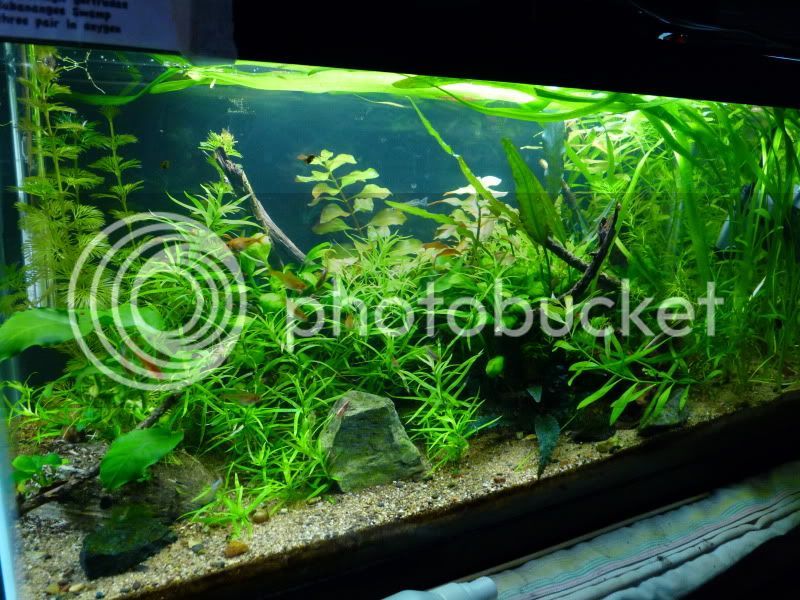 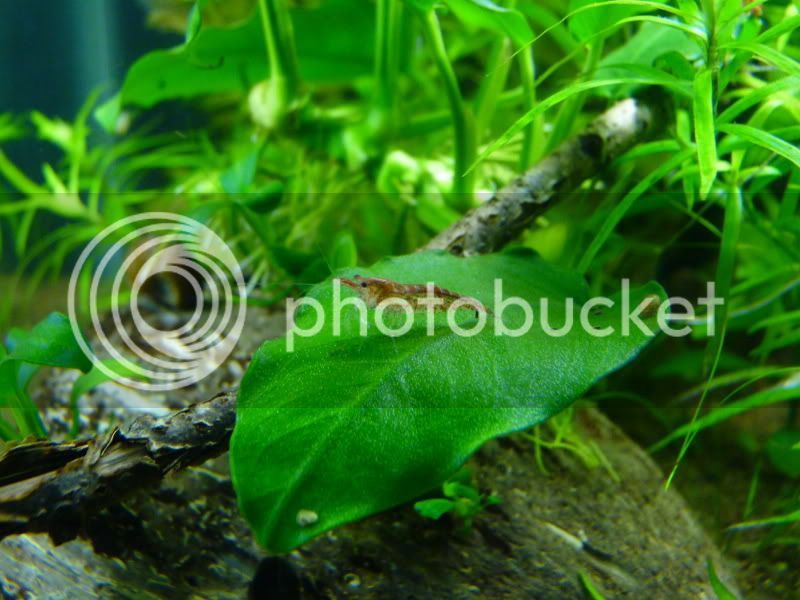 You've been holding out on me, Mik...

i am having so much trouble with my ten gallon and getting plants to grow, you are clearly quite the expert, it is the 48 ltr fish pod with x2 15 watt bulbs but nothing other than 2 amzon sword have grown,(when i say grow i mean stay alive) and there leaves have algea spotts on them, please can you give me any advice on anything? and also what plant might flurish in my tank? thank you very much

Looks awesome, liking this a lot.

B
Fuzz on plants

27 minutes ago
utahfish
U
G
Advice on Tank Size