Thought I would share this as it has taken over our lives these past couple of months and now at a loss for what to do!

Nothing to stress about now!! Though... there is always coursework to do... *sigh*.

The reptile keeping community is a very tight one, everyone knows each other and will go out of the way to help each other, the community is really quite incredible in the UK and even Europe as there are reptile shows in both countries and we all traipse between Holland and UK to meet each other, share stories and trade reptiles (when breeding to improve the species and create new colour morphs, you end up with excess stock and so the excess stock is swapped and sold to other keepers and breeders, not like a shop... but to share and keep the hobby alive).

A few years ago, a well known reptile keeper (and better known now!) Dave Clemens was involved in a rescue case in which they were called out to the house of someone with a lot of reptiles and a lot of problems... to say the least... when they got there (expecting to find lots of living animals that this person had tried to sell them!) they found a lot of very very sick and dying animals and worse still, a lot of very dead animals too.

One of the most memorable of these is a Green Iguana named Elvis, he has become a celebrity in his own right and everyone in the hobby knows him.

I want to share his video, but just as a warning, there are shots of him when he was rescued and of some of the reptiles he was living with at the time, its a very sad video and might be upsetting.

In rescuing Elvis, Dave ran up costs of thousands of pounds in order to keep Elvis alive, vet bills, medications, specialist equipment, housing and lighting and food. This isn't taking into account all the other reptiles from this one household and the other animals he had and is still taking in!

Seeing as the charity is unfunded and relies completely on donations, a load of us got together and planned a charity event because now, years after being rescued, Elvis was well enough to need a very large enclosure and an outdoor enclosure too!

It was only a small fete in a working mens club but we arranged face painting, bouncy castle, stalls selling jewellery and ornaments, cakes, tombola raffle and of course the animal displays! We had the mammals outside (thank goodness for such a lovely day!) with mice, rats, gerbils, rabbits, pygmy hedgehogs and of course the skunk!! Indoors we had a lot of snakes including Burmese pythons, common boas, bull snakes, corn snakes, rat snakes, royal pythons or various sizes, a huge bosc monitor, bearded dragons, a tortoise, my yemen chameleon and of course, Elvis the Iguana!

We had lots of amazing people and companies donate for the charity! It always helps to have such a wonderful bubbly person as our Natalie to be the one approaching companies and asking for donations for the event! But we had donations from companies like Sainsburys, Pizza Hut, local restaurants and pubs, go karting companies, paintballing companies (they donated a lot of tickets for 10 person groups to go paintballing!!), MK Ink tattoos donated £50 worth of vouchers! Rebellion Brewery donated an epic box of their amazing ales! Lots of local crafty people made prizes for us like bags and jewellery, the local golf course also donated vouchers, and of course, Cuppy Cakes created the most amazing 'Elvis the Iguana cake' ever!

Its amazing how many companies were willing to donate prizes for us to raffle off!

I had to share this because the outcome was just wonderful! We raised just over £450 on the day purely from donations, we had people raise nearly £200 before the event but better still, we had a donation of a microchip scanner worth £200 from another very important animal charity and better still!! The people building the £450 enclosure for Elvis to live out his days in offered to do the build for free. I don't know the company/mans name but he is just amazing!

What a wonderful thing to do!

Now Dave can go on rescuing many more reptiles! He shouldn't have to, the reptile keeping community is such a tight knit one that animals are just so easy to rehome! Its so easy to get word out there that a home is needed for an animal and someone will come forward!

Unfortunately, it's the people who keep reptiles but don't involve themselves in the hobby, think they know everything without talking to other keepers and then take on more than they can cope with and as a result, when they desperately need help, they don't know who to turn to. Its people like this that make the reptile keeping hobby so difficult and they are why we hear so many horror stories in the news. 99.9% of which are horribly inaccurate, poorly reported by people with no understanding and hyped up by the media, not helped by the 'antis' who also have no understanding of the hobby, the animals or the care involved.

Especially as our charity event was followed the next day by the annual Kempton Reptile Show (which, by the way, was amazing! the animals there incredibly, the display stands amazing and the first appearance of one of only 3 in the world black eyed leucistic boas up for sale at an astounding £35k!)

I just thought I would share this as I am so proud to be part of the reptile keeping community in this country because despite the people who let the side down, we are a great community of really crazy people who love our pets! (and crazy clothing, hair dos, tattoos and piercings as well apparently!

Here is the website for Dave's Luton Reptile Rescue in case anyone who reads this needs help with their reptiles (even if you aren't near Luton, chances are, Dave know's someone near you!) or better still, you can offer a home to rescued animals.... or even better still, you wish to make a donation!

And for those who wonder... this is a video one of the reptile exhibitors took at the show when it was first run in 2010 to give you an idea of what a show looks like and they types of 'crazy' reptile keepers there are!

To me, this looks like it was taken within the first half hour or so of the show opening as it gets a LOT busier later on. All the sellers have tables facing outwards and the visitors walk round the 'pathways' between tables to look and chat with breeders.

It looks like chaos but is scarily organised and a lot of organisers walking around as well, and very *very* strict regulations for the care, selling, buying of animals (no retailers or anyone holding pet shop licenses are allowed to sell, the shows are purely for the hobbyists to get together and share their 'excess' livestock with each other), there was also a reptile 'creche' where you could leave all animals purchased in a quiet room with members of staff to care for them so they don't get jostled or stressed. Couldn't be more organised if they tried!

The shows are a great chance to meet fellow reptile keepers and the next one coming up is, I believe, in Doncaster in September

If I go to the next Expo, Can I meet you Mbou?
OP
OP

I can't get to Doncaster unfortunately

but I generally go to Kempton every year! If you arrange to get to Kempton this time next year.... let me know

And here are two photos from the charity event...

Dave hiding behind and under THE Elvis the Iguana 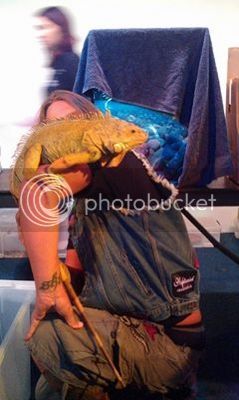 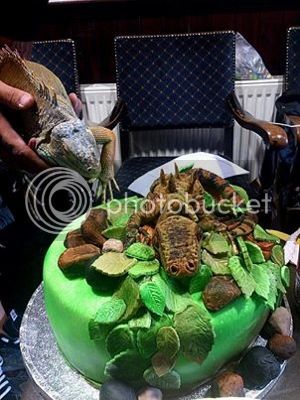 It's a shame you can't get to Doncaster
I'm going because I'm picking my two new babies up.
OP
OP

I know, my friend Kat will be there as she has a table!!

She will have some really gorgeous Leopard Geckos, not many as we sold most at Kempton lol... and a lovely male skunk African Fat Tailed Gecko as well, cant believe he didn't sell!

Here is the website for the £35,000 pound Black Eyed Leucistic Boa (its the white one in the photos, its sibling is only worth about £25k

MBOU said:
I know, my friend Kat will be there as she has a table!!

She will have some really gorgeous Leopard Geckos, not many as we sold most at Kempton lol... and a lovely male skunk African Fat Tailed Gecko as well, cant believe he didn't sell!

Here is the website for the £35,000 pound Black Eyed Leucistic Boa (its the white one in the photos, its sibling is only worth about £25k

Was worth a try

She has good care sheets and information too if you know anyone going with you... her stock is good and well priced shameless plug but hey...

MBOU said:
Was worth a try

She has good care sheets and information too

if you know anyone going with you... her stock is good and well priced

I have 2 friends going with me and one of them is looking for a female gecko for his male Tremper Albino lol.
OP
OP

Tell him to email Kat, she will help him find one if she doesn't have one... but hers have lots of exciting hets!

MBOU said:
Tell him to email Kat, she will help him find one if she doesn't have one... but hers have lots of exciting hets!

Will do lol.
You must log in or register to reply here.