We have a winner in Tropical Fish Forums'
November 2022 Pet of the Month Contest​
We had 11 awesome pets entered in this month's POTM contest. But only one could win...
And the winner is.......

Jaylach
Let's all congratulate him 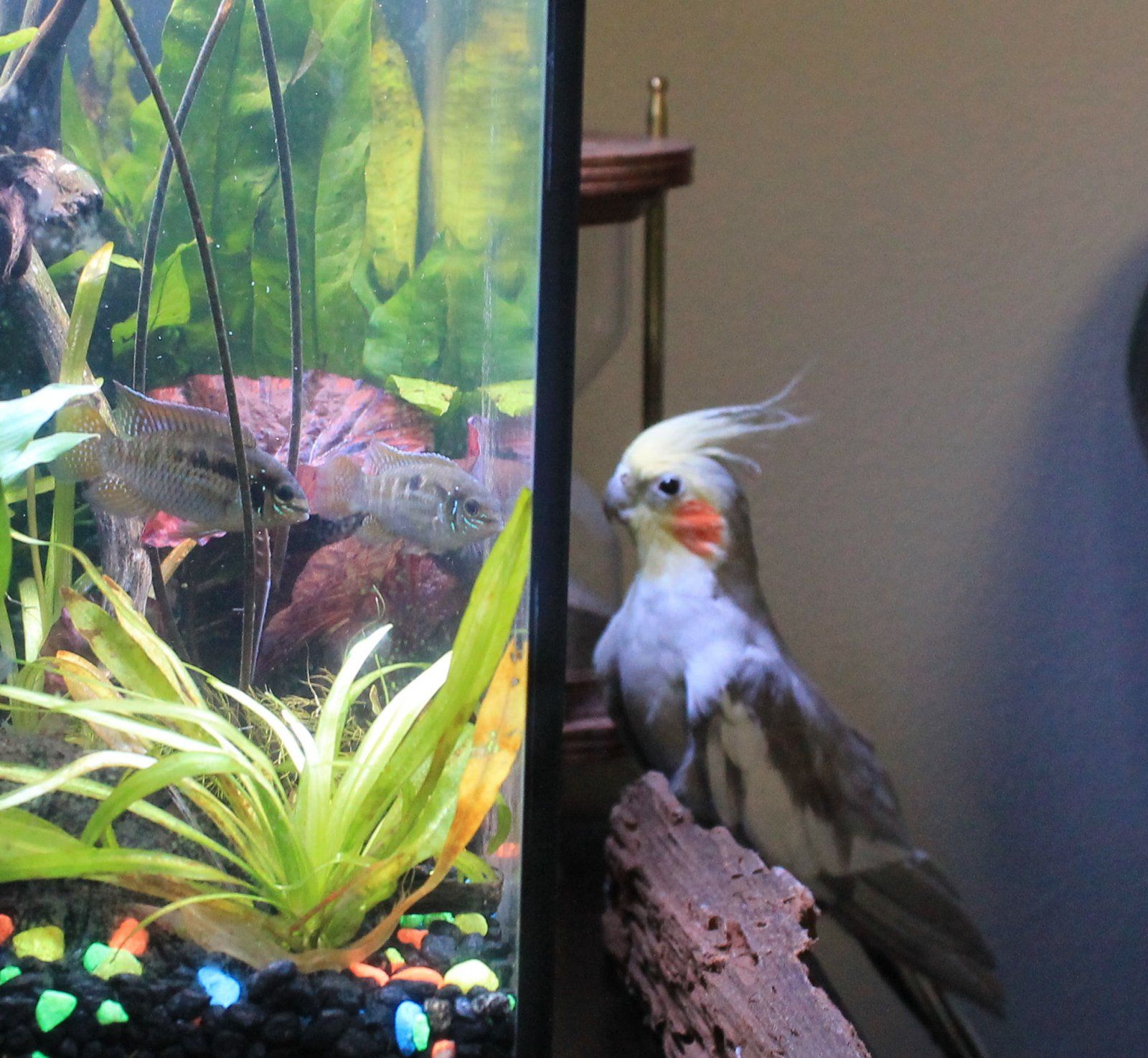 This is Terabit, one of my best friends but a total pain. He loves my aquarium and, from the photo my cichlids also seem interested. I'm just not sure if he isn't thinking Yummy, fish fry and if the cichlids are not saying na na nana, you can't get us.

Terabit is actually a bit of a sad case. I took him in as a neglected rescue bird. Before I got him he had a bonded mate that died; probably from being egg bound from a lack of a calcium source. I base that on it taking over a month before he realized that a cuttlefish bone was something to nibble.

We are working on it but he is still, after about 4 years or so with me, still cage bound which means that he is VERY territorial as to his cage and often resists coming out. He comes out on his own much more now than when we started but he is still a very troubled bird. Once out of the cage he is totally different and quite friendly. Sort of think of being cage bound as being in a 'safe house'. If you come out you are in danger.

It is amazing as to the difference between when he is in his cage and out. When in his cage and I change his food he will actually try to bite me at times. Out of the cage he will walk around on my head and shoulders. Actually he will dig under a shirt I'm wearing and seem to cuddle with just his head sticking out of the top of the shirt.

I don't know if we will ever actually fix each other but we are working on it. Even with all the issues we are still good friends.
Last edited: Nov 27, 2022
OP
OP

Congrats, @jaylach, on your POTM win for your pet birdie, Terabit. Quite the inquisitive bird you have there. You took a fantastic photo. Well deserved win.
Coming in 2nd place is @PewPewChris with his German Shephard mix named Leela. Love the photo with the setting sun on a boat.
And coming in third place is @FishFinatic77 with his inquisitive looking budgie. Handsome bird, and great photo.

Thanks go out to everyone who participated in this contest by entering and/or voting.

Right now we are accepting entries for aquariums sized at 16 gallon and smaller tank. if you have a tank of that size, considering entering your tank. Click on the link below to view the entry thread

POLL IS NOW CLOSED! :big_boss: PLEASE VOTE! We have 7 awesome tanks entered in Fishforums' December 2022 Tank of the Month contest featuring tanks sized at 16 US gallons and smaller. View all the tanks and descriptions below and then go to poll at the top of this thread, click on your...
www.fishforums.net
Last edited: Nov 27, 2022
OP
OP

For winning POTM, Jaylach's pet will be added to our POTM Wall of Fame. Jaylach will also receive a banner signifying his POTM win. Congrats again, Jaylach.

Since I had nothing to do with Terrabit (sorry for the initial misspeling of Terabit) winning I will turn this over to him. He wishes to offer his sincere thanks for all that voted. He would have posted this himself but his typing is VERY hunt and 'PECK'. The two cichlids also want to offer thanks but I'm not really sure what they said as they kind of gurgle when they talk.

At first I was hesitant as to entering but it turned out to be a bit fun. Personally I really thought that @PewPewChris would win. How can you not love that face?

Don't be afraid to enter these contest as you never know what will happen.

Congrats Terabit on winning the POTM award and @jaylach for taking a great photo! 🏆

dascrow said:
Congrats Terabit on winning the POTM award and @jaylach for taking a great photo! 🏆

I would have voted, but I did not realize potm was running until today!
OP
OP

I would have voted, but I did not realize potm was running until today!
Click to expand...

Keep an eye out for the banners at the top of the forums to see which contest is running.

A gorgeous bird and wonderful photo of him and the cichlids

Thanks everyone!!
You must log in or register to reply here.