Just posting to introduce myself, I’m Theresa and I’ve had a few fish over the years but have never really got into the hobby.
Just after lockdown we bought our son an Oranda and stuck him in a 13gallon tank, surfice to say that he didn’t last longer than 18 months
My son (7) was beside himself with grief so we made up the tank again with new gravel substrate and plants Java fern, moss balls, grass and corkscrew vallisneria? and made a vow to only get small fishes in there.
The tanks been going for roughly three weeks, the different fish stores give different advice on cycling some say do water changes some say don’t…
We got the ammonia up to 3ppm etc and yesterday the tank read nh3 0 nitrite 0 and nitrate 80ppm
I changed out 25% of the water yesterday and today it’s reading .50 ammonia 0.50 nitrite and 40ppm nitrate.
Tap water has 20ppm nitrate.
We also have about 100 bladder snails and 2 Amano shrimp.
I’m panicking now that the shrimp won’t like the water but they actually seem pretty fine. 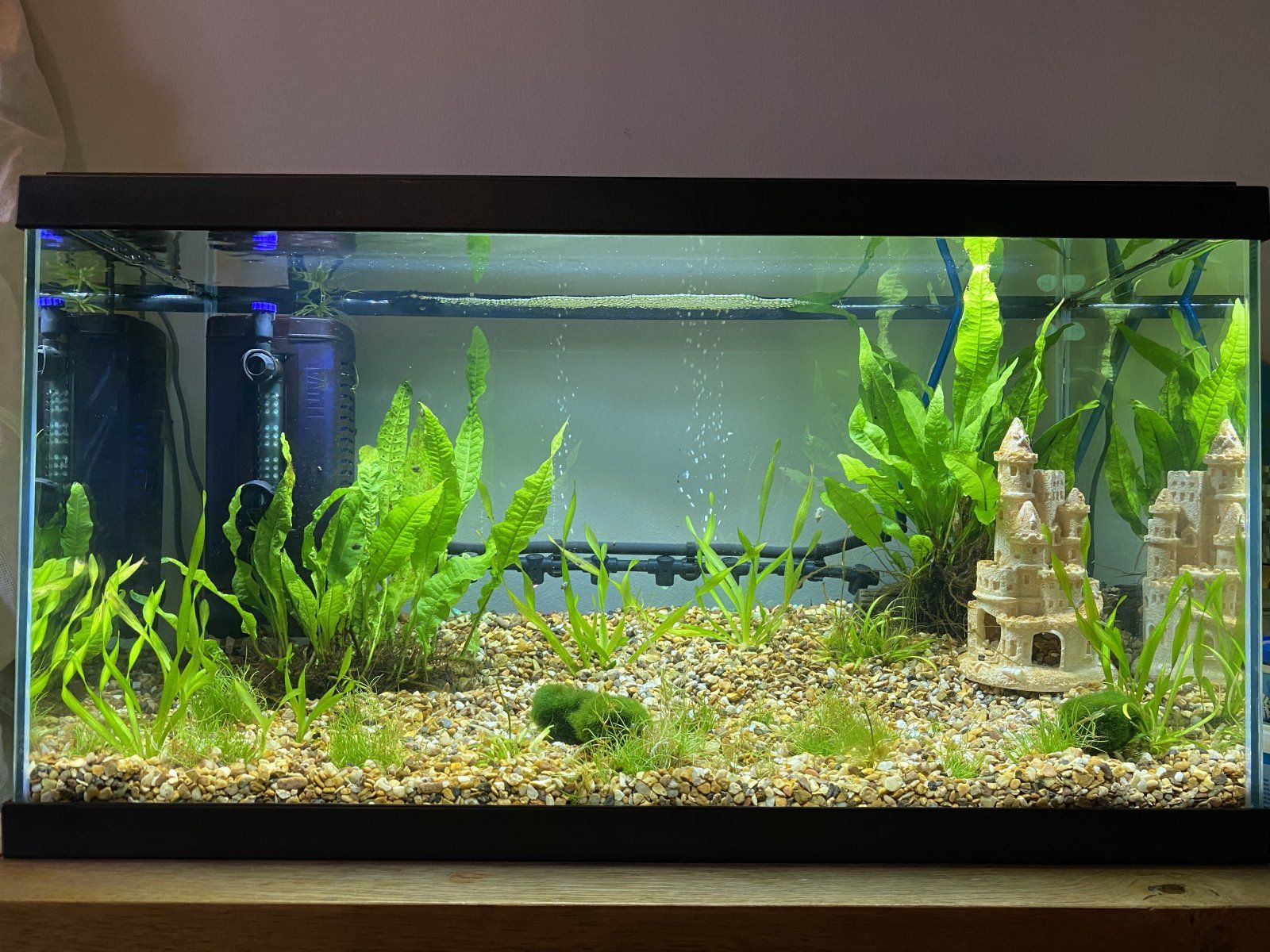 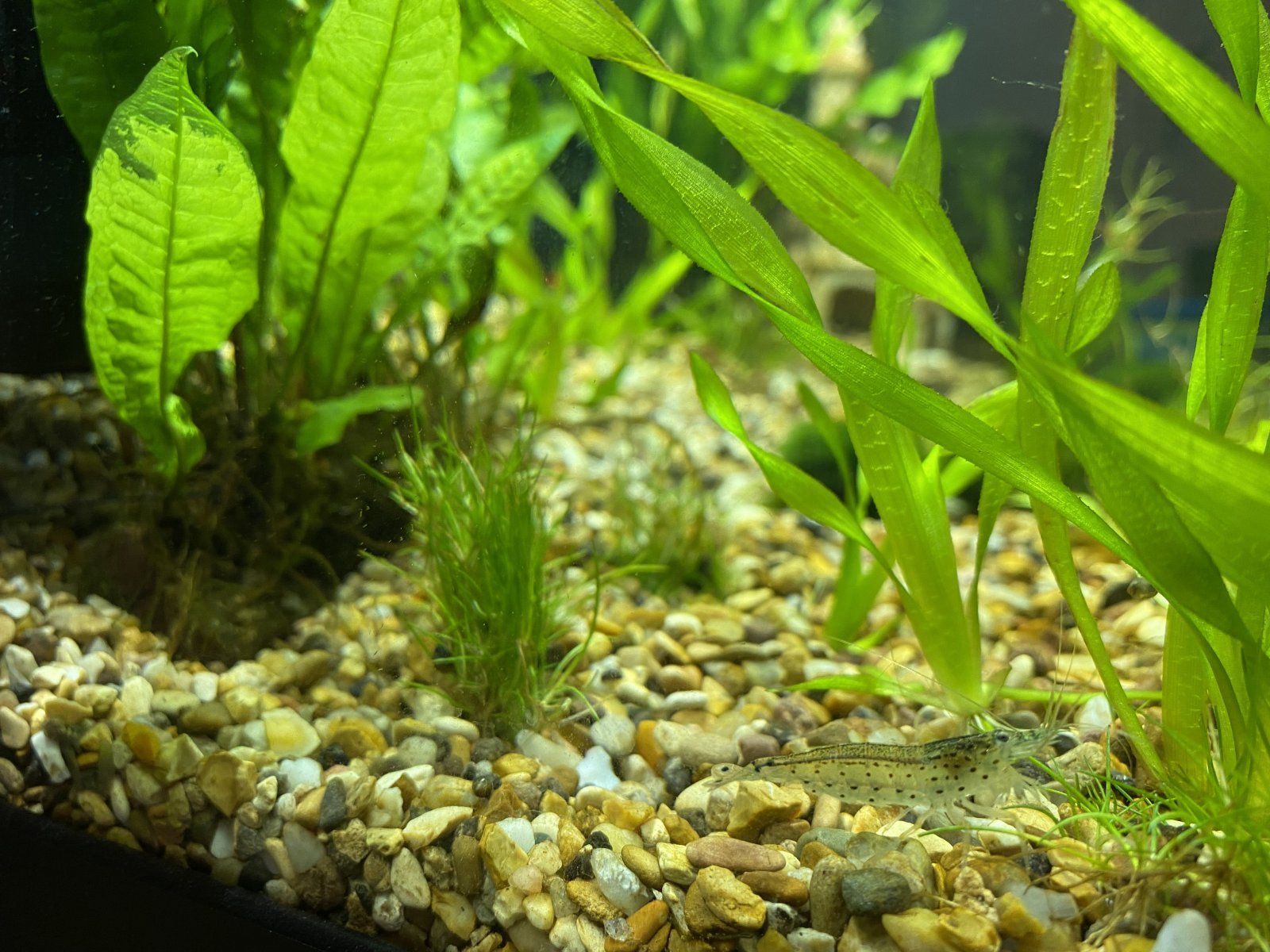 Yes deffo a fishless cycle… thought the tank was good to go yesterday after testing so got the 2 shrimp.. hope they’re ok can’t deal with killing off the family pets

Shrimp can tolerate a "bit" more ammonia than fish can, but still not ideal
OP
OP

No it’s not great.. just wondering if another water change would be beneficial less than 24 hours than the one before..

WetPetMum said:
No it’s not great.. just wondering if another water change would be beneficial less than 24 hours than the one before..
Click to expand...

Done properly, water changes never hurt...what kind of water conditioner do you have?

How long did you cycle the tank? What ammonia source did you use?
OP
OP

How long did you cycle the tank? What ammonia source did you use?
Click to expand...

I used food as a source of ammonia, tanks been going for 23 days, original filter and bio media used but new filter sponges inserted.

How long did you cycle the tank? What ammonia source did you use?
Click to expand...

Ps I use the pets at home tap safe

Welcome to the forum! I like all the plants and your shrimp!
I'm thinking about getting some Amanos myself once I upgrade
OP
OP

Rocky998 said:
Welcome to the forum! I like all the plants and your shrimp!
I'm thinking about getting some Amanos myself once I upgrade
Click to expand...

I would like four amanos they’re quite cute considering they’re shrimp thought we’d get two to start off with as I don’t have too much natural food in there for them. And we’re taking the whole set up very slowly the second time around

WetPetMum said:
Ps I use the pets at home tap safe
Click to expand...

Not familiar with that one...does your tap water contain chlorine, or chloramine?
OP
OP

Slaphppy7 said:
Not familiar with that one...does your tap water contain chlorine, or chloramine?
Click to expand...

It’s chlorine here, I checked when we had the goldfish

WetPetMum said:
I would like four amanos they’re quite cute considering they’re shrimp thought we’d get two to start off with as I don’t have too much natural food in there for them. And we’re taking the whole set up very slowly the second time around
Click to expand...

Yah that makes sense.
I have a lot of biofilm built up so I need a "clean up crew" lol. That's just my excuse, biofilm doesn't HAVE to be cleaned but I know that shrimps and snails like that stuff... They'll also eat up all the leftover food!

The tank I have now is also my second set up. I took this thing VERY slowly at first. Very good on your part to do the same.
It can take a bit to learn the nitrogen cycle and stuff. As well as setting the ecosystem up for the fish. It's a lot of work
Last edited: Sep 28, 2022

While the tale about the oranda is very sad, it's great to see that you want to learn from this and make sure to make it a good home for whatever fish you get in the future!

I'm not the greatest at cycling, but live plants can help a lot with getting a tank ready for fish. Love that you've used live plants! Only trouble is that most of the ones you have are pretty slow growing. Good beginner plants, but they don't grow fast enough to suck up ammonia the way a bunch of elodea/hornwort/guppy grass/water wisteria would. If you could get your hands on a couple of bunches of one of those, it would help things along and improve water quality once the fish are in there.
Warnings for beginners, especially when shopping for kids - I'm sure you've learned by now that goldfish of any sort not suite for a small tank like this.

I'd also recommend avoiding the livebearers. Guppies/platies/mollies/swordtails. The later two get too large for this size tank, and if you have females of any livebearing species, you're very quickly overwhelmed with fry that you won't be able to manage in a 13g, and means a lot of hassle in growing them out and rehoming them/finding a store to take them too. Male only guppy tanks can work, but pet store guppies tend to be sickly and carry disease often, and even under the best of circumstances, you're only likely to get a year or two before they pass, if you're lucky. So easily setting up a kid for heartbreak.

A warning about bettas/Siamese fighting fish too. Beautiful fish, suited to this size tank, more forgiving when it comes to water conditions and very popular with kids... but they're also not a very long-lived fish, and I'd say sick bettas make up a huge, disproportionate amount of the "Help! My fish is sick!" posts that we get here. If you decide you want a betta, try to get one with short fins, since they're much less likely to sustain fin damage that leads to infections, and not quite as overbred and interbred (yet) as their long-finned kin. Also worth seeking out a breeder via ebay or similar rather than a store and paying a bit more, rather than picking up an import from the store or certain ebay sellers.

Have you or your child had any ideas on what sort of stocking you'd like?
You must log in or register to reply here.