Good snails to clean the tank but look nice.

WhistlingBadger said:
I don't know of any snails that get 5"
Click to expand...

I thought I would add some additional information on Nerites. They are native to some river delta's They spend most of their life in fresh water and lay their eggs. However the eggs only hatch iand Juvenal snails only develop in brakishwater. So they don't bread in aquariums.

Depending on the amount of algae growth in your tank about 1 merit per 10 gallons is about right. To prevent shell erosion make sure the water is not acidic. A small amount of cursed coral in the filterwould prevent that from happening. Overtime it will eventually dissolve away so periodically you need to add more. In small tank it is about once a year. Also sharp or abrasive material in the substrate can scratch and afraid the shell tumbled or polished gravel is not abrasive while while love rocks black diamond blasting sand is.
For any type of snail Once the shell is damaged it will not heal and the color pattern is destroyed.

StevenF said:
A small amount of cursed coral in the filterwould prevent that from happening.
Click to expand...

I assume you mean crushed coral? I recommend against putting cursed anything in one's tanks. The exorcisms can get expensive.

Other than that, right on!

Btw, regarding the nerite snail, I have 3, one zebra, two horned, one of each color in three tanks. The differences between a fishless tank and this snail and a tank with fish and the snail are very visible on said snail. I moved a horned nerite from tank with rasboras to just shrimp tank, the foot of the snail was suddenly twice as long as before, and it has antennas, like 1cm long, longer than its body actually. After being a year in a tank which obviously didnt have enough algae, it didnt really grow, now after just a month or two in tank with lots of algae, it doubled in size.
The other horned nerite that is in the tank with the rasboras is always closed and almost the leg is fully hidden and the antennas are small and either not fully extended or bitten off. The last of my nerites, zebra, is 5 years old, around 4cm large and has 2cm long antennas, despite it being in tank with many tetras and corydoras. I kept moving it between my tanks in the past 5 years I have had it, and the key to not having them leave the tank is having space above the water level, where they can hang out on "dry land" but also having a lid. It will sit there for few hours and then go back in the water happy.

Fun snails, prone to dying upon purchase though 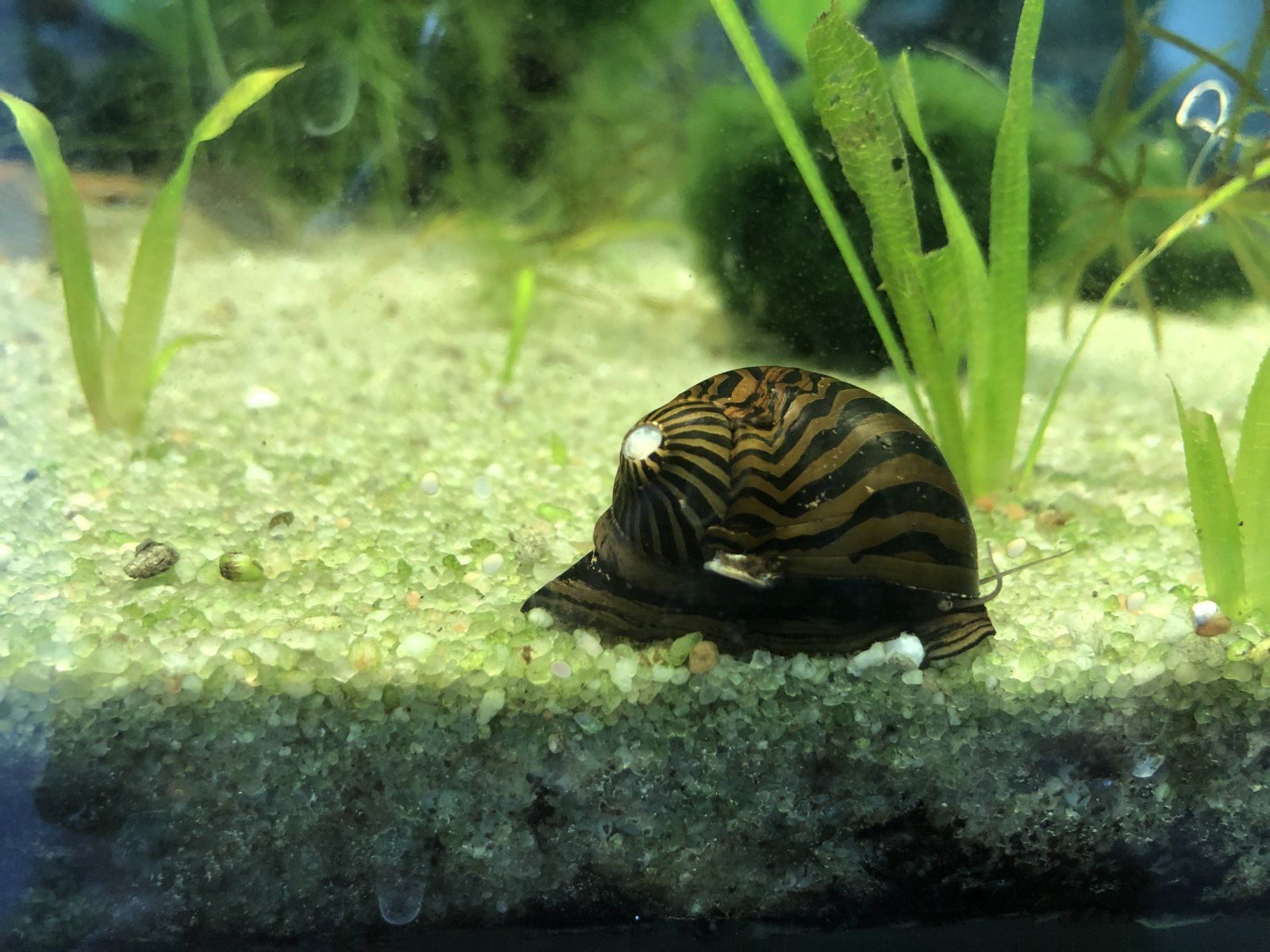 this is my zebra, she just posed, the shell aint pretty anymore but yo ucan so see some of the antenna
Last edited: Jul 26, 2022
S

My favorite are mystery snails. They lay a mass of eggs right at the upper level of the tank water, so if you don’t want baby snails simply remove the eggs. I let them hatch, and had lots of cute baby snails. My local store happily took batches as they got bigger over the next 8 months, letting me keep the bio load well controlled, maybe 150 in all. I’m down to the last three big ones. The original parents only lived a two or three months after the eggs appeared. They only live a year or so.
Nerite snails are nice, too. I have 3 in my tank. The only drawback to them is they lay lots of little white eggs that can’t hatch. That doesn’t bother me, but is a consideration.

The little white nerite specks all over my woodwork used to drive me crazy. Some people don't even notice them. Other than that, I love nerites.

Big Boy Fish said:
So I need to make some sort of list of snails that are fairly large, breed-able and look exotic.
Click to expand...

There are many beautiful nerite snails but be warned, if you get a female they will lay many little egg pods and they can be unsightly all over your aquarium driftwood and other decorations. Those egg pods are not easily scraped off. I bought four new rights nails and I kept them in separate containers until I saw them lay eggs and those snails I made sure I did not put in my big aquariums. They can live their life out here solo in their own little habitat.

Essjay said:
The pest ramshorns in my tank, the ones that came as hitchhikers on plants, have never grown bigger than 1/8 inch. There are bigger species though, usually the species you have buy.
Click to expand...

Mine have all been the ones that are hitchhikers and are half an inch as adults. I'd recommend mystery snails since they are pretty good at keeping the tank clean and as long as you have several they should breed with no help. They also get to be a decent size. My personal favorite snail type.

NoodleOfDanger0 said:
Mine have all been the ones that are hitchhikers and are half an inch as adults
Click to expand...

Mine have never grown that big, but there are many different species of planorbid snail so I may have a small species while you have a larger species
S

I recently bought a couple of Apple snails and they are brilliant.
Always busy and visible and very interesting to watch with the ability to breath under water or from the air via a snorkel type of tube that extends.
Also have the added bonus that they are too big for most fish to eat and breeding can be controlled as the lay eggs outside of the water which can then easily be removed.
They don't control my algae 100% but they have certainly slowed it right down.
They were banned when we were in the EU as the EU classes them as an invasive species but they now readily available.
They are one of my favourite additions to my tank!
C

Big Boy Fish said:
So I need to make some sort of list of snails that are fairly large, breed-able and look exotic. When i say breed-able i mean something that doesn't breed so I have to restart my tank because they took over I have made a list at the moment that. contains rabbit snails and ramshorn. Im going on the weekend to all the fish shops in the area.
Thank you if you actually help.
Click to expand...

Red Racer Nerites! Really beautiful and will only breed in brackish water. 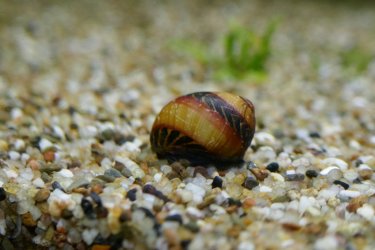 My plants are getting worse