🐠 August Fish of the Month Starts Now! Click to enter! 🏆

Maximum Size: Up to 12 inches, but wont normally exceed 8.5 inches in home aquariums

Origins: Various waters in Coloumbia and Venezuela and the Amazon

Care: A minimum tank of 100 US gallons is needed. Being a highly active fish, the bigger the tank the better. Allow plenty of open swimming space. This fish appreciates planted aqauriums and excellent filtration is needed as they produce large amounts of waste. Fast flowing waters replicate its natural habitat but a few "dead" areas not reached by powerheads are needed for a resting spot. Tempature should be stable between 75 and 85 degrees. The pH should remain between 6 and 7.5 but thrives in slightly acidic waters (around 6.7 pH). Requires high oxygen levels.

Feeding: The majority of the diet (about half) should be fish. Live fish are preferred but frozen silversides or other frozen fish are readily accepted. Be sure that if live fish are being used that they must be quaratined for at least 2 weeks and look healthy and disease free before being eaten. Also meaty foods like shrimp, earthworms, krill, and many other frozen or freeze dried foods are eaten. Once feeling comfortable, they will even eat carnivorus pellet foods.

Breeding: Breeding has yet to be accomplished in aquariums.

Comments: Two varieties exist: the "regular" silvery appearing one and the "Black Mask" (which I own) has a more darker apperance in the body.This mask is predominantly around the face and there is black coloration on all fins. I have also heard the black mask variety called the phantom elongatus. No tankmates for this species, not even other Serrasalmus elongatus. Use caution when handling or cleaning the aquarium as with all piranhas they may bite and their razor sharp teeth will inflict major damage. They are powerful and swift swimmers. They are finger chasers and most will chase hands outside of the aquarium. 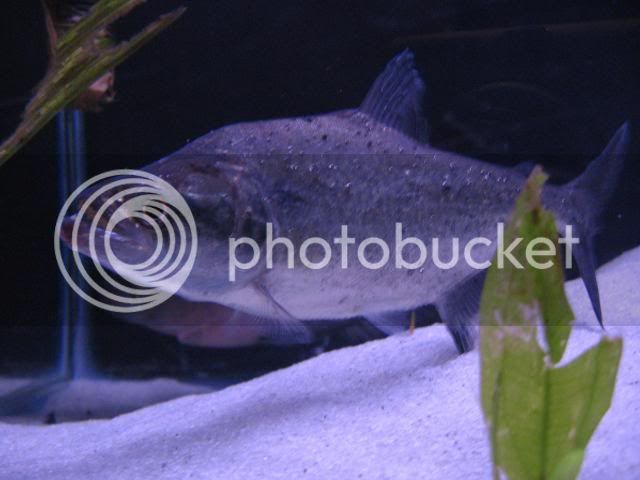 The above picture displays the black mask variety aka phantom elongatus.
You must log in or register to reply here.