I have 8 of these little beauties coming today. I had planned on adding them to my tank of similar size fish, ie Galaxy Rasboras, Ember Tetras, Rummynose, Emerald Dwarf Rasbora and Neon Tetra.
I'm having doubts now based on the water parameters. All the indicators show nil on nitrates, nitrites and ammonia levels but the PH is showing at 7.5%.
I could add peat either as actual peat, or as a liquid extract but I don't think that would be right for the other fish. I also think that the normal water changes would create problems by raising the ph again. My normal tap-water is at 7.5%

I have a spare 24ltr tank that I could shovel some substrate from my existing setup into, and a second filter that's also running in the existing tank which is fully conditioned. I'd rather the Chili's were all in the same tank with the other fish though.

Do you know your water GH?
OP
OP

Lajos_Detari said:
Do you know your water GH?
Click to expand...

I'm using the NT Labs kit for testing and I have to add 22 drops of the GH B bottle to bring it to the right colour. Don't know how that works out - perhaps 391 mg/L

That seems quite high for Chilis.

If those numbers are correct it is too high, and adding peat won't help. All of the fish you mentioned are soft water fish and would be much better off if you were able to mix 3 parts of RO water to 1 part of tap water.

You are in the Peterlee area, aren't you? Using a random address in Peterlee on Northumbrian Water's website says 'slightly hard' which means in the band 5.6 to 8.4 dH and 100 to 150 ppm.

Can I just check with you - the website says to add 2 drops of GH bottle A and shake, the water should turn pink. Then add bottle B 1 drop at a time, shaking after each drop, until the water turns blue. Is this exactly what you did?

It just seems odd that Northumbrian Water say your maximum hardness is 8.4 dH yet the tester gives 22 dH.
It might be worth giving Northumbrian Water a ring and ask them - another member did this recently though they had to wait to find out - they also said they had to explain what GH was before they got an answer.
OP
OP 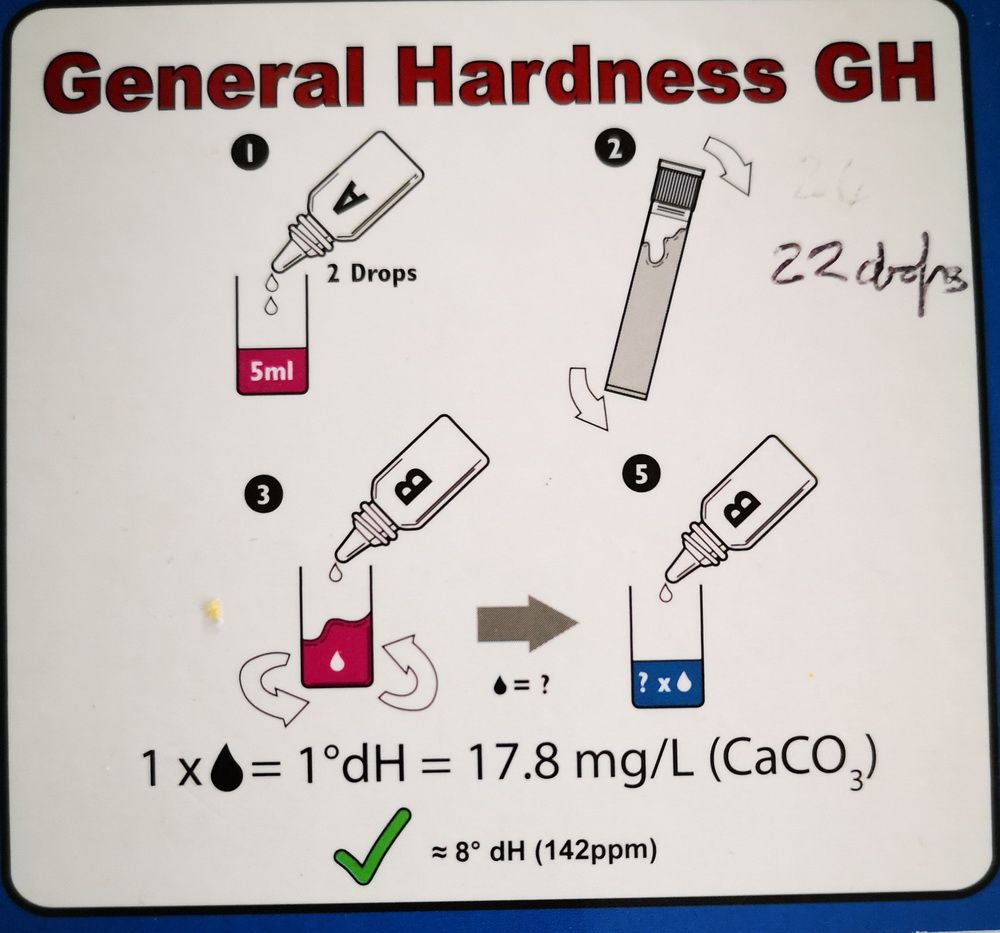 The method is add 2 drops A and shake the tube. Add B 1 drop at a time, shaking the tube after every drop. Count the drops of B. As soon as the water in the tube turns from pink to blue, the number of drops it took to make that change is the hardness in dH.


It just seems a bit odd that you say it took 22 drops of B to change from pink to blue but the water company says Peterlee's hardness is somewhere between 5.6 and 8.4 - in other words, using Northumberland Water's fugure, it should take somewhere between 5 and 9 drops of B.


Can you check on Northumbrian Water's website - enter your address here https://www.nwl.co.uk/check-your-area/ then after all the roadworks is the water quality information. The first blue box is your hardness in words. Unfortunately Northumbrian Water is one of only three water companies that don't give numbers so words will have to do. Tell us what those words are, please.
OP
OP

essjay said:
Can you check on Northumbrian Water's website - enter your address here https://www.nwl.co.uk/check-your-area/ then after all the roadworks is the water quality information. The first blue box is your hardness in words. Unfortunately Northumbrian Water is one of only three water companies that don't give numbers so words will have to do. Tell us what those words are, please.
Click to expand...

The link is for the water quality report which doesn't include hardness. But if the words say 'very hard' that means over 16.8 dH and 300 ppm which ties in with your test kit.

You need to soften your water for chili rasboras (and green rasboras and ember tetras) The only way to do this is by mixing tap water with RO water or by using all RO water with remineralisation salts added. Your 22 dH water mixed half and half with RO would give 11 dH, but that's still a bit too high. 1/3 tap and 2/3 RO would get it down to about 7 dH which should be OK.
OP
OP

Sounds very expensive?
I don't have the equipment for RO.
I guess I'll have to consider rainwater collection.
In the meantime I think I'll look at inexpensive bottled spring water. There must be some with a decent quality.

If you use bottled water, read the label as some have high calcium and magnesium (the hardness minerals). When you find one that's soft, make sure you use the same brandn all the time as they do vary in content.

Does your LFS not sell RO? Worth pricing it there, you may be pleasently surprised.
OP
OP

essjay said:
If you use bottled water, read the label as some have high calcium and magnesium (the hardness minerals). When you find one that's soft, make sure you use the same brandn all the time as they do vary in content.
Click to expand...

How about this one? Cheapest on sale at Tesco

15ppm nitrates off the bat.......about 1/2 the max for soft water fish iirc
You must log in or register to reply here.

B
Light to medium planted gravel tank, do i vacuum the gravel?

Today at 5:20 PM
brendonjw
B
D
Problem with Neon Tetra?