Tank Position: Virtually anywhere on the rockwork but giving a wide berth for growth

Care: Button polyps are very easy to care for. In fact, perhaps, too easy. The are in the softie family and contain the symbiotic algae zooxanthellae thus making them photosynthetic. These polyps are fast to expand and can quickly take over the rockwork. Mine actually came in as hitchhikers. They are very hardy and even if they seem like they have died off, don't be surprised if you see them spring up again. These polyps DO participate in coral wars. As they encroach on other polyps or corals, they can sting them to overtake territory on the reef. They enjoy moderate flow and moderate lighting and will exist anywhere they can take hold on the rockwork. The polyps in my system are mostly brown but have an orange fluorescence under PC lighting as you can just about see in the photos.

Feeding: Button polyps get most of their sustenance from photosynthesis. However, as you all know. they benefit from being fed. I have placed mysis and enriched brine on them from time to time and the polyps DO close up on it.

Propagation: These polyps grow or extend by budding. They split off segments that develop into new polyps. Hence, their rapid growth and ability to take over areas of LR.

Fragging: Fragging is easy. You can simply cut off a polyp and affix it to a piece of LR or simply break off a piece of LR that several polyps are attached to.

CAUTION: Button polyps, being members of the Zoanthus sp. secrete a deadly substance which is poisonous (palyotoxin). USE GLOVES when handling them and wash your hands afterwards. DO NOT PUT YOUR HANDS TO YOUR MOUTH, EYES OR OTHER MUCUS MEMBRANE after handling them. 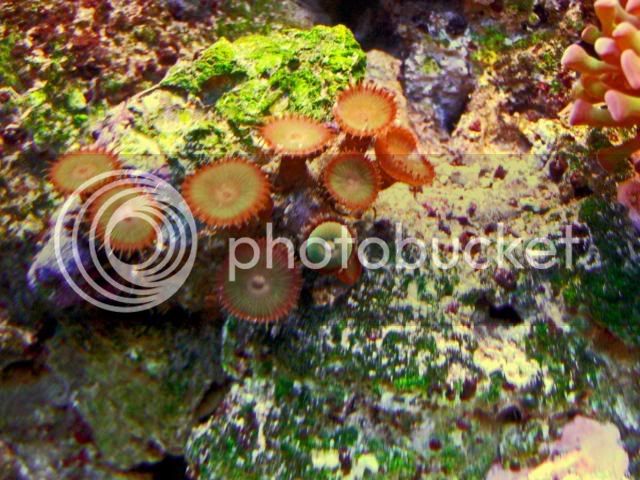 You can see one of them actually looks like a button.
You must log in or register to reply here.