Care: Open brain corals have some of the best colors I have seen. Under actinic lighting, these corals fluoresce wonderfully (the picture below is unretouched). I first thought they were fake when I saw them at the lfs. They are a relatively hardy species of LPS coral given the right lighting. They must be placed on the substrate to keep their tissues from being lacerated on the edges of LR. Their corallite skeleton is delicate so lift it gently from the bottom. Avoid strong water current as this my uplift it or damage the tissue.

This coral has very short tentacles which can be seen extended at night. Although not long in length, they can sting neighboring corals if the open brain coral is placed too close to others.

Feeding: Trachyphyllia brains are photosynthetic as they contain the symbiotic algae called zooxanthellae. However, they do acquire zooplankton in real life and should be given the same treatment in the aquarium. Without it, they can starve over time. At night, it can be spot fed baby brine shrimp, Cyclopeeze, enriched brine shrimp, mysid shrimp or other small plankton, 1-2X per week.

Propagation: There are reports of trachyphyllia reproducing by producing small 'daughter' polyps. Many brains can be cut into coral frags. It does however put stress on the coral. Trachyphyllia is difficult to frag however. Trying to break about the lobes that have one feeding mouth can easily kill them. You must be very careful. One reported method is to cut this coral on a band saw.You could use a tile cutting bit on a Dremel. The saved portion does not need to have a mouth on the polyp to survive. 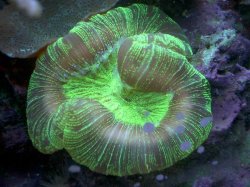