Care: These are a lovely colourful addition to any saltwater aquarium, they will graze on filamentous microalgae and small macro algae if underfed. They may be kept on their own, in a pair or in a group, they ten to be aggressive towards other tangs but are good community fish. They require a 75+ gallon aquarium to provide them with plenty of space to swim, they also tend to be more aggressive in smaller tanks. This fish prefers a temperature from 72 to 78°F, a S.G. of 1.020 to 1.025, a pH from 8.1 to 8.4 and a dKH from 8 to 12. This is much more hardy species than the likes of Regal and Powder Blue Tangs.

Feeding: Omnivore. Needs fed a varied diet of vegetable matter and meaty foods. They will accept dried and frozen omnivorous foods, supplements may include spirulina, zucchini, broccoli, lettuce and dried seaweed. Dried seaweed should be offerd at least 3 times a week to keep it in good health. Optimal diet also includes multiple smaller feedings per day. Autofeeders are helpful in this regard.

Breeding: Very difficult. Key signs of spawning are a colour change from deep blue to light blue at the front half of the fish and darker blue at the back. Males will aggressively court any females in the group. The egg and sperm are released, mix together and will float to the surface. The eggs are about 1mm in diameter and should hatch in about 24 hours.

Comments: Acanthurus coeruleus go through three development phases; firstly is the juvenile phase when the fish is bright yellow with some blue areas developing after a while around their eyes and at the top edge of their dorsal and at the bottom along their anal fin. The next stage they become a mixture of dark yellow, grey and blue with a lighter yellow caudal fin, they will also develop grey and brown vertical bands along their body. In the final adult phase they become a deep blue/purple with a yellow mark at their caudal fin. The change from juvenile to adult does not depend on size, so you may come across some yellow juveniles that are larger than a blue adult.

Caution: These fish have spines along their caudal fin, and can cut humans if not handled carefully.

Moderator's note: Until the original poster's Tang ages enough for later phase coloration, anyone with an extra picture of the adult stage could please post here or contact a moderator, that would be great.

Horizontal bands developing along the body. 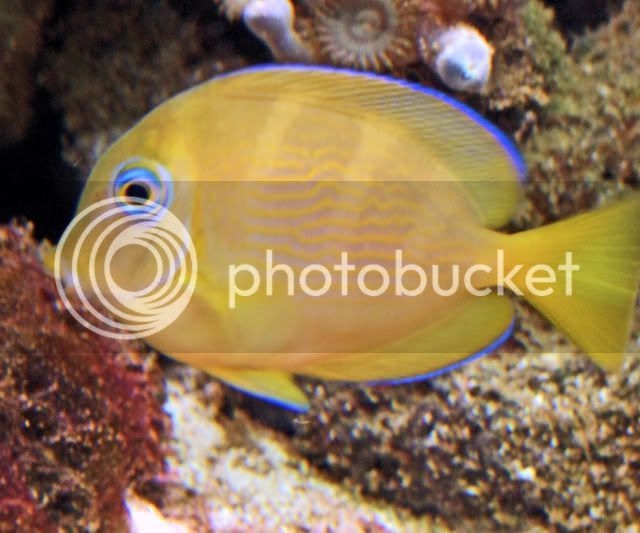