I got home from work early this evening. Decided I would grab a beer and just sit in front of my tank and watch the neons go crazy because they think it’s dinner time.

Upon looking closely at my Christmas moss, I noticed the Centers of the plants were starting to look very fuzzy, and bright green. Definitely some algae or possibly blue green algae growing there.

I have done a bit of homework on algae, but by no means an expert.

it was the worst on the top of the driftwood closest to the light, go figure, haha.

I removed the top two golf ball sized Christmas moss plants, it’s hard the grab just algae with the tweezers on those plants.

the algae at first appeared to be slimey, but when I compare it to videos I’ve watched on the internet, I would say it’s more stringy than slimy.

it also didn’t pull away from the small leaved plants very well. Larger sections did of course separate from itself, it is pretty well imbedded in the moss.

I found some similar looking algae growth on the driftwood, and did a scrape test on it, and it breaks away freely into pieces, does not come apart as one piece or Ali that would typically be seen with blue-green algae.

Does this mean I don’t have blue-green algae? Absolutely not, as I don’t know for sure I’m not inspecting two different things here.

In the meantime, I’ve learned that putting some of the “algae” into a container and leaving it for 24 hours can let you know if it’s bacteria or algae. For example, if you have blue green algae, which is a bacteria, that sample you placed in the container should have a noticeable green “glow” for lack of a better word, around it which would be indicative of bacteria growth.

I have done that for now. I’ll check on it tomorrow and share results. 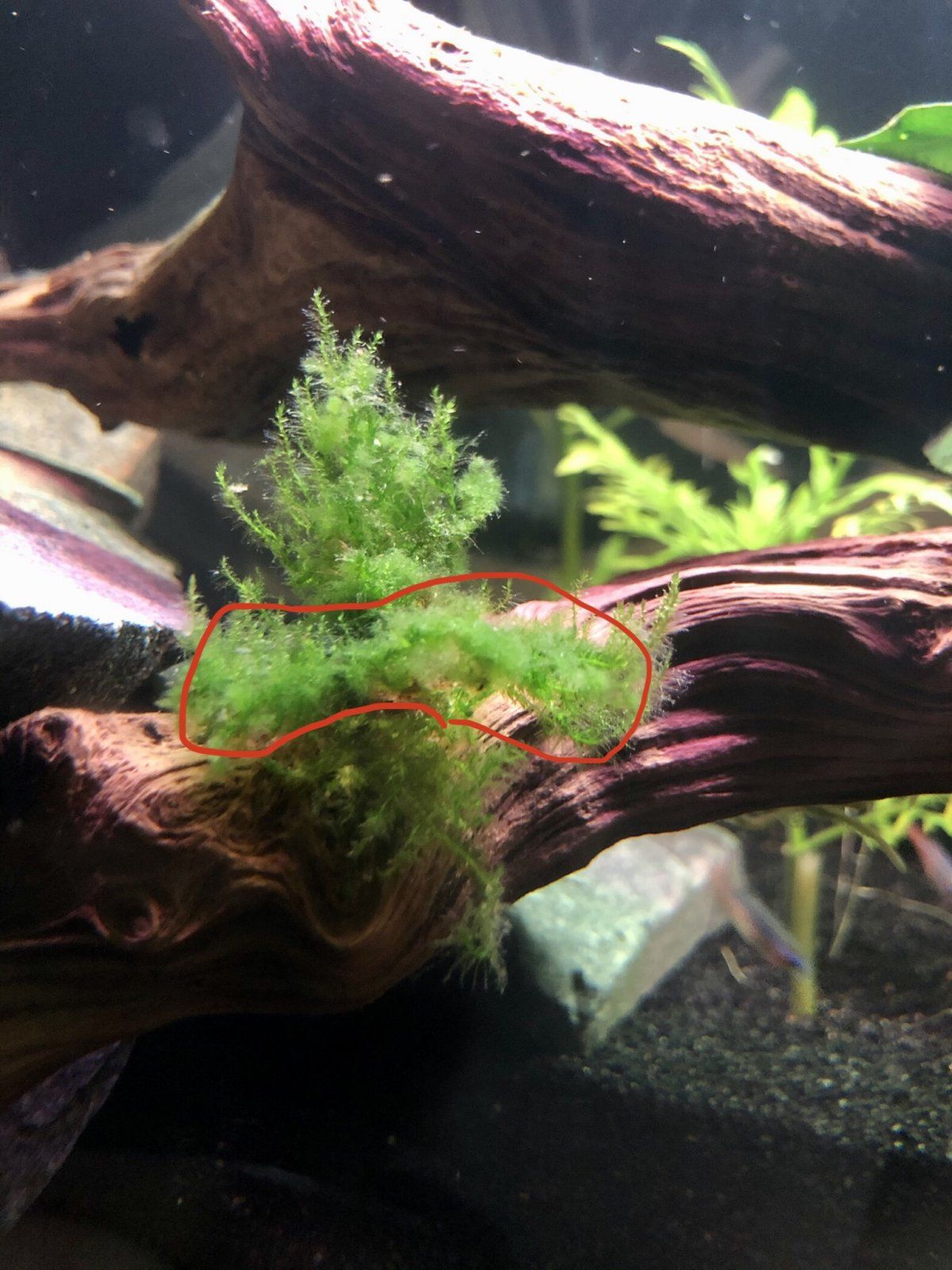 This is still an immature tank, so I’m expecting algae growth and i already visible have a few different kinds that I can see, I just basically want to check this particular one out. Make sure it’s not blue-green algae, as I live in Canada and don’t have much access to bacteria fighting meds. Last time I did treat trying to help my fish, I lost some of my good bacteria and had to cycle my tank again.

Any help would be greatly appreciated. And I took dozens of pictures, that’s the best one I got. I’m going to tag a few people here, but anyone else, if you know someone else I don’t that can weigh in, bring them along.

Looks to be hair algae.

How long is your light on?
OP
OP

How long is your light on?
Click to expand...

That was my initial thoughts... so while I do some additional research, I wanted to include everyone here as part of the R&D.

I’ve got the light timing listed in OP, lights right now are 11hours/day.

if it’s indeed hair algae, I’m not terribly concerned and I’ve already been contemplating a shorter light cycle, not doing anything about it tonight, my boy is asleep right now and the tank is in his room.

I have to check the instructions on my power bar, I’m running a coral life digital timed bar, I’m not sure if I can or want to do two blocks of time.

should I switch right down to 8 hours? Or would stepping it down gradually work as well?

my plants are all showing signs of growth, I’m even getting a new anubias leaf which is surprising as they are known to be slow growers.
Algae appears to be growing slowly, I think in part because the plants are doing well, but still time to intervene sooner than later.

As long as it’s not blue-green algae, but we’ll see how my little science experiment goes.

I have to think you’re right.

I don’t think I’ll go down to 8 straight away though. Algae I have has taken a long time to develop, and I’m not terribly displeased with it. In all honesty, I don’t mind it too much.

the nerites are going to town on anything on the glass and the anubias leaves, you can see the leaves they choose to clean.

Due to my work schedule and family life, going to 8 hours will impact my tank viewing time. So I will compromise and go to 9 hours starting tomorrow night. Monitor from there.

Well maybe I will do that then.

the tank is never exposed to direct sunlight, and the room has some heavy dark curtains that never open, so no need to really follow any natural day time.
You must log in or register to reply here.