Care: I have found the Bentosi white tip a hardy and easy to care for schooling fish, with similar needs to their close relation, the Rosy Tetra (Hyphessobrycon bentosi rosaceous). As a schooling Tetra, they need to be kept in groups of at least five or six to fully appreciate their impressive social displays. Sufficient planted areas should be provided around the sides and rear of tank for hiding when resting, and free swimming space in the centre. A small current also mimics the natural environment of this fish.

Feeding: My Bentosi become quite excitable at feeding time, but rarely have the nerve to compete with Danio, or other fast swimming surface feeders. They prefer to snatch and run with anything that drops to mid-water, even if it is too big for their mouth! They happily take flake food, but love live foods as an occasional treat, especially daphnia, mosquito larva and bloodworm. I have also observed them sneaking up and picking at the seeded part of a cucumber slice (when my female Ram is not guarding it!)

Breeding: I haven’t personally bred this fish yet, but understand that a mating pair should be separated and introduced into a breeding tank (approx 10 gallons) and the water temperature should be 75-79F (24-26 C), with the PH slightly acidic and water hardness of 4dH or less. Fine leafed plants should be provided, on which the eggs will be laid. A calm current, and low lighting will mirror their natural environment. The parent fish should be removed before the eggs hatch. The fry hatch usually after 24 hours and are free swimming within a few days. Start feeding micro-organisms once the egg sacs have been consumed, and crushed flake can be fed after 10 days. Weekly partial water changes are beneficial to the fry.

Comments: I have personally never found the White Tip to be fin nippers (as their close cousins are often renowned to be) neither do they truly "shoal" except during times of unease, or when feeding. Though they are not constant swimmers - often preferring to hang around a favourite rock or piece of driftwood when relaxed - these little fish are rarely still; They seem to constantly flicker and shiver.

I live in London, with a fair choice of LFS locally, yet I have found this fish on sale in only one. Initially (before I owned and researched the species) I did wonder if I was buying a re-labelled Rosy Tetra. Only when the same fish store place the Rosy tetra in an adjoining tank to the White Tip did the subtle differences become more evident. Though some (but not all) of the White Tip had the same "Black Flag" colouration to the dorsal fin (that earned the Rosy the common name "Belgian Black Flag") the Rosys did not have the white extensions to the pelvic fins. I do not own Rosys, so do not know how they would "colour up" in my tank, but with the Bentosi Bentosi, they were initially paler than the Bentosi Rosacious at the fish store, but developed a wonderful salmon pink colour once introduced to my tank, pinker (yet more translucent) than the Rosys in the fish store!

All in all, a shy, peaceful, wonderful and impressive looking fish, whose fins are almost always fully extended in my experience, except during moments of madness when they dart around the tank! A great compliment to any community tank!

Thanks for this info.
Will White Tipped Bentosi Tetras school with Rosy Tetras?

Jimmyfromhudds said:
Thanks for this info.
Will White Tipped Bentosi Tetras school with Rosy Tetras?
Click to expand...

In the sense you probably mean, no. This takes a bit of explaining.

Freshwater fish species that live in groups are best termed shoaling rather than schooling. The latter term is better applied to marine species which not only live in groups but feed (hunt) as a unit. Very few (if any) freshwater fish do this. Shoaling means the species needs a decent-sized group for any number of reasons, from security to communication to establishing an hierarchy, etc. The fish may or may not remain together in the aquarium, unless it is very large, but they beenefit from being among others of their species. Rummynose tetras and many rasboras will "swim" together more than most shoaling fish in the aquarium. Angelfish tend to remain reasonably close.

One thing we do know is that the more of a species there are, the less stress to the individual fish. When numbers are too few, the fish will be under stress, and this can cause all sorts of problems.

Bentosi Tetras (species is Hyphessobrycon bentosi) require a group of their own, and this species is better with more than the usual "six" suggested; a group of 9-12 is ideal if the tank space is adequate. Same holds for the Rosy Tetra, Hyphessobrycon rosaceus. These two species are very closely related because they descended from the same ancestor. So if numbers of either species are too few, they would likely spend more time with each other (the two species together, sort of).

Adding in the picture .. as the earlier picture cant be viewed. 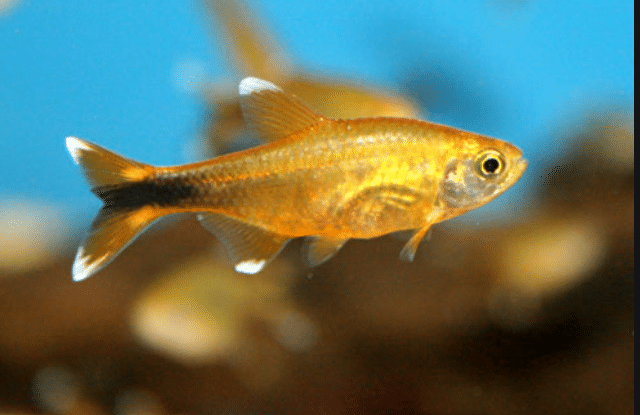