Here are three of nine errors found by Mr Justice Burton when he ruled in the High Court that the film cannot be shown in schools without prior discussion about how one sided it is:


The above is from this BBC story.

The first mistake made by Mr Gore, said Mr Justice Burton in his written judgment, was in talking about the potential devastation wrought by a rise in sea levels caused by the melting of ice caps.

The claim that sea levels could rise by 20ft “in the near future” was dismissed as “distinctly alarmist”. Such a rise would take place “only after, and over, millennia”.

Mr Justice Burton added: “The armageddon scenario he predicts, insofar as it suggests that sea level rises of seven metres might occur in the immediate future, is not in line with the scientific consensus.”

A claim that atolls in the Pacific had already been evacuated was supported by “no evidence”, while to suggest that two graphs showing carbon dioxide levels and temperatures over the last 650,000 years were an “exact fit” overstated the case.

Mr Gore’s suggestion that the Gulf Stream, that warms up the Atlantic ocean, would shut down was contradicted by the International Panel on Climate Change’s assessment that it was “very unlikely” to happen.

The drying of Lake Chad, the loss of Mount Kilimanjaro’s snows and Hurricane Katrina were all blamed by Mr Gore on climate change but the judge said the scientific community had been unable to find evidence to prove there was a direct link.

The drying of Lake Chad, the judge said, was “far more likely to result from other factors, such as population increase and overgrazing, and regional climate variability”. The melting of snow on Mt Kilimanjaro was “mainly attributable to human-induced climate change”.

The judge also said there was no proof to support a claim that polar bears were drowning while searching for icy habitats melted by global warming. The only drowned polar bears the court was aware of were four that died following a storm.

Similarly, the judge took issue with the former Vice-President of the United States for attributing coral bleaching to climate change. Separating the direct impacts of climate change and other factors was difficult, the judgment concluded.
Click to expand...

For those of you who want a more brief summary, regard this image from This is London 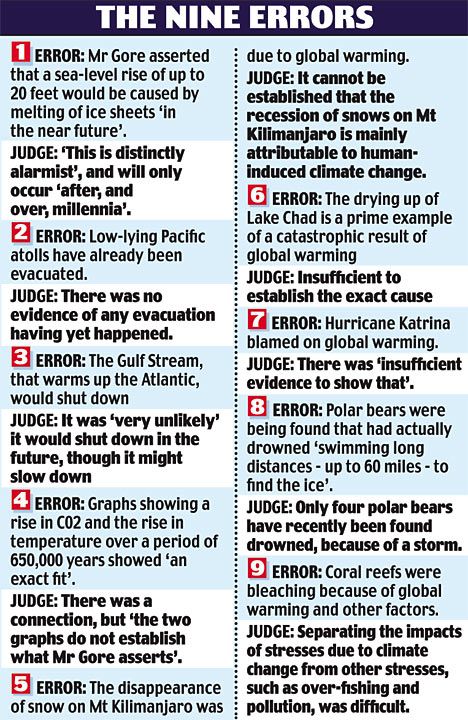 However, the Times does conclude:

Despite finding nine significant errors the judge said many of the claims made by the film were fully backed up by the weight of science. He identified “four main scientific hypotheses, each of which is very well supported by research published in respected, peer-reviewed journals and accords with the latest conclusions of the IPCC”.

In particular, he agreed with the main thrust of Mr Gore’s arguments: “That climate change is mainly attributable to man-made emissions of carbon dioxide, methane and nitrous oxide (‘greenhouse gases’).”

The other three main points accepted by the judge were that global temperatures are rising and are likely to continue to rise, that climate change will cause serious damage if left unchecked, and that it is entirely possible for governments and individuals to reduce its impacts.
Click to expand...

So it is not like he got everything wrong, and the legal case over here mostly focused on the fact that he was presenting his own beliefs as scientific fact in a video which was sent to be shown at schools.

The movie is political propaganda; nothing more. Very little science in the film in my opinion.
OP
C

Colin_T said:
The politicians need to spend more time making decisions rather than just arguing over them.
Click to expand...

I completely agree with that.

Hillary vs. Obama
My favorite part of al gore movie was when he show the north pole with the sun beating directly on it

The movie is political propaganda; nothing more. Very little science in the film in my opinion.
Click to expand...

It was political propaganda. I never really believed in "global warming" to begin with. I've had my knowledge to back up my thoughts, but those 35 errors can really help me now.

Not to offend anyone, but the USA is crap when it comes to things like this. I've already had to watch "An Inconvinient Truth" twice in school.

I got off with one. I narrowly missed having to see it a second time.

I had it easy this year. Unfortunately, though, a group of my friends, similarly skeptical of man-made global warming, were given a class assignment that involved providing dangers of global warming and what we could do to prevent it, after being shown An Inconvenient Truth. They proceeded to provide reasons for scepticism instead, and were told to change their views or face failure of the class. The teacher's logic for this decision was circular; i.e., "evidence for an anthropogenic global warming is so overwhelming and omnipresent that I don't even have to cite it".

What a joke. Actually, what a shame. We can only hope people in positions of real power aren't so blinded.

However, the hydrogen cars I've been hearing about are truly a step in the right direction in my opinion, probably brought on at least partially by AGW scares.

Lynden said:
They proceeded to provide reasons for scepticism instead, and were told to change their views or face failure of the class. The teacher's logic for this decision was circular; i.e., "evidence for an anthropogenic global warming is so overwhelming and omnipresent that I don't even have to cite it".
Click to expand...

That's what is happening at my school. So I acted like I believed it, but I gave the stupidest answers I could come up with. I said something to the affect of getting rid of all animals that produce methane gases. I dunno, passed the class with a B though!

G
what is this thing that is affecting my fish?

Hole in the Head?