Care: Care is similar to that of other members of the genus. It needs very heavy filtration, some hiding spots, and no sharp décor that they can injure themselves on. Piranhas (especially Serrasalmus) are very skittish fish and if startled may injure themselves on sharp decor.

Feeding: As with most piranhas, they are heavily piscivourous and the bulk of their diet should be fish. Frozen food is almost always accepted although it may take some coaxing for them to take it. Some good foods to feed are frozen silversides, prawns, krill, beefheart (occasionally), worms, and squid. Some people have had success getting these fish to eat pellets, however, this is not always the case. Try to avoid feeding much mammalian meat (beef, mice). If you must feed live food, be sure to quarantine the fish or invertebrates first. As always, never feed goldfish or other fish containing high levels of thiaminase.

Breeding: Unknown in captivity, but likely similar to other Serrasalmus. Simulated dry and wet seasons seem to be the most important things in getting Serras to spawn.

Notes: As with all piranhas and piranha like fish, this fish has very sharp dentition. Be very careful while working in the tank. Know where the piranha is, don't stick your appendages into places you can't see, and do not aggravate it. Its teeth are not just for show. I have had the unpleasant experience of being bitten. It was not fun to say the least. Even though it was a smaller specimen (about 5 inches) it still left a nice little outline of its teeth. This was about 3 months ago and there is still a scar.

Also, as mentioned before piranhas are very skittish fish and are not the famed man killer they are thought to be. Many piranhas end up back at the fish store a few days after being purchased because they were "too sissy" or "it wasn't aggressive enough". Do not buy if you are in search of a bloodthirsty killer. You will be disappointed.

Editors note: Many aquarists report trouble keeping multiple of these fish together in the same aquarium. They tend to quarrel with each other ultimately till one individual is either killed or succumbs to disease from being weakened through aggression. Tanks in the multiple hundreds of gallons are reccomended if keeping multiples. 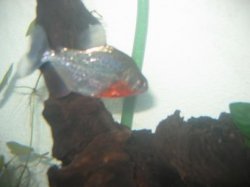