Hairy_Trev said:
OK.... so.. further developments... I'd explained before that the original male/female pair didn't work out with her demise... so bought two more larger females, with much deeper purple colouring in the belly.. to give him the choice of partner...
Things became much more active after that and showed some quivering and courtship behaviour, but also some squabbles, so I made a guess at which of the ladies he'd chosen and removed the other... BIG MISTAKE.... suddenly it all went very quiet again so I returned them to make up the threesome... squabbles again... took her out again.. went quiet again..
I did this several times with the same results, and finally decided to give uyp the idea for now and removed the original male to keep the peace... lo and behold... the two remaining purple belly females began to be more active, investigating caves and excavating a nest. Closer inspection of the dorsal shows clearly they are a male and female!!!
Yesterday, I got home from work and found they'd also started to tunnel for freedom, digging out all the sand from behind their cave but apparently they do like to move their offspring into a hollow... are they preparing for a larger home?
Last night they finaly seemed to get it on and I could see the female swim into the cave, and then turn upside down to swim slowly out.. the male then following with the same actions... I presume to slowly lag eggs along the roof of the cave.
I left them to it and this morning things seem to have gone quieter now, he's mostly staying in the cave and she's quietly cruising the tank again...
If it's 2 days for them to hatch as I've heard, then I could be looking to receive lots of nice new presents on this written off Christmas period!!!!

Best wishes to all, and have a wonderful festive season!
Click to expand...

Well, it's been a week since I saw the Kribs appear to be spawning and since then, one of the pair has always been sitting inside the pot cave, while their digging activities have totally ruined the appearance of that corner of the tank... (They managed to excavate all the sand, right down to the glass and dump piles of spoil across the front!!)

After a week with no further great changes in behaviour, I tentatively took a look inside the pot, and sadly no sign of eggs. Ah well... it was their first attempt and it takes time to learn so I've now moved the pot a little to somewhere less destructive, smoothed out all the sand and will leave them to have another go...

I've heard they are often ready to spawn again within a couple of weeks so I'll keep an eye on them!

`OK... more developments.... having convinced myself that I now have a M/F pair, and the third (original fish) is male and relocated, they failed to produce babies at their first attempt, but showed clear indications that they'd read the mating instruction manual.
I explained how I moved the pot to somewhere they'd cause less destruxtion and they chose to ignore it completely. So, having repaired their vandalism, the pot was moved back to it's original place and within a day, they again showed interest and soon showed the same spawning activity, swimming across the roof to lay eggs. Unfortunately, the angle of the pot and the detritus placed infront makes it impossible to clarly see in there, but I did notice that one of the fish swam out of the pot, still with 2 or 3 eggs stuck to her(?) belly. This raised some doubts in my mind as I'd been convinced that was a him... is it posible that while he was swmming upside down to fertilize the eggs, he dislodged some and they stuck to him? Anyway, A week passed since, again with no sign of babies, but I'm sure they're pretty determined.
A thrd attempt by our loving couple on Sunday evening (17th Jan) saw them being unco-operative and they could be clearly seen to be alternating in swimming down BEHIND the cave out of view... first one fish disappearing for a few moments before re-emerging and the second fish following on. This continued for several hours and the following morning, things were quiet again, with a notable sentry presence in that area of the tank.
Returning home on Monday evening found them having a damn good fisticuffs for half an hour, and they are now avoiding each other. Wendnesday afternoon, I've noticed the colours seem much more faded, and he is showing his tail fin to have been very badly nipped, almost totally gone in the scuffles

Hopewfully this is just a lover's tiff and they will make peace and babies!!
I'm going to try to remember how to upload some film of them, but also will chuck a couple of phots here if I can.. 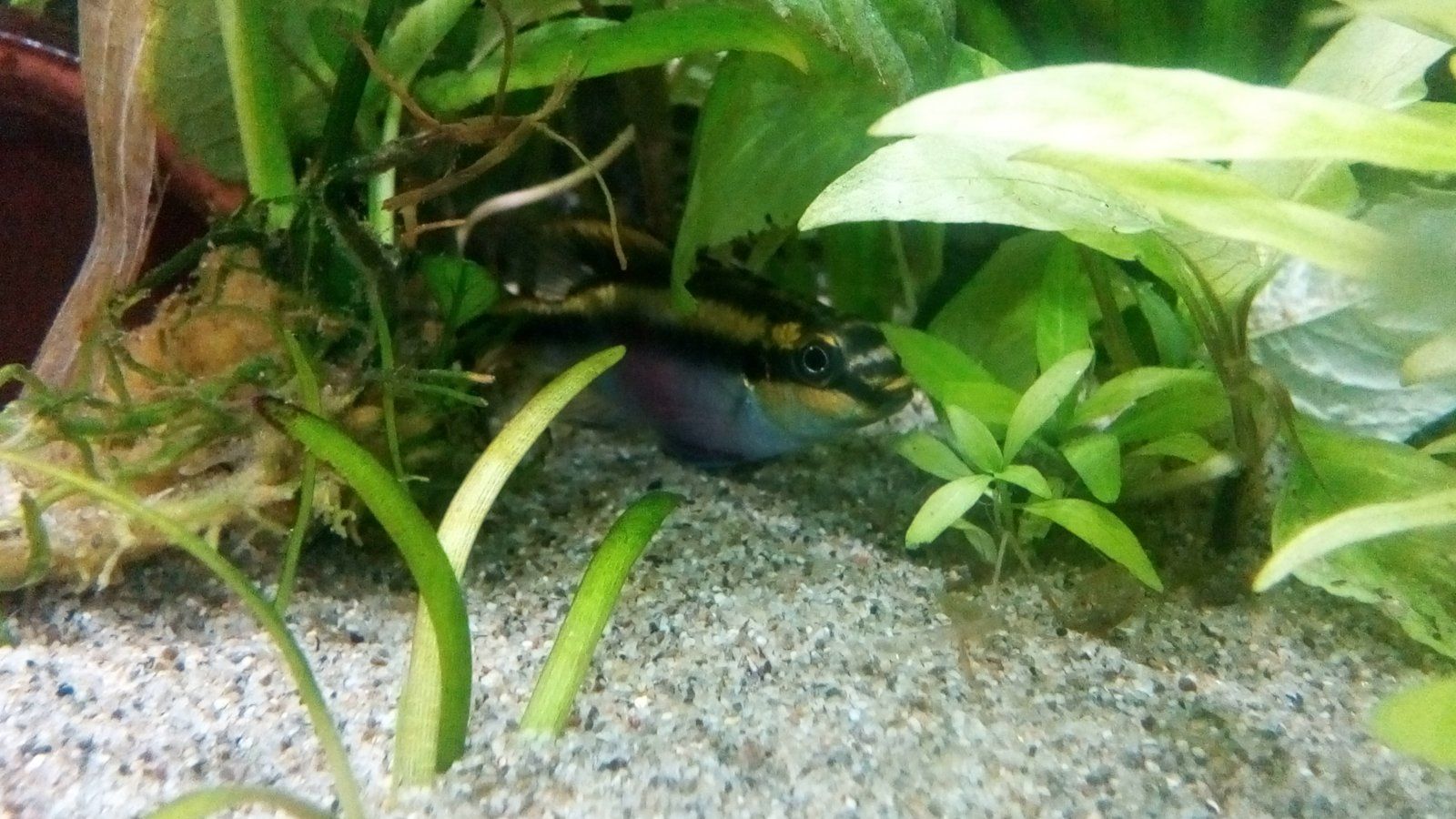 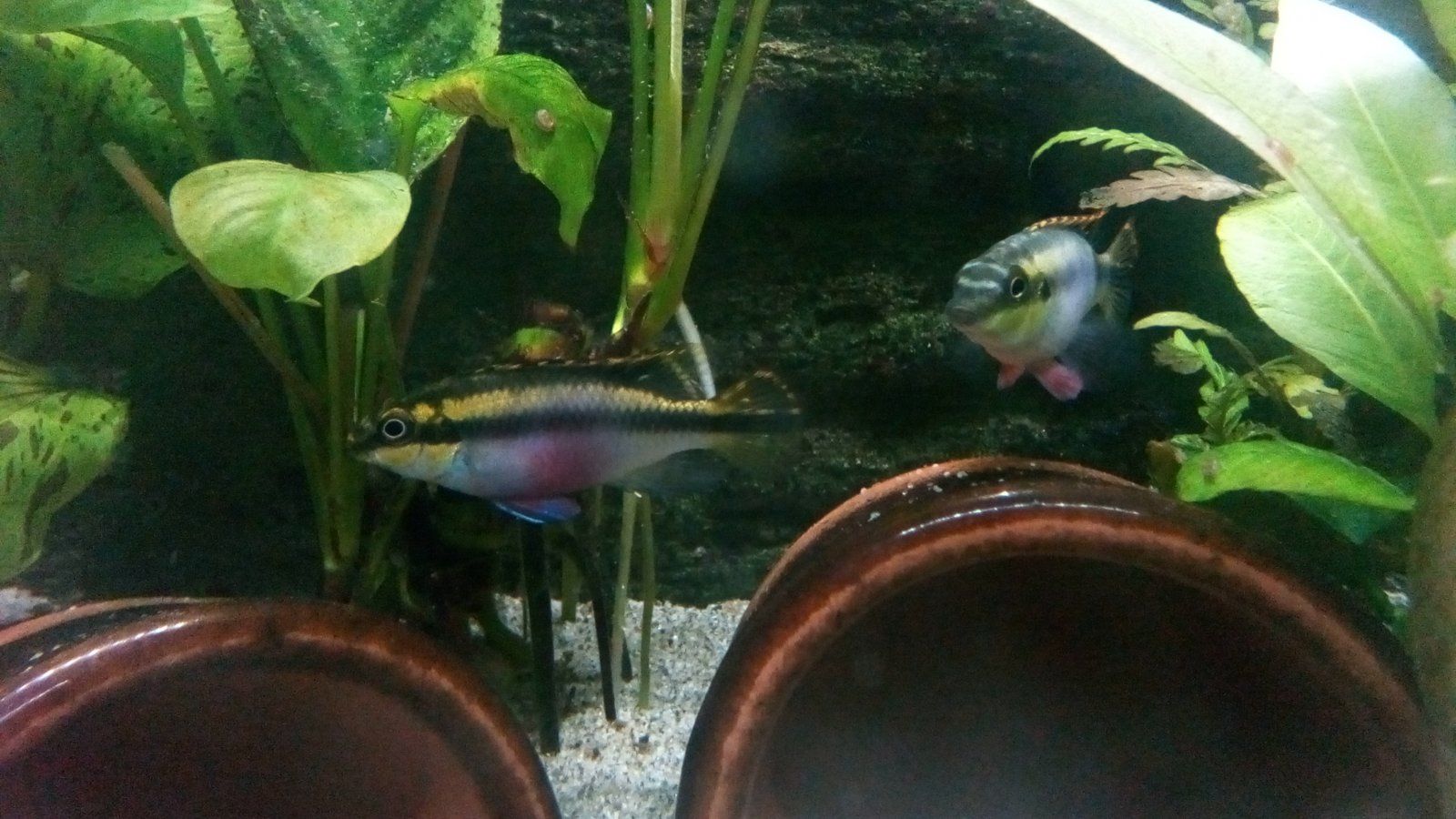 Let's see if this works.. trying to upload some film...

M
Will a Bolivian Ram starve itself to death before it eats food floating in front of it?