Maximum size: Too large for home aquaria; over 4 feet long and almost 100lbs

Care: This catfish is not suitable for home aquaria. I'm placing this post here to help warn others about purchasing this fish. It's a shame that this specimen is sold quite commonly in fish stores. The usual victim is a newcomer to the fishkeeping world. After all, who wouldn't be attracted to the 2-3 inch fish that is an active swimmer, is a glittery silver and looks like a shark. Reasons for NOT buying this fish include:If you picked one up before knowing the above, care is relatively easy. Be aware that this fish will sometimes 'play dead' when scared. This can happen after adding and acclimating it to your tank. They prefer to be in groups, but, then again, buying more of a fish that you can't keep makes no sense. Avoid sharp objects in the tank and avoid scaring the fish: don't tap on the glass, flash or turn lights on suddenly or make sudden movements in front of the tank. They are hardy and tolerate a wide range of water conditions. They are very prone to ich and when injured in your tank, the injuries can become secondarily infected and require treatment with antibiotics. One of my sharks had a large gash on it's side which has since healed and left a scar. Try and find a home for this fish before it becomes large enough to consume your tank inhabitants.

Feeding: They eat anything and eventually they will eat your fish. They eat spirulina pellets, shelled peas and sinking pellets while small. Right now one of my irridescents is about 6" long and easily takes a whole pellet into his mouth at once. The more you feed them the larger they will become and they DO grow quickly.

Sexing and breeding: These catfish are egglayers and are manipulated with hormones for the aquarium trade and for food. Males have darker stripes and are more slender. They have never been known to breed in the home aquarium, probably because they have never reached their full size.

Comment: This post was placed mostly for cautionary reasons. This fish is NOT meant to be kept in the regular home aquarium. 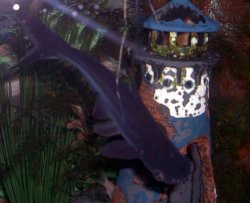 W
Do I need water from the parent’s tank?

my iridescent white shark is not eating

why the new iridecent shark not eat pellets