First of all, never underestimate the size of fully grown goldfish. There are no 'dwarf' breeds of goldfish, whatever 'the man in the shop' might say; even the smaller 'fancy' types have the capacity to grow to a good six inches/15 cms in length.

There are two main types of goldfish; the 'common' type and the 'fancy' goldfish.

Common goldfish have fairly streamlined bodies and are good swimmers. Comet goldfish, with the long flowing tails and fins are still of the 'common' type; they're not true fancies. Common goldfish are really not suitable for the average home aquarium; they grow very large (many to over a foot long) and are quite messy, so realistically they need a tank of 5'/1.5m in length to have enough room, which is a much bigger tank than most people can manage. These fish are very much best left to the pond. 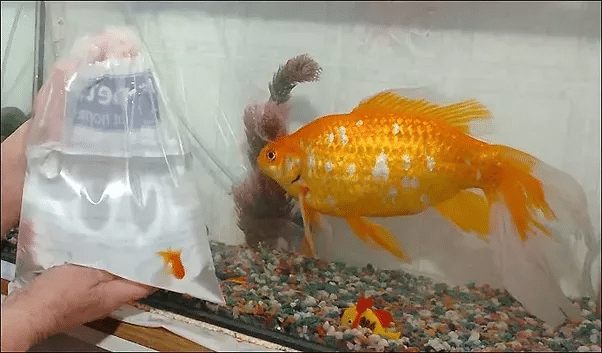 Fancy goldfish (varieties include fantails, orandas and black moors) have a short, fat body, and a double tail. They are still the same species, Carassius auratus, as 'normal' goldfish, and can interbreed with them, but look very different and do not grow quite so big. These are suitable for keeping in tanks (although not very small ones) for all their lives.

These pictures are all of normal, pet store goldfish; not special breeds, although some are a better example of their breed (the ranchu and oranda) than others (the fantail)! 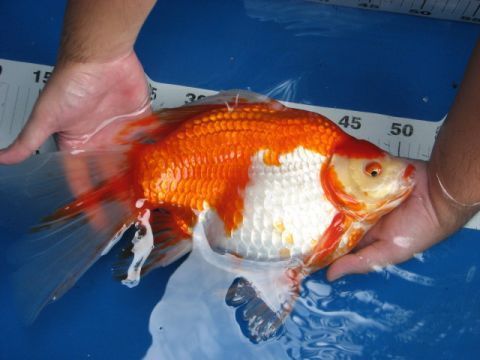 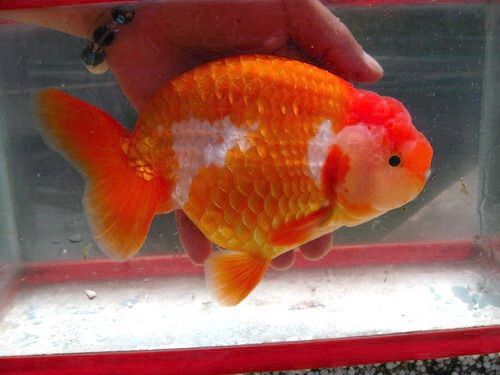 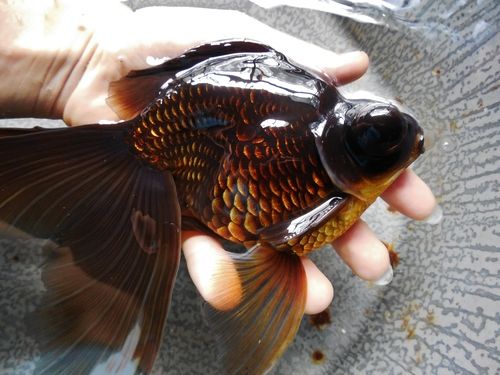 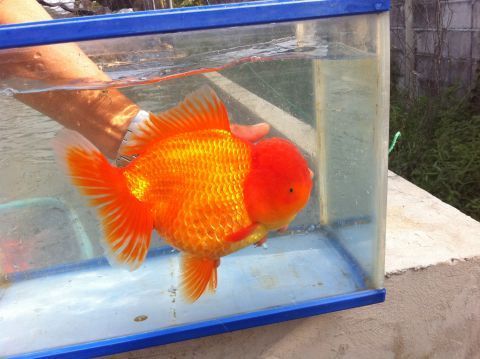 A Word on 'Stunting'

One of the things that every man on the street thinks they know about fish is "they only grow to the size of their tank, don't they?". Everyone knows that the goldfish their granny had in a bowl never got as big as the ones in Uncle John's pond. The reasons why this happens are, even now, not fully understood; and there is even some debate about whether 'stunting' (as this reduction in growth is called) is directly harmful to the fish, but whatever the truth about stunting turns out to be, it is not a practice that is in the best interests of the fish's long term health and happiness, and should be avoided by providing a suitable sized home and a regimen of regular, partial water changes.

Goldfish are not hard to keep; they are one of the easiest and hardiest fish in the hobby which explains their continuing popularity. Their innate hardiness enables them to survive conditions that would make other, more sensitive fish keel over, but that does not mean that those conditions won't affect them, make them sick, nor that they should be made to suffer unnecessarily. Like all fish, goldies need a tank that enables them to move freely and grow properly, good quality water, adequate filtration and an appropriate food.

Tank size is the biggest mistake that newcomers to goldfish make. Fancy goldfish need a tank that is a minimum of 100l for one fish, with an additional 50l for each additional fish (so, 150l for two fish, 200l for three and so on). While they can be started off in smaller tanks, getting a larger one should be made a matter of priority, as goldfish are fast growers in their first few years.

A smooth gravel that's small enough not to get stuck in your fish's mouths is a good substrate; you could use sand, but some people have reported their fish having irritated gills from foraging in sand, so gravel is probably a safer choice. Live plants are best, as they not only help keep the water quality good, but goldies also enjoy pecking and picking at them. Stick to cheap bunched plants and resign yourself to having to replace them frequently; it's good for your fish to 'eat their green's' anyway! You could try growing Java fern or anubias on pieces of bogwood, as most fish leave those plants alone. Any wood, rocks or other decor should be smooth; fancy goldfish easily tear their fins on sharp or rough objects.

Like all aquarium fish, goldfish need a properly 'cycled' filter for their tank to keep them healthy. 'Cycling' just means growing a colony of good bacteria in the filter to eat the fish's wastes and stop the water becoming toxic, and is covered in detail in the 'Beginner's Resource Centre' of this forum.

Go for the largest filter you can get, with the preference being for a large external, canister type filter. Check the filter often, as goldfish are greedy, messy fish and their filters can get clogged up, but never wash the 'media' (all the stuff inside the filter) in tap water, only old tank water, as the chlorine in tap water will kill the good bacteria, and never change or replace more than 1/4 of the media at any one time.

Good, clean water is, of course essential for all fish. Luckily goldfish are not fussy when it comes to pH (the acidity or alkalinity of the water) or hardness (the amount of dissolved minerals in it), so if your tap water is ok to drink, it should be fine for goldfish. Make sure that all the water that goes near your tank or filter is temperature matched (just roughly, with your hand, is good enough) and dechlorinated.
You should aim to change at least 50% of the water in your goldfish's tank every week. If your tank is on the small side, you should up that to 50% twice a week. Never be scared of doing big water changes; as long as the new water is the right temperature and dechlorinated, you won't do your fish any harm. You should also invest in some good, liquid or tablet based test kits for ammonia, nitrite and nitrate so you can test your water yourself in the case of any problems; more fish 'diseases' are caused by poor water than anything else.
Use a gravel cleaner on your gravel at every water change to make sure there is no build up of left over food or poop which can rot and lead to raised ammonia levels.

Again, goldfish are not hard to feed, but you do have to keep in mind some points that apply specially to fancy goldfish. Because their body is so shortened from the wild type carp, they are prone to digestive upsets that can go on to cause further problems by pressing on the fish's swim bladder. Goldfish naturally have a very short gut. with no proper stomach, so they need to be feed little and often rather than being overloaded with big meals. Pellets that sink slowly are better for fancy goldfish than flake foods, as eating from the surface can lead to the fish swallowing air. Give your fish a cooked pea or two, once a week, and also give them a 'fast day', one day a week, where you don't feed the fish at all; this helps clear the gut and keep it healthy.

Goldfish are prone to some illnesses and diseases, but most problems are ultimately caused by poor housing and water quality. If those are tip top, most goldfish will live their lives with no health issues at all.

This is a common problem in fancy goldfish. All fish have a swim bladder which helps keep them bouyant but in fancy goldfish, due their body shape, this is often compressed or deformed, which can lead to fish having balance problems. The most usual causes of 'swim bladder disease' are actually problems in the fish's digestive tract pushing on the swim bladder. Make sure your fancies don't eat from the surface; either by using a slow sinking, pellet or, if you use a flake food, soaking it (or holding it underwater for a moment or two) before letting your fish eat and make sure they are never given more than they can eat in two or three minutes. One fast day a week, and a weekly feed of lightly cooked, deshelled peas will also help keep the fish's digestive system in good health and should stop most fish developing swim bladder issues, although there will always be some fish who have a very misshapen swim bladder and who struggle to stay upright. For those fish, extra care over feeding and water quality, and keeping the water warm and shallow will help, if not cure them altogether.

This is a very common disease in fish. Some people believe that the ich/whitespot parasite is present in nearly all tanks, but that it is only able to attack the fish when it is already ill for some other reason. Whether this is true or not, fish that are ill or stressed from poor housing or water (I know I keep mentioning this, but it really is the key to keeping all fish healthy!) are more prone to developing whitespot/ich (and fungus) because their slime coat, which usually helps protect them, becomes thin, patchy or even absent altogether. Ich is usually cleared up rapidly and easily with a medicine from your LFS, but do be aware that there are differing strains of ich, some of which are resistant to some meds. If the medication you have isn't working after 4-5 days, you should consider switching to another brand (and don't write off the first one as 'ueseless'! It might work on someone else's ich

Again, these are 'diseases' which are commonly seen and are, again, usually related to poor water quality. They have the same basic causes as ich; the parastite or fungus gets a foothold on the fish because it is already 'under the weather', for whatever reason, and the fish is too weak to fight it off. Mild cases of fungus and finrot can often be cured with nothing more than an improvement in water quality, but if the fish is not responding within a few days, or is getting worse, then a proprietary medicine should be used.

This is more of a symptom (like 'stomach ache' in humans) than a disease in its own right. Fish with dropsy look swollen, and their scales stick out, giving the fish a spiky, 'pinecone' appearance. Its usual cause is fluid building up in the body cavity, due to either organ failure or infection. Some cases respond to cures like salt baths (2-3 tablespoons of aquarium, sea or rock salt, dissolved in a gallon of water; let the fish stay in for 20 minutes, twice a day) or anti internal bacterial medications, but it is, sadly, very often fatal.