Care: Cherry shrimp are generally very easy to care for, they are very prolific breeders when happy. They need a well-cycled tank of at least five gallons (US) (they can live in smaller tanks but its harder to maintain water quality) They wonâ€™t tolerate ammonia or nitrite, copper as with all invertebrates is dangerous to cherries. They prefer slightly alkaline water but will do well in ph of 6.5 to 8. they can cope with temperature from 15C to 28C though 21C to 25C seems best. The filter inlet needs to be covered with fine netting or a sponge to prevent young shrimp getting sucked into the filter.

They need a diet with a high vegetable content, spinach, cabbage, peas, nettles are all welcome, they eat just about anything, fish food, shrimp pellets, seeds, oats, algae wafers etc. They eat a lot less than fish of a similar size and care needs to be taken that no food is left over to pollute the tank. The micro food that grows in the tank is also an important part of their diet and is all the newborn shrimp normally eat for a few days. Dried oak, beech or Indian almond leaves are a good addition as they grow micro food and are eaten by the shrimp. Cherry shrimp are good algae eaters and eat lots of green thread/hair and some other types of algae.
.
Adults can be kept with small peaceful fish such as cardinal tetras, guppys cories etc. If the fish harass the shrimp they will hide most of the time. Any fish capable of eating daphnia can kill the baby shrimp, ottos are one of the few fish that definitely wonâ€™t eat the shrimplets. The babies are good hiders and some should survive in heavily planted tanks, moss is particularly good for helping the young survive.

They reach breeding age at about 3 months, females are more intensely coloured and larger than males. They moult, mate and then release the eggs, which they carry for about 30 days depending on temperature; the adult shrimp pose no danger to the young. In a shrimp only tank they can breed very fast and overcrowd the tank, if the breeding slows or less young are surviving itâ€™s a sign that the tank is overcrowded, they will stop breeding altogether when too crowded. ,

The picture is of female who is less than one inch long with a two week old baby below her on the moss. 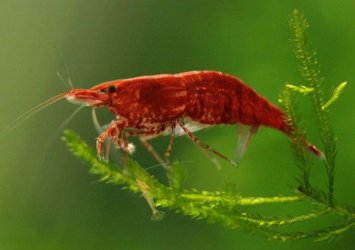 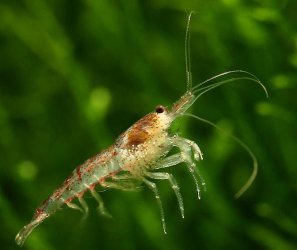 A mother with eggs. 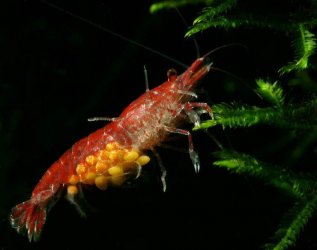