Minimum Tank Size: 7 US gallons (for a couple of shrimp)

Care: They are very adaptable and tolerant to varied water parameters ï¿½ if acclimatised slowly. Though they prefer slightly harder, more alkaline waters (as opposed to really soft acidic). They do not tolerate heavy metals (ensure you treat your water accordingly), nitrite and ammonia (ensure you do not add them to a new tank still cycling or with any possible traces of aforementioned).

Like all crustaceans, it will moult as it grows. But the frequency depends a lot on the age, water and food.A very young fast growing shrimp may moult a number of times a month, while a older mature shrimp only once a month. And when very old, even less often. When they moult, it usually appears as an entire shell ï¿½ legs, feelers everything. This is often mistaken for a dead shrimp, but isnï¿½t. I always remove the empty shells, as they seem to take days to decompose ï¿½ and fish arenï¿½t usually interested in eating the empty shell.

No predatory/nippy/very territorial medium/large fish. In other words: small peaceful fish! Cichlids are not recommended, but survival is reported when kept with Rams, Angels etc. However for a shrimp to live in constant "fear" and hiding to stay alive, is not fair ï¿½ and therefore not recommended. I also keep Crystal Red Shrimp (Caridina sp. crystal red) and they seem to live in harmony (in other words completely ignoring each otherï¿½s existence).

Feeding: A well planted tank is a must, as they are heavy grazers and feed heavily on algae. They will eat most algae, and if there is not enough, might even lightly graze on some plants. They are however also opportunistic scavengers and will enthusiastically devour any fish food (flakes, algae wafers, pellets etc.) and often even steal it straight from a fishes' mouth (if the fish isnï¿½t quick enough) !

Sexing: Males are generally smaller and slimmer (3cm) and females rounder and larger (5cm). Another tell tail sign is the spots on the sides: on males, the spots are distinct and more or less evenly spaced, while on females, in some places they tend to stretch out and merge with one another, forming rough broken lines.

Breeding: Caridina japonica are freshwater shrimp, but their lifecycle is such, that the zoes (baby shrimp) hatch in freshwater, but then move downstream through brackish water into full strength marine water. Here they remain (up to 30 days) until the metamorphose, before moving back up to fresh water. When breeding in an aquarium, this will need to be simulated in a manner.

In brief:
The females have a 6-week cycle. When carrying eggs and ready to mate, she will release pheromones into the water to attract the males and fertilise the eggs. The eggs hatch (1mm small) and remain in freshwater for up to around 5 days. They then get transferred to full strength marine water where they will remain for a further 20-30 days (until they have metamorphosed). During this time, they require phytoplankton (green water) to feed on ï¿½ without this, they will not survive or grow. Once metamorphosed, they then return to freshwater.
I recently attempted this, but failed to keep my green water ï¿½aliveï¿½ and unfortunately lost the zoes just short of 2 weeks of age. For more information on my own breeding attempt, see this thread.

As reports of successful breeding are few and far between, I would like to add some very indepth links for anyone interested in breeding.

Notes:Do not buy Caridina japonica in the hope that they will keep your tank algae free or cure an algae infested tank. In many cases they are incredibly useful and make a huge difference and are excellent algae controllers ï¿½ but seldom are they algae removers. They are fascinating, entertaining little creatures to watch and an asset to all suitable tanks.

Another of my threads, praising the usefulness of Caridina Japonica.

(Please do not use any of my photos without my permission)

a couple of my berried females 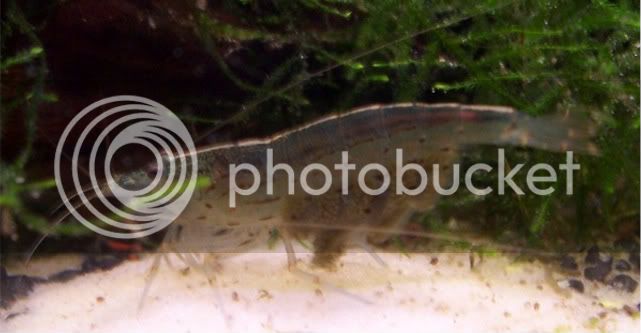 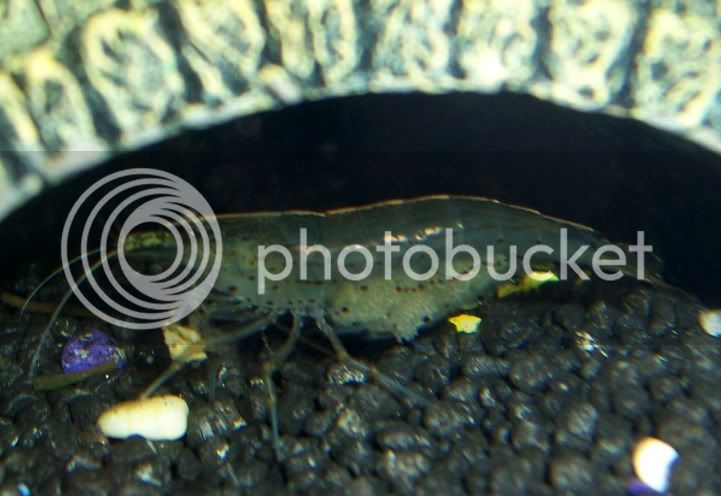