Rocking a crabshell for a hat. 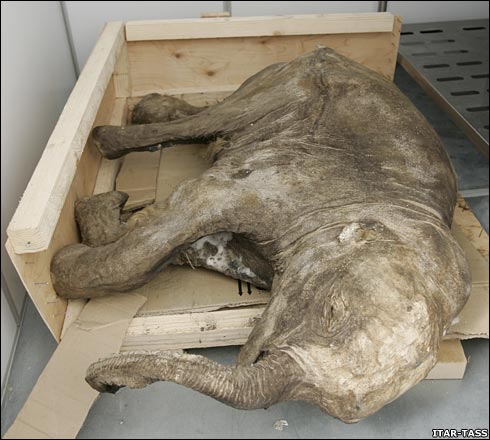 A baby mammoth unearthed in the permafrost of north-west Siberia could be the best preserved specimen of its type, scientists have said. The frozen carcass is to be sent to Japan for detailed study. The six-month-old female calf was discovered on the Yamal peninsula of Russia and is thought to have died 10,000 years ago. The animal's trunk and eyes are still intact and some of its fur remains on the body.

In terms of its state of preservation, this is the world's most valuable discovery. ---Alexei Tikhonov, Russian Academy of Sciences

Mammoths are an extinct member of the elephant family. Adults often possessed long, curved tusks and a coat of long hair. The 130cm (4ft 3ins) tall, 50kg Siberian specimen dates to the end of the last Ice Age, when the great beasts were vanishing from the planet. It was discovered by a reindeer herder in May this year. Yuri Khudi stumbled across the carcass near the Yuribei River, in Russia's Yamal-Nenets autonomous district.

Missing tail
Last week, an international delegation of experts convened in the town of Salekhard, near the discovery site, to carry out a preliminary examination of the animal. "The mammoth has no defects except that its tail was bit off," said Alexei Tikhonov, deputy director of the Zoological Institute of the Russian Academy of Sciences and a member of the delegation. "In terms of its state of preservation, this is the world's most valuable discovery," he said.

Larry Agenbroad, director of the Mammoth Site of Hot Springs research centre in South Dakota, US, said: "To find a juvenile mammoth in any condition is extremely rare." Dr Agenbroad added that he knew of only three other examples.

Some scientists hold out hope that well preserved sperm or other cells containing viable DNA could be used to resurrect the mammoth. Despite the inherent difficulties, Dr Agenbroad remains optimistic about the potential for cloning. "When we got the Jarkov mammoth [found frozen in Taimyr, Siberia, in 1997], the geneticists told me: 'if you can get us good DNA, we'll have a baby mammoth for you in 22 months'," he told BBC News.

Lucrative trade
That specimen failed to yield DNA of sufficient quality, but some researchers believe it may only be a matter of time until the right find emerges from Siberia. Bringing mammoths back from the dead could take the form of injecting sperm into the egg of a relative, such as the Asian elephant, to try to create a hybrid. Alternatively, scientists could attempt to clone a pure mammoth by fusing the nucleus of a mammoth cell with an elephant egg cell stripped of its DNA.

But Dr Agenbroad warned that scientifically valuable Siberian mammoth specimens were being lost to a lucrative trade in ivory, skin, hair and other body parts. The city of Yakutsk in Russia's far east forms the hub for this trade. Local people are scouring the Siberian permafrost for remains to sell on, and, according to Dr Agenbroad, more carcasses could be falling into the hands of dealers than are finding their way to scientists.

Japan transfer
"These products are primarily for collectors and it is usually illicit," he explained. "Originally it was for ivory, now it is everything. You can now go on almost any fossil marketing website and find mammoth hair for $50 an inch. It has grown beyond anyone's imagination."

Dr Agenbroad added: "Russia says that any mammoth remains are the property of the Russian government, but nobody really pays attention to that."

The Yamal mammoth is expected to be transferred to Jikei University in Tokyo, Japan, later this year. A team led by Professor Naoki Suzuki will carry out an extensive study of the carcass, including CT scans of its internal organs.

Mammoths first appeared in the Pliocene Epoch, 4.8 million years ago. What caused their widespread disappearance at the end of the last Ice Age remains unclear; but climate change, overkill by human hunters, or a combination of both could have been to blame. One population of mammoths lived on in isolation on Russia's remote Wrangel Island until about 5,000 years ago.
Click to expand...

That is really amazing.....

Swim with the Fishes

You would think they wouldn't have it just laying out but that it would need to remain totally frozen to preserve it. Maybe it is in that photo. I'm not sure I agree with trying to use DNA to recreate a hybrid or even a true mammoth. You never know what that could lead to.

It looks more freeze dried than frozen in the conventional sense. After all, food goes funny in the freezer after a few years, after a few thousand it isn't going to be like something in a Birdseye advert.
B

Thats awesome to find something like that in the condition that it is. I wonder if its would be possible to find usable DNA inside it.

I cant wait for the day they clone one of those things and we get to see one alive and well. Even if technology isnt quite there just yet it doesnt mean that improvements can come along in the coming years and allow us to go back and do what couldnt be done currently. I'm all for it. worrying is for worry worts, just do it, worst comes to worst you just put a bullet in it and start over

maybe doctor evil trapped him in his freeze machine

i wonder what bit its tail off ??

Considering the age of the calf, it wasn't too big. In fact, in order for it's tail to have been bitten off, it must have been orphaned recently before death. A Large Sabretooth cat could've easily done that.
You must log in or register to reply here.
Share:
Facebook Reddit Pinterest Tumblr WhatsApp Email Link

S
Anyone here own a BMW or good with mechanics?

Female endler has a white colored area on tail? Help!

D
Question about stocking levels in a 120litre

Today at 10:41 AM
ClownLurch
C
M
What's this on my Corydora?