P. brummeri is the only species in the genus Pseudechidna. As its common name suggests, P. brummeri is a very thin species with wide fins, especially the dorsal: 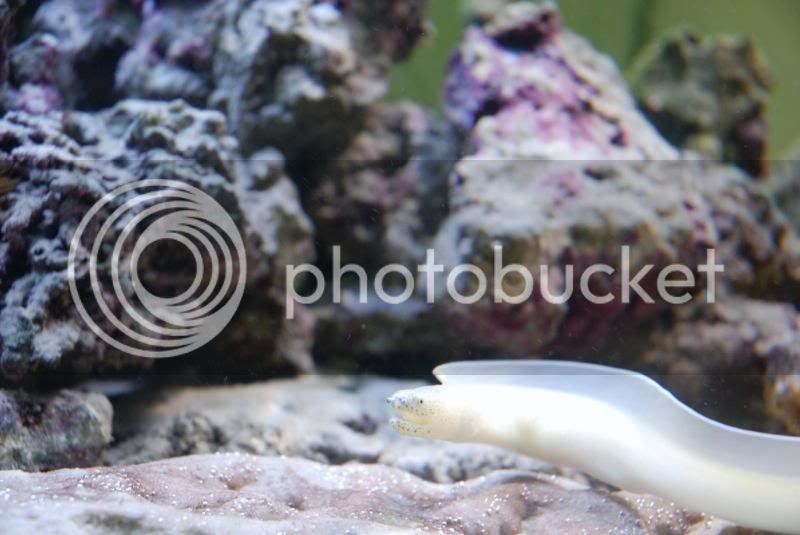 It is characterised by having dark spots on the face as well as the brighter stripe at the top of the dorsal fin, running the length of said fin. P. brummeri has a somewhat serpentine appearance, as well as resembling the reptiles in its form of locomotion

P. brummeri have a maximum reported length of 103cm (40.6") though I would be surprised to hear of any specimens that are any great deal larger than 36" in captivity. Due to its cryptic nature and small girth (at 30" long my current eel is barely the thickness of one finger) they can be placed into tanks as small as 55 gallons. Obviously larger is better and aggressive skimming to handle the meatier foods eaten will be of benefit on such a smaller tank.

Normal marine conditions of a salinity from 32-36ppt, temperature of 26-28 and pH of 7.8 and up should be fine for this eel. It does not appear to be massively demanding in water quality and after a short acclimatisation period will settle into a tank nicely. Obviously, as this is a somewhat cryptic fish, having enough rock work to provide a hiding hole with more than one exit should be considered essential.

I have had no issues when keeping this eel with tank mates. I previously had two eels, with one being quite a bit smaller than the current eel, yet no aggression or predation took place between the individuals. 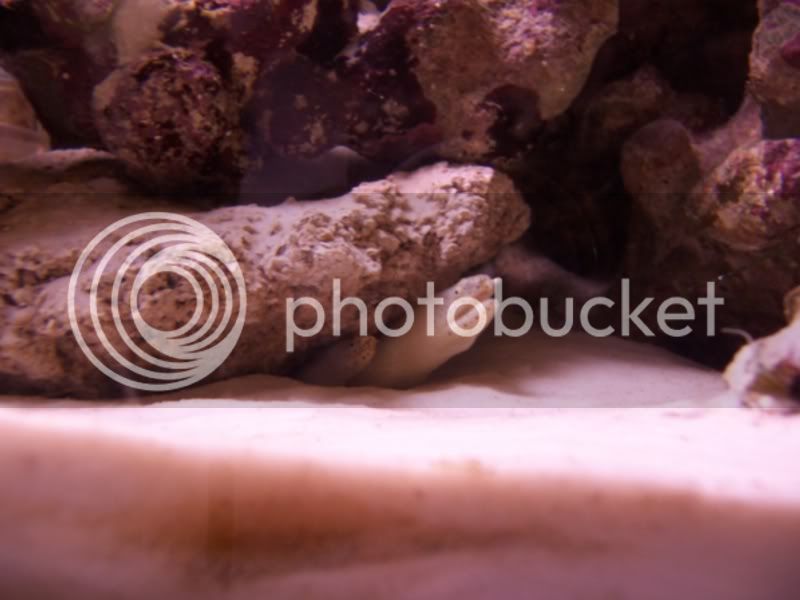 Sadly the smaller eel ceased feeding and eventually died, almost certainly from malnutrition (see below for issues). Both eels lived in a small 2 foot tank with a number of feeder shrimp, none of which were ever eaten. The surviving eel has now lived in my larger reef tank for over 6 months with no issue alongside shrimp, snails, hermits and fish. Despite the apparent lack of desire to consume tank mates, one should always be aware that smaller inverts are a likely part of the natural diet.

The eel's diet is believed to be crustaceans and small fish. Having had my finger inside the eel's mouth I can confirm it has the flattened teeth similar to the Echidna nebulosa snowflake eel which specialises in eating inverts. 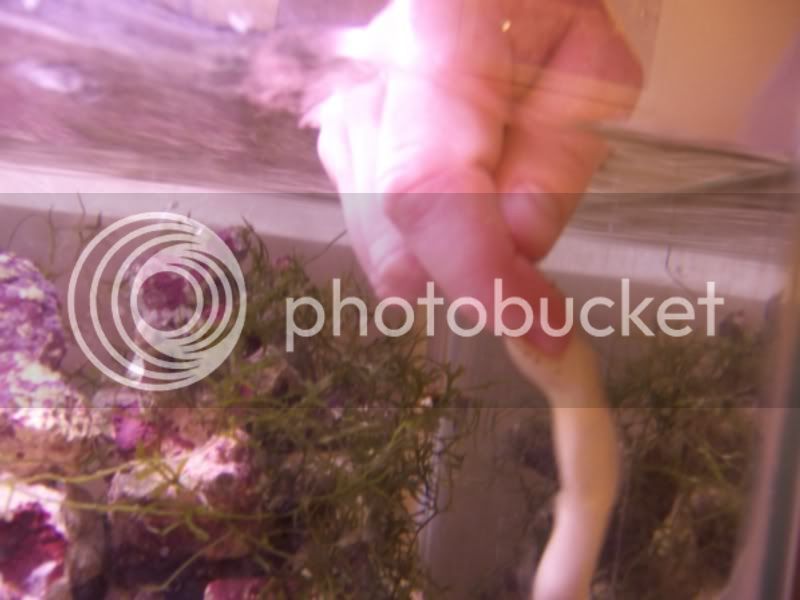 Scott W Michael notes that he has never got this eel to eat dead, and has had to rely on small feeder fish. On the other hand I have found them somewhat ready to take prawns in the aquarium, but have better luck using hands than a stick to start with (though have had no luck with live feeder shrimp): 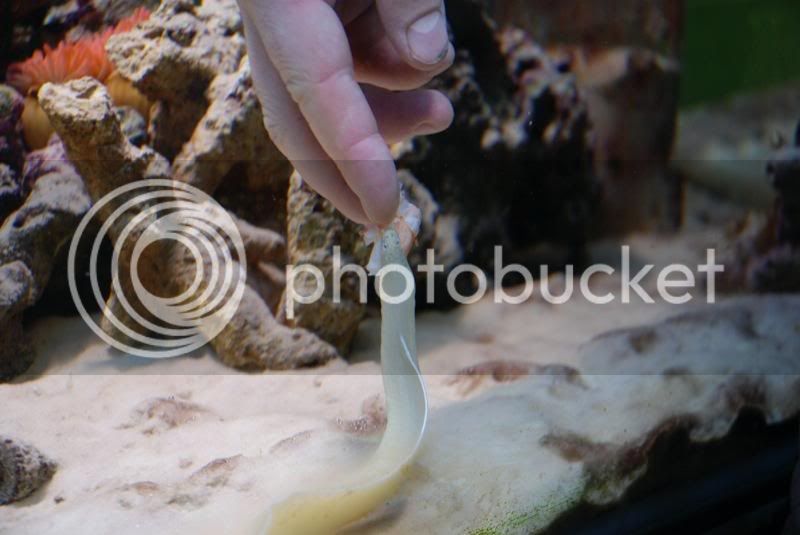 P. brummeri can be somewhat temperamental with feeding. I have had both of my eels go through "hunger strikes" of refusing to eat. One never ended the strike while the current one resumed eating upon being moved into a larger tank. the confined conditions of the previous tank may have affected teh behaviour of the eel, so be very ready to upgrade tanks if an eel decides to stop eating.

Once your P. brummeri is eating prawns you can enrich their food with a supplement to ensure the eel gets all the necessary nutrients.

I am unaware of any breeding or spawning of this species. The eel is gonochoric (sex is determined at birth and does not change) which is different to the ribbon eel (Rhinomuraena quaesita), a protandrous hermaphrodite (starts out male and becomes female later in life). Little is known about the repoduction of any of the Family Muraenidae but it has been noted that there are some differences between the dentition of Richardson's Morays (Gymnothorax richardsonii) and Snowflake Morays (Echidna nebulosa).

This eel is a good candidate for someone looking for something out of the ordinary and are prepared to risk putting one in with reef animals. One should also be prepared for some effort to get them to feed. The fish will be somewhat cryptic and you will often see little more than a head, but when the eel emerges fully, it is a magnificent sight. 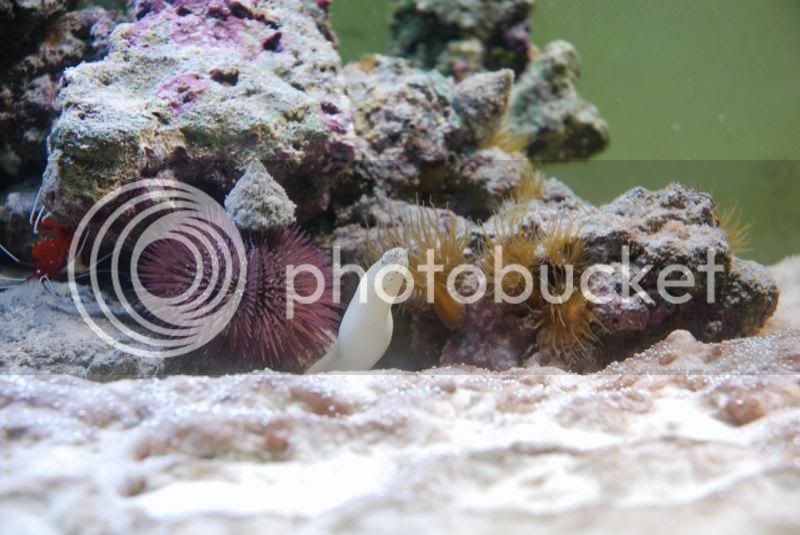 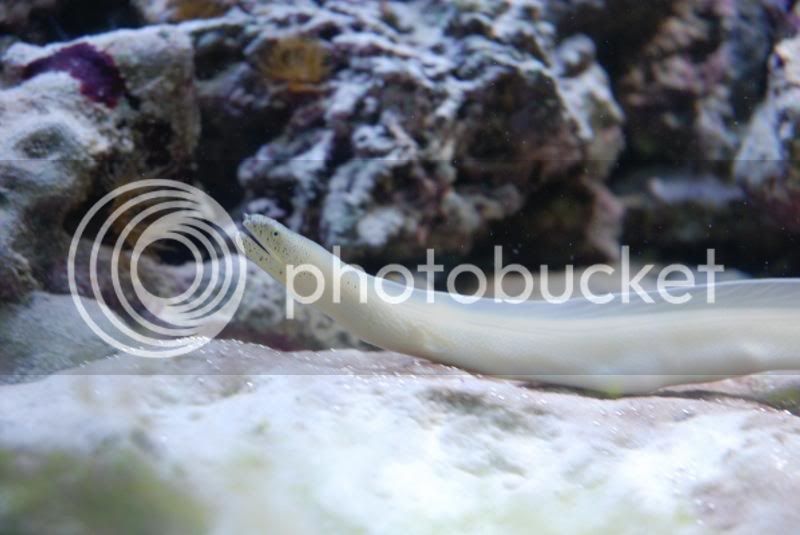 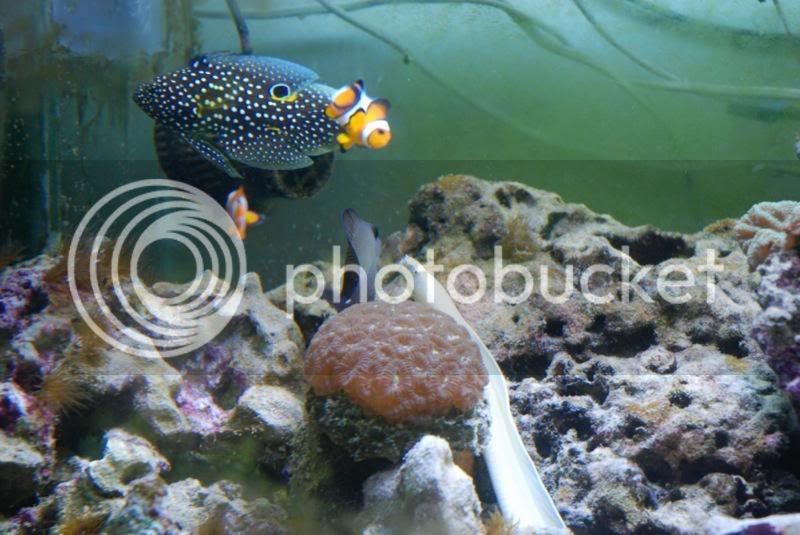