Pet of the Month

​
PLEASE VOTE NOW
We have 7 awesome pets entered into November the 2021 Pet of the Month Contest. View all the pets and descriptions below and then go to top of page and click on your choice for POTM and then click the "cast" button.

Poll will close on 'November 30th at 4:30 PM ET (US).
Thread will periodically be cleaned up for readability.
We at fishforums.net thank you for your participation
Last edited: Jan 21, 2022 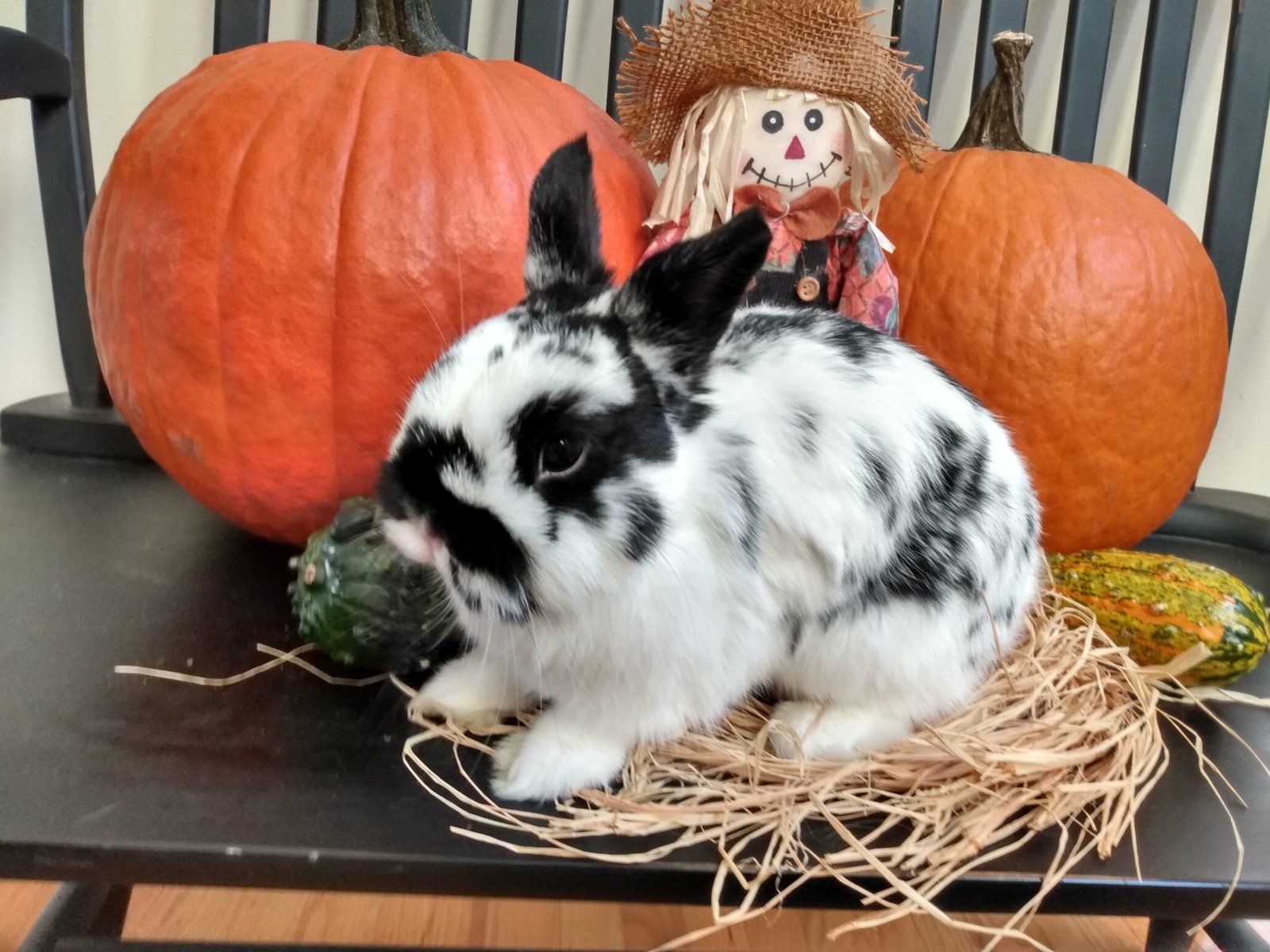 This is my bunny, Chili! We think he is either a Polish dwarf or a Polish dwarf mix. He is a little over 1 year old, and we adopted him in March.
Chili is an absolute sweetheart. He loves to cuddle and sit on our laps. He also loves to lick our faces.
Chili is very spunky, and loves his freedom. He has a pen, that we put him in at night or when we leave the house, but otherwise he is always free. He likes to run and do binkies, and watch tv, lol. He also likes to sleep under the couch in the afternoon.
Sometimes he can be very naughty too. Like when he chewed up one of our spider plants

(don't worry, they're rabbit safe).
Chili loves everyone in my family, but he and I have a very special bond. He licks me more than anyone else, spends the most time with me, and looks for me when he wants comfort. He's my best friend!
Last edited by a moderator: Nov 18, 2021 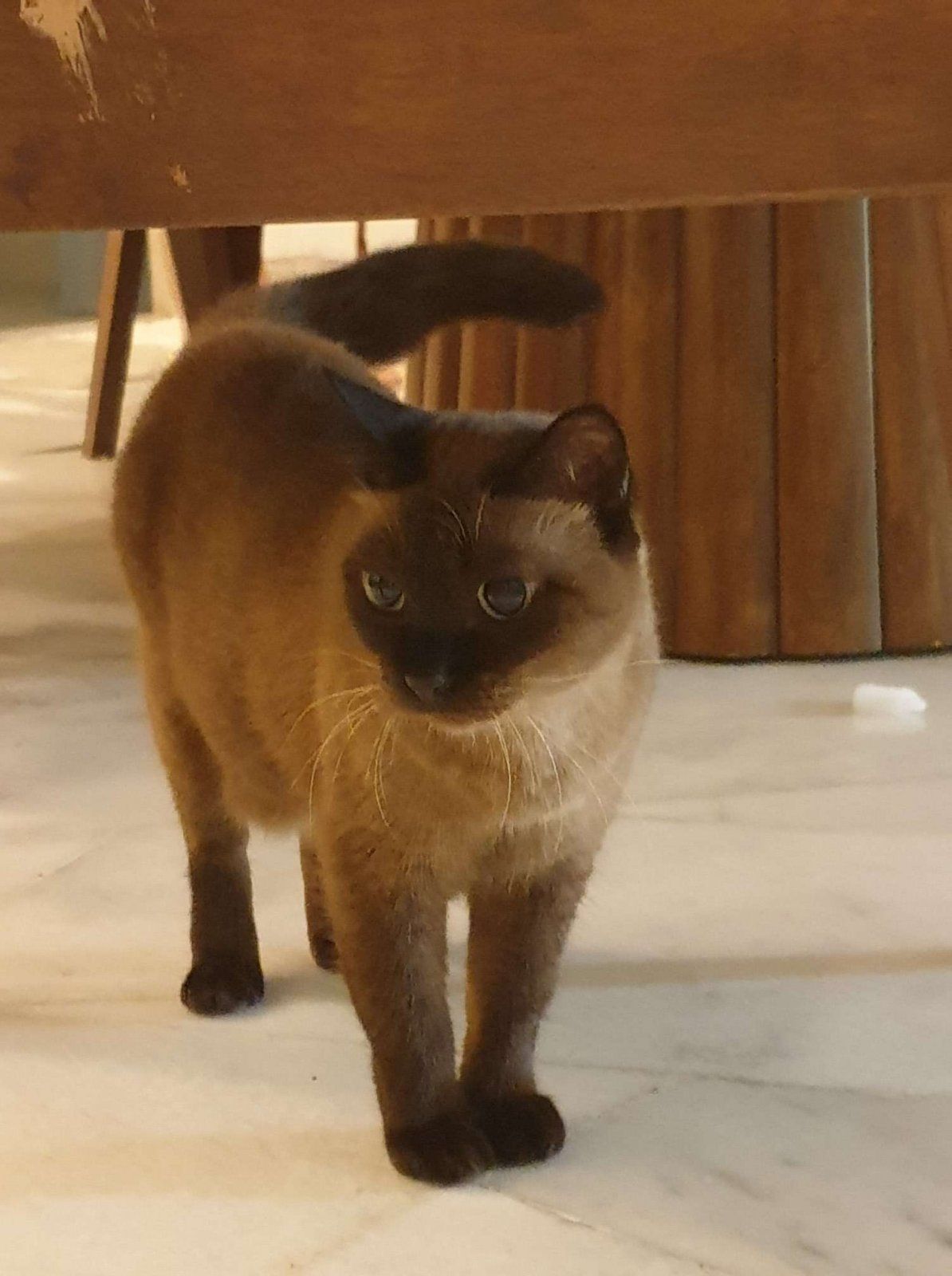 This is my 16 year old cat, Kitun.
She is a burmese. That is all I know lol. When my mum moved here 15 years ago(before I was born), Kitun(she was about 1 year old at the time) suddenly walked into our house and decided it was her territory. My mum liked her so decided to let her stay. She does not have a litter box, she does her business in the garden so it goes back to the earth instead of being thrown away to add to the trash we already have on the earth. She does not get groomed, she grooms herself. She drinks water from puddles, fish tanks, anything available. She absolutely loves sunbathing, and she sleeps a lot. She eats tinned cat food of many different brands, prodiet, fancy feast, even tuna for human consumption. She snores in deep sleep and it sounds adorable. When she gets handled too much or she gets fed up, she goes down to the neighbours house. They welcome any stray cats. She is indoor and outdoor cat. She does not have a collar and she is a free cat. She is free to go where she pleases. She gets sick very very rarely.
Last edited by a moderator: Nov 18, 2021

This is Margot, our Jack Russell Terrier. She's our only non fish animal so you'll be seeing her often! 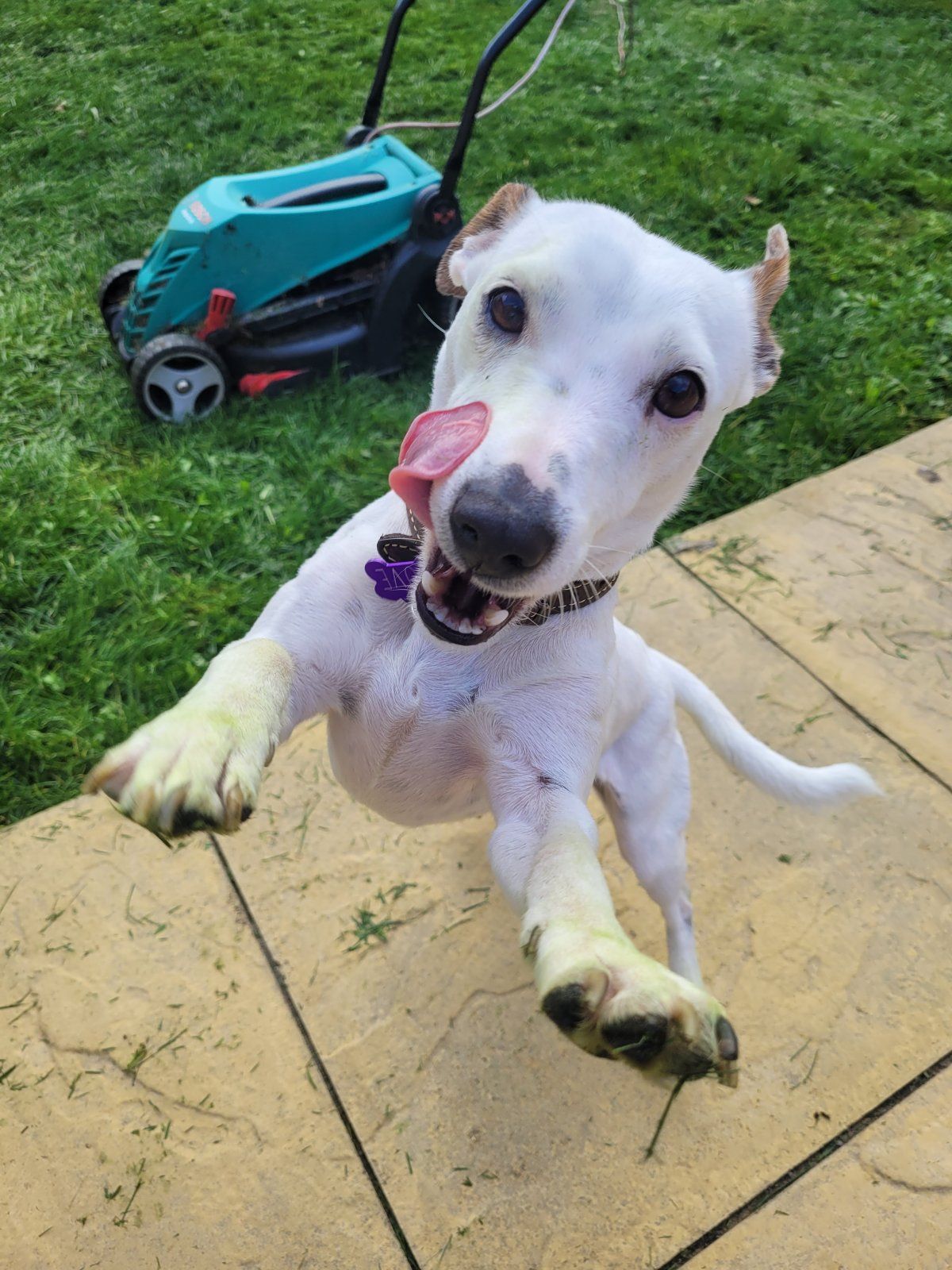 We adopted Margot from another family who didn't take care of her very well. She has no socialisation skills and is pretty much afraid of everything, including the post it note I used to enter her! Her confidence is growing day by day and she's a very fast learner.

She is a very sweet young lady, she is still only 2 and loves to play with her tennis balls and her cuddly toys...especially if there's a squeaker inside them!

Margot is very gentle and loves to cozy up on the sofa with us at the end of the day, she loves food of any kind apart from raw green beans

Edited to add, my most favourite thing about her is the whole back end of her moves when she wags her tail, she's so enthusiastic that her back legs leave the ground when she's doing her thing, like a little samba dance!
Last edited by a moderator: Nov 18, 2021 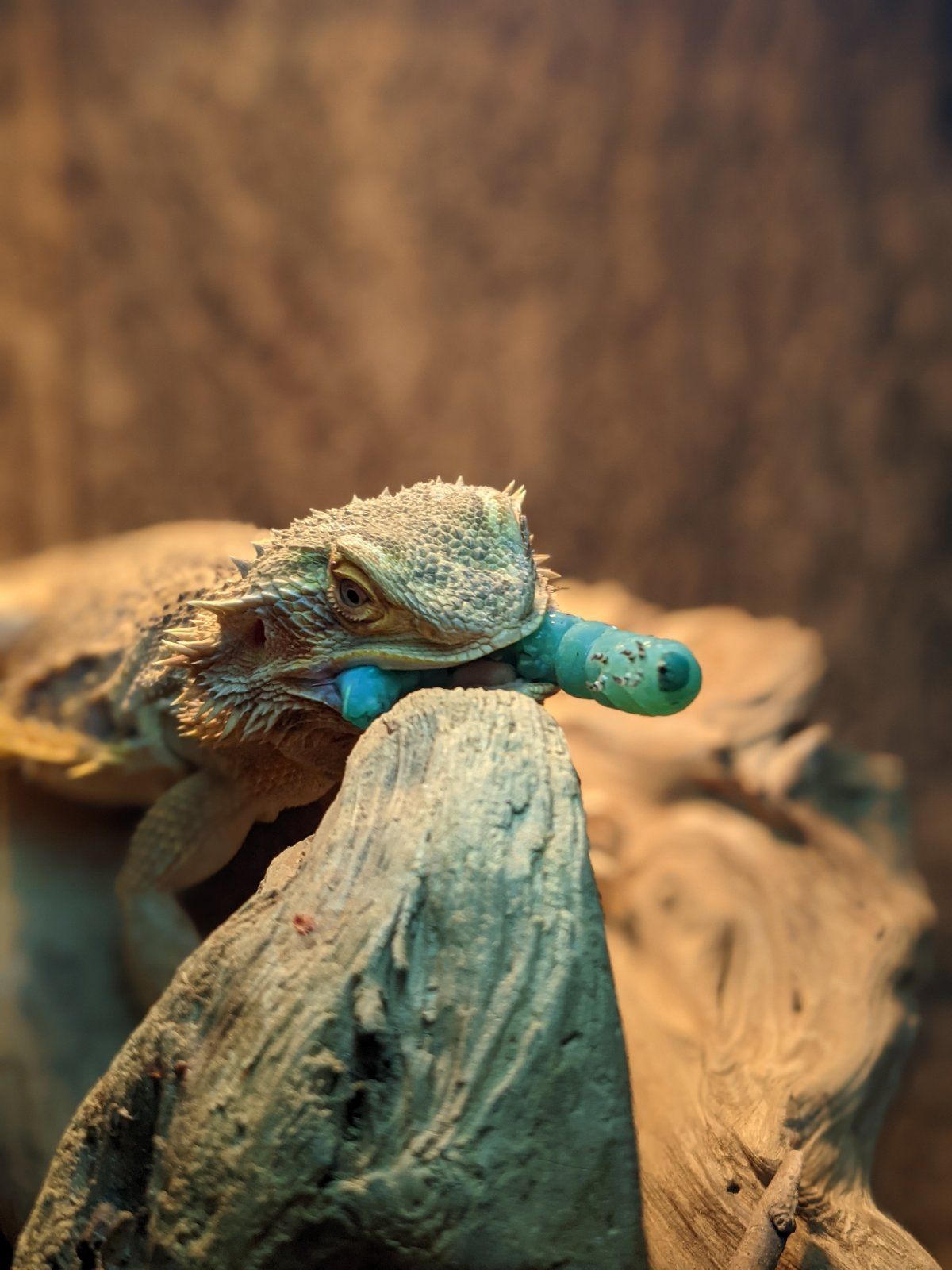 Aight, here we go: My bearded dragon named Azula. Earlier someone asked how big she is, she's around 18" with tail.

She was surrendered to a store I was working at in 2016. She had metabolic bone disease, but was otherwise healthy. I give her extended hours in the sun quite often during summer, as natural UVB is far superior to artificial. She's become much more active than when I got her. She was already an adult when surrendered, so she's at least 6; though who knows her real age!

She gets fed peppers, apple, carrot, cilantro, bok choy, endive, dandelion, clover, strawberry, blueberry, and cactus pads among other plant matter. Her animal protein mainly comes in the form of silkworms and hornworms, with some superworms. To help with her MBD I offer thawed pinky mice once or twice during winter when she can't benefit from sunlight. She'll also eat Repashy and moist pellets if I put the food in a container, placing it in front of her and moving it back and forth.

Took the picture this morning while she was asleep, so not the best, but should cover the entry requirements. The other is from earlier this year while out hunting dandelion.

This is my rottweiler mix Baby. 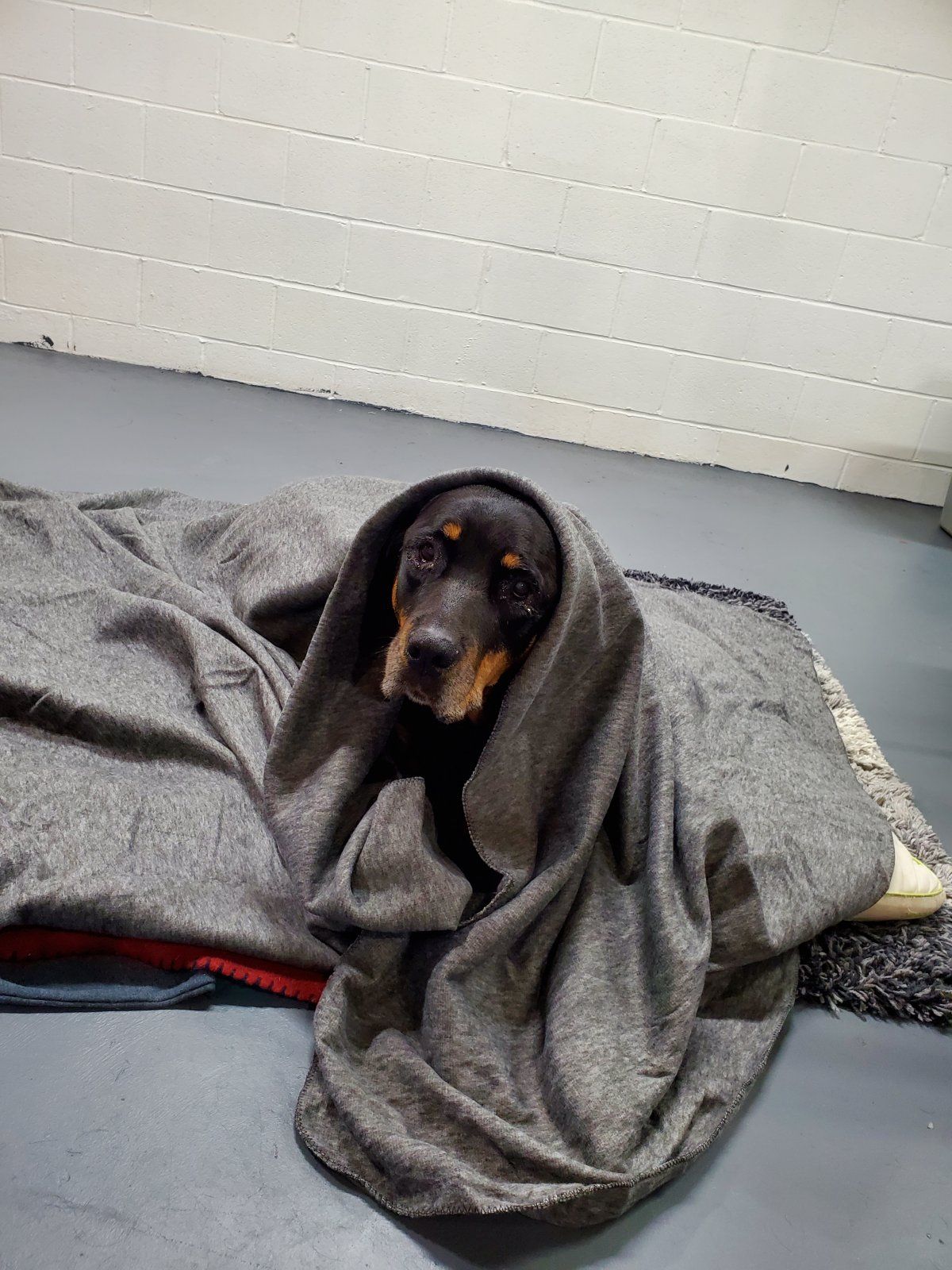 We adopted her and her sister Zoey in February of 2012. Looking back I'm glad we got them out of that house because there was just too much dogs and a not great place to say it nicely..
Baby and her sister are currently 10 years old, and still act like puppies in their own ways! Although the years have slown them down you couldn't tell them any different.

I'm entering Baby just because she's more photogenic hah. She will do anything you ask of her for food or a snack she really likes. What makes her a little different is she's actually a diabetic! So as much as she may want a random good girl treat through the day, she can't to keep her blood sugar levels in check. However she really enjoyes an icecube treat, and will now lick and eat snow outside

She absolutely loves getting covered up with a blanket at bedtime and will keep it on her through the night, although her sister looks at her like she's crazy. She also really loves her "hand" being held. She'll paw at your arm until you hold her hand and give pets with the other
Last edited by a moderator: Nov 18, 2021 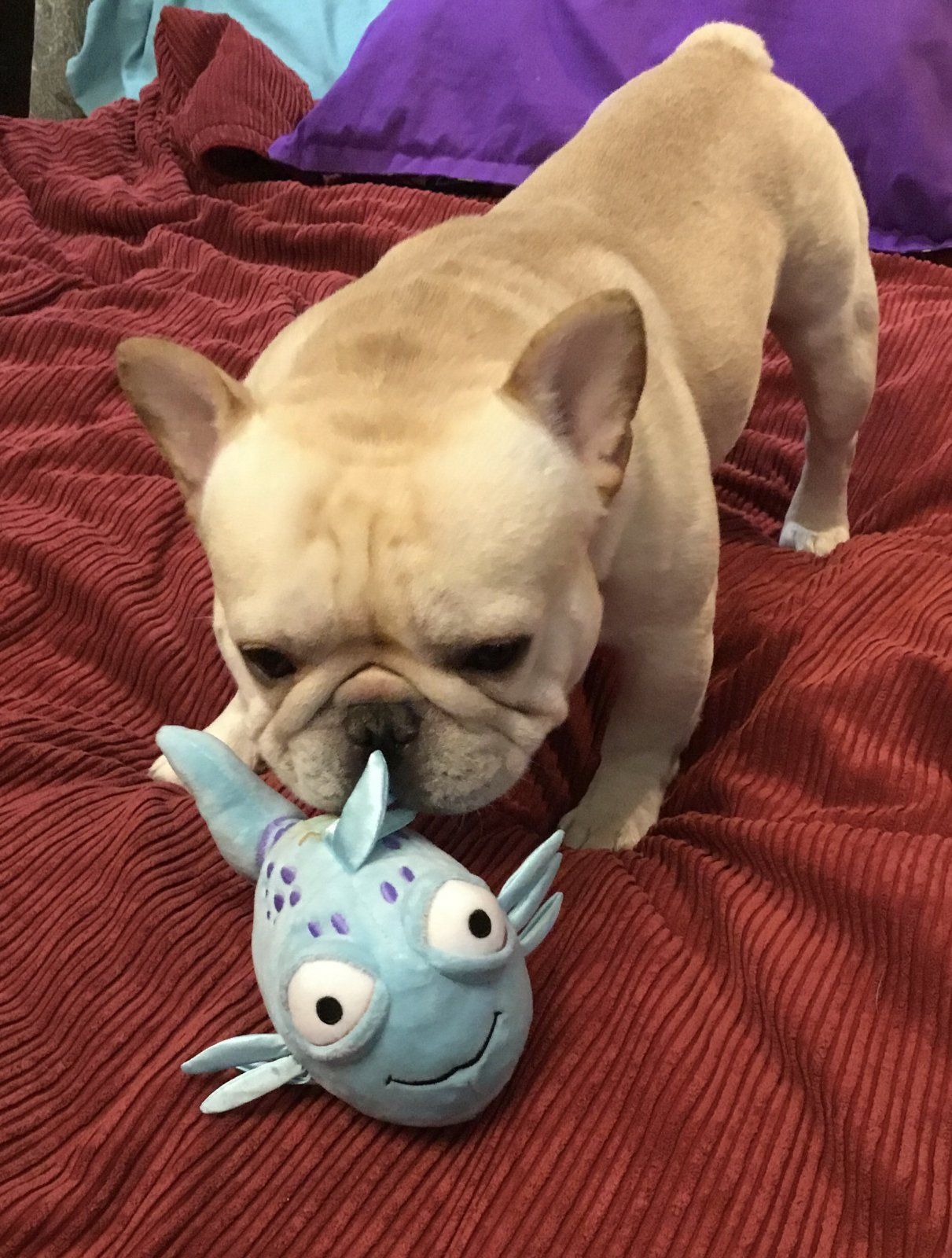 Here’s Rocky, my 3 yr old French Bulldog who weighs in at 27.4 pounds. He’s been my boy for a year. I’d always wanted a Frenchie and my husband found him online not long after my constant companion, Daisy, died from an incurable neurological condition. She was a 125 pd mixed breed who looked like a black wolf. She is gone, but never forgotten & Rocky helped mend the hole in my heart.
He previously belonged to a breeder and flunked out of her program. Rocky has a long dog show name on his AKC papers: Augustio Man of Honor. He quickly became Rocky. Rocky has entered and won dog shows all over the East Coast. However he objected to the breeders’ ways of extracting “specimen” & often fainted during the procedure.

The breeder gave up on him & confined him to a crate. He was fed once a day and let out briefly twice a day. Such was his life before he became my bed buddy & constant companion.

I have googled Rocky & the names on his AKC papers & he has kinfolk all around the world that look exactly like him!
Last edited by a moderator: Nov 17, 2021 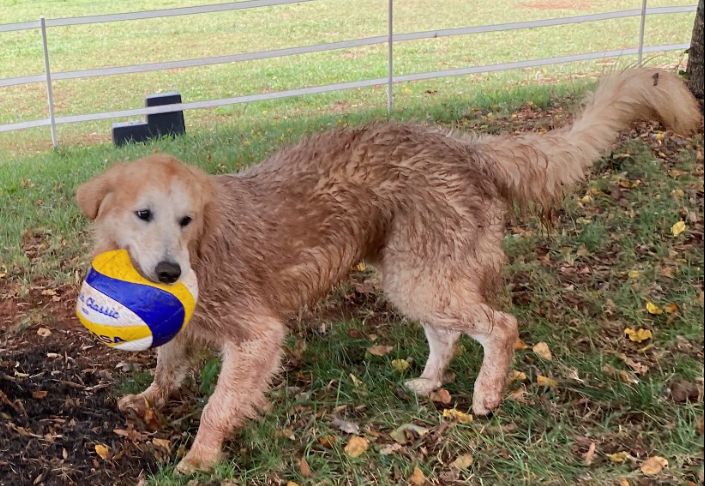 This is our crazy dog, Charlie. He is an English Cream Retriever (at least he’s supposed to be! Most of the time he is a nice clay color, like the picture above!).
Charlie is two years old. He loves to swim, loves to eat, loves to play fetch, loves to bark, and does everything in his power to get dirty! Our home has a lake that he loves to swim in, no matter how cold it is. We once got tons of snow, so the lake turned to slush. He dove right in and swam for over an hour. He loves to splash and chase all the water droplets. He enjoys chasing anything, honestly. He learned that phones have flashlights, which he loves to chase, so if someone pulls their phone out he will bark and bark. If they don’t turn the flash light on, he will snatch the phone and run away with it to try to do it himself. He also loves to play in the hose. We leave the hose on most of the time, and have a little nozzle or handle on the end. He learned how to twist the nozzle or press on the handle to make the hose spray. He sits with us while we watch movies, and will watch the movie with us. Not just sit there with us, he will watch the TV, especially if there is a lot going on or a lot of noise. As I am sure you can tell from the photo, he is a clumsy, messy boy! Constantly dirty. We bathe him, and he runs right back down to the lake! He is a real sweetheart though. Sometimes my sisters and I let him sleep in our bedroom, and he hops up onto our beds and snuggles right down for the night. When he is tired and satisfied, he will sprawl out on his side and let out a contented sigh. He loves to be scratched and itched, he will sit there and moan and groan like “oh that’s so nice!”. He is best buddies with our Australian Shepherd, Griffin. They get into all kinds of trouble together. He is just a crazy dog loving his life

End of Entries;
Please scroll up slowly as your review the 7 entrants and choose your favorite and then click the "cast" button. Good luck to all our awesome entrants.

At the end of this month, we will begin accepting entries for our Tank of the Month contest. For December, we will be featuring tanks sized at 16 gallons and smaller. If you have a tank of that size, we hope you enter it in the TOTM contest.
OP
OP

Only a couple of hours for the poll so if you havent yet voted, NOW is the time!

Our Tank of the Month contest is now accepting entries for 16 gallons or smaller tanks.

POLL IS NOW CLOSED! Tank of the Month :big_boss: PLEASE VOTE! We have 8 awesome tanks entered in Fishforums' December 2021 Tank of the Month contest featuring tanks sized at 16 gallons and smaller. View all the tanks and descriptions below and then go to top of this thread and click on...
www.fishforums.net
You must log in or register to reply here.

When is necessary to have a micro electrical plant as a backup against the energy cuts?

A
Silver dollar and white skirt tetra with Parrots??

Turning my 50g from artificial to real plants!