​
PLEASE VOTE!
We have 7 awesome tanks entered in Fishforums' August 2022 Tank of the Month contest featuring tanks sized at 31 US gallons and larger. View all the tanks and descriptions below and then go to poll at the top of this thread, click on your choice for TOTM, and then click the "Cast" button.

Please Note:
Any attempt to influence competition results, other than by casting your allocated vote, is not permitted and may result in your entry being removed and / or further action being taken. You are not allowed to have friends or family join TFF for the main purpose of voting for you. This is a public poll so source of votes can be viewed.

Winner will be awarded a neat "Tank of the Month Winner" banner in his profile area and will be featured in a "TOTM Winner" thread for all to see and to comment on. Winner will also be added to our TOTM WALL OF FAME 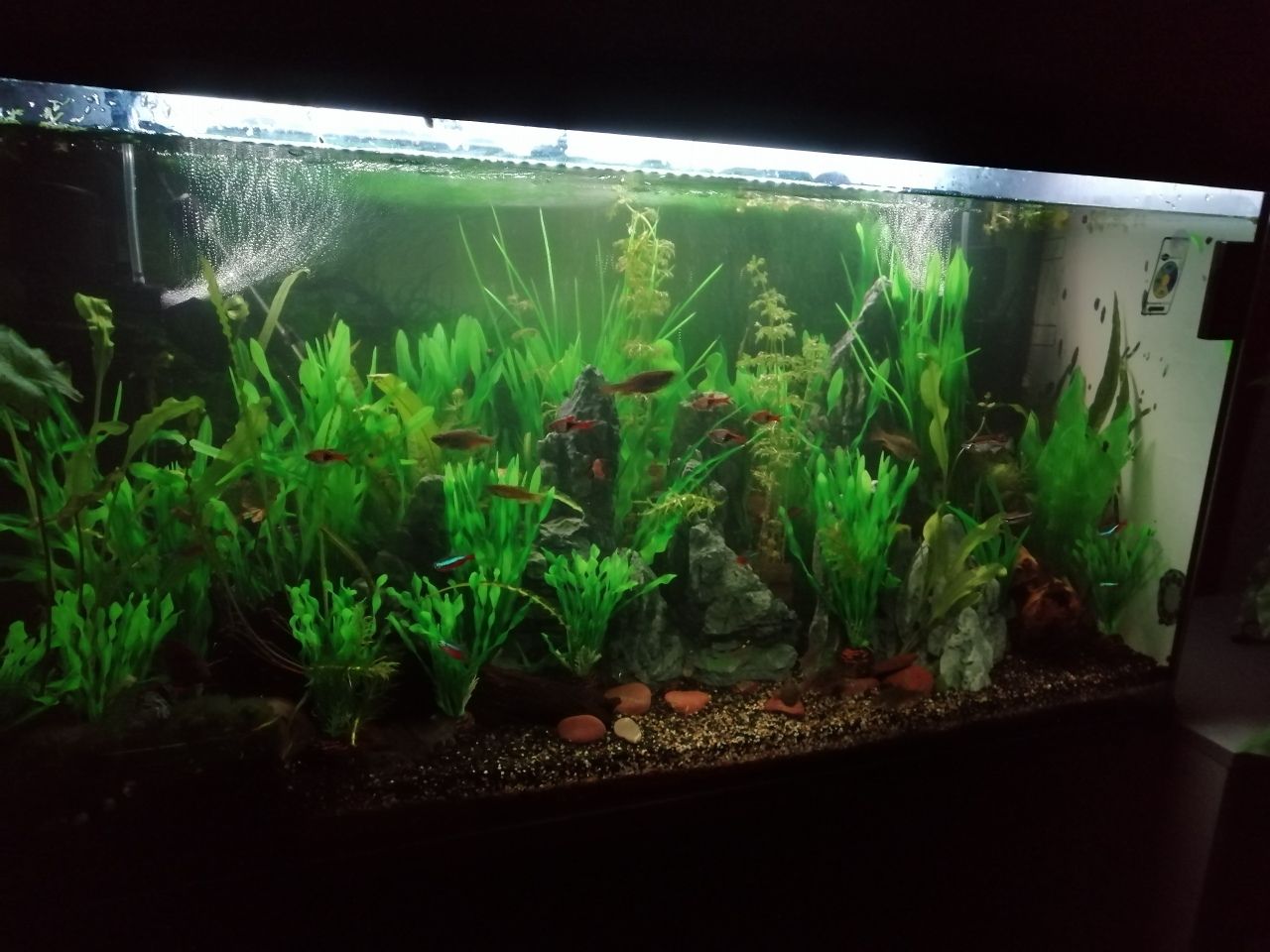 We have a mix of real and silicone plants (I asked Pro-Shrimp to match the water and aquarium size and just send a couple of handfuls of different plants that even I...the resident plant killer...might manage to keep alive - so I admit that I have no clue what they all are)

I have Hugo Kamishi Rock Pack #6, Hugo Kamishi Black Fine Black Glass & Hugo Kamishi Natural Riverbed Sand as substrate. On the far left I have 7 Superfish Ceramic Caves of a variety of sizes. There are also a few bits of Mopani here and there too.

I use only Highland Spring bottled water. No fertilisers, no water conditioners, basically zero additives at any time.

Filtration comes as two AquaEl Turbo internals....left side 1500 lph, right side 500 lph. Across the back is a 400 lph air curtain.

Maintenance consists of filter media servicing as/when it requires...basically if the venturi stops, I pull the filter and give it a good going over, replace the media as needed etc. Water changes are 30% Wednesday and Sunday mornings. Fasting Wednesday & Sunday mornings.

So there you have it...a wild and woolley fishy reproduction factory....they must be happy and healthy since they never stop reproducing
Last edited by a moderator: Aug 5, 2022
R

Hello all! Im presenting my 135G heavily planted tank. It was setup.on July 2021, so its just a little over a year old.
Substrate is consisted of various substrate I got from another hobbiest. I think it has Eco, controsoil, Amazon and Stratum. Its capped with a little black sand.
WC are done every Saturday with 80%RO and 20% tap. 50G of water is changed. Sometimes higher if I find my nitrates are a bit high.
I mix my own fertz and dosed daily using an auto doser.
Feeding of fishes is daily with a variety of food. Frozen, flakes, pellets and freeze dried. Fishes dont typically have the same meal twice in a row 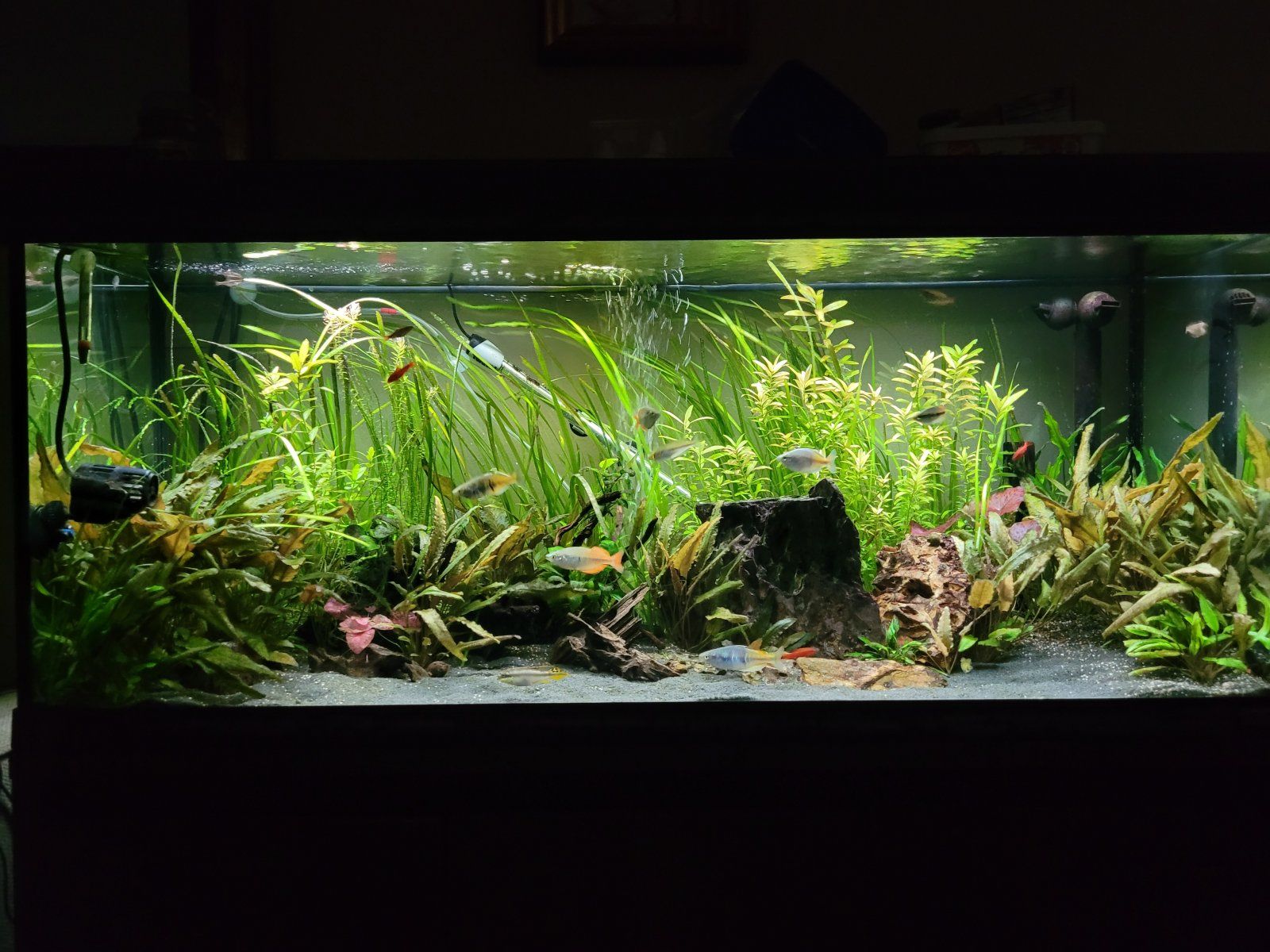 Okie kokie....so this is my one and only tank, 240l fluval Roma. I absolutely love it now that its maturing and at this point it's pretty much doing its own thing.

It's filtered with the canister that came with it, same with the heater and the light. Water changes now at this point are less than 50% weekly, and I fertilise with TNC lite. I also stick in a few root tabs when I feel the plants are lacking.

Stock consists mainly of Boesmani, Praecox and Parva rainbow fish, a kribensis breeding pair, cherry barbs and few amano shrimp and snails. I like to feed them every other day but recently have increased to mostly once every day with a fast a couple of days a week. We have very hard water where we are, I've never actually tested myself but got the numbers from our water supplier.

Plants are mostly crypts of all kinds, polysperma hygrophila, anubias, red tiger lotus, crinum, vallisineria and something else I don't know the name of.

So there we are, not much else to report! I don't like faffing and apart from the regular water maintenance and the compulsory trimming, the tank runs itself
Last edited by a moderator: Aug 5, 2022 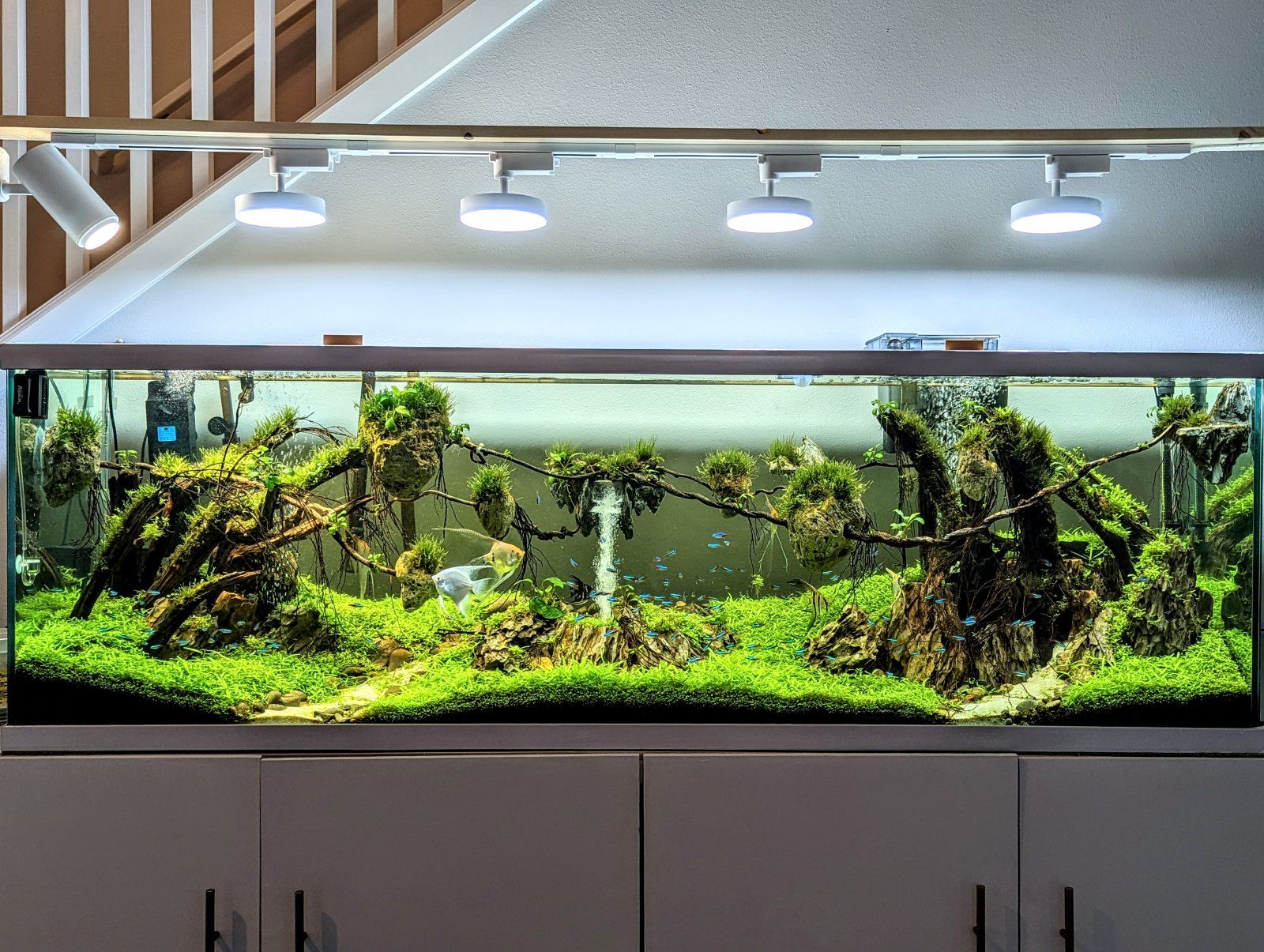 Avatar floating island tank
Size 150 gallon
Filter. Forza UV 13 plus a hang on back filter
Plant. Mainly moss and anubias and bucephalantra S repen and some carpet plants from seed.
Stone and feature: dragon stone. Volcanical floating rock, ryo stone for the water(sand) fall
Fish: 150 neon tetra, some angel fish and ottocinclus. Also got some mystery snails I'm there. recently angel fish laid egg and all got hatched I have 60 plus fry now. I entered this tank in may. But it was not ready with fish yet. But now it is a living eco system and the plants are just thriving. A lot of trimming every month . Haven't got a single tetra died yet for 4 months. That is a success for me. Haha.
Last edited by a moderator: Aug 5, 2022 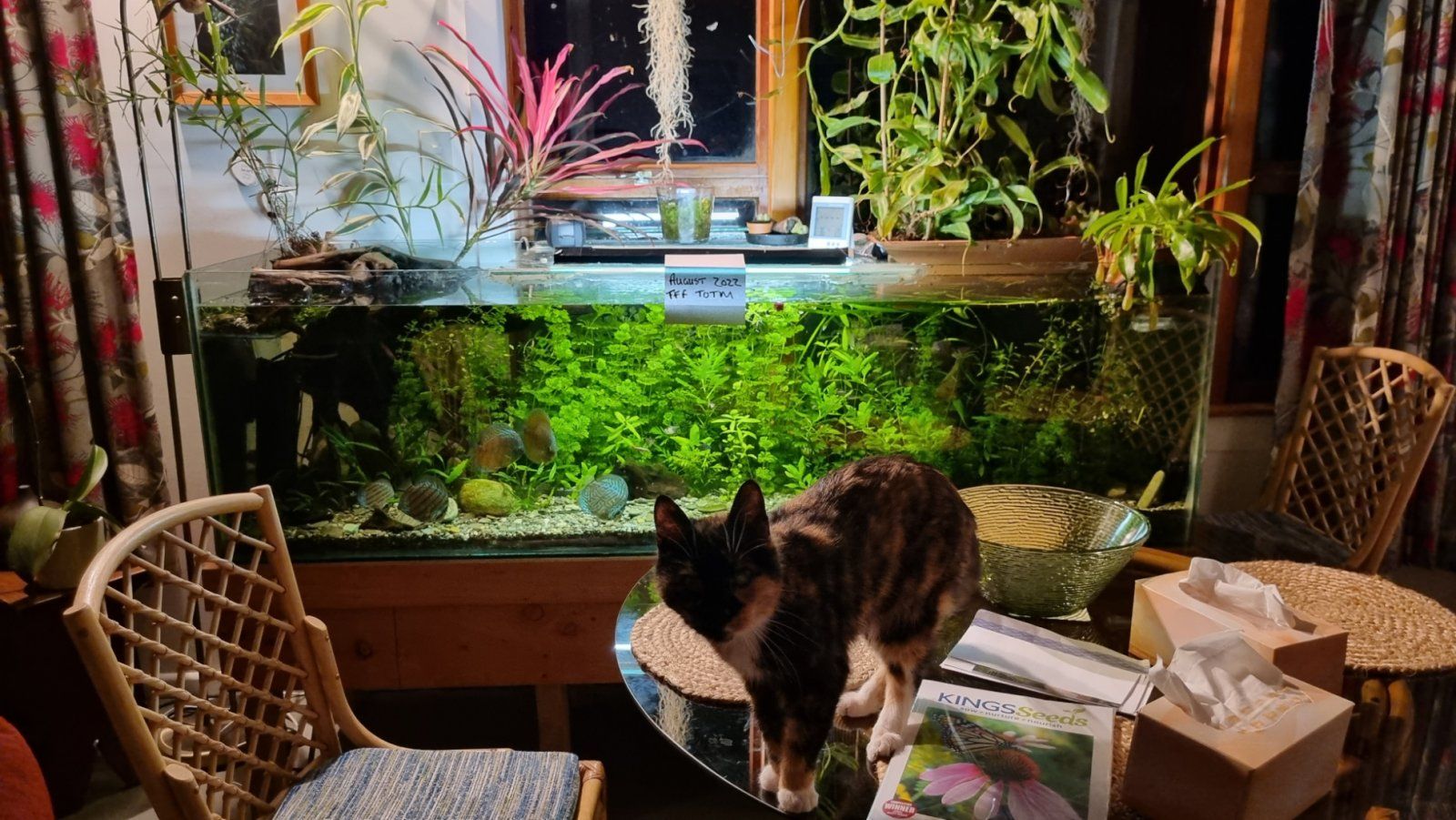 Here is my all natural 150-gallon Discus tank. Home to 5 Turquoise Discus, 20 Black Phantom Tetras, 5 White clouds and two Royal Whiptails.
This tank is featured in my threads "Here I go again 150 gallon reset" and "Discus rediscovered " I hope you have enjoyed this tank over the last 8 months, and it is still very much a work in progress. I have six pygmy catfish arriving this week to complete the fish population, hopefully they will spawn like the Black Phantoms and over time I will get a nice size school of them.
Excuse Iti she just loves being the center of attention.
C 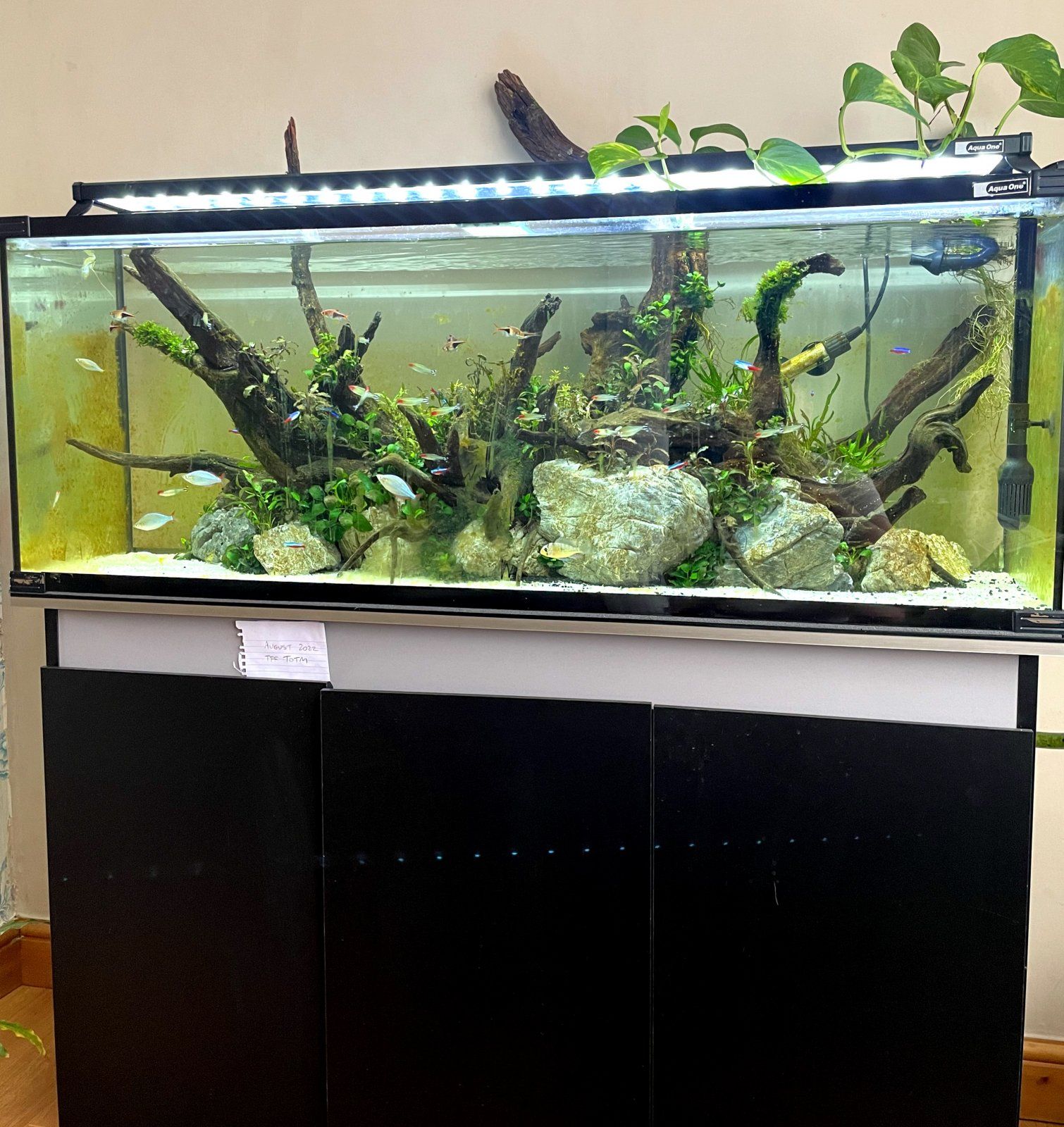 Seeing some of the other tanks entered this month I wasn’t going to enter.. man they are all stunning.

In comparison here is my pretty dirty newly scaped 200L tank. Broken down due to moving home and since the house move was a delayed nightmare on the day, unfortunately the filter media/bacteria much like my entire red cherry shrimp colony didn’t survive the move and so I’m back to square one with cycling the tank, it’s been back up for only a few weeks - hence a fair bit of algae at this stage.
Fish are happy and healthy, water is stable with nitrates rising but doing large water changes to combat the algae at this early stage of the tank.

As much as I loved it, my old scape was majorly overgrown so I’ve scaled back the plants a lot to allow more room for free swimming for the schooling fish.
Plants include anibius variety’s, buce, crypts, rotala and Christmas moss with some pothos growing emersed.
Heavily stocked with 1 male betta, 1 Pearl gourami. Harlequin rasboras, rummynose tetra, cardinal terra, corydoras, dwarf neon rainbowfish, Bolivian ram.
The betta was in his own tank initially but due to the move, was added into this tank initially to make the whole process simpler , but is getting on with everything in the tank and left alone.

After having the Bolivian ram for over 8 months, they recently bred and fry got to free swimming stage before being picked off by other inhabitants. I’m thinking the warm weather we’ve had here in the Uk which was warming my tank to a good 80c one day caused them to spawn.
My fish time ever seeing their breeding behaviour and it was super fun to watch. 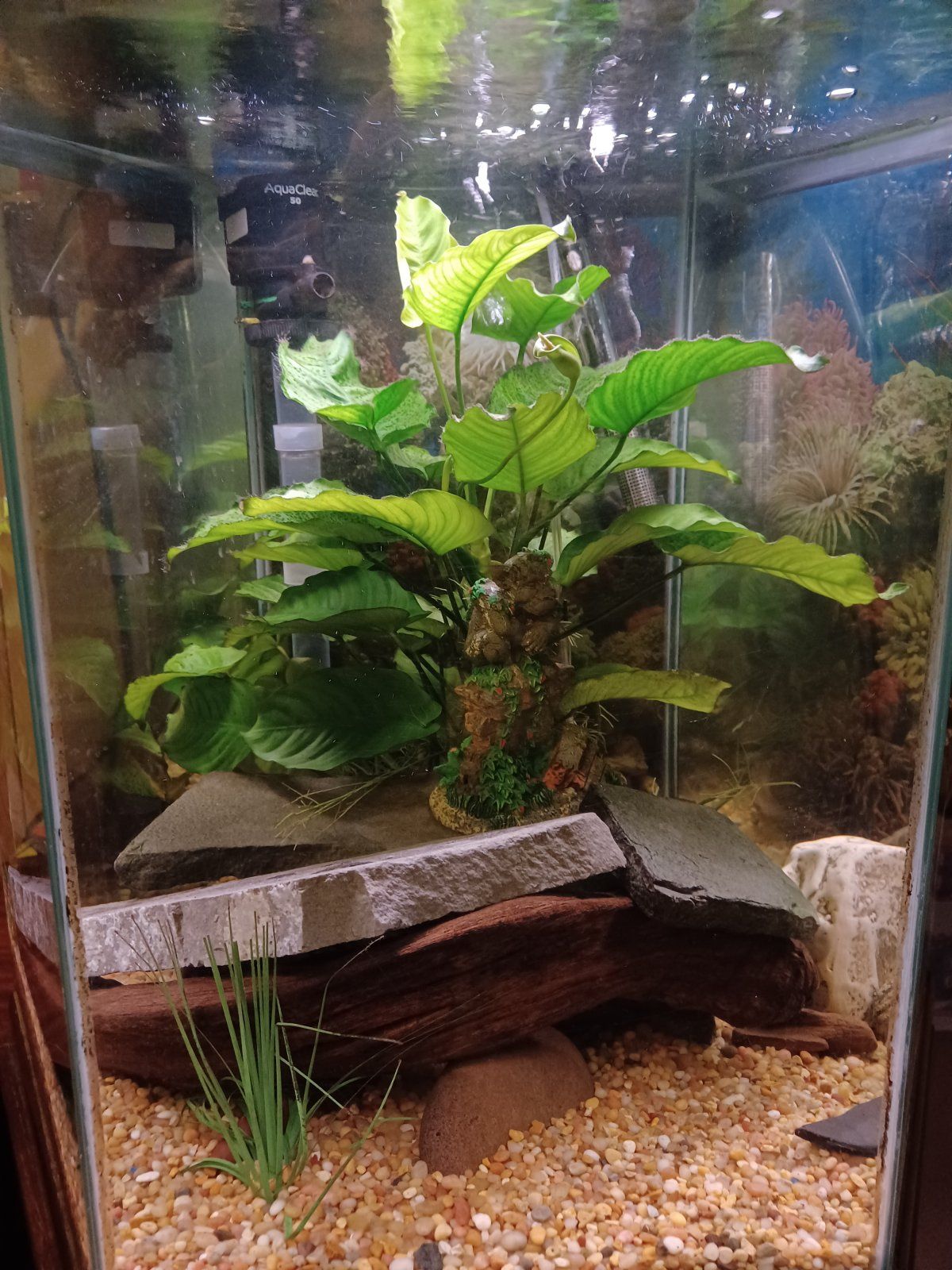 My 38 gallon Hex was restarted in 2019 after neon tetra disease had pretty well wiped out all occupants. It affects a lot more than neons. The tank presently holds about 20 nondescript guppies, and a male and female albino bristlenose pleco. The plecos are the stars, the guppies are just kind of there, the population control crew moved out for different tanks.

Filtration is undergravel driven by a Hagen 402 powerhead with an air driven sponge filter for polishing. Maintenance is monthly. The tank does well, only algae problem has been some red brush when monthly got up to about 3 months and the female albino BN has been cleaning that up.
Lighting is a Pennplax Aquari-Lux bulb in a standard fluorescent fixture. Live plants are all anubias at this time, no dirt, no fertilizers, no pots, no aquatic soil-less mix just gravel and water and UG. Driftwood is a recent addition, thought the bristlenose might enjoy it. There is a breeding cave in the tank for them. I have not even tested nitrates, I'd be surprised if they are over 30. Last water change was about 10 days ago
Last edited by a moderator: Aug 5, 2022
OP
OP

End of Entries:
Please scroll up slowly as you review the 7 awesome entries and in the poll at the top of this thread, click on your choice for TOTM. Then be sure to click the "cast" button to register your vote.

Just wanted to say that from a photographic perspective, this picture is really interesting. There are vertical lines on the cabinet. Then horizontal lines on top of the cabinet, tank and light fixture. More vertical lines with a diagonal line going up the stairs, and it's a different colour so it contrasts to the white wall. And 4 circular lights. Then there is the tank but this is just a really interesting picture from line perspective and contrasting colours. You could make a jigsaw puzzle out of this picture.

O
what is this in my tank is it snail eggs

I have some plants for sale

N
Tetras with white spots on body and moith

Most difficult fish to catch!