I am in the process of working to stock my 125 gallon tank, and trying to do my due diligence by not tossing everything directly into the 125 from the get-go, but instead putting everything through the 20g quarantine tank first. The 20g is relatively heavily planted and has a resident population of 1 mystery snail and ghost shrimp (the ghost shrimp were originally destined for the 125 but after they were done with their quarantine I could only catch one of them, so it remains a work in progress I suppose....).

on April 14th, we introduced 7 corydoras paleatus and two firemouths to the quarantine tank. The firemouths are tiny (around 2''), but I tried for two males because hubby really wanted a FM male and I didn't want a breeding pair. Though it's difficult to sex them still, I am quite certain that I have at least one male, because the coloring on the smaller fish is incredibly vivid, and it has the red gill extensions that it flares every once in a while. The larger of the two fish I am unsure about, but I suspect it is a female because it's fins are not as "pointy", but difficult to say.

It seems that the firemouths and cories have settled in at least adequately, there is (knock on wood) zero aggression from the firemouths towards the cories, and the cories are derpy and active and happy as can be.

I am wondering about the firemouths' interactions with each other however, since the larger of the two firemouths (which is much paler in color and has more rounded fins) seems to be frequently chasing the other one around the tank. She(?) has taken residence in the main cave in the tank, and as long as she doesn't see the other firemouth things are fine (though she seems to be an 'anxious' personality, she is up against the edge of the glass a lot, and she occasionally bites the snail or harasses the shrimp). The problem is that she has also effectively relegated the smaller of the two firemouths (who seems to be unmistakeable male) into the back planted area of the tank, and he spends most of his time trying to stay away from her it seems. The male seems to want to get close to her, but she is always just attacking him. She doesn't seem to be actively searching for him, but whenever she happens to be swimming around and sees him, she immediately goes for him and tries to nip him and he dashes away.

This morning, I noticed that the male's tail fin was torn, and I'm certain it was caused by the larger (female?) FM.

My questions are:
1) is this a wait-and-see thing, where they will learn to coexist in quarantine if I give it a few more weeks? (it has been 9 days now)
2) will this behavior decrease / will the male have an easier time at life in the 125g?
3) why does the smaller (male) fish have the more vivid coloring (gorgeous reds and blues and even the vertical black lines), whereas the larger (female?) fish is more bland/pale looking? She occasionally gets her horizontal stripe across her body, but most of the time she just looks "stressed", and that confuses me since she is the one behaving more aggressively (the male is not seeking her out, and the other tank inhabitants leave her alone, and she has control of the large cave in the tank)
4) Do I need to be doing something differently? I hesitate to move one or more of the fish into the 125 since I am really hoping to do a full 4-week quarantine.


I know that Firemouths generally prefer the company of their own species, so my initial goal was to have two males since I don't want them breeding, but I'm confused with the outcome of things thus far. I know it hasn't even been two weeks yet and things could still change, but the smaller male seems so incredibly chill and cooperative, and the larger female(?) just seems like a spaz, so it's hard to figure out what the best course of action should be. How much of these behaviors are caused by the relatively small space of the 20g QT (though the fish are only about 2'' currently), and will the behaviors be ameliorated when I transfer them to the 125? Is there a risk that one of the fish might not survive the quarantine? I know cichlids can be unpredictable, but things do not appear to be "bad" at the moment.

I can post some pictures after I do a water change today, I need to clean the glass to get some reasonable pictures of the tank.

Could you post pictures so we can see the size difference, coloring, and injuries?
OP
OP
M

ok so water change is done, and as promised I took some pictures. These are some truly terrible shots so just a fair warning.

Since the water change, the smaller, "male" is even more calm than before, and is a little bit more out in the open. He is seeking to be in the company of the "female", but not in an aggressive way, he just rolls on up to her when he sees that she is around, but she chases him off and tries to nip him and then he goes and hides. The "female" is back to her antics of glass surfing every now and then and just in general seeming anxious, but only attacks the male and the occasional glass shrimp, leaving the cories completely undisturbed.
The "male" in general seems relaxed and mostly minds his own business and picks at the substrate or plants or driftwood and swims around showing his beautiful red belly and gill flaps, and seems to like to observe the world.
The "female" on the other hand appears to be busy trying to attack her reflection in the glass, and tries to have a go at the "male" whenever she sees him. Whereas when the male sees the female he puffs out his gill extensions and tries to socialize with the female, only to be nipped at and chased away.

here are some pictures of the "female": 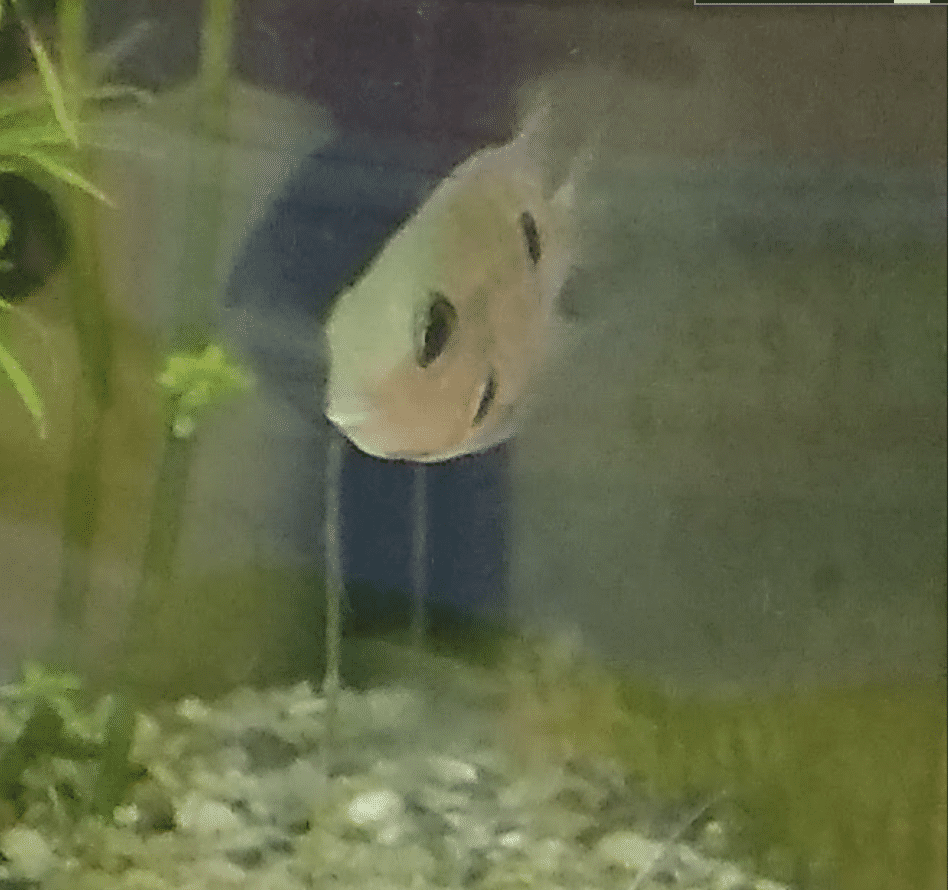 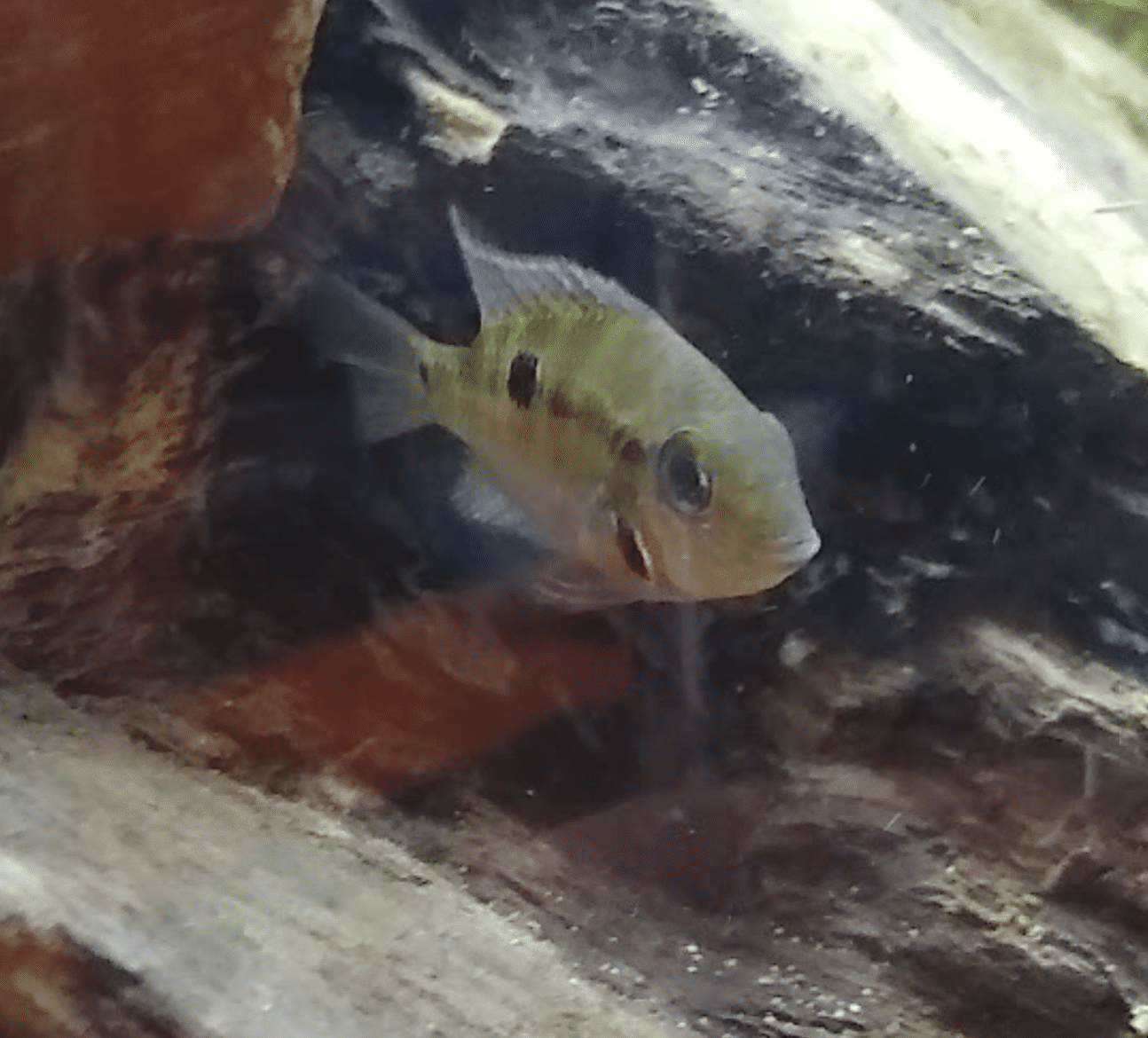 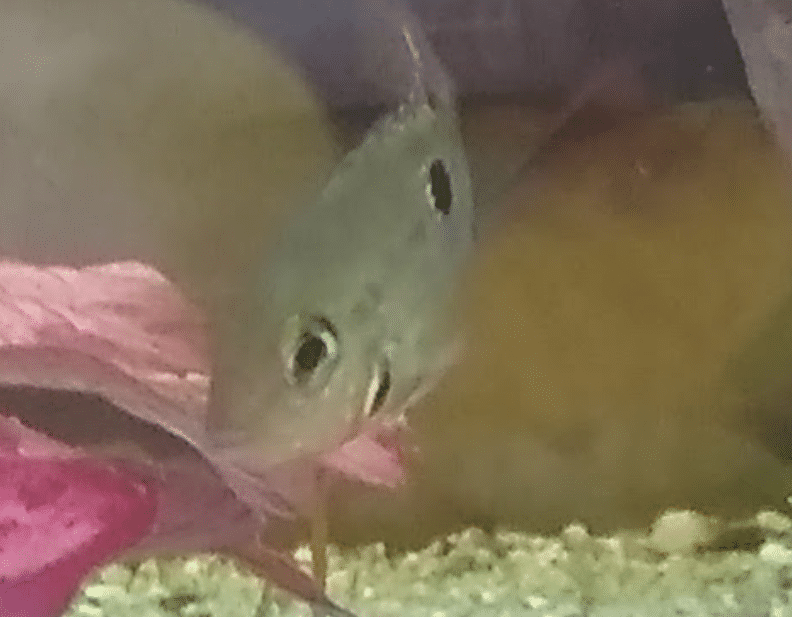 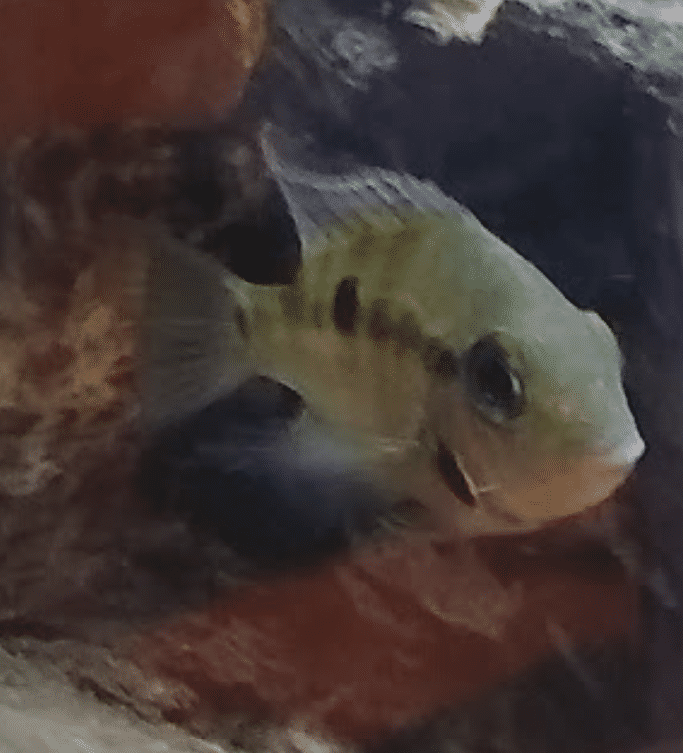 This is a picture of the "male": 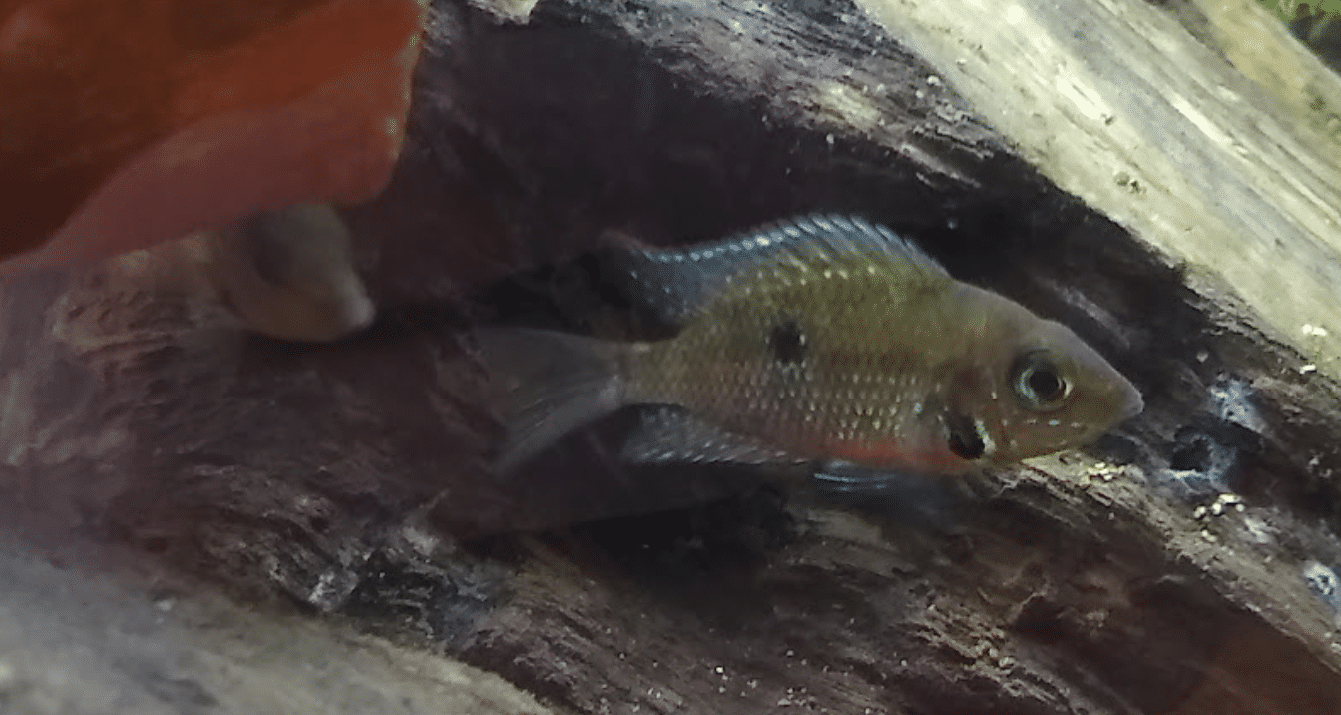 these are pictures of both of them. The only times I was able to get them into the same frame was a second before the female chased the male away. Here you can see that "she" is in the process of turning around to have a go at him:

here he is displaying his gill flaps to "her", only to have her chase him away a nanosecond later. 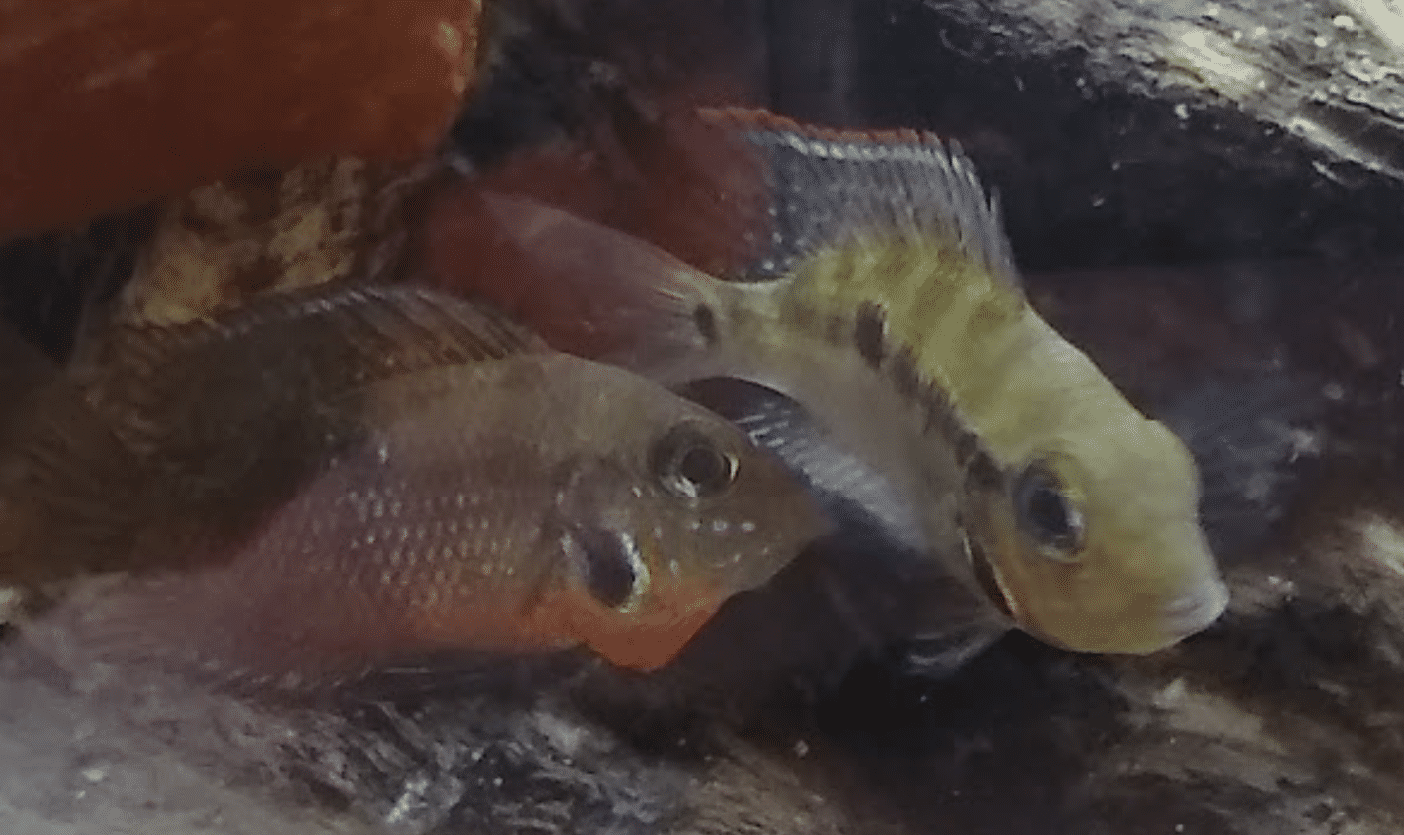 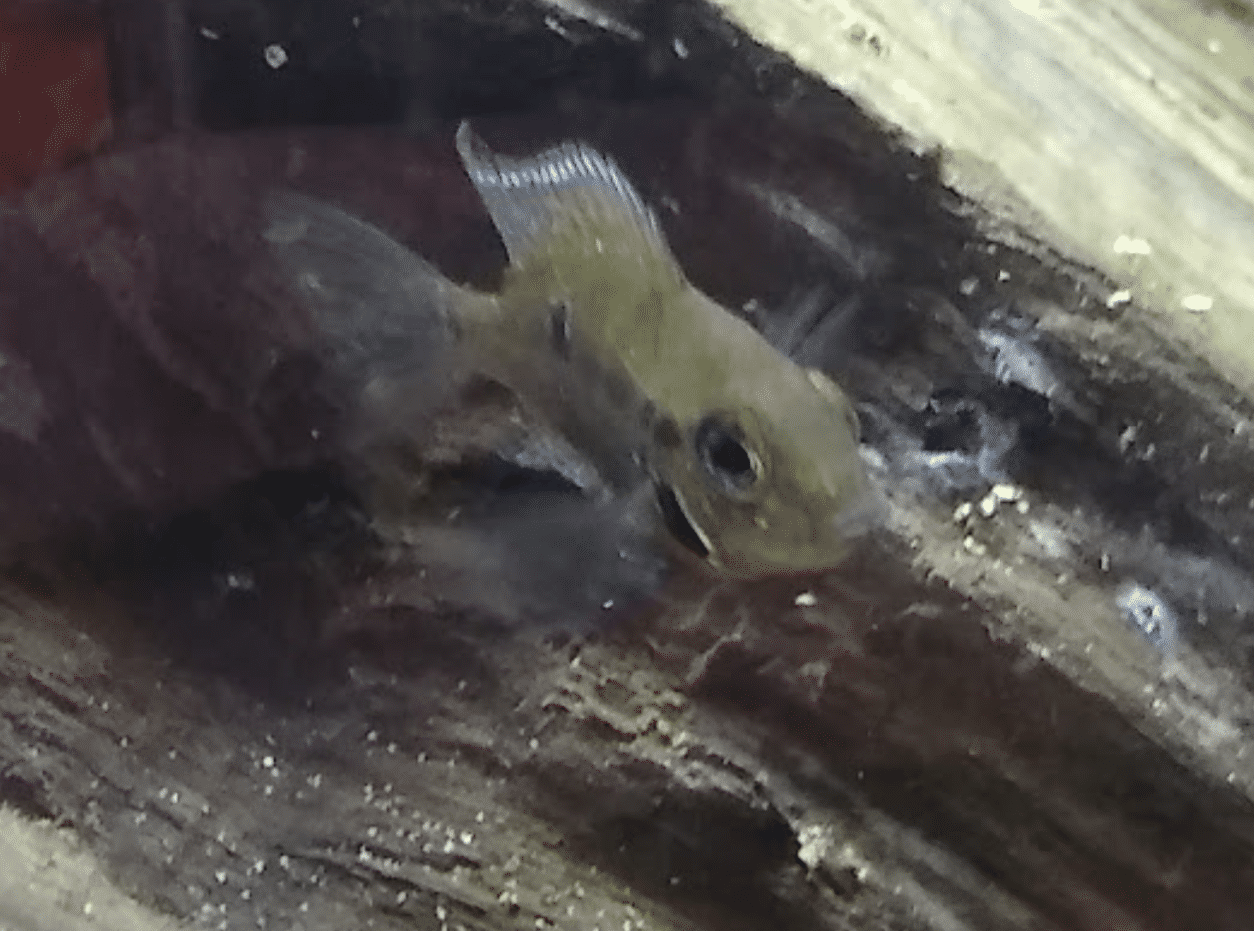 Beautiful fish! I'm not really a cichlid person, so I can't help too much aside from general assumptions. I think you're right that there is a female and a male. I believe most aggression will be mitigated when you put them into the larger tank. The sooner the better, just make sure you watch very closely for any physical damage. If she's seriously starting to beat him up it you'll have to separate them.
You must log in or register to reply here.

L
Stocking ideas for this aquarium?

Today at 5:21 AM
Lucidahandwriting
L

betta sorority. how many girls to add?