Origin: This species has a wide range from North, Central and South America to Japan and even the Galapagos islands. It is probably found elsewhere but recorded as different species, and it's likely there's actually quite a few subspecies that presently just get recorded as bog standard T.longicaudatus.

They live in temporary (vernal) pools, which are basically small ponds that dry up in the middle of summer. They can also be found in rice paddies and river basins - anywhere that gets temporarily flooded.

The ones purchased in kits are of North American descent, bred in ponds or tanks. Depending on who produced the kit you bought, you may get either a long or short form of the species (see pictures).

Maximum size: For T.longicaudatus, 2" excluding the two rami (the two long pointy bits coming out of tail) is about as big as they get.

Care guide: Very easy, but he pathetic little tubs that come with the kit's aren't recommended, though they will do, the triops tend to grow smaller and live shorter in them. Disasters are more likely to happen in them too.

Get yourself a cheap plastic or glass tank (food-grade containers like Tupperware are fine too) of volume between 1-5 gallons, and some chlorine free clean water (bottled or dechlorinated). Distilled, deionised or RO water give the best hatch rates since they simulate rain water, but are not essential.

Sand or gravel is good because it gives them something to dig in and lay their eggs in. A small filter makes things easier later on, especially in smaller tanks.

You will need a light source, for growing food for the tiny hatchings, a desk lamp is fine. Try not to let the water get above 30*C, or below 10*C at night as this can kill them.

Put in the eggs and detritus (this comes in a teabag in some kits, while other kits supply the eggs in the detritus) and fill the tank halfway to a quarter with your water. If you bought the eggs in sand, you will need detritus (this is where the triops first food- algae and infusoria - come from), dead plant leaves or filter mulm from a fish tank are great for this, if you don't have a fishtank, try finding a pond or clean puddle and taking a small amount of dirt from there.
For the fist two days, keep the lamp on 24hours to speed up the process - triops eggs wont hatch in the dark. If you don't want to keep a lamp on, that's fine, but it may take longer.
After the two days, keep the lamp on for as long as you want during the day, but generally less than 5 hours will be quite bad as lgae could die off and pollute the tank. Also after these two days, fill the rest of the tank up with water (if you used distilled, deionised or RO, use normal clean water for this, and do fill it up over the course of a couple of days to avoid major fast water stat fluctuations).
Start feeding them as soon as they look like tiny versions of the adults. Water changes are not needed and can sometimes be detrimental, but you may want to add a small filter as the triops get bigger (because at some point point the micro-organisms and algae may not be able to support this little eco-system on thier own).

Feeding: Triops will eat anything really, just don't feed anything that could pollute the water. Fish or shrimp food is the best, sinking pellets are ideal, but they will swim upside down on the surface for flakes. When they are small, anything you give them has to be crushed to an appropriate size.

Breeding: Very easy, they lay the eggs in the sand, andmost hatch out after being ddried and rehydrated for a period. Eggs can be stored dry for years. Hermaphrodite (able to fertilise own eggs) triops are the most common, but males show up sometimes too. You will notice males by the lack of egg sacs.

Lifespan: T.longicaudatus usually lives for around 50 days but there's an account online of one living for 100 days. If you set up a tank for them, you can have a colony going if you wait a few days to a couple of weeks after the last one dies. Some of the eggs they lay hatch at different time periods before drying out, but are usually eaten by bigger triops. To speed up hatching without tearing a tank down and starting again, doing a 50% water change (again, preferable with distilled, deionised or RO water) will give a lot of eggs the signal to hatch since it simulates more heavy rainfall. 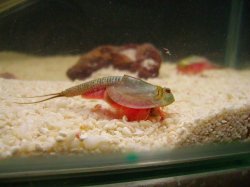 My previous lot lasted maximum 10 to 12 hours, but, I did put them in with fish, which harrassed them from the onset....(even the neon tetras went for them) Do you know anything about the colourless shrimp I found with these???
OP
OP

The colourless shrimp were a kind of fairy shrimp, cant tell what species without pics though.

I've raised them too, basically like freshwater Artemia but more colourful and bigger, usually between 1" and 4". Triops prey on them.
They hatch out the same way as triops, but need to be fed filter feeding food like spirulina.
You can buy them on ebay as betta and killifish food.

A couple of different types: