I thought i would start one of these so i could keep a track of what i am doing with my (my sons) tank.
So it all started when my son said he would like a tank for his 6th birthday. I have kept fish in the past, the normal tetras, a betta, goldfish etc all in tanks that were looking back too small. I had always wanted a bigger fish tank and had discussed it with my wife now and then but never pulled the trigger on one. My wife likes fish but she is never keen on the stands they come with.
So anyway with my son wanting one i started looking at them again, looking at new and second hand ones and ended up buying a used one off Ebay. It didn't have a stand but i decided i would follow a Youtube video and make one.
So its supposed to be my sons fish tank but that is really more of an excuse for me to have a fish tank!!
So the tank is 90cm long by 29cm deep and 40cm high, makes it about 100 litres. I made the stand following the Youtube video and overall I think it was quite successful. Its not really finished yet as it needs some kind of doors to hide the cables etc. Its not ideal and the wife doesn't like it at the minute but will get it finished at some point! 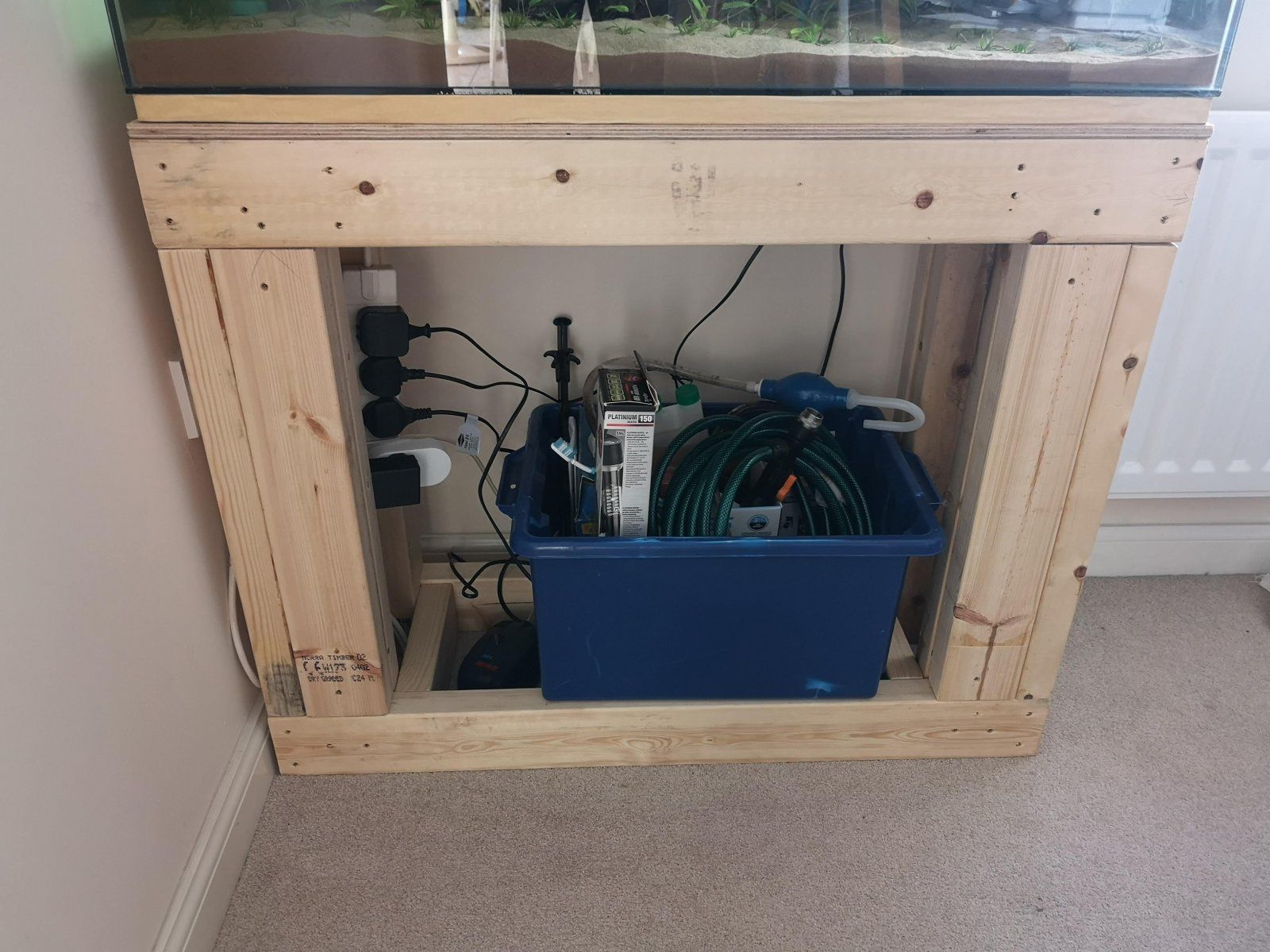 The tank came with a lid and florescent tube light which needed a new ballast and an internal filter. I decided to ditch the internal filter as i decided i wanted a bit more customisation to what media to put in the filter and also I don't really like the look of them in the tank. So after asking on here i ended up with a Seachem tidal 35, i have added some sponge to the intake as my son wants some shrimp in the future, i also added some more sponge inside as it has so much room.
After fitting it i realised the lid wouldn't fit without a lot of cutting and fiddling so i decided to leave that off as well plus I decided to go for an LED light as well which would have required some more cutting to the lid if I had kept that.
LED wise i went for the Nicrew skyled plus.
Heater is a Aquael platinum 150w.
So then i added a bag of Argos play sand a piece of driftwood and some plants I ordered from pro-shrimp.
Plants wise i purchased: Echinodorus magdalensis, Elodea densa, Ceratophyllum demersum Hornwort, Cryptocoryne wendtii 'Tropica', Cryptocoryne wendtii, Tropica Helanthium tenellum Green, Microsorum pteropus 'Narrow'.
So this was it afterwards, this was on the 25th of jan: 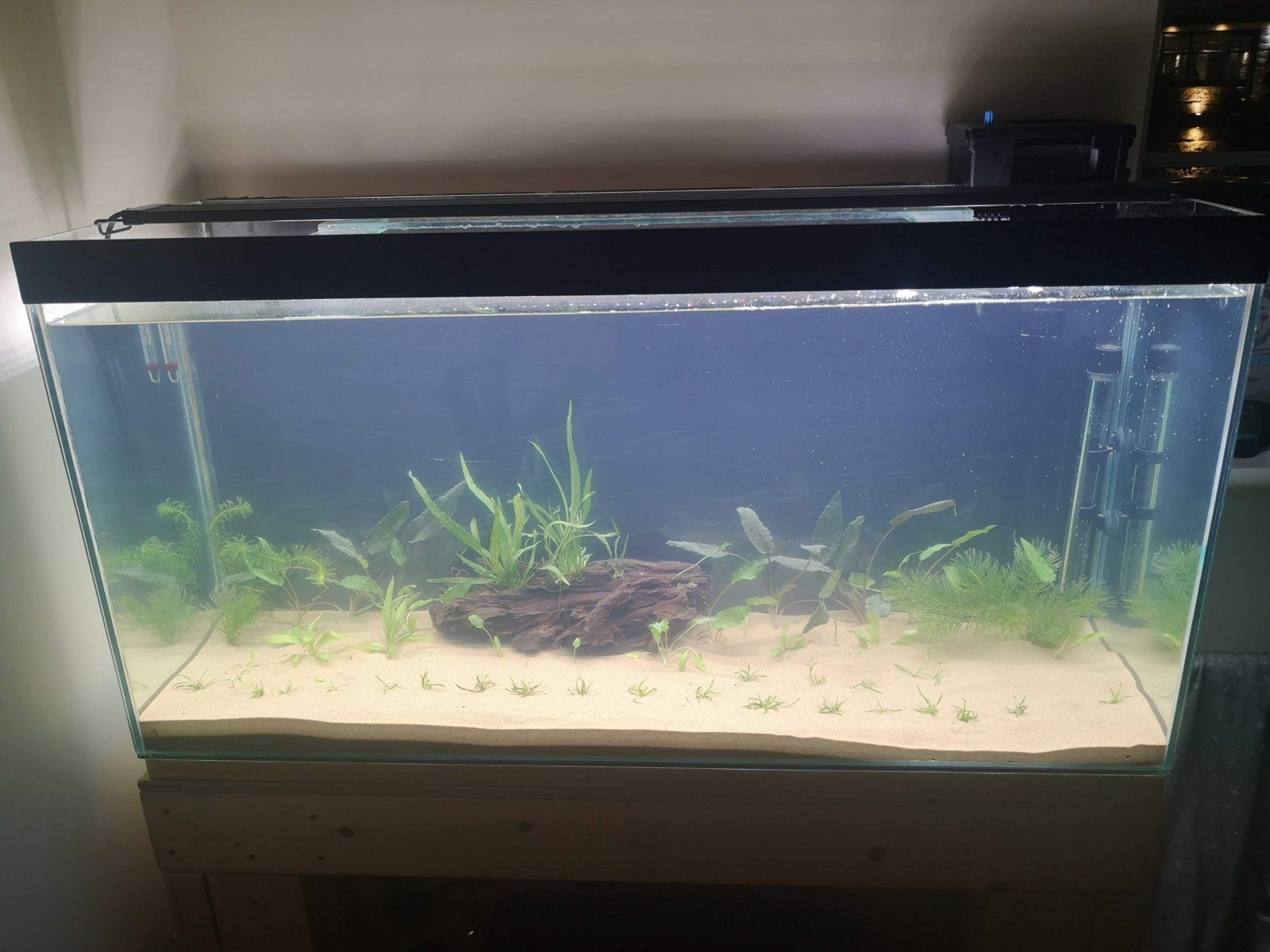 It was a bit cloudy as i must not have washed the sand enough.

So after a couple of weeks it looked like this: 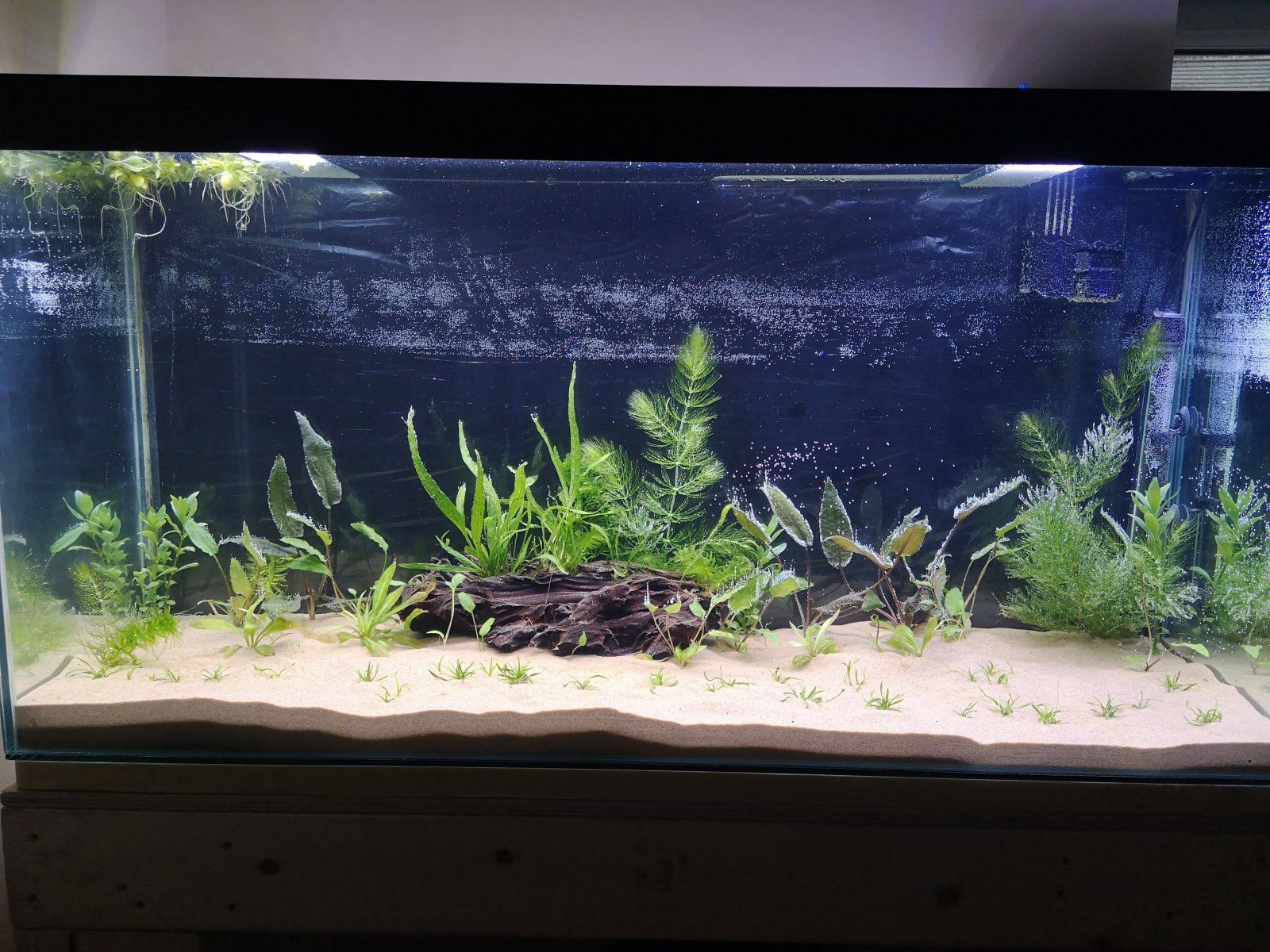 at this point i had added some Limnobium laevigatum, and some Hygrophila polysperma but after I posted the photos on here @Byron noticed some algae forming on the plants, so on his suggestion I reduced the lighting times and purchased some TNC Lite fertilizer to help the plants grow.
I then bought ten Hyphessorycon pulchripinnis (Lemon tetra) these have now been in for a couple of weeks and all the readings have been looking good so today i purchased ten Nannostomus beckfordi (Beckford's pencilfish) although going back over old posts it seems these were the ones @Byron didn't recommend so lets hope they don't terrorise the tetra's!!
I also purchased another piece of driftwood and some Vallisneria spiralis and Alternanthera cardinalis to fill the tank a bit more! Still waiting for the wood to sink in a bucket so no photos of this as yet. That's pretty much it so far.
OP
OP
T

Just remembered I also added a sponge filter, more so I could use it as a filter for a quarantine tank in the future hopefully. Also added a condensation cover as I was loosing so much water through evaporation with no lid!!

Oh and I added a black bin bag to the back until I get around to purchasing something nicer.
OP
OP
T

Seems to be, it was supposed to be going longer with just plants before I added fish but I added some on @Byron's recommendation. Readings have been 5 on Nitrate, 0 on Ammonia and Nitrite. Ph is 6.6/6.8

TofferMora said:
Seems to be, it was supposed to be going longer with just plants before I added fish but I added some on @Byron's recommendation. Readings have been 5 on Nitrate, 0 on Ammonia and Nitrite. Ph is 6.6/6.8
Click to expand...

Good....just keep a close eye on those params for the next several days...especially when adding more fish
OP
OP
T

Will do cheers
OP
OP
T

As it looks now: 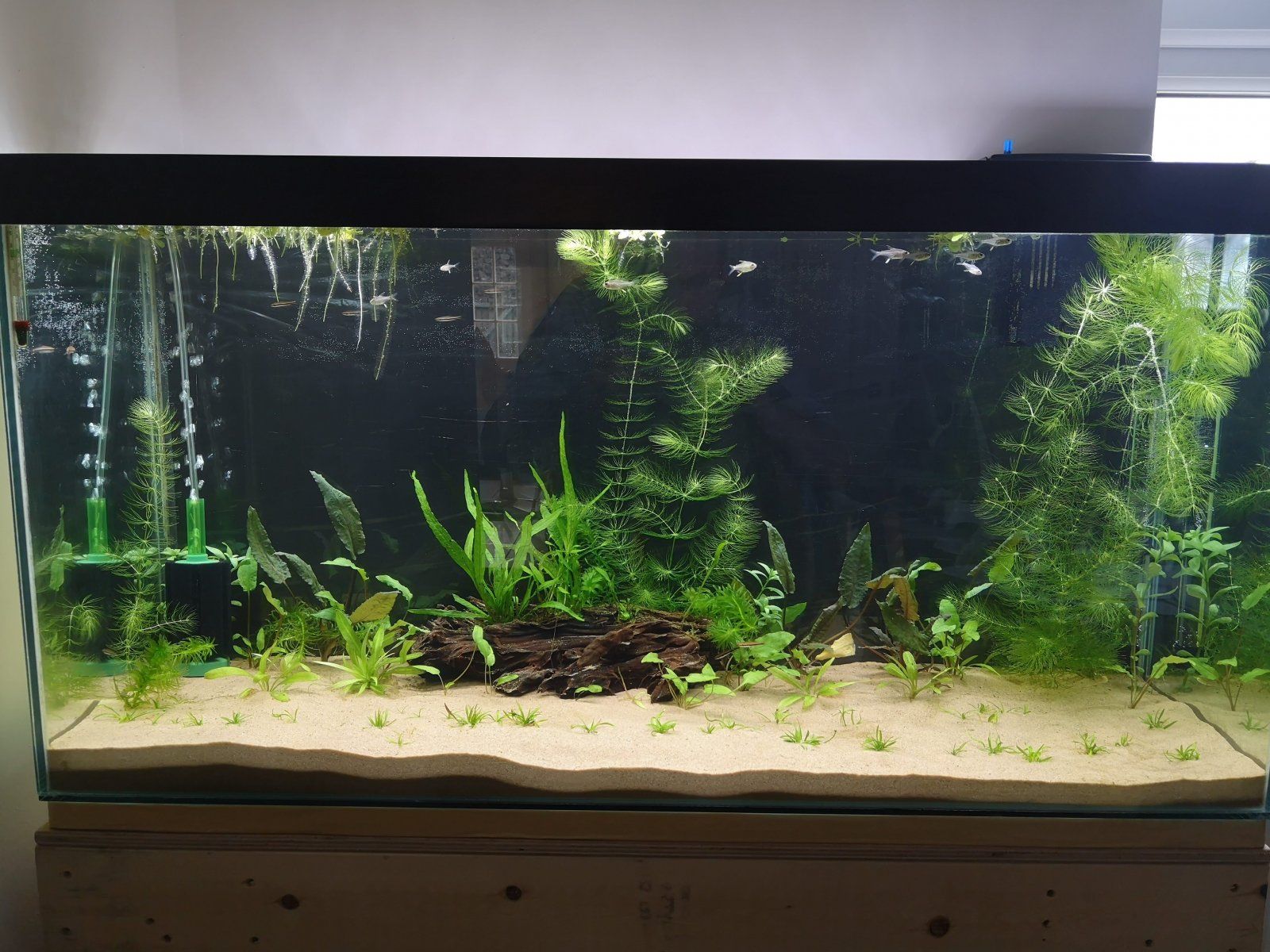 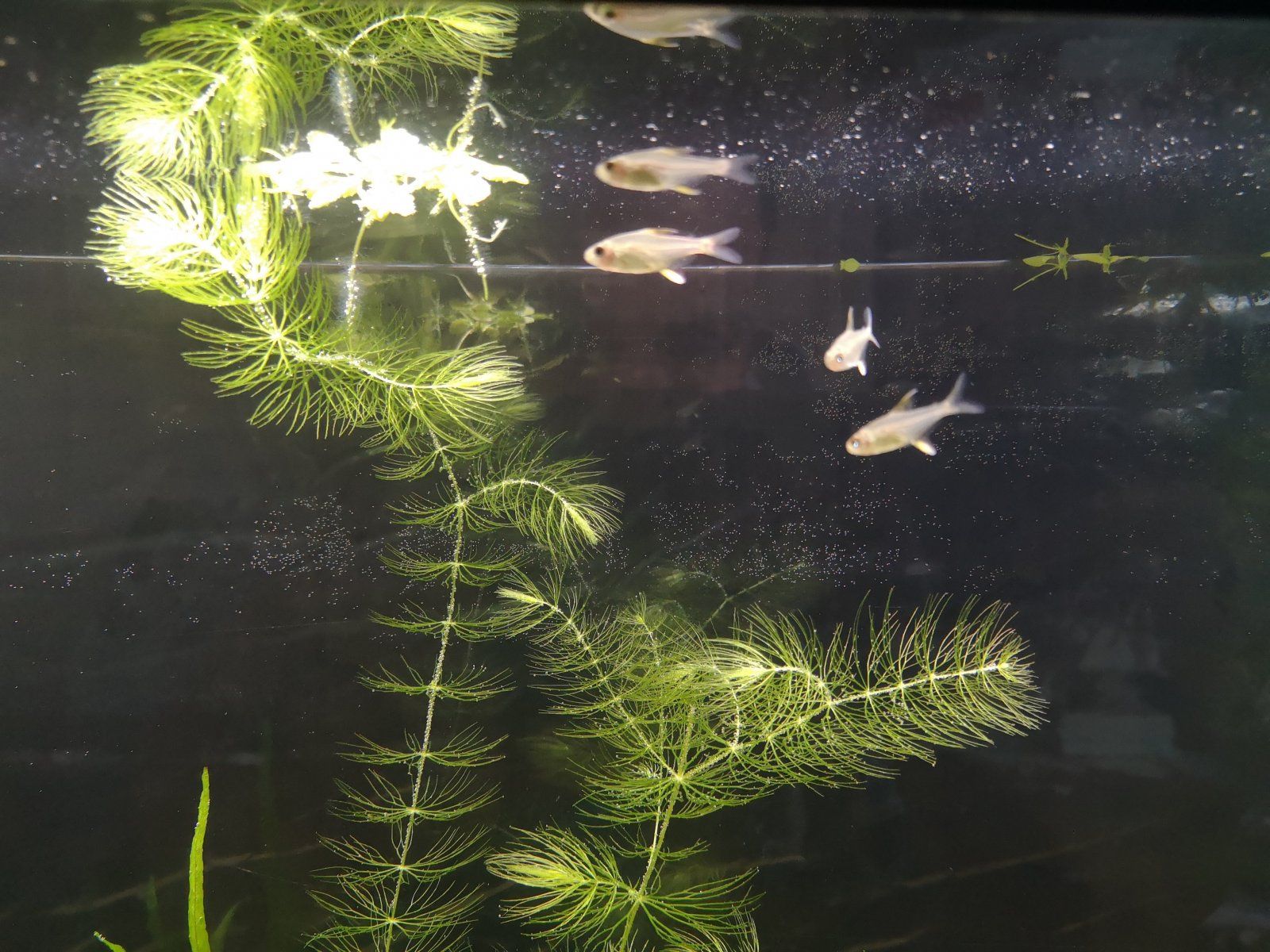 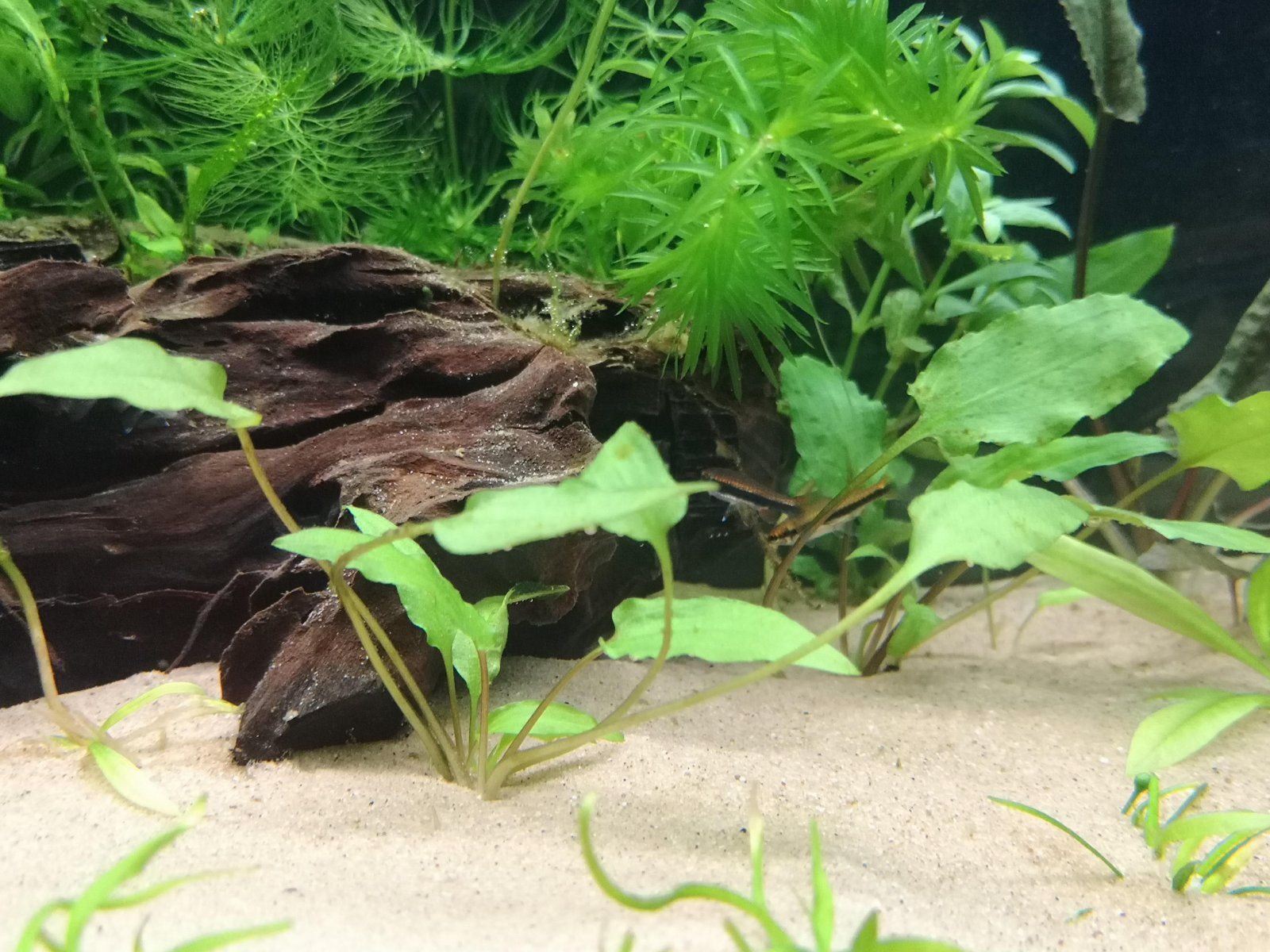 Did a water change last night and moved some plants around and added my other piece of wood. It's still floating a bit so had to weigh it down for now. Trying to get hold of some water sprite to add to my surface plants but can't get hold of any at the moment. 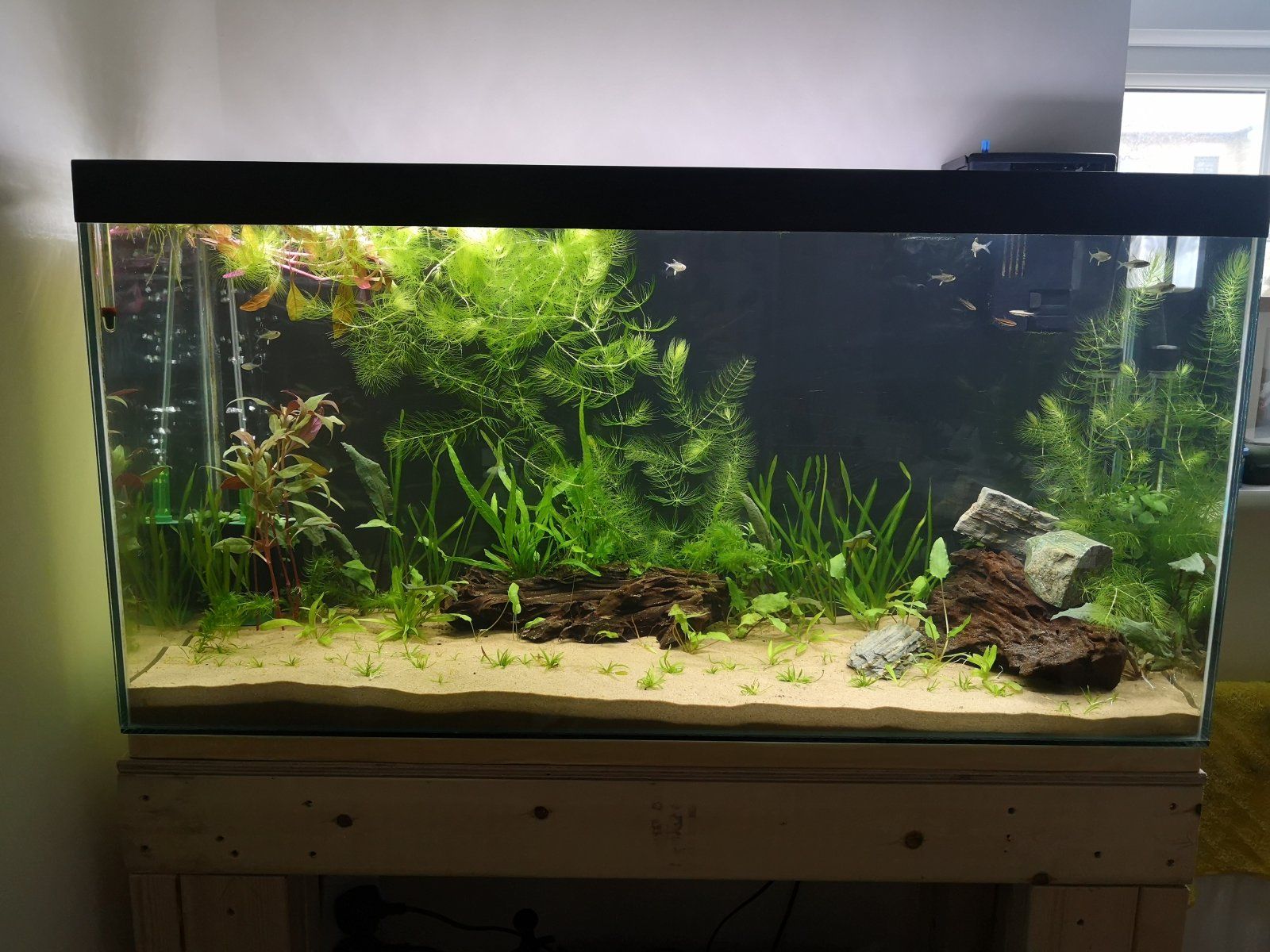 connorlindeman said:
I sell some water sprite but i can't ship over seas
Click to expand...

It's fine, I can get some here it just all seems to be the stuff that grows well in the substrate not the stuff that does better floating. Sure some will turn up soon or later.

I wasn't aware that some water sprite does better planted than floating. Mine is floating and planted. 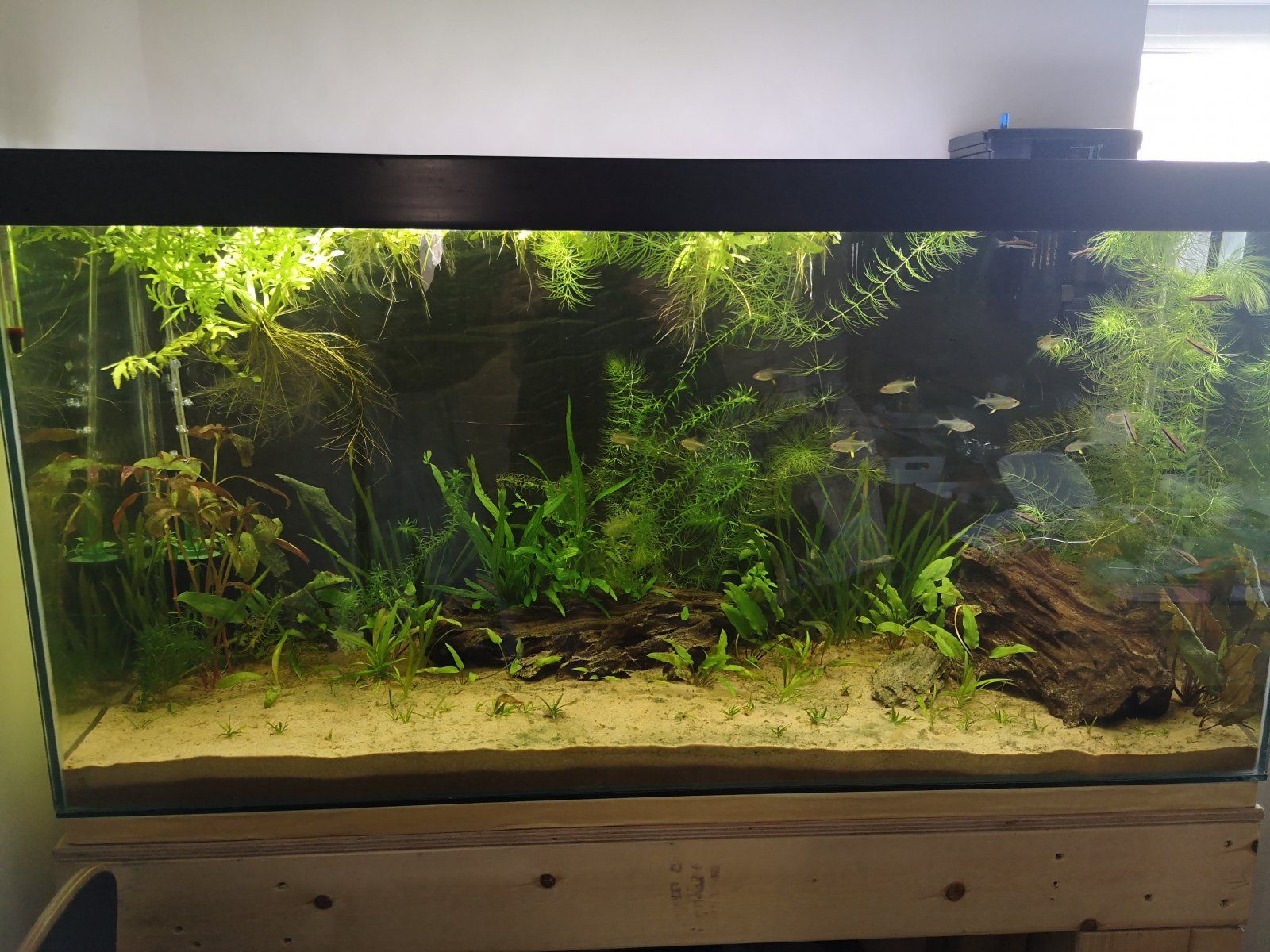 Getting there, need to deal with the algae on the sand and then may look at getting some Corydora
You must log in or register to reply here.