ok... my blue rams have never been the most active since I got them. They mostly liked to hide in or behind the cichlid cave. I rarely saw them except when it was feeding time... and even then they'd wait until I was well enough away from the tank before they'd sally forth. but at least I'd see them once in a while.

when I came back from my trip, I didn't see one at all... one would dart out of the cave every so often... but I didn't see the other one ever. Finally I searched and searched for both. I found one... but the other one seemed gone. I couldn't even find a dead carcass. Its possible it's still hiding in the cave cause when I tipped it over, nothing fell out.

Then I noticed the other one has pop eye which freaked me out. His colors are still amazing, he eats like a piggy and swims about as often as he ever did.

I tested the water levels with my master test kit and the levels are perfect. I even have the pH down to an acceptable level.

I did a waterchange and added mayacin for popeye... although now I'm questioning my diagnosis.

what could have gone wrong? There is nothing I can see in the water levels, I change the water about average (once every other week) I vaccum the gravel, the temperature is within acceptable levels (80 degrees), and I'm feeding a high quality cichlid specific food. Where did I go wrong with them? And what could have happened to the other cichlid? I can't even find a carcass.

I'm not sure what is happening with that tank. It would have been much easier if they were more active fish that I'd see more frequently... its just so frustrating. I've been extra careful with them because they are such sensative fish... (I've had them for about 8ish months?)

pictures of the fish... It was hard to get any because he was in the process of eating so he was moving a lot.

This is him looking normal on one side... 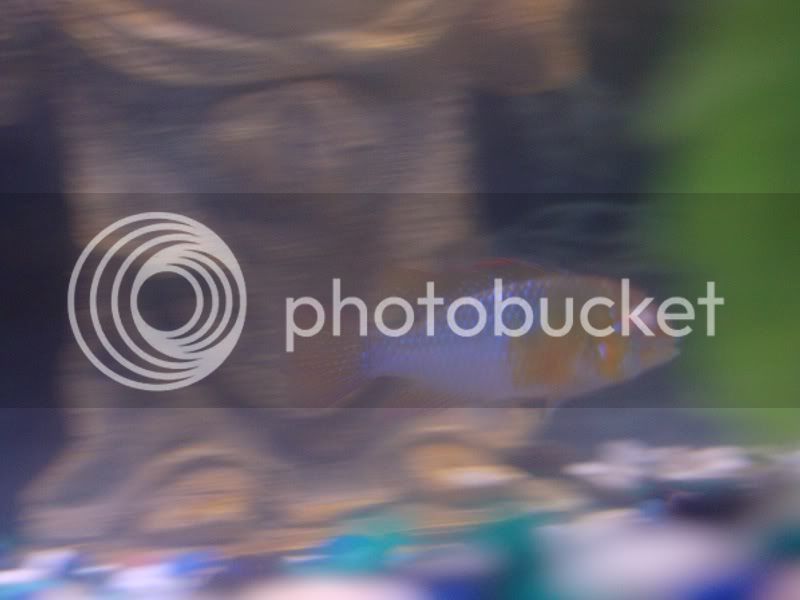 This is his otherside. (Its very blurry... but you can see there's like a bubbled film over his eye...) 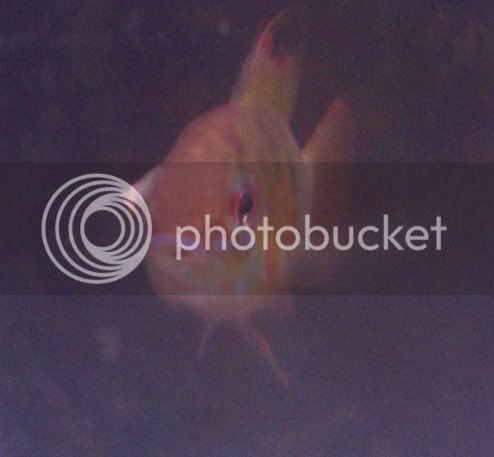 This is a front view... as you can see, one eye is normal, the other eye has this cloudy bubble over it. Its more like a growth than a popped eye... I just have no idea what it could be... this eye seems to be the only thing wrong with him.....

is it pop eye?

Is it an internal parasite bubbling through his skin?

my concern is tuberculosis... someone said this looks like the beginning symptoms. The eye "pops" out but the fish continues to act normal. I thought that was pop eye... but they said it could also be tuberculosis... so I don't know.

Is it something I should be concerned about when cleaning the fish tank? (I usually don't use gloves when I clean my tanks.)
OP

I should also mention...

The aquarium did miss a few regular cleanings... I was out of town babysitting my baby nephew. A friend and her husband were suppose to be in charge of taking care of my aquariums since they have aquariums and my mom is clueless as to caring for them herself... however, when I got home I found my aquariums had not been cleaned. they basically only fed the fish. Needless to say they did not get paid.

They claim both of my fish were alive when they last saw them... So I don't know. They obviously didn't take care of the aquarium so I don't think they'd have noticed if it died or not...

I'm assuming that may have something to do with it as well. I did a total clean down though when I got home. Cleaned the decorations, vaccumed the gravel, so on.
OP 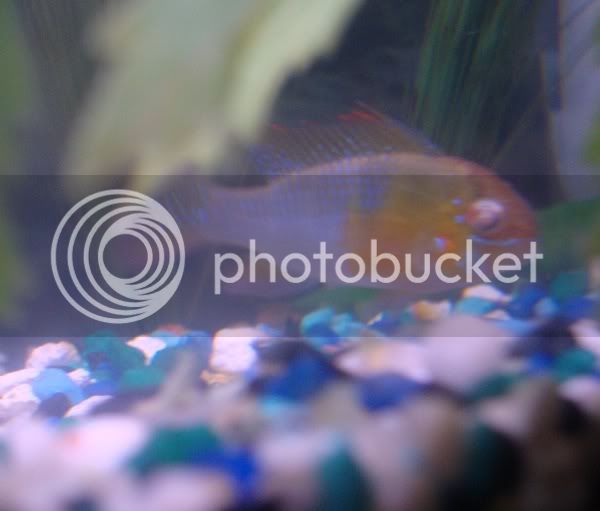 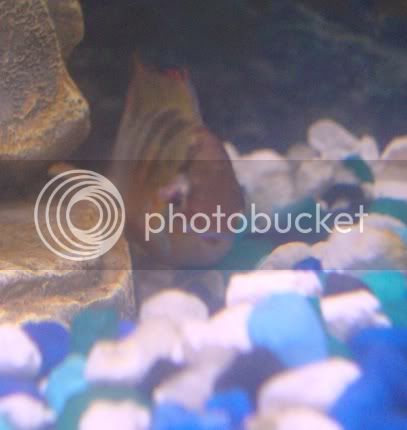 So I'm wondering if it could be fish TB...

I know how you feel, I'm a bit concerned I have it in my tank. I think it's the ultimate thing you worry about when you aren't sure what it is. I didn't think pop-eye was a symptom of fish TB though (could be wrong) so it probably isn't what yours have. I think it's quite rare too isn't it?

Have you added any new chemicals recently?

Sorry I can't help more than that. I know it's frustrating when you're worried about your fish and no-one answers you. Hope you get to the bottom of it soon.

I take my hat off to anyone who keeps GBRs successfully because I know how difficult they can be. At the time I kept them I was quite inexperienced so ended up losing them all eventually and decided they were hard work so gave up on keeping them. Now I'm a bit wiser I quite fancy giving them another try at some future point in time.

Anyway, your little GBR has probably developed this pop eye due to the stress of 1) having it's routine changed with you being on holiday, probably not being fed the same amount at the same times of the day as it's used to; 2) not having the regular cleaning regime etc 3) if it's lost it's mate it's probably been lonely. Cichlids are like that - they mate and stick to that fish and if their mate dies they can really be affected by the loss; and 4) the dead fish (if it's dead!) possibly causing a minor ammonia spike if the carcass began rotting.

A lot of possibilities for the cause of its stress!

If you begin treatment immediately with an anti-bacterial med you should notice its eye going back to normal over the next few days. The longer it's left the more stress he will be in and the lower his immune system will get.

I once had a sailfin molly that developed a really huge popeye very suddenly - it looked like a huge blister, twice the size of that on your GBR - I treated it with Melafix at the time and within days she was back to normal!

Btw what do you feed your GBR?

As for the carcass of the missing fish - no doubt it will have been broken down and absorbed into the filter. Other fish may have picked at it's flesh and then any remaining bits end up decomposing and getting sucked into the filter. Let's hope it's hiding somewhere though!

Twinklecaz: According to what I've read "Popped eyes" or eyes falling out 'CAN' be a symptom of TB... from what I read, it is uncommon, but not rare.

I've searched everywhere but I can't find any evidence that my other fish is alive which depresses me to no end. She was a very beautiful fish. Everything was so perfect while I was caring for the tank myself... I left detailed instructions which my supposed friends didn't follow at all. So now I'm worried about my upcoming trip. Luckily this one is only for four days. I may clean the tank before I leave and use a 5 day feeder. I'm not a fan of vacation feeders, but I don't trust having someone take care of the tank for me anymore.

I just wanted to make sure it wasn't fish TB in case I needed to take extra precautions than I already do. My first instinct was pop eye though, until I started reading about fish TB and found out that it could be a symptom of that too... but there isn't any body deformities or scale loss... and he is still eating so there isn't a loss of appetite. as for being lethargic and hiding more... well that's nothing new from the day I got him, so I wouldn't be able to tell. They always hid in or behind the cichild cave as I've said before... so its not out of the ordinary...

So I didn't know. its so frustrating when you trust someone to help you out... and when you can't seem to make your fish better.

I have Maracyn plus right now. The bottle said it works well for fish suffering pop eye. I added the second dose yesterday. The last dose will be tomorrow. Then I wait a few days, do a water change... then re-dose if needed. I just don't know. I was mostly worried about it being fish TB.
OP

well the ram seems to be doing ok... today was the last day for meds... but now I think my 2 year old betta has TB.

Last night he was fine. He looked great, he was swimming, he ate his bloodworms...

today when I turned on his tank light, he was sitting at the bottom of the tank... I knocked on the tank and he startled a bit and I could tell his body was twisted... he was shaped like an S.

So I'm assuming a 'S' shaped body is a sign of TB? Cause thats what I've seen on the internet.

So now I'm not sure what to do. I have 5 japanese trapdoor snails in that tank. I can't replace them into one of my other tanks cause they'd spread the disease to my other tanks... do I just euthanise them when I tear the tank down?

just an update... the pop eye seems to be getting better. It's not as swollen and the weird film covering it is starting to slowly shrink. I can actually see corners of his eye now. Sadly, I'm out of Mayacin... I ordered some online because the store didn't carry it... but hopefully it will come in soon and I can do another round of treatment since it seemed to help.

Its just so frustrating... I leave town, put the tanks in the hands of someone I thought I could trust, and I come home with TWO separate tanks with TWO different fish sick. (though I think the Betta may have gotten sick from the recent water change... the city water is obviously different from my well water and maybe the change sent him into shock. Fingers crossed he seems to be improving by small bits.)

A
Are these neon tetras mating??