So while in the process of cycling my tank - as I somewhat documented in a separate thread - I left my apt with the bare tank, only treated saltwater, & with heater, filter, & air pump running, for three weeks while I was out for holidays so the filter could cycle and the beneficial bacteria / nitrogen cycle flourish.

I came back to about half the water evaporated and dried up salt crystal all over the tank - inside & outside - as well as the table, floor, and my printer next to it.
here's a video assessing the salt damage

So, evaporation is my best guess - all though streams of salt crystal on the sides seem suspicious... Either way, from my experience with freshwater tanks before I'm not surprised the water evaporated, and I was naive not to cover the top of the tank before I left... I was rushing to get it running before I left and I bought the glass tank itself second hand without a cover, so I just left it open.

to correct this issue and move forward, I'm guessing I need to get a cover for the tank? the top rim at least has an inset plastic rim where a glass cover can lie, or I could get a hood cover with a tank light. because I'll need a light anyways. I'm guessing my best shot is to get both of those, anyways. Considering I bought the tank 2nd hand and don't know manufacturer or model no., I should probably get a custom-cut panel of glass, and try my best to get a hood that fits the top rim or just get a overhanging light? Where (which store perhaps - in the U.S.) could I get a custom-cut panel of glass - affordably?

The salt comes from air bubbles that pop and leave a tiny amount of salt and other minerals on the glass. The more aeration you have, the more bubbles and the more salt that gets everywhere.

Coverglass make a huge difference to reducing evaporation and minimising salt build up. You can get coverglass from any glass company (places that sell windows), or petshops. Most pet shops can buy in glass to whatever size you need.

When you buy coverglass, get 4, 5 or 6mm thick glass so it is less likely to crack and chip. Thinner glass (3mm) regularly chips and is not worth using. You will pay a bit more for the thicker glass but it is worth it. 4 or 5mm thick glass is the most commonly used on small tanks.

Get the glass in several pieces so it is easier to handle and put on the tank. Have a section or corner cut off and get a handle attached to it so you can lift it up and feed the fish, then put it back down.

Make sure the glass edges have been sanded to remove any sharp edges.

Wash the glass well with warm soapy water before use to remove any oil on it from the cutting process. Use a perfume free soap and do not use a disinfectant or anti-bacterial soap.

Keeping the coverglass clean and free of salt will also reduce the chance of salt creeping into the light unit.

I do not ever recommend covering your tank. You really need air/gas exchange into the water which is why good surface turbulence is advised.

This is what I really think happened....

Yes, over time your water evaporates. In my 90 gallon I would lose at least a half gallon a day!
As this happens, things like power heads and return pump water lines splash water because the water line is so low, therefore splashing up over the edges of the tank. This is not just salt creep. I had my 90 gallon for three years and never had anything quite this substantial happen.

My biggest issue with glass over a tank is, that glass will acquire salt build up from evaporation, it will also have condensed water dripping back into the tank, you will have to repeatedly remove it to clean, it then gets scratches and the water that pools on top/under effects the lighting into the tank.

The only excuse I would have for any kind of cover would be if I had something like a firefish that wanted to jump out.

There are ATO (auto top off) systems that can help rectify this issue, they are costly, or you just keep RO water on hand and refill the tank every couple days.

Alright. Problem has been solved.

SaltNoob, Thanks for the input - I will keep an eye out for the aeriation of tank. I do think I will opt in for the convenience of covering the tank however, as this will be my first saltwater tank and I hope to optimize the ease of maintenance and procedure for the tank. I'm also fairly busy with other responsibilities and hope not to risk becoming inattentive to the fish once I put them in the tank. I do have an air pump / diffuser stone.

Here are some pics of the cover I got. I had to make it myself from a sheet of plexiglass from home depot - I reached out to a bunch of local (and one online) glass cutting businesses, but the replies were lousy and the one quote I got (for glass) was $150, at which point I might as well by a whole new tank lol. So went with this solution. for the most part it worked out. 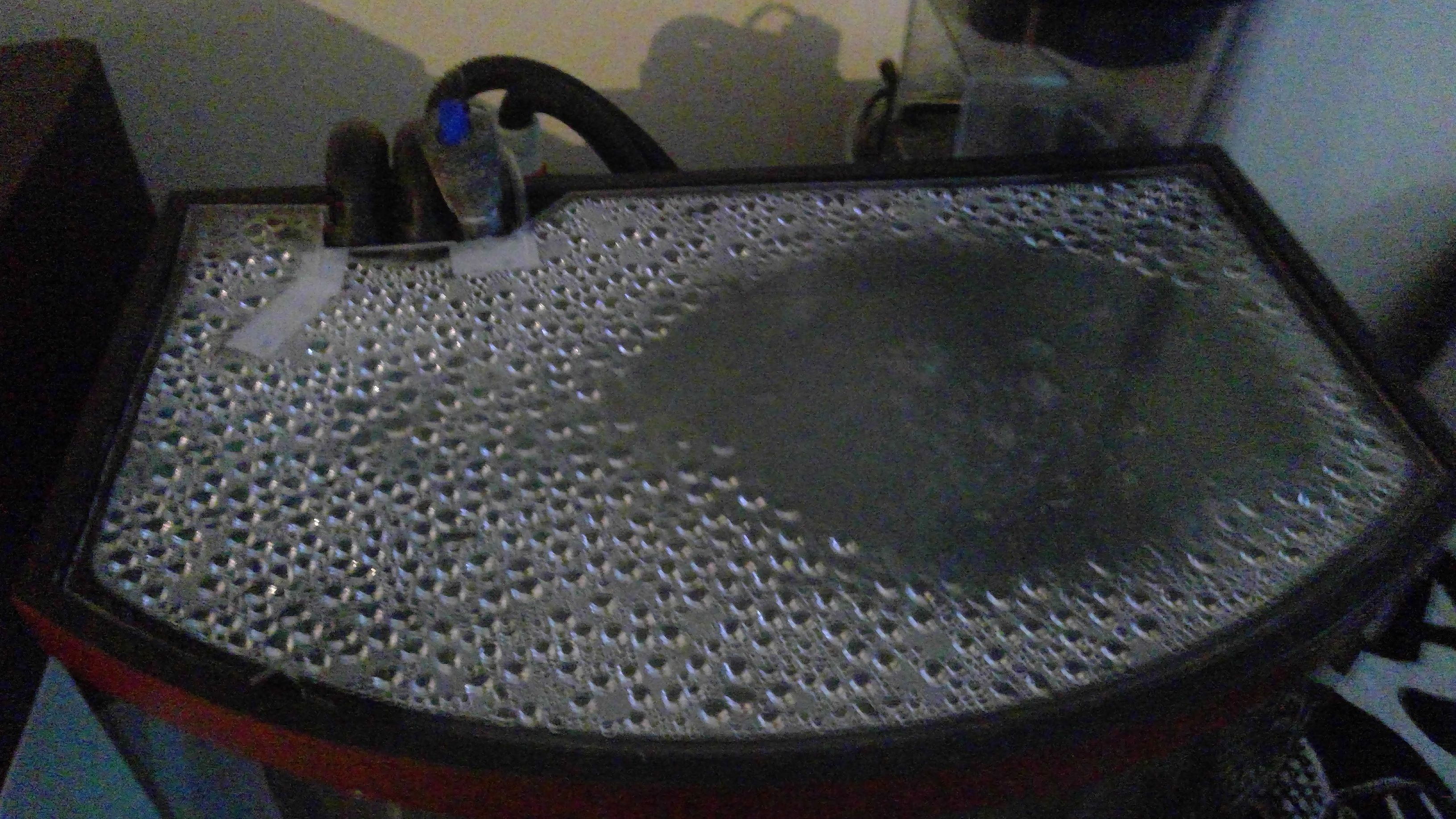 only issue was when making a cutout from the back edge of the cover, for the filter intake/outtake and heater, the sheet cracked a bit, as seen where I covered it with tape. I googled how to repair it and online saw that I can fill it with silicate or use a soldering iron to melt the cracks shut. I'm more inclined to the second solution, even though the end result will be more visually unappealing it seems to me a more complete solution. any thoughts or experience with this anyone?

I do not ever recommend covering your tank. You really need air/gas exchange into the water which is why good surface turbulence is advised.
Click to expand...

Unless the tank lid is extremely sealed up, open top vs open bits here and there won't affect the gas exchange and its associated water parameters (like pH). You'd have to really make an effort in sealing it up for that to be an issue. The small gaps one can normally expect to have around power cords and such are plenty. In many ways it's really no different from a human being in a small room with the door closed for a long time or in a car, etc. - the small gaps are enough we don't have trouble with gas exchange between inside and outside. The main issue for gas exchange with the water is surface agitation, which is a matter of power heads and other equipment rather than the tank lid.

I've used lids on many marine tanks. The main drawback I experienced was heat buildup before I switched over to only using LEDs. T4 fixtures produce a lot of heat and can significantly raise the temperature in a smaller system when they are near the lid (the lid itself will feel hot directly under the light). So, if you are using T4 fixture with more than 2 tubes, keep a sharp eye on the tank temperature with the lid on if the room temperature is also warm.

get another piece of Perspex and glue it over the cracks to patch them and stop it splitting more.

If lids were truly air tight then fish would suffocate from lack of oxygen. I have never seen a lid designed to be air tight.
You must log in or register to reply here.
Share:
Facebook Reddit Pinterest Tumblr WhatsApp Email Link