Hi there, this time I"m doing my neighbour's betta tank that needs a serious do-over. Before today, my neighbours had bought a betta along with a 3 gal(I think), some turquoise substrate, and a glass tube with a cactus decoration, and the filter for the main tank. Now, when my neighbours first showed us the tank, I was but still a fish noob, and knew not of the perils of keeping a betta in a blank tank. Later, they went away, and it died. As we were still unknowledgeable, we just bought a veitail betta for 9.99. Turns out the daughter of the neighbours was taking the fish out every now and then to "play" in the glass tube. Now, even thought I was a noob, I knew this was bad, so I then told them they should put the cactus thing into the main tank, and retire the glass tube. Fast forward to today, and I've decided to snip off some ludwigias from my tank and collect driftwood and rocks. I then proceeded to take out the cactus, and place the rocks in. At this point he's stressed and hiding behind the filter, so I found the light and put it on, then walked away. Normally I would just leave it like this, and maybe add more ludwigias. However, I like my terrariums/tanks looking nice, so I'm wondering what the best way to replace the substrate is without completely disrupting the cycle. Also, she's paying me $10 a day for a week for this, so I can afford a few plants and maybe a few otos or shrimp(probably steal babies from my tank

I know right? Well, the best thing I can do is make its life better. I'm going to try to get it some tank mates, such as shrimp. I might even be able to donate guppy fry and maybe the cardinal tetra(probably not it might die of loneliness

). If anything I"m going to put some java moss in there, and if I can buy some more plants I'mgoing to snip some leaves off to plant them. The most drastic thing to do is completely change the gravel, as aquamarine really bothers me.

Tank mates shrimps in 3 gal ? Frankly speaking, no.
Betta does much better alone.
You should set his "tank" in this way (for example) : 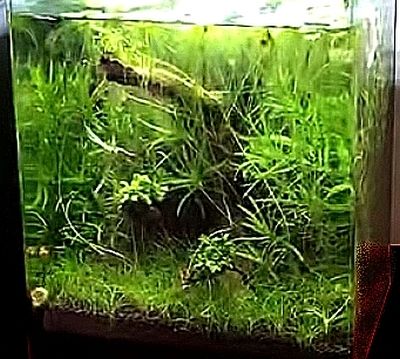 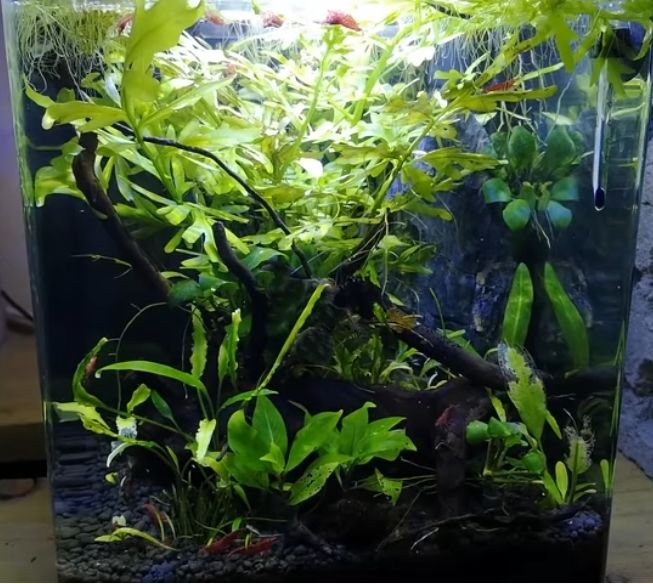 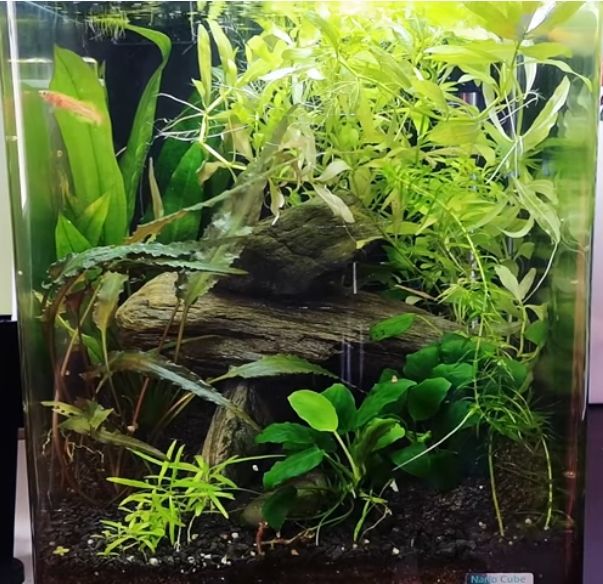 With the tank being so small I'd highly recommend removing the stones and drift wood. It's bulky and taking up valuable swimming space.

You can provide shelter with plants, both floating and planted. I'd suggest plants that are softer, such as limnophila sessiliflora or cabomba aquatica to name just two. They will provide cover but allow the fish to swim through them undamaged.

Floating plants are a good option for cover although in a tank of that size I could only really suggest something with smaller roots such as salvinia, red root floaters or riccia fluitans.
OP
OP

Alright, I'll use my pay check for when she pays me to upgrade the tank, and buy some plants. I can see if I can convince her to get a bigger tank, but that might be a bad idea because (a) it's her house and her money her rules (b) She's actually not that good with pets. She once had 2 cats but one ran away and probably was killed by racoons, while the other one practically rules the neighbourhood and is extremely street smart, and has been out for weeks at a time without showing up.
OP
OP

Did water change, he was a bit stressed, but I had to take him out temporarily while I took out 90% of the water due to the last WC being a while ago.

Here he is now 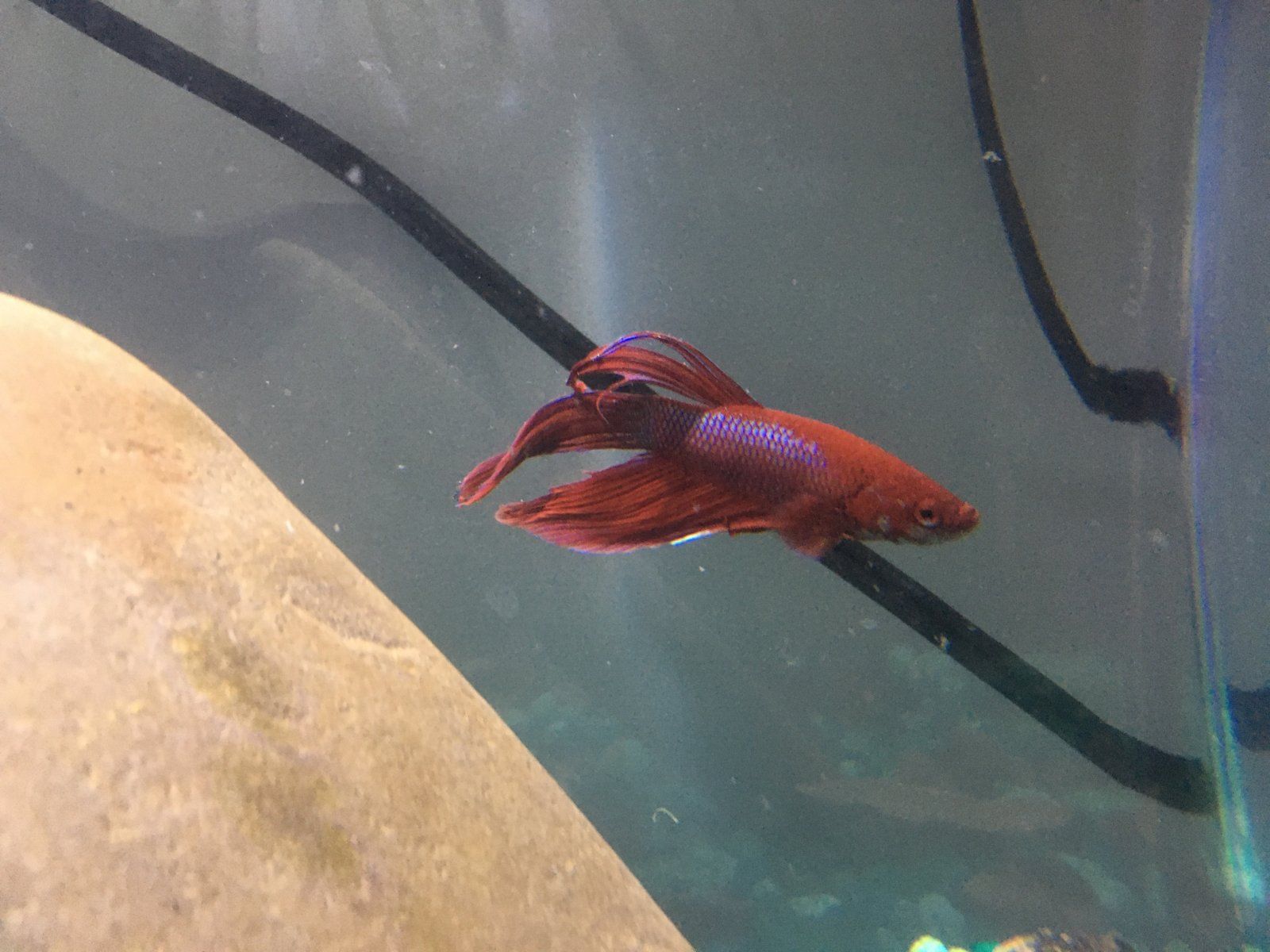 He's been hiding under the rocks, and sometimes in the filter, so that's a good sign.
OP
OP

Fed him the leftover bloodworms from my main tank, and he seemed happy. Also, I think I saw plant growth, and this is good due to the nature of the substrate being purely decorative.

Wait... Does this mean I can feed him dead crickets or dying spiders? My brother has jars upon jars of spiders, and whenever they die I want to use them for something.

Look at his mouth : way to small to swallow anything bigger than mosquito larva

Tacocat said:
Wait... Does this mean I can feed him dead crickets or dying spiders? My brother has jars upon jars of spiders, and whenever they die I want to use them for something.
Click to expand...

Nope.
You must log in or register to reply here.

Where to get melenistic mosquito fish?