My dedication Thread to my wonderful Bonds

My most treasured possession..my kitty Bonds...was killed by my neighbors dogs.

It's both her, my, and their fault.

Her fault for being a sneaky kitty and sneaking outside.

My fault for not letting her climb trees (mainly because she couldn't get back down, and I couldn't get up there to get her down, so I taught her she wasn't suposed to do it...of course I didn't think she'd ever sneak outside either though).

My neighbor's fault for letting their dogs roam outside a fence as a pack. (yes, these are the same dogs I posted a thread on before..about one getting into my fence with my Smiley pup).


It's just terrible what they did to her...they murdered her. I will never forget this...and probably never get over it either. But since she meant so much, and there is a place where I can post picture to remember her and share her with everyone..I decided to do this. It's taken me a while to even be able to look at her pictures...this happened about 2 months ago.

I got Bonds as a baby...a baby baby. We figure she wasn't even 6 weeks yet..as her little teeth were just barely there. Her and her sister (Louise or Lu-lu for short) were found under the hood of a car that was taken to my neighbors work and left (at a mechanic's shop) and they heard them meowing pitifully. No ones knows where they came from or where or if there were more . My neighbor's were going to keep her and Lu-lu but Bonds (her name was actaully Thelma to start with...Yuck huh?) kept sneaking out and following me home. After about a month of having to retrieve her on a nightly basis (after I would leave for the evening) they finally asked me if I just wanted to keep her. I said "of course!!" (cas I absolutely adored her...and the rest as they say...is history. We had alot of fun together and made some wonderful happy memories..ones I'll never forget.

She had to be the best cat I've ever had or seen. Never got on the counters (even taught Smooch not to do it too) never tore anythign up.. never got into anything actually. Always sweet and tender never mean. Loved going to walks (since she wasn't allowed to be outside alone). Always there when I needed someone to hug. She walked on a leash, rode on my shoulder (at the pet store), and minded like a child..she would look at me...like she knew exactly what I was saying..and then she had this look..the look in her eyes ..it was pure love.

helping Smooch keep the babies together 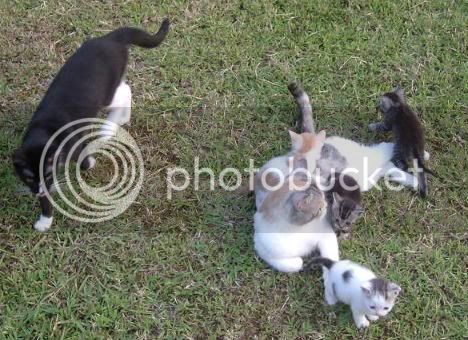 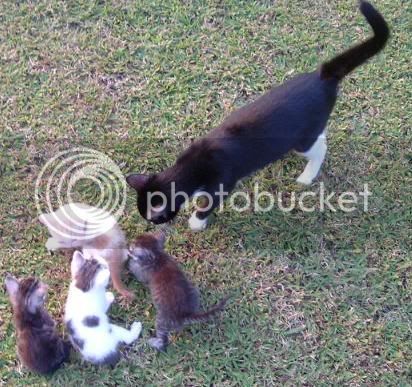 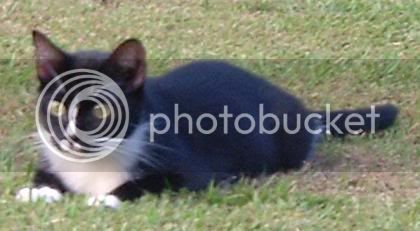 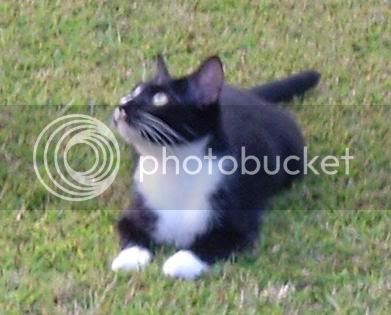 pretending to be a beached Killer whale (lol) 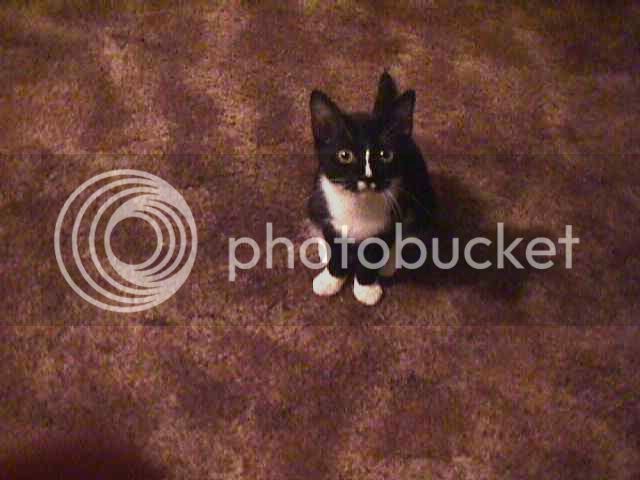 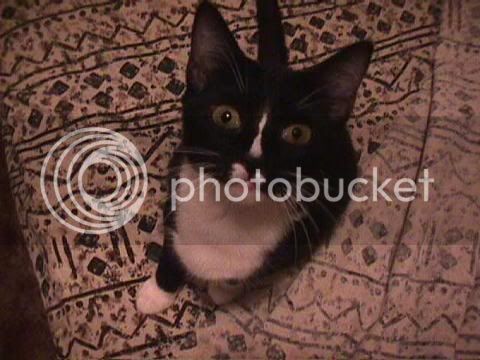 at the neighbors playing with Chester (the bobtail)..she stayed there during the day, while I was at work, so she wasn't lonely until I got Smooch..kinda a "kitty" daycare.."hey" the dogs and kids have it..why not kitties 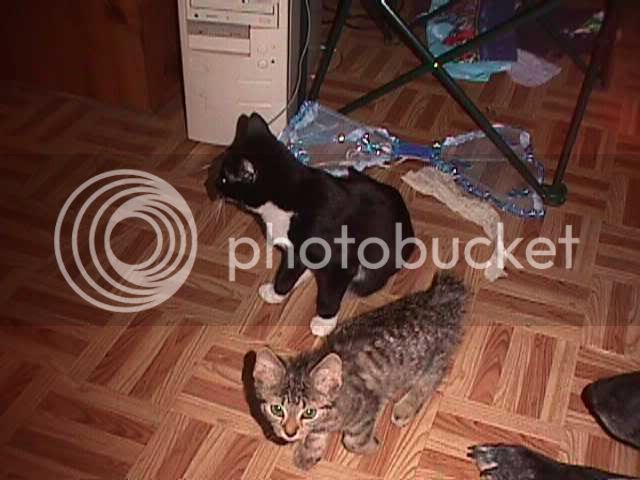 making sure I wasn't hurting the baby 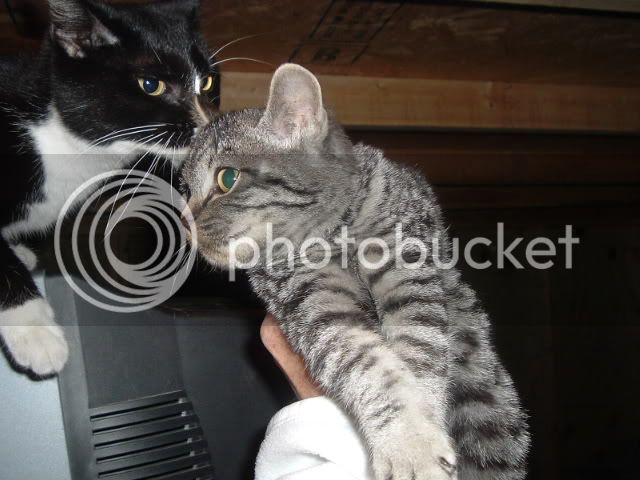 playing in the woods during a walk

pal'in around with her best buddy Smooch

looking rather frumpy after a nice roll in the gravel

lovin on her best buddy Smooch

If I'd known I was going to loose her so soon..I woudl have taken more pictures.

So so sorry for your loss SRC

I know how truly truly awful it is.

It's only been 2 and a half months since my very own (avatar) Sushi was hit and killed by a car....
OP
S

One of the kittens in the top pictures (he was almost a year old though..would have been July 15th) actually did that about 2 weeks ago. 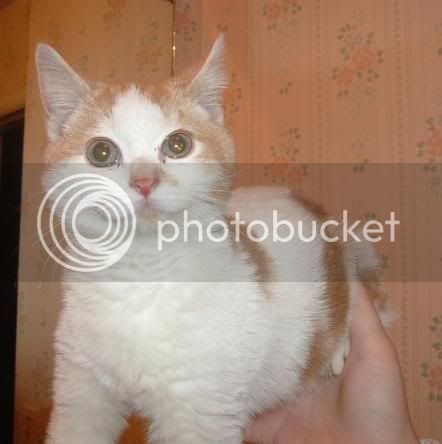 His name was Baby..cas he was a big ole snuggle baby.

He bolted out the front door while we were bringing in groceries..and before I could catch him...he was gone.

I thought the poor little guy (was about 16) that hit him was going to have a heart attack. I had to call his parents to come get him...I felt so bad for him. (felt pretty bad for me too)

Your Sushi was so pretty and looked to be a sweetie (has a very kind face and eyes)....such a tragic loss...sorry for your loss too Bloozoo

i feel so sorry for you its awful when a loved pet s snatched away.did the dogs owners say anything to you?

Sorry for your losses

That is gut wrenching

Yeah..it really sucked. I buried them beside each other though. They were very good friends, I thought it fitting.

I had decided to keep Baby too. I have (or had) 3 other kittens that I was trying to find homes for.

I decided to keep the runtly tabby instead now...A lady came and picked the other 2 girls up Saturday.
H

Oh I am so sorry! She appeared to live a great life
A

What a sad sad story. It bought tears to my eyes.

I lost a corgi many years ago now due to the stupid actions of a neighbour. She had visited our house and "forgot" to shut the side gate (we weren't home at the time). Then she went for a walk to the shops, which she had to cross a highway to get to (like a major highway, 3 lanes each way etc.).....and the dog followed her...all the way to the highway. And followed her across but didn't make it across

I still get tears in my eyes when I think about it that way. We thought he (Toby) had gone misssing, and even asked the neighbours. The lady who "did it" even said she didn't know where he might be.

She later admitted that the dog had followed her etc.

It would have been easy for her to take the dog, put it back in the yard and shut the gate....but no!! She knew it was following her the whole way and never once did anything to stop it or even try to get it back home.

Your cats are (I say are and not were because they still are beautiful, even in death, I am sure) beautiful SRC

. It brings tears to my eyes as well...everytime I look at the pictures I took the day she died (I took pictures of her in their yard before I removed her). But I can't help but look at them...I don't know why I do it though

I hate to hear stories of other people's neglect in causing damage to another person's property...especially when it concerns a pet.

And no, the owners did not say anything to me. I have not even confronted them..honestly I'm afraid of what I might say, or do. I did however call animal control who told me they coulnd't do anything becasue we have no leash law where I live. They suggested I call the police, which I did. I actually called the county patrol and spoke with someone, who was unexpectidly very sympathetic (must have been a pet owner as well). They also told me due to the no leash law that they couldn't really do anything.

I had a letter all typed up ready to send, per the suggestion of the office, but when I drove by to get their address...what I had in the letter had already been done. They put up a brand new fence! I called the animal control officer back and he told me that he "threatened" them with coming out and picking up their dogs IF they did not put them in a fence..since a "formal" complaint had been registered with both them and the country patrol office.

Hopefully this does not happen to anyone else after this. But atleast their dogs are safe...and won't get run over now....or kill anyone elses cat or puppy.

Aw man, y'all are breaking me heart. My poor kitty Abu (his picture is on my website BTW, go to my profile to get there) was an INDOOR kitty only! Sadly, my parents let him out when I was on a date and he got munched by two neighbors' dogs that would run free and pack. The emergency vet said it was dire and he, at least, would never walk again. But by a miracle he survived that, spending a week in the hospital and with nothing but a funny walk. I moved out and was living with a woman and her two daughters and again he was an INDOOR only cat! One of them let him out and a coyote got him. I cried so hard. Only two weeks after that my dog died of kidney disease (she is also on my website "Family Pets" page).

So sorry for all your losses.
H

oh people what are you trying to do to me here! sorry to everyone whos loved and lost on here. i will be so sad when my cats pass on. dusty inparticular as she was alive when my mum was so we have a special connection

hugs to all!
E

I am so sorry for your losses. You gave them a good home, lots of love, and full bellys, what more could they ask for? I know their up in heaven smiling down on you. And yes, cats can smile!
OP
S

They sure can..just look at that grin

B
Please help me with plants! 😂

Today at 6:54 AM
Obsessed with fish