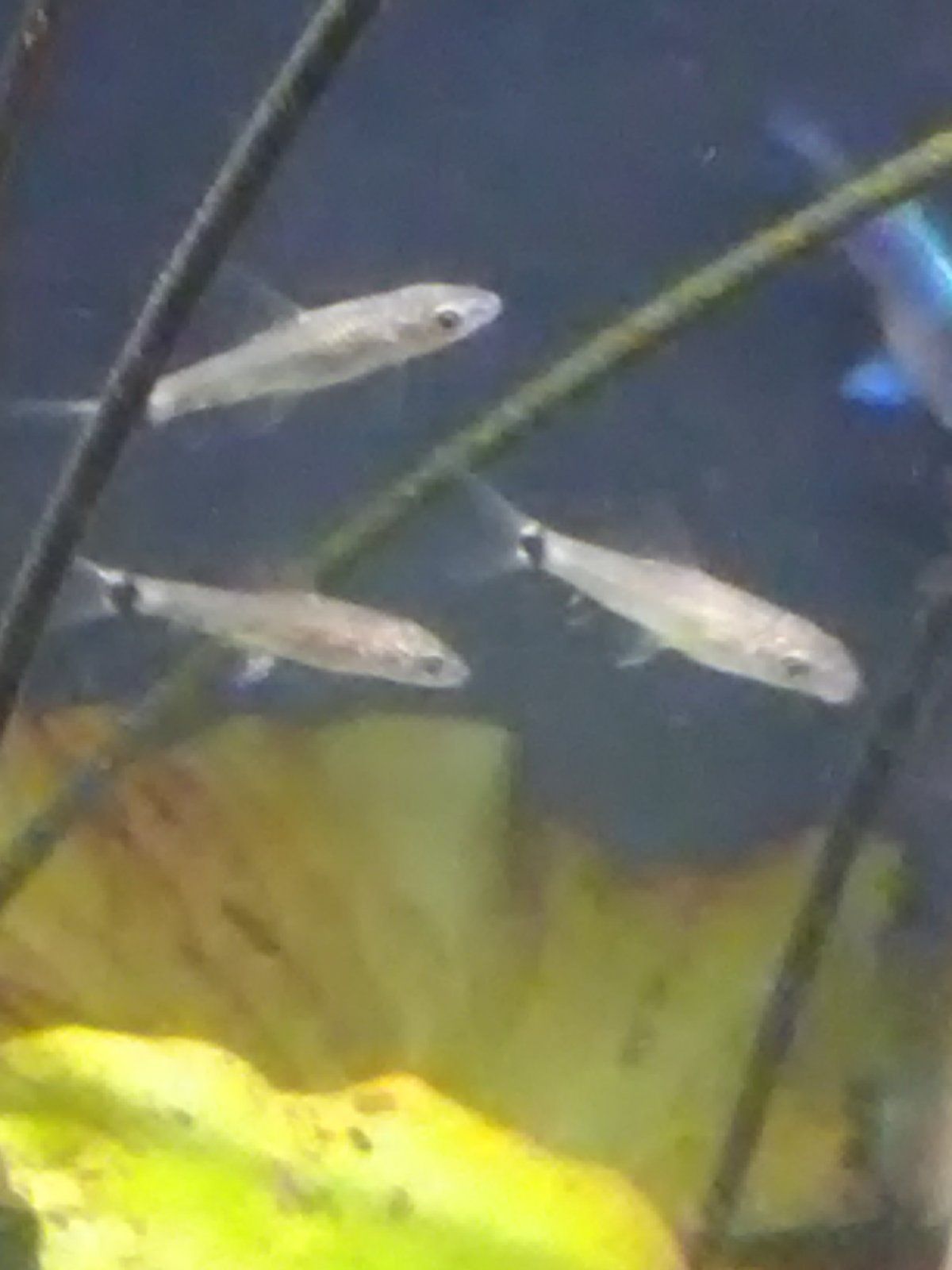 Hi all. These three guys got sent to me by accident about three weeks ago. They were about an inch long. I took a look, quickly categorized them as scissortail rasboras and put them in the 5-gallon tank. But as they grew I became unsure of that diagnosis. For one thing, they don't have the bands on each branch of the tailfin but rather one black spot right at the fork. For another, though they appear silver, when they turn toward the aquarium light they are bright gold. They also exhibit a light orange centerline from head to tail under certain lighting. Also they've already grown to 1.5-2 inches. Finally, though they don't turn down regular meals, they spend about 85 percent of their waking time nibbling algae from rocks, driftwood and plants, I mean they're on the go almost constantly. The rest of their time is spent attacking, chasing and playing with one another. They pay virtually no attention to their tank mates.

Anyway they're peaceful as could be and healthy so I moved them to the community tank. What say ye folks? Are these just plain old scissortails and am I overreacting to one spot vs. two bands? 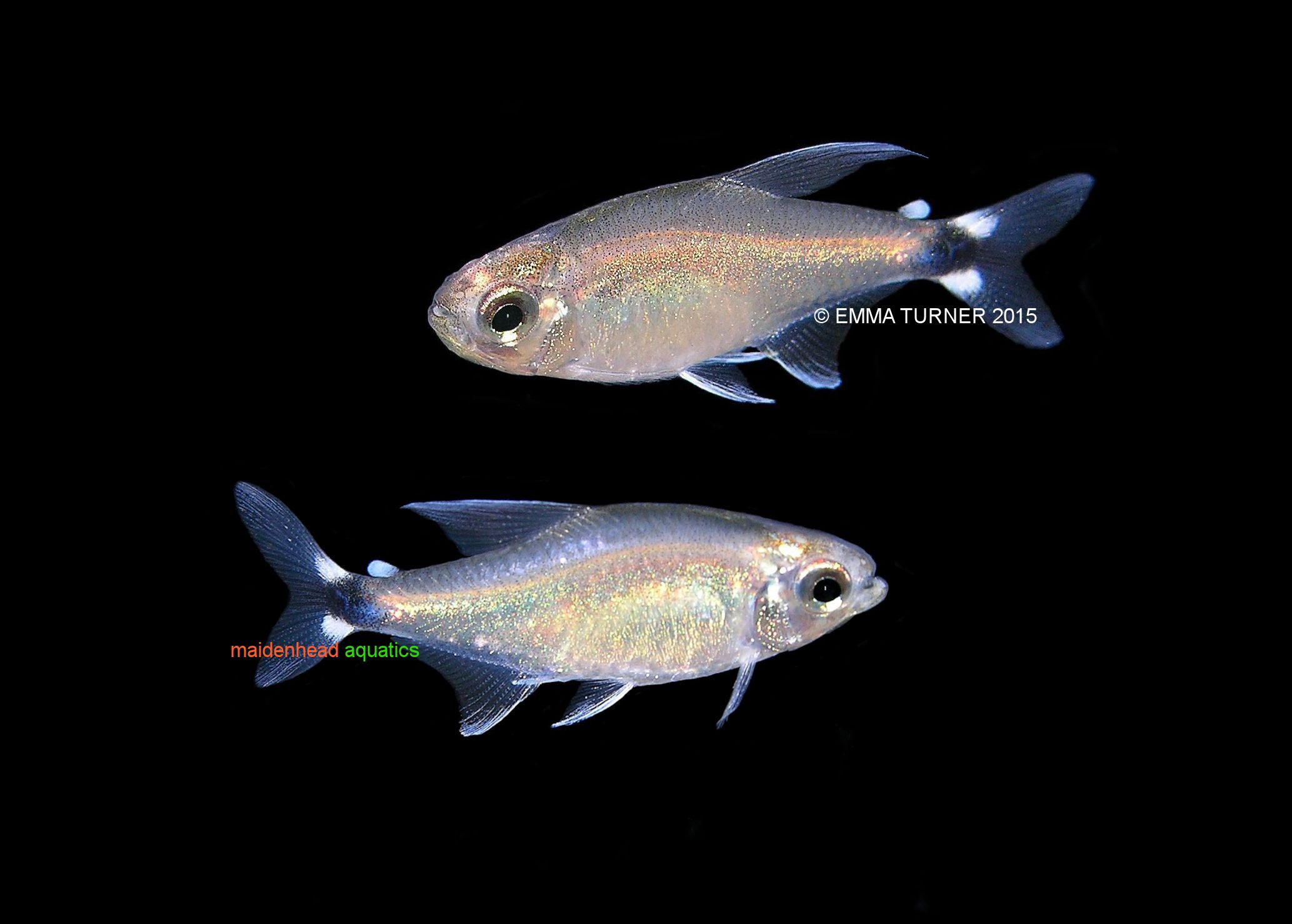 I can't tell from the photo - do the fish have an adipose fin? That's a tiny fin on the top just in front of the tail. tetras have adipose fins but other types of fish don't.

I agree they def look like algae eaters of some kind.

The mouth looks wrong for a tetra

I wasn't sure they were tetras (that's why mentioned the adipose fin) it was just that I'd seen fish with that tail spot in a local shop and they were reed tetras. Though hastatus cories also have the same tail spot but these are not cories 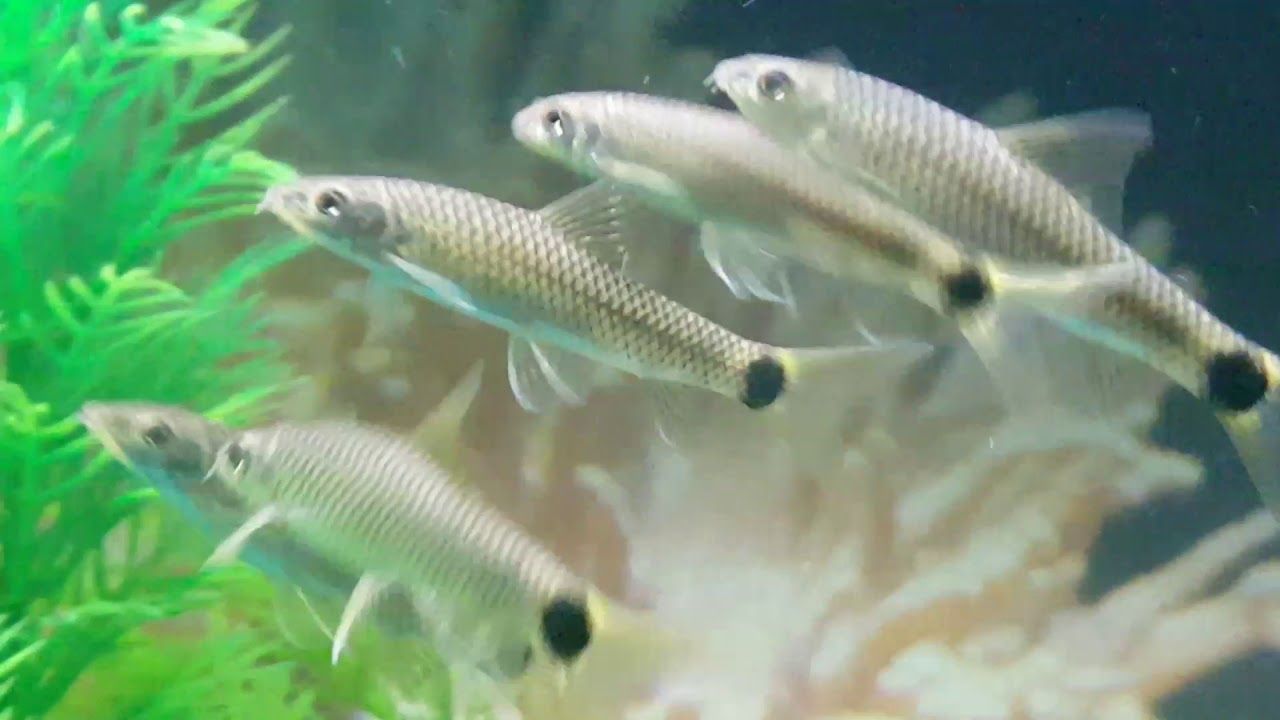 What are those?
OP
P

Yes they look very much like these. DId they give a name for these?
Click to expand...

AKA Silver Flying Fox AKA Reticulated Siamese Algae Eater. Captain Barnicle nailed it straight off. I also found a photo of one displaying his golden hue, pretty much confirming it.

I want to thank everyone for your help. With the photos and the descriptions I found on the web it is clear that you have led me to the answer. Thanks again.
OP
P

PS: I also learned they grow to six inches long, which means they'll be moving to my 29-gallon tank when I set it up. They're fine in the 20 for now, but will outgrow it shortly.

Paulie B. said:
PS: I also learned they grow to six inches long, which means they'll be moving to my 29-gallon tank when I set it up. They're fine in the 20 for now, but will outgrow it shortly.
Click to expand...

And they can be nasty little buggers towards other fish.
You must log in or register to reply here.

Christmas Trees. It is Christmas where is your tree