Male honey gourami is looking pale in color and is hanging on the bottom of the tank, sometimes almost laying on his side. He is a very social fish and normally will come up to the glass when I approach, he still does this and then returns to the bottom after a little while. These symptoms started 4 days ago and on the first day I hardly noticed he was acting weird but he got progressively worse, spending more and more time on the bottom, listing more and more to his side. On the third day he starting swimming really funny almost like he was having buoyancy issues, like he was sinking like a stone by his tail. I moved him to a shallow container filled with tank water and floated it in the tank, over the day he got better and I released him yesterday and he was acting a lot more normal. Today he started sitting on the bottom again.

He is honestly kind of a drama queen and I thought he was just pouting because his tank mates were picking on him but it got to the point that I could tell he was on his way out. Since re-releasing him to the tank, I have noticed the female honey gourami chasing him pretty ferociously (way more than their normal playful interactions), but she never nipped his fins or anything. He hasn’t really had an appetite for a few days, and I fasted him completely for the day he was in his little container because I thought it might be a swim bladder issue. But he perked up in like that one day so I don’t really know what is going on at all. I am not seeing anything abnormal on his body or fins except that his coloring is pale. Today he isn’t sinking or having trouble swimming but he seems weak and lethargic. I put a divider in the tank today to keep the female away from him to see if that helps. Could all these problems really be from stress from the female?? I think she may have been wanting to spawn because she looked FAT and when she swam up to him she like would flare out her fins and kinda tilt her body to the side. But he doesn't have a bubble nest right now.

Volume and Frequency of water changes: maybe 30-40% every two weeks but I did an extra one when he started acting weird

Chemical Additives or Media in your tank:
I condition water with seachem prime, and I use plain filter floss in my HOB filter. there are easy root tabs from aquarium co-op under the substrate but they have been there for months. I also dose with easy green from aquarium co-op also but I haven't done that in months because I am *cough*lazy*cough*

Tank inhabitants:
Cheerio, male honey gourami (I have had him about 1.5 years. Bought him 2mo after setting the tank up
Leche, female honey gourami (she’s been in the tank for maybe 7 months)
The two honeys have never spawned although cheerio has made several bubble nests)

1 nerite snail, been there a long time, i honestly don't remember when I added him

One sparkling gourami, maybe 5 or 6 months old. He is the sole surviving offspring of a pair of sparklings that had been in the tank with cheerio (BIG rookie mistake, I know I know) and I was waiting until he was a little bigger to move him but when cheerio started acting weird I moved the little guy in with his parents.

Also the tank is pretty well planted with a couple Amazon swords, a tall bunch of red and green ludwigia, some plant I grew from a bulb in a variety pack from Petco that I have (still) not been able to properly identify, and a never ending HOARD of duckweed (another rookie mistake). All of that has been in there for a year or more.

Recent additions to your tank (living or decoration):
Nothing since the addition of Leche.

Exposure to chemicals:
Should be none

Thanks y'all. I love the little guy and I want to do right by him.

Any pictures and video of all the fish?
What does the fish's poop look like?
Is the fish eating well, or only half heartedly picking at things?
Are you sure the other honey gourami isn't a male too?
Any floating plants in the tank?
OP
E

The sick fish’s poop was white/clear for a few days but it was green/brown today as he was eating a bit yesterday. Today he is half heartedly picking at things. He comes to the surface but doesn’t really eat. And no, I don’t guess I am for sure that that other isn’t a male haha. Cheerio (the sick one) is yellower while Leche (the presumed female) is grey with yellow just on the fins. Cheerio usually has a lot more orange in him and does develop the dark throat thing from time to time. As for floating plants, there is duckweed all around and some of the leaves from that bulb plant come to the surface and sit almost like lily pads.
also the pics make the presumed male look smaller than the presumed female but they’re really about the same size, maybe the grey one is even a little smaller.

A better pic of the one I think is female. That white dot is on the glass not the fish btw

White/ clear poop is an internal problem, usually bacteria or protozoan. If it is no longer white, then hopefully the problem is getting better.

The yellow edge on the dorsal fin is normally found on males. You could have 2 males and the dominant one is bullying the weaker one, and it developed an upset intestine.

Keep feeding the sick one and get it to eat as much as possible and maybe look into separating them for a bit to see if it helps.

In the post #3, the first photo shows a male next to the mesh. Is this the same fish in the photo in post #4?

The first fish in post #3 shows the typical black throat of a natural coloured male honey gourami. Natural coloured females are plain silvery beige and don't have any yellow on the dorsal fin.

The yellow gourami in post #3 is harder to tell. One way is to look at the tail end of the fin under the body. With a male, the end comes back on itself to join the body; with a female it doesn't. This is a terrible drawing to show what I mean 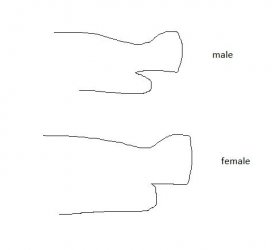 The photo in post #4 shows a male's fin but I can't see the fin of the yellow fish clearly in the photo.
OP
E

Okay I will try keeping them separate for a bit and see if my yellow guy appetite improves.
The fish in post 3 next to the mesh is the same one as in post 4. The yellow one definitely has the same tail shape as the male drawing. I didn’t realize the males could have the grey/silver coloring.
If they are both males and the whole issue right now is that one is bullying the other, what should I do next? I know they can be kept in larger groups to cut down on aggression but my tank is too small for that with how territorial they are I think. There was a lot of debate in what I was reading about whether even just one could go in a 10g. Should I just keep them separate until I can upgrade the tank? Would other tank mates like some ember or neon tetras help break up the aggression at all? Bio-load wise the tank could handle that I think but I don’t know if would help or hurt. Or maybe it wouldn’t do anything.
thanks for your help!

If the yellow one has the same fin shape as my awful drawing, both the yellow and the tan one are males. Neither look grey/silver in the photos, but you can see them both.

Stressed natural coloured males do look pale, but the fish in the photo with the mesh shows two male characteristics - the black throat and the yellow edge to the dorsal fin. Females never have these, they are plain grey often with a darker stripe from mouth to tail.

With the yellow variant, females sometimes have a broken dark line running from mouth to tail, but yours doesn't have this.

Other fish will not affect the gouramis if both are male. They know they are both male and the one which has decided he is the dominant fish will attack the other both physically and chemically with aggression pheromones.
Without the gouramis, a 10 gallon would be OK for ember tetras, but as you'd need ~10 tetras, the tank would overcrowded.
Neon tetras need a bigger tank than 10 gallons.
OP
E

Okay thanks. I’ll keep them separate until I can get them a bigger tank I guess. I appreciate the advice.
You must log in or register to reply here.