Care: Easy, beginner level. The ghost shrimp is possibly the easiest shrimp in the hobby to care for. They are simple creatures and require simple care. Housing is 1 gallon per shrimp, that means that one can live in a 1 gallon tank comfortably. They are quick to stake their claim on fallen bits of food, and will not give it up to another shrimp, but will gladly relinquish their find in the presence of a fish the size of an adult guppy. They are said to steal food from the mouths of fish, but I've never observed it. They tend to be social creatures and like to be in groups, but this isn't required like it is with schooling fish. They can be kept singularly but they will become somewhat shy. This will last for a little while, but not forever. They can be housed with peaceful, community fish. They can even be housed with African Dwarf Frogs, as they are one of the few bottom feeders that will not take the food of the frog. They will leave the frog or fish to eat its food and wait for them to finish before they go in and eat. They would rather eat scraps than risk injury at the hands (or fins) of a stronger animal. They prefer the same temperatures as most tropical fish, 70 - 80F. They can tolerate the temperatures of glodfish, but they will become sluggish and inactive. Generally not as fun as usual. 50F and below are fatal.

Feeding: They can and will eat anything. I have tested this, and have came up with conclusive results. I dropped a shrimp pellet into the tank, and it was subsequently devoured by the lone shrimp in the aquarium. They will also eat hikari algae wafers, betta food, flakes, HBH frog and tadpole bites, sun dried gammarus, frozen or dried bloodworms, blackworms, daphnia, and catfish bait!
(Don't try that in a community, in fact, I removed the shrimp to a plastic sandbox pail to test that. And if you're wondering, Casper 2 is OK)

Additional Information:
> If the shrimp is housed in a community, do not use copper based treatments for any fish disease, because copper is toxic to invertebrates.
> If the shrimp is lying motionless on the bottom of the tank, it has either molted (shed its old exoskeleton in order to grow) or sleeping. If the shrimp has died, it will turn pink. The reason for the color change is that these shrimp have a large amount of carotene in their blood, and when they die, their blood settles. The carotene difuses from the blood and disperses throughout the body. This is why they turn pink when they die.
> If they turn white, they are molting, and need to be left alone. If they are disturbed during this process, they will become overstressed, the molting process will not go properly, and they will die.
> Unlike their bigger shrimp relatives, or their bigger lobster cousins, they are not backswimmers. In fact, they are quite accomplished swimmers, and are even capable of hovering in the water for quite a long time. Up to five minutes in fact.
> They are completely clear, so you can watch their food digest. The only pigment they posess is in two places, their eyes, and the yellow spot on their tail.
S

The_Dude said:
They are said to steal food from the mouths of fish, but I've never observed it.
Click to expand...

I had dwarf puffers for quite some time before, and the ghost shrimp I had in there with them had enough guts to take bloodworms from the dwarf puffers mouths.

To add to the part about their feeding habits, I think it is worth adding that they make GREAT scavengers for any tank. I dropped some into my planted 5 gallon and they ate all of the blue green algae, hair algae, and anything in between that was covering my plants overnight!

I'd like to note that several species are sold as ghost shrimp, and P. paludosus is the most common one. Sometimes Macrobrachium shrimp juveniles are sold as them, and this may be why people have reported that they may attack fish or other shrimp.

Here is a picture of one of my P. paludosus girls.

The_Dude said:
They are said to steal food from the mouths of fish, but I've never observed it.
Click to expand...

I have an 3 inch big electric blue crayfish- when he was chomping on a algeawafer, I had two of the shrimps, dive in from the top to snatch bits and pieces right out of his chompers!

Here are a few out of my mass population of ghost shrimp. 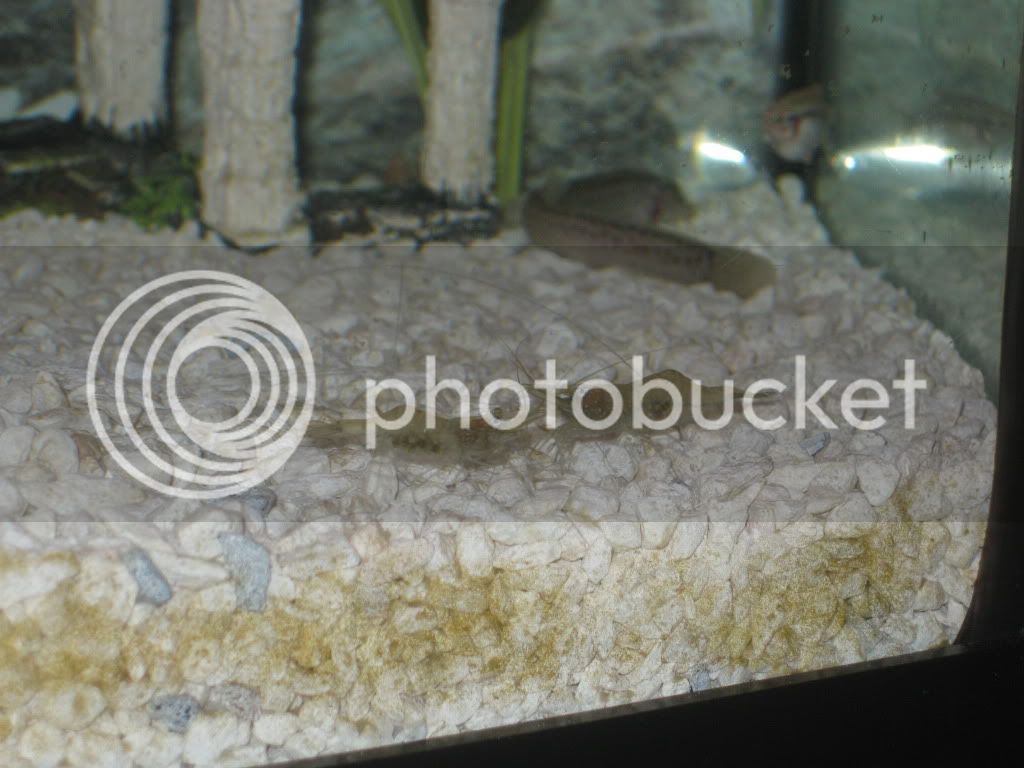 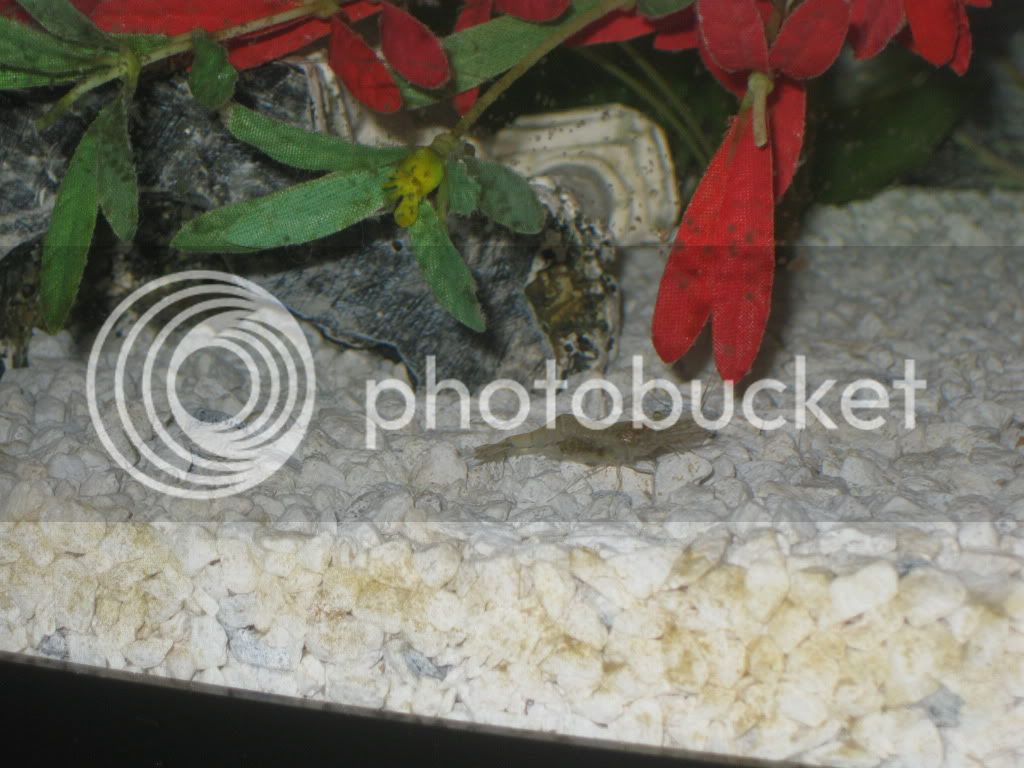 Could someone please tell me how to sex them? The only thing I've seen so far is that the females have a red saddle, but I haven't seen this and really don't know what it means. I'd like to try to breed mine but don't know how to proceed. Thanks for any help.
M

Look for red bands around their two from 'claws. Those will be the males. Also females get considerably bigger. I have a 2inch female and the males are nowhere near her size

TylerFerretLord said:
I'd like to note that several species are sold as ghost shrimp, and P. paludosus is the most common one. Sometimes Macrobrachium shrimp juveniles are sold as them, and this may be why people have reported that they may attack fish or other shrimp.

Here is a picture of one of my P. paludosus girls.

I'm thinking I was sold a Macrobrachium and I think it has eaten an African dwarf frog, 5 neon tetras and several xray tetras. Not a happy camper. This is my shrimp. Just before this picture was taken he was lunging at some of my xrays. 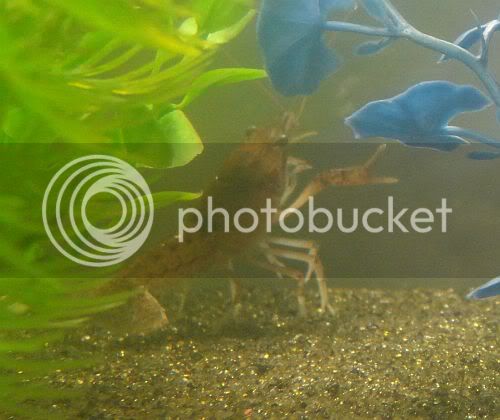