I have a couple of tanks that have been aquascaped, ie plenty of wood in them along with many plants. Both were properly cycled and even had filters taken from existing tanks, along with some of the substrate.
However I'm getting damned annoyed that I'm getting constant low but worrying nitrate/nitrite indications. Also from time to time if I don't do a major water change for a couple of days, I also get ammonia level concerns.
I've been doing around a 60% water change nearly every day, and even a couple of times a day in the earlier days just after commissioning the tanks.
I ain't overstocked. I don't overfeed and in fact most of the feed is live whiteworm or daphnia with frozen bloodworm and mosquito larvae. It's only now and then that I use flake stuff and that's only added in a small amount. I have, for instance in the tank that's streaming live at present, 14 (was 10 until last week) green tetra, a pair of Badis Badis, and 4 otos.
Oh, and a single Santa Maria Endler.
The tank holds around 45 litres given that a lot of volume is taken awy by the hardscape. For filtration I have lately added another sponge filter that again was already in use in another tank, and have a Oase in tank filter.
I'm wondering if the wood is the problem here. Perhaps a breakdown of the wood is causing issues as it can't be anything to do with the fish or overfeeding. Would slow decay of fresh wood produce this effect or what?
I'm thinking og getting another larger canister filter to use instead of the ones in this tank as the increased area of biolical build up would be better I guess. That said, my other tank that's also having similar but not quite as bad problems has a large canister filter. Scratching my head here a bit

I have just thought too.....
Both of the mentioned tanks have a lot of biofilm in them, primarily on the wood but also on some plants. Yet other tanks that have not had wood introduced into them are generally free of biofilm and even algae. The lights haven't been particularly strong even though they have been left on for a good number of hours and the room is also lit by sunlight though not direct. So, no algae, no biofilm and no wood? Does this add up?
Last edited: May 9, 2022

I checked the thread to see what 'niggles' were.

I'm not a water tester and would just go ahead and not worry, but I know that's frowned upon and I'll step aside so those with test kits can pick it up.

You either have problems with the filter or something in the tank/s is releasing the ammonia.

What sort of filter do you have?
How often and how do you clean the filter?

Check the tap water for ammonia, nitrite and nitrate.

Test the items in the tank for ammonia. Put each item in a container of water. Make sure the water is free of ammonia before adding the item. Leave the item in the water for a week and check the ammonia levels during that week.
If the water has ammonia, then the item in that container is a problem.

Nitrate test kits read nitrite as nitrate. If you have a nitrite reading, the nitrate test kit will give you a nitrate reading even if there is 0 nitrate in the water.
OP
OP

Colin_T said:
You either have problems with the filter or something in the tank/s is releasing the ammonia.

What sort of filter do you have?
How often and how do you clean the filter?

Check the tap water for ammonia, nitrite and nitrate.

Test the items in the tank for ammonia. Put each item in a container of water. Make sure the water is free of ammonia before adding the item. Leave the item in the water for a week and check the ammonia levels during that week.
If the water has ammonia, then the item in that container is a problem.

Nitrate test kits read nitrite as nitrate. If you have a nitrite reading, the nitrate test kit will give you a nitrate reading even if there is 0 nitrate in the water.
Click to expand...

I have a sponge filter which was taken out of an existing tank. This was put in this tank after the filter I bought for the tank resulted in increased toxin build up even after fully cycling the tank. It's an Oase in-tank filter BioCmpact 50. This was put into the tank when I first started the tank up and I had a very large sponge filter in with it, fully cycled/biologically complete.
I'm afraid there's no way I can take bits and pieces of the hardscape out and check them. It's like asking a contractor to take off bridge abutments to check the tensile strength of the metal rods in it. It's all integral with plants and sunk into soil media.

Now, I just did another water change yesterday and the ammonia is OK, but the nitrite/nitrate is showing slight pink already.
As this is a soft water tank I've been filling with a mix of store bottled water, rainwater and tap water suitably treated.
The tap water has a hardness of 420ppm, the rainwater has none, and the store water is at 110mg per litre.
I juggle these figures around until I get a level of around 180ppm and an obviously reduced ph as a result of the addition of rainwater primarily. The net result is entirely satisfactory for the fish in the tank.

Now, having had no rain for the last week or so, I'm now out of rainwater so have been to Asda for more 5 ltr bottles of GB$ water.
I looked at the label and I can see things that sort of make me wince or wonder. For instance there's supposedly a nitrate level of 20mg per litre. It also shows Chloride (not chlorine or chloromine. I don't know what Choride does though. Is it acceptable in tank water?
If the Nitrate is likely to add to my woes, or indeed even largely be responsible for them I'll need to stop using bottled water. 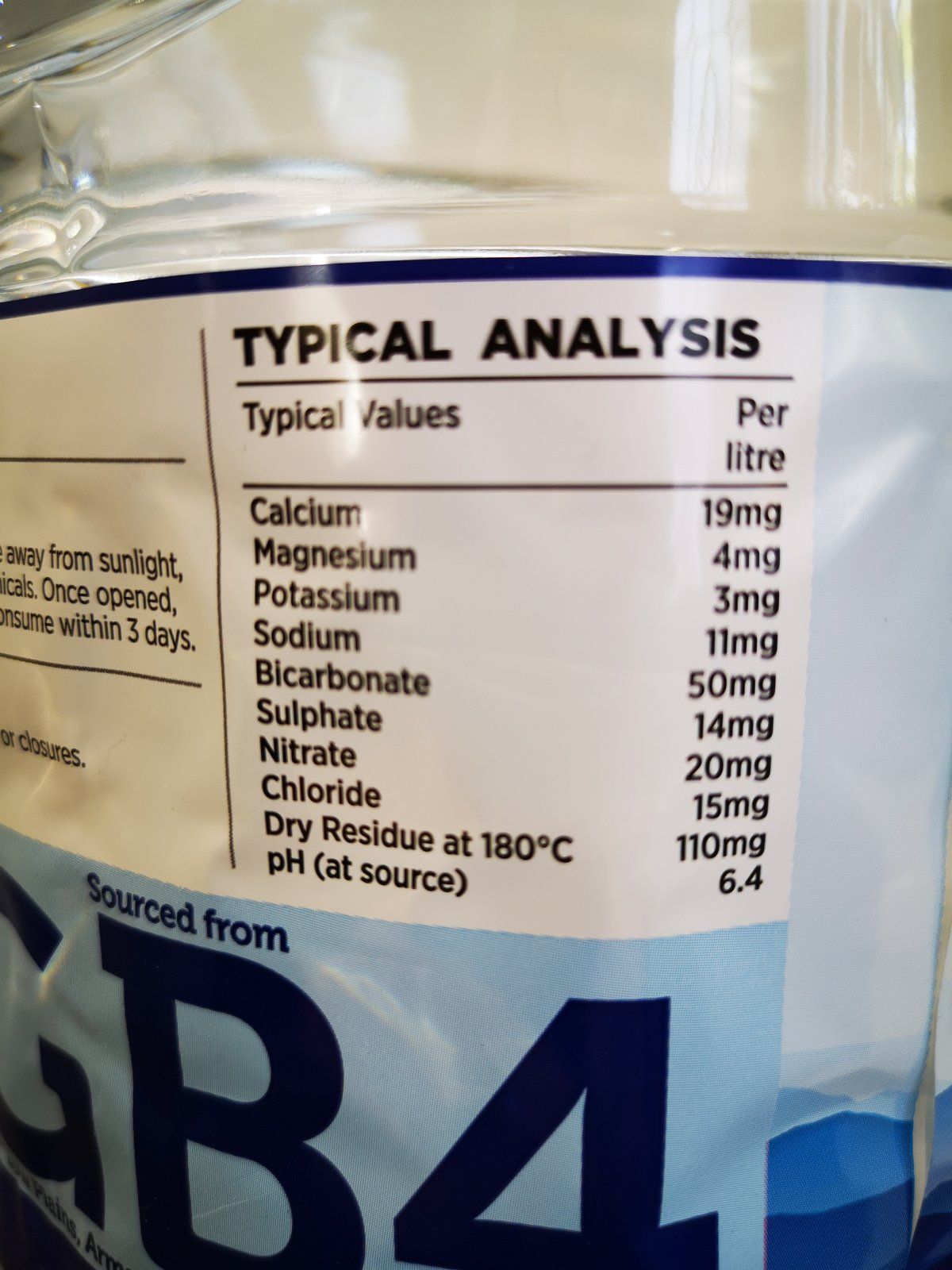 I have it sorted now - I HOPE.
I have been doing a shuffle around of all the tank electrical connections, airline inputs to both sponge filters and air bubble thingies.
I had 3 spare air outputs on the pump so I joined them all together with Y junctions to give an increased flow into a single line. This increased the air flow through the sponge filter in the tank, as well as the aeriation to this and other tanks. That was done yesterday afternoon. I did a water check then and I had nil ammonia but 0.5 nitrite and 5 nitrate. I didn't change the water just so I could see if the sponge filter would work better.
Well it sure did. I'm now free of all nitrite, nitrate and ammonia levels.
I'm not a lover of the sponge filter in the tank though, and the other Oase one obviously isn't up to the job so I have another external one coming tomorrow. I'll need to leave the others where they are for now though until the new external gets a good biological load in it.
OP
OP

Another water check today and the results have never been better. The new external filter won't have made a chemical change yet though so it must be the incresed flow of air through the sponge filter that's done the job.
That said, although I never thought the water was anything other than perfectly clear, as in not stained etc, the clarity of it is massively improved to the extent that when I look at the tank it immediately makes me hugely happy.
You must log in or register to reply here.