Origin: Ohio, found in most large lakes and streams, all Great Lakes except Superior and also grown on fish farms.

Care: The channel catfish is a peacful community cat that can grow very big if put in a large pond. They will get along with just about every other fish and they will not bother smaller fish. They are bottom and middle water swimmers, however they will come up to the surface during feeding times and, when big, they are like vacuums eating food..


Feeding: Channel catfish will eat any kind of Koi floating pellets. These are good to feed them if you want them to come to the top. They will also feed on submersible plants and algae especially string algae

Breeding: again not sure because I had three of them and they have never bred and a buddy of mine had two which also never bred. In the wild they breed in mostly rivers and streams in spring with warmer temps. The male guard the fry.

Sexing: Check the bottom of them. Males also become very dark during spawning season and develop a thickened pad on their head

Comments: They are really fun fish to have and they can clean up the bottom of a pond really well. If you can catch them be careful of their hook-like feelers on the sides of there mouth. Another point to put in there would be they can handle cold water (freezing over the top cold) as long as a hole is left open for the gases to escape. Also during the spring they tend to turn white somewhat but the color goes back after about a month.

huntnikk said:
Care: The channel catfish is a peacful community cat that can grow very big if put in a large pond. They will get along with just about every other fish and they will not bother smaller fish.
Click to expand...

I have to disagree with not bothering small fish because i seen channel cats snack on some big feeder fish.

I'd also agree with this argument; these fish are ravenous feeders! To keep them with fish such as minnows that they'd consider prey in the wild would be most unwise. They aren't "scavengers" in any meaningful sense, and basic care should be similar to that of any other large predatory catfish.

I kept my specimen in a 200 gallon system alongside a Florida gar and a variety of Central American cichlids down to species as small as convicts. I'd not trust them with anything smaller, or less deep bodied, than these. In a tropical aquarium with hard, alkaline water and plenty of water circulation they seem to do very well. My specimen enjoyed Hikari Cichlid Gold pellets and trout farming pellets, alongside all sorts of wet frozen foods and chunks of seafood such as squid and mackerel. Like other large catfish, it's important not to overfeed them, and they are somewhat prone to regurgitating food if they eat too much at once. This particular aquarium used a big trickle filter, and I'd certainly recommend the use of heavyweight filtration systems if channel cats are kept indoors.

huntnikk said:
Care: The channel catfish is a peacful community cat that can grow very big if put in a large pond. They will get along with just about every other fish and they will not bother smaller fish.
Click to expand...

I have to disagree with not bothering small fish because i seen channel cats snack on some big feeder fish.
Click to expand...

also they get much larger than 28 inches...ive seen them 40+

and they arent just from ohio..they live in just about every state

Wasn't going to but too many things left unsaid.

First off, its the barbs on the edge of their fins that can hurt, even kill you. Not its wiskers or anything near its mouth. The edges of its fins are covered in razor shap "nubs" on a spiny barb that ends in a very sharp point. Thats not the worst part. Any cut or puncture will get infected by the slime coat on these barbs. Extreme care MUST be used when handling even small fish. I have scars on both hands from these fish, from cuts that hurt for days, and never heal right. Unless you want to lose some skin NEVER put you fingers in their mouths either, as their bite pressure is tremendous and they have large plates covered with small teeth. Yeah, those noodling guys do it, but those guys are kinda nuts to begin with.

Second, these fish are known for their never ending appitite for other fish. Possible if you raise one from a hatchling and its never tasted another fish you can get away with it. But I would not chance it with anything you care about. 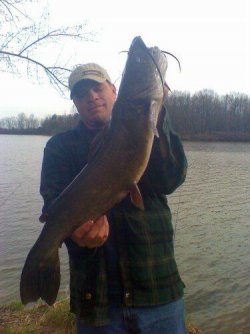 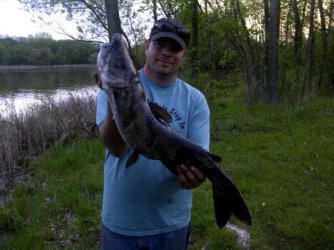 Yes they get alot bigger then 28" Both of those fish where released unharmed BTW. I catch ALOT of them and my favorite lures are always something that looks like a BIG fish. Bluegills are a favorite food and those have a wide body with lots of spines, so that does not deter them either.

Me, personally, would never, ever, never, try to put one in a tank.

1 minute ago
The Dog
T