Overhere some photos of the butterfly splitfins. These are one of my favorites when it comes to goodeids. They're also the most sold goodeid species on this globe.

A bit of info keeping ameca splendens
Scientific name Ameca splendens
Common name butterfly Goodeid Family Goodeid
Origin mexico rio teuchitlan
Size males up to 3” females 4”Care Ameca splendens are best kept in a large aquarium with plenty of open swimming space and with good filtration They are very active fish they can get a little bit aggressive towards each other but very rarely come to any harm. these fish will nip the fins of slow moving fish such as long finned guppies. So are best kept with fish of a similar size or with fast moving fish such as barbs. They can quit happily live and breed on a good quality flake food. However it is best to feed them some live food in there diet they can tolerate a wide temperature range and can withstand temperatures of 78f, when kept at high temperatures long term it may shorten there lifespan. I find they do best when kept in a species only tank with a temperature between 64f – 74f In the winter I give them a cooling off period by dropping tank temperature down to 64f this helps them to stop breeding and it gives the females a chance to build up there strength so that they can produce good strong fry in the spring. my tap water is quite hard with a ph of 7.6 which suits them fine. I feed a variety of live foods and do 40% weekly water changes.
in the wild this species will graze on algae and microscopic food which live on the algae. In the home aquarium they can be fed Boiled Lettuce, or Spinach, and Peas, Will eat all live foods, Mosquito larvae, Daphnia blood worm Tubifex, white worms, First fry foods crushed flake food, baby brine Shrimps, micro worms, and grindal worms,Frozen blood worms and Daphnia are very good When live foods are not available. This is a easy fish to breed. to encourage them It’s best to raise the tank temperature above. 70f and to feed them some live foods. There tank should contain some plants for the fry to take cover. They are large at birth and are born with a large trophotaenia still attached to them usually drop of within the first few hours brood size Normally Around 20 but can have as many as 40 fry. Females that produce large broods can some times result in smaller and weak babies. when fed well on live food they will soon recover. when the Adult fish kept are well feed they usually leave there babies alone.

Comments
Ameca splendens was the first Goodeid imported to the uk since it’s introduction back in the early seventies it as become very popular amongst fish keepers from around the world. Most stocks of Ameca splendens are descended from the original collection of Rio Teuchitian. For many years this species has declined in number the reasons for this are pollution and the introduction of predatory fish such as tilapia and catfish.

Well fed or not, but overhere no fry are eaten. And I haven't heard differently from others, to be honest. There are many more goodeid species that will leave their fry alone. But some goodeid species do chase their fry such as Alloophorus robustus and Allodontichthys tamazulae.
I really had to be fast to scoop those fry out.

emeraldking said:
Well fed or not, but overhere no fry are eaten. And I haven't heard differently from others, to be honest. There are many more goodeid species that will leave their fry alone. But some goodeid species do chase their fry such as Alloophorus robustus and Allodontichthys tamazulae.
I really had to be fast to scoop those fry out.

fish48 said:
and I thought you kept your fish well fed LOL
Click to expand...

fish48 said:
Alloophorus robustus and Allodontichthys tamazulae you've really got to be there soon after they've given birth
Click to expand...

Well, of all goodeid species, the bulldog splitfin (Alloophorus robustus) is the worst of them all... I've seen them bite adult barbs and in half and some real killing of cichlids. They're real carnivores and prefer live food the most. It didn't take long before I put them in a species tank when I first got them. That's the best thing to do with these fish. The bulldog splitfin can reach about 15cm (approx. 6 inches) in size.

The bulldog splitfin are great looking fish i feed mine on prepared food pellets earthworms and muscles,
a long-lived species a lifespan of 10 years Plus 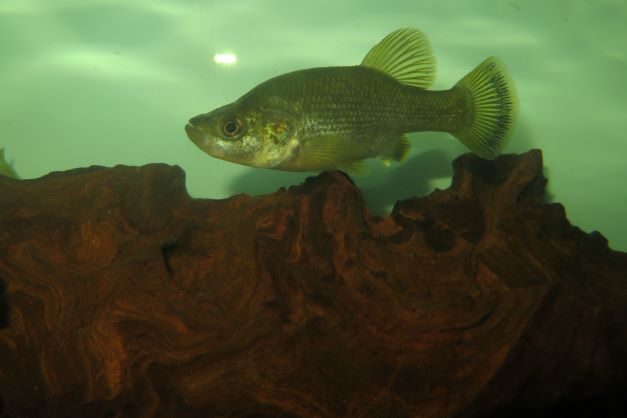 11 minutes ago
Alice B

8 minutes ago
Alice B

D
How to know the crayfish is dead

K
Has any one kept an electric blue jack dempsey with a rainbow shark fish?