Maximum size: About 3 inches in the wild, but rarely exceeds 2.5 inches in captivity.

Care: The bicolour pseudochromis is a hardy, small yet aggressive fish. The front portion is a magenta/pink colour and the back half is a yellow colour. A 30 gallon tank minimum is recommended. The fish's maximum size is approximately 2.5 inches in a home aquarium. Specific gravity is best around 1.022 and 1.024. Recommended pH levels can be between pH 8 to 8.5 and hardness of dKH 8-12. They do best in temperatures ranging from 72F-78F (22C-26C). Bicolourâ€™s do not get along well with all species of marine fish. They can be very territorial and defend there territories to fish more then twice their size. Recommended tank mates would be larger peaceful fish such as tangs, some clownfish, puffers and angels.

Feeding: The Bicolour pseudochromis will accept most marine foods. They have been know to eat bristleworms.

Sexing and Breeding: Not much is known on breeding however females tend to be slightly thinner then males. Dottybacks will lay eggs in a large mass in a cave or crevice and are guarded by the male till they hatch about 4 days later. Bicolours are not commonly tank bred.

Comments: Due to the bicolourâ€™s territorial aggression it is strongly advised to house only one per tank. Having it be one of the last fish added to the aquarium may also be beneficial.

Note: The Bicolour Pseudochromis should not be confused with a fish that looks similar to it â€“ The Royal Gramma Basslet (Gramma loreto). The differences with those two are small but noticeable. Royal Grammas purple/yellow half line fades from purple to yellow, whereas the bicolourâ€™s is a straight line. The gramma is a much more peaceful from the Atlantic, Bicolourâ€™s are somewhat aggressive and from the Pacific. There is also a differentiation in the fishâ€™s fin style and colour.

Mod Note: This fish should be avoided in a nano tank setup. They have been known to wreak havoc on other fish under these low volume conditions. 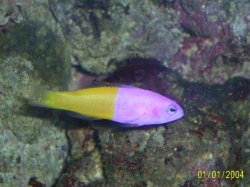