The Betta is a beautiful fish that exists in all manor of colour varients from whites and silvers through yellows and blues to reds and blacks. It's beautiful flowing fins and graceful movement make it a wonderful fish to own. It lives to be about 2-3 years.


Care:
Bettas originate in the shallow waters in Thailand (formerly called 'Siam', hence their name), Indonesia, Malaysia, Vietnam, and parts of China. They proliferate rice paddies, shallow ponds, and even slow moving streams. Because of their natural habbitats being fairly enclosued areas Betta keepers can often get away with using tanks as small as a gallon but it is advisable to keep them in at least 2 gallons to keep them happy and give them plenty of space to swim.
Being Tropical fish they love a humid climate and so having a heater in a betta tank is much more important than a filter, especially in a smaller tank were heat loss is quick.
Having the "Labyrinth" organ means that they can also breath air from the surface of the water as well as through their gills. The organ is a maze of folded skin that filters the air for oxygen, hence the name labyrinth.


Feeding:
Bettas will feed fine on dried foods and betta pellets as well as treats of frozen bloodworm or brine shrimp on occasion. They generally like more meaty foods and so will turn their nose up at most flakes.
Bettas also love live food and will happily eat live brine shrimp.

Sexing:
The general rule of sexing is that the Males have long flowing fins whilst the females have much shorter fins. However, watch out for Plakats and other short finned bettas as well as longer finned females

Breeding: The Betta is a bubblenest builder and the male will build his nest for the female to lay her eggs in. When they are ready to spawn, the pair will display intense coloration and begin circling each other under the bubblenest. The male will wrap himself around the female who has turned on her back. As she expels the eggs, they are fertilized and begin to sink. The male will scoop up the eggs and spit them into the nest. From this point on the male will tend the brood. It is advisable to remove the female, as the male may become aggressive towards her as he tends his young.

Just thought I'd add a bit about tankmates.

Mainly, it depends on your betta's temperment. One of my guys is usually fine, but gets protective over his bubblenest. The other is just not very friendly, to say the least. Try before you think about it- prehaps releasing into a prospective tank before making it permanent. Suitable tankmates are, to be honest, few, however you should be safe with...
Most bottomfeeders (although be wary of aggressive/ brightly coloured ones
Slow moving, non- nippy tetras
WCMM
African Dwarf Frogs (make sure they are dwarf!)
Shrimp (although one day the betta may fancy a snack...)

As with all tankmates, have a spare tank ready in case it doesn't work out.

STAY AWAY FROM-
Crabs
Guppies
Platies (in fact, most livebearers)
Nippy fish
Aggressive fish
Fry
Anything with long fins

The overall message is-
BE CAREFULL!

A note about sexing. This can be difficult, especially with plakats. There are several ways of telling, not all are good but a combo is a sure sign

1. Fins. As said above, males usually have longer fins, females shorter fins. But this isn't always the case
2. Colour. Females tend to be duller than males, often with coloured fins but drab bodies. But, again, you get brightly coloured females and drab males
3. Oviposter. Normally only females hsve one, but it has been known for males to have them. The oviposter looks like a white spot on the stomach between the ventrals, or near them. See? Also not always visible on white or light females. 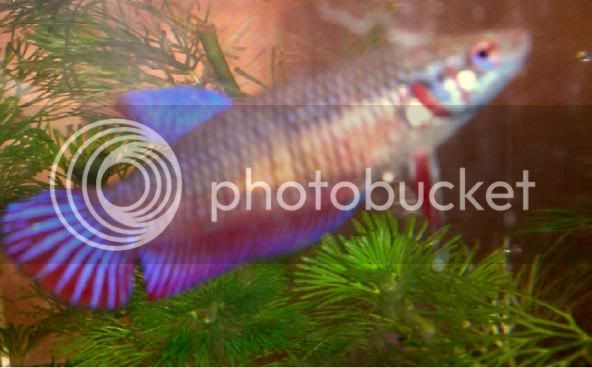 4. Body Shape. Often females are much broader than the males, especially if they're full of eggs. Males usually are slimmer.
5. The most reliable method. When a male (and sometimes a female) flares, you get flappy bits coming out. See the flappy bits? 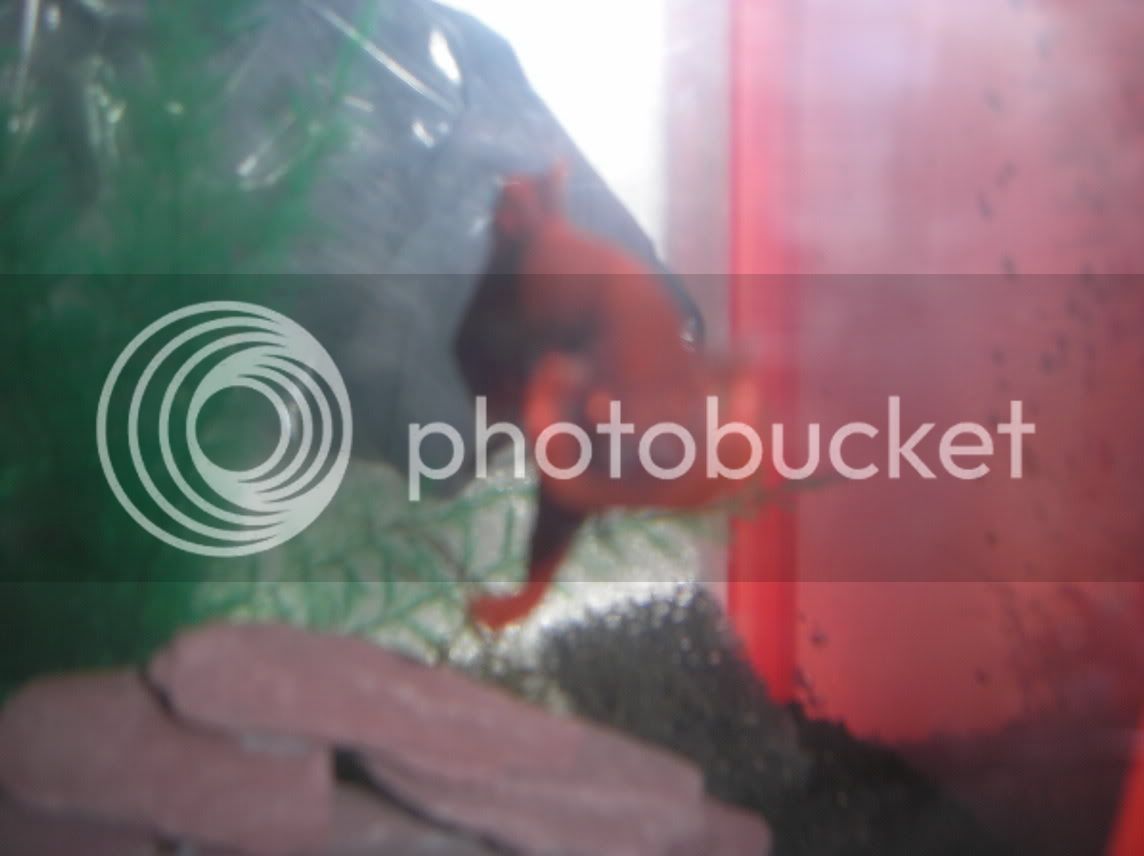 When not flaring, the flaps on males can be seen outside the gills, sometimes in a 'beard' under the chin. Females flappy bits stay inside the gills (unless they have a deformity, but not normally).

Obviosly this is all useful for males in females clothing at lfs's, seving babies and telling apart females and plakats.
C 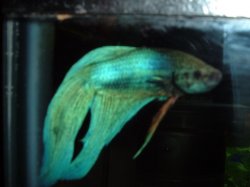 If you're a cory and you know it clap your.. hands

here's a pict with a nice bubble nest

bunjiweb said:
Sexing:
The general rule of sexing is that the Males have long flowing fins whilst the females have much shorter fins. However, watch out for Plakats and other short finned bettas as well as longer finned females

And females have an egg spot. Very important thing to tell them apart 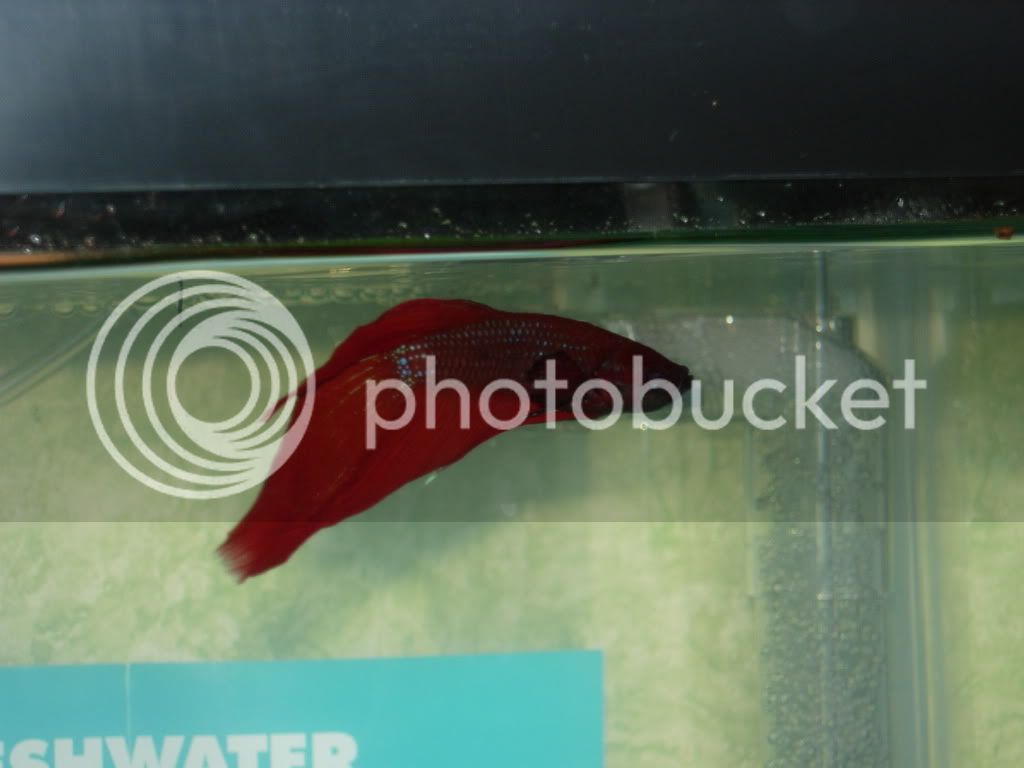 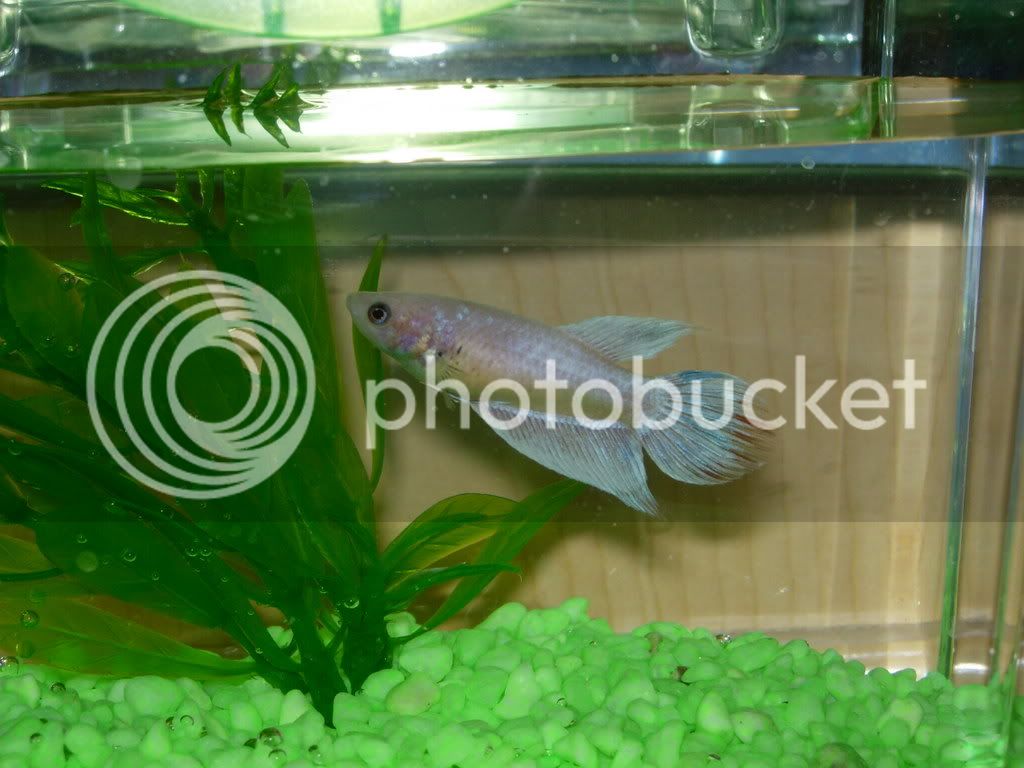 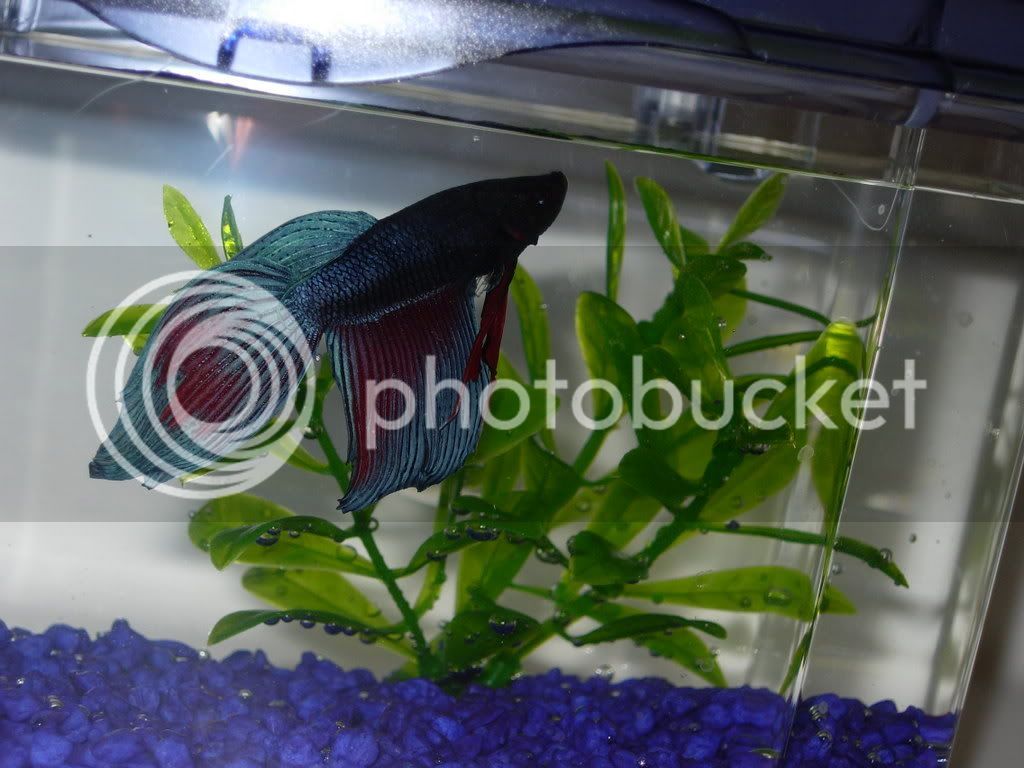 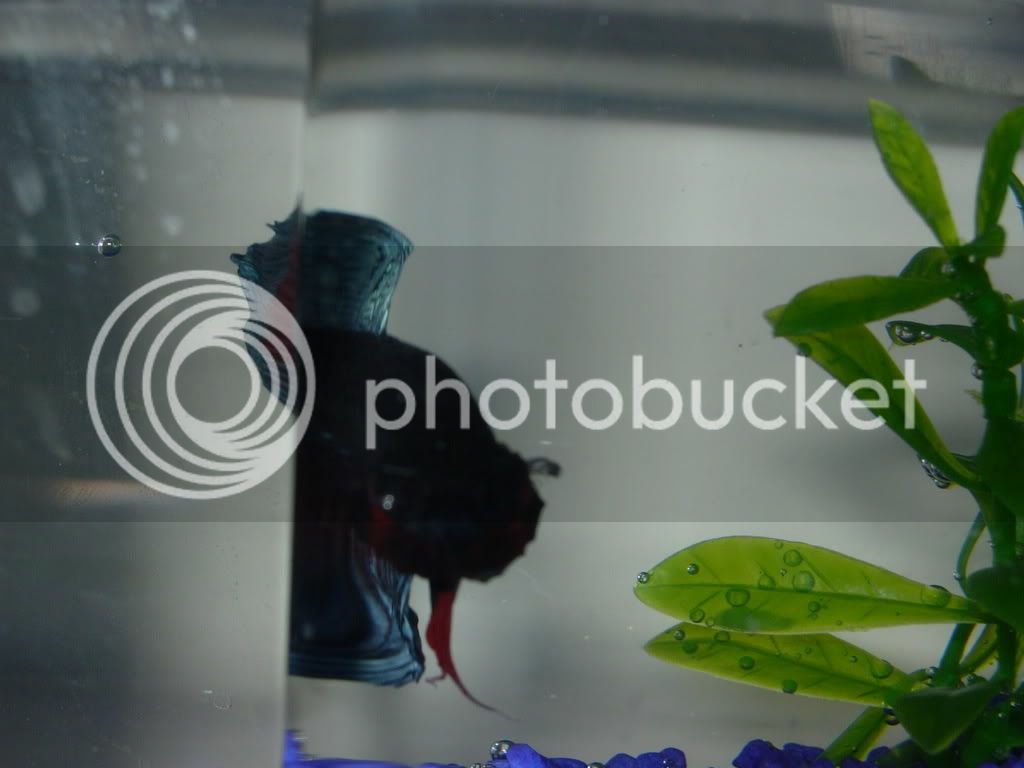 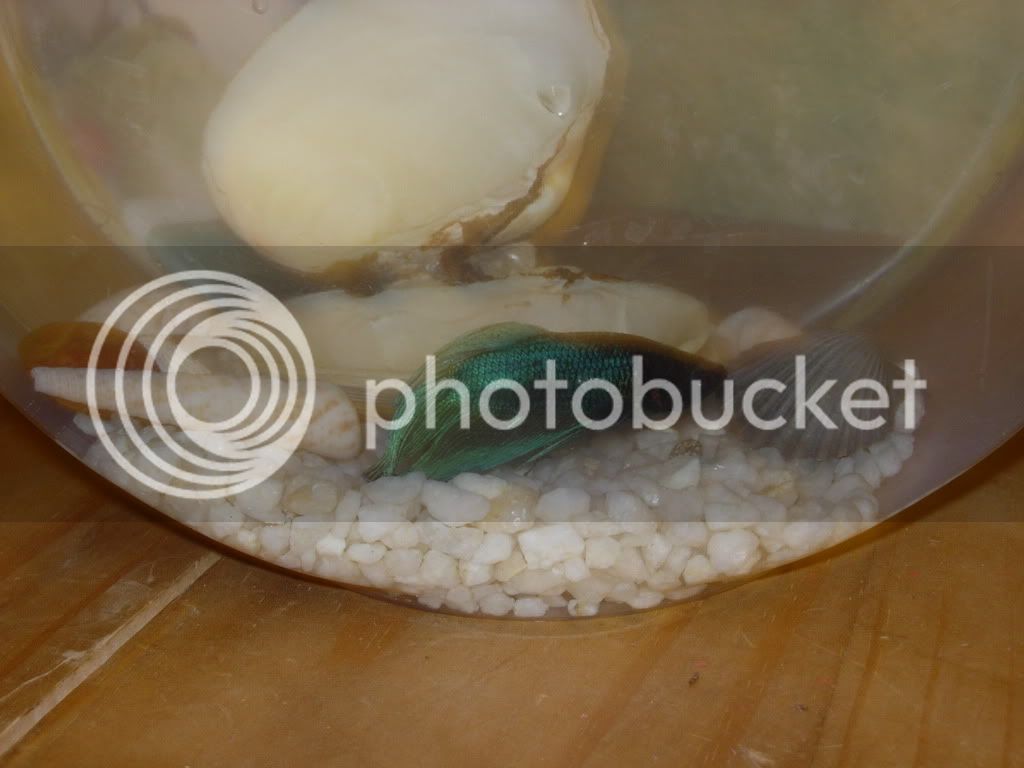 Here are some clearer pictures of the oviposter. (though this girl has almost fooled me in to the unlikely belief that she might be a male plakat with an oviposter, the way she's constantly flaring up. ) 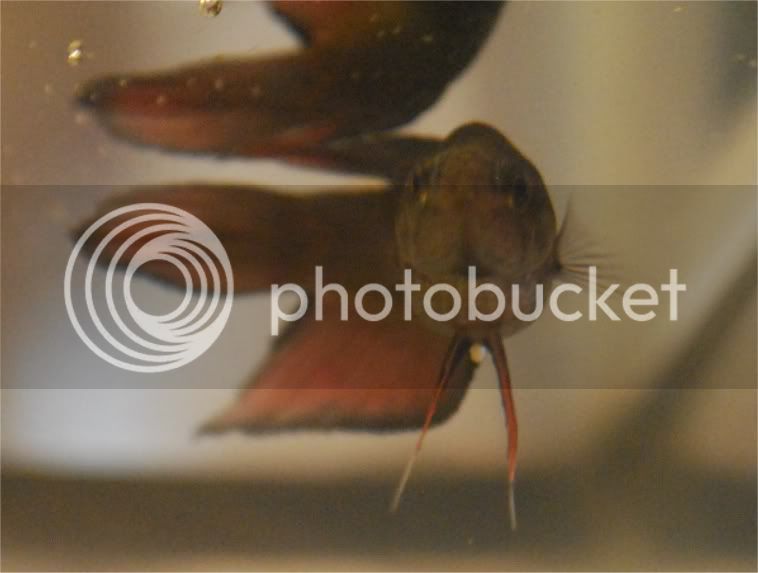 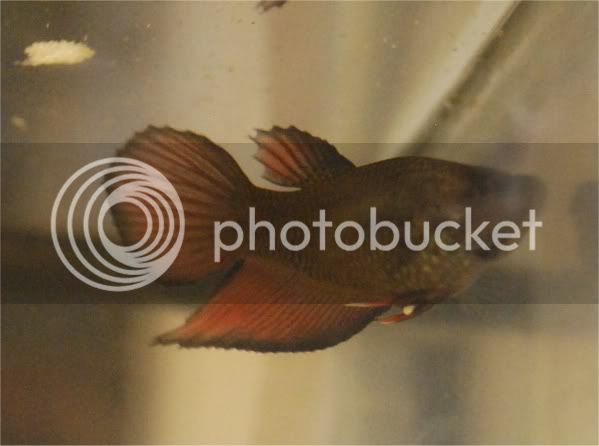 Notice how feminine he looks when he's not flaring?

Female CT(Crowntail) In A Breeding Chimney

Some Info, Hope it helps other people Sex them.
1. Females always have an Egg Spot.
2. Males have longer Ventral Fins, note on my male his Ventral fins Extend a lot when flaring and you can even see how long they are when he isn't.
3. I have found females usually have a rounder stomach.
4. Males are Usually more aggressive. My males flares at everything including his food, My females don't even flare at their reflections or each other.

I Love Betta Fish!!!! They Are My Favorite Fish

Location
Behind You....... Ninja Style 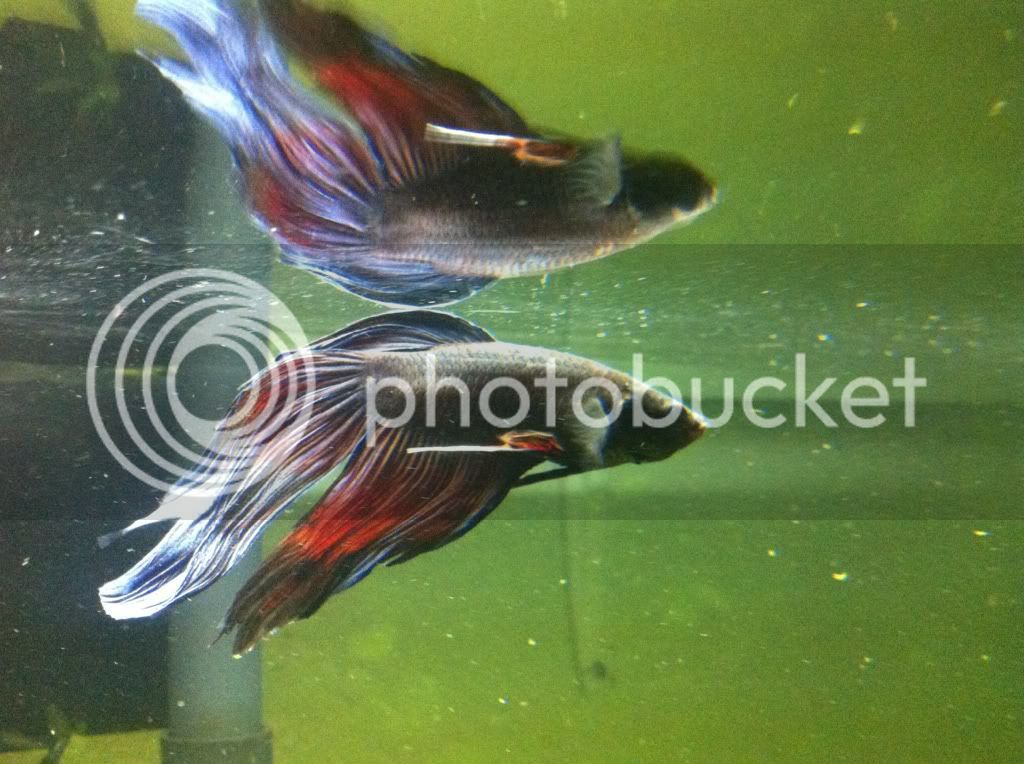 Cherry shrimp, how long can they stay in a bag...?

A moment ago
JuiceBox52