I had a macrobachium shrimp in my tank. My goldfish started getting ripped fins about a month or two ago, but I didnt attribute it to him at first. Long story short I caught him attacking one of my celestial goldfish's eyes twice within a couple of minutes, which I had also noticed looking a bit poorly that day, so it likely wasnt the first time. The shrimp was promptly removed from the tank. The goldie's eye was bloodshot and visibly damaged at the side, and had something like a small piece of skin dangling from it.

2 days have passed, and I have kept the lights off to avoid hurting his eyes more, as being celestial they are pointing upwards, but I will have to have them on at some point tomorrow unless I remove all my plants. Today his eyes are covered in a loose thick cloudy film, and again there is a bit hanging from it. Both eyes are affected, but the badly damaged one is worse and is also blood shot. I have just added a little salt in the hopes that will help. He also seems to not want to or unable to find food. The other goldie's shredded fins have also now become black-tipped, which I assume is fin rot. HELP!

Very worried, what do I do? It is important this is sorted asap as I am planning to be travelling 8 hours with them on the train in a weeks time, which will obviously be very stressful for them.

Tank size: 60 litres
Havent done water tests yet, no time, will do tomorrow if needed. Tank is cycled though, been set up for 2 and a half years although as a tropical tank till about 6-8 months ago, so ammonia and nitrite will be 0, nitrates will be high, they always are as both nitrate and ammonia are present in my tap water.

Volume and Frequency of water changes: 70% every 2 weeks

Chemical Additives or Media in your tank: none

Recent additions to your tank (living or decoration): none

Exposure to chemicals: none
OP

Please help now the film that was covering his eyes is hanging off, and it looks like he has no surface to the side of his eye...

someone tell me how to help him

50% water changes daily for the first week, every other day for the second week. Fresh water is the best thing there is for helping damaged fish to heal. I'd also wait 10 minutes before adding dechlorinator to the replacement water, let the free disinfectant provided with tap water help to prevent any bacterial issues.
OP

Tolak said:
50% water changes daily for the first week, every other day for the second week. Fresh water is the best thing there is for helping damaged fish to heal. I'd also wait 10 minutes before adding dechlorinator to the replacement water, let the free disinfectant provided with tap water help to prevent any bacterial issues.
Click to expand...

Thank you for replying

Should I be adding any meds or salt? Wont the chlorine kill my filter bacteria?

Should I be separating him from the others? I only have a 10 litre unfiltered tub and a biorb (uncycled as unused at the moment). The biorb is a no I think, as I think he will bang his eye on the ceramic media and bubble tube, but maybe the tub? Or I could move the other potential threats (e.g the WCMS and other shrimp) to the biorb? I'm worried they will take advantage and hurt him.

Also, I dont have 2 weeks I'm moving on Friday. I have two options, they come with me on the train on Friday, or they stay for another week where they will be visited and fed ervy 2 days but the person isnt experienced enough to do anything else, and then I take them on the train the following Sunday. The journey is 8 hours.

Meds or salt won't help nearly as much as fresh water. If there were enough disinfectants in tap water to take out the bacteria in a mature filter you wouldn't be able to drink it, but you could clean your oven with it. Most of my tanks are drilled with overflows for water changes, hang a hose, straight tap water in, time out 50%, add dechlor afterward. Old school trick, many folks do 25% without adding any dechlor at all.

I'd go the week with the daily changes, I don't see the wcmm's bothering them, but I would watch for it, anything is possible. If anything I'd move the others, the goldie has had enough trauma & drama for a while. See how he looks at the end of the week & go from there.
OP

I have plants in the tank, but is it going to be best to keep the lights off because of his eyes? I worry as celestials have such big eyes anyway, and pointing upwards... I can remove the plants if need be, was planning a rescape after I move anyway
OP

I finally got my camera to work, the pics arent very good, but you can see some of the damage... its gotten worse, not sure how, the big black thing on the side of his eye is actually a huge hole along with bits of eye tissue... sorry for so many pics but one doesnt really show it well.. 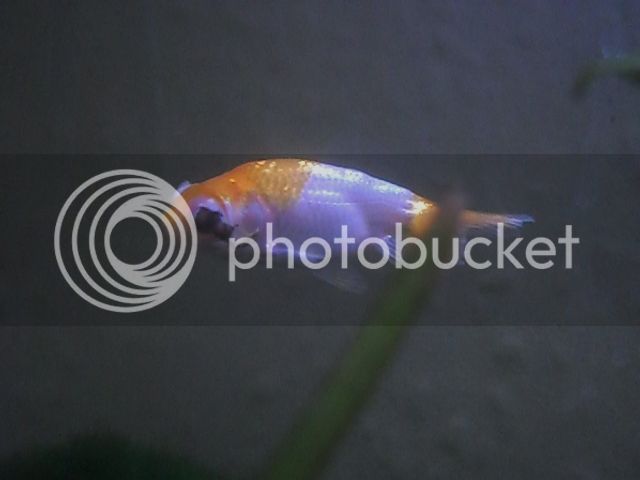 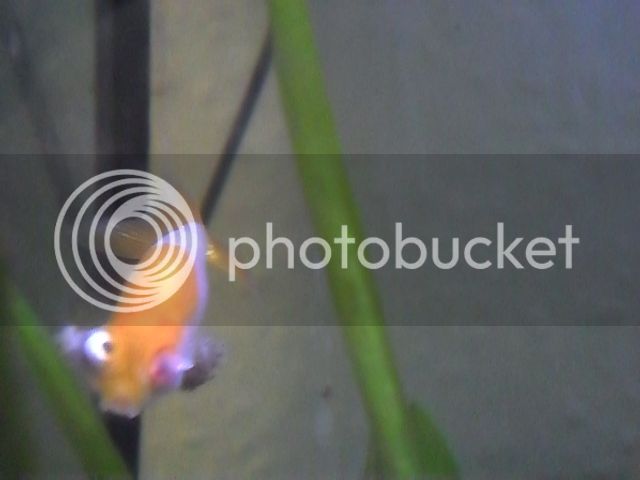 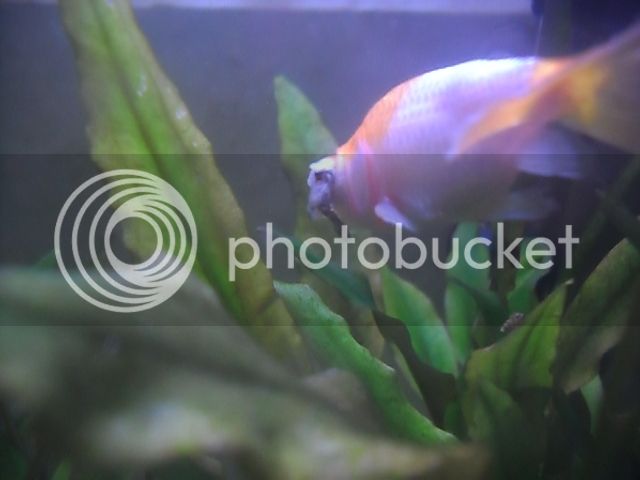 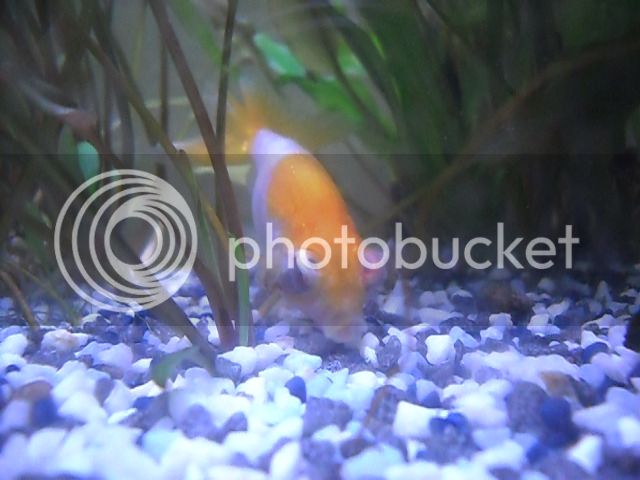 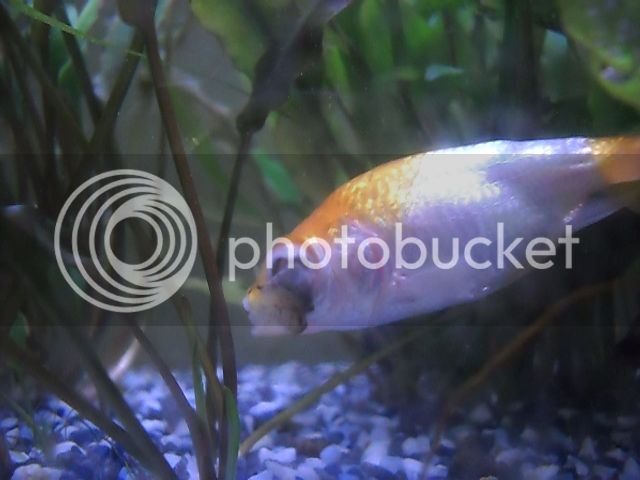 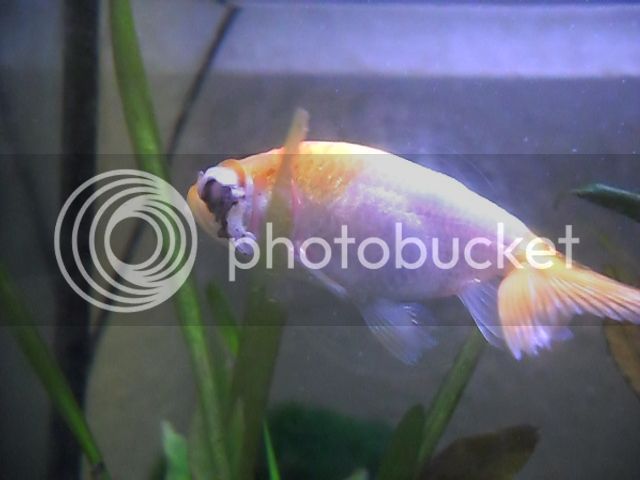 This is a pic of his friend when healthy, this is what his eyes should look like:

The hanging bits have now gone, leaving a hole in each eye. Any advice?
B

Hi i was wondering about the outcome of the injured fish ? Did it heal fine or not as i i have a celestial with an injured eye as well now.
You must log in or register to reply here.
Share:
Facebook Reddit Pinterest Tumblr WhatsApp Email Link

R
What is wrong with my Mollie.