Blue-green algae seems to be breaking up! I added a pretty strong powerhead blowing right along the bottom, and reduced the photoperiod by an hour. I've also been vacuuming the sand every week. Seems to be helping.

Could we see a photo of how the tank is doing?? It's been a while!
Glad to hear the bga is going away now
OP
OP

Yeah, I need to get a new video out. Stand by.

In other news, The Wet Spot has been out of whiptail cats and marble hatchets for MONTHS. And it's too cold to order, anyway. It makes me sad.

Well, I tried to get a video for Rocky, but my new phone doesn't have enough memory to take video. So for now, some photos will have to do.

An angelfish. There are five of them in the tank. They are about two years old now, and really taking on a nice blue sheen. They're really fun; tons of personality. They seem to enjoy watching the people in the office as much as the people enjoy watching them. They're always getting into these funny, twitchy shoving arguments. They remind me of boys in the middle school locker room. But the tank is big enough that they can get away from each other when they want to, so fights don't get out of hand. I've kept angels in smaller tanks, but I don't think I would again. They're too intelligent to keep alone, in my opinion, but they're aggressive enough that they need a really big enclosure to get along. 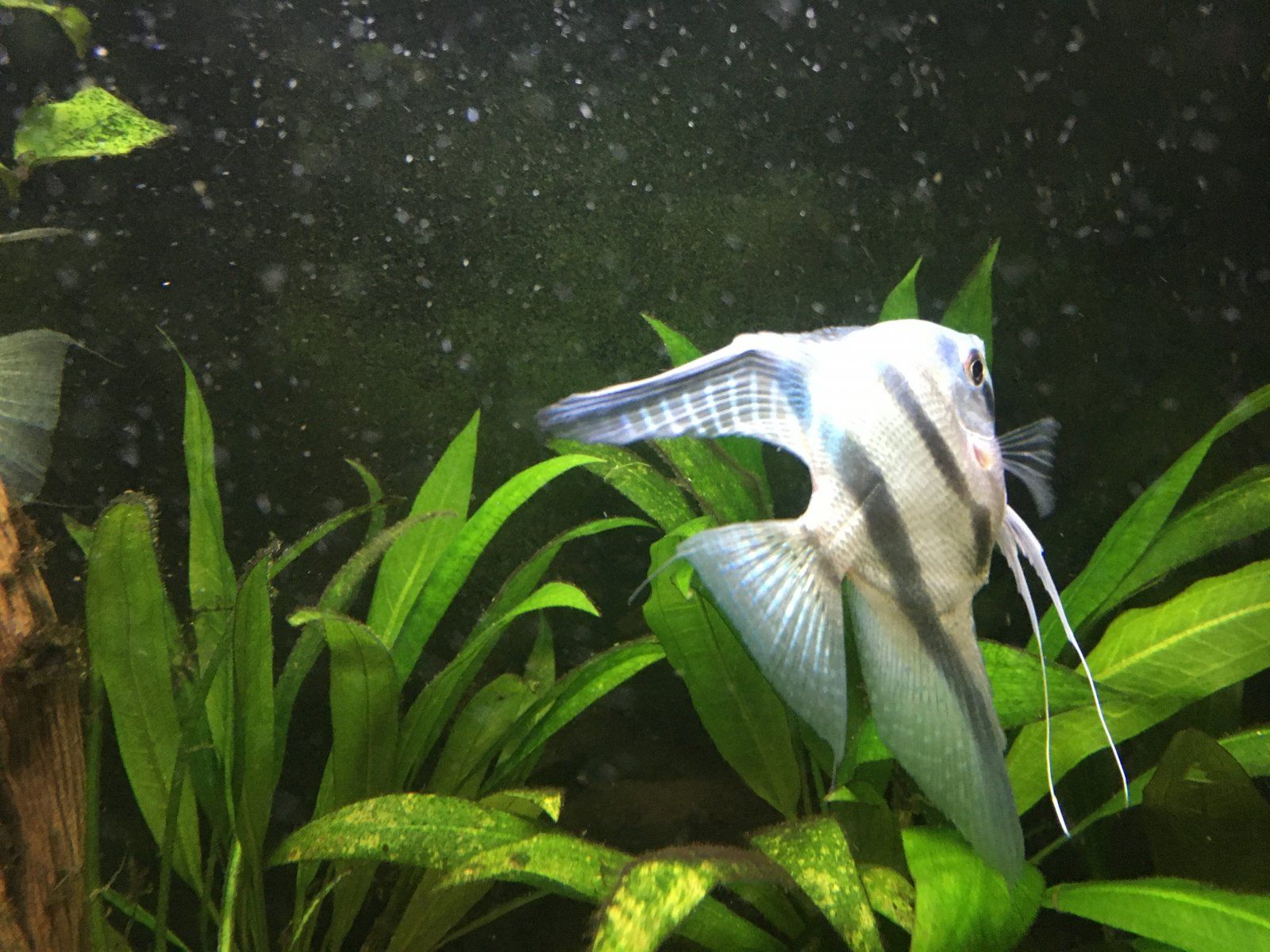 Red phantom tetras. I have a school of about 15, I'd guess. I think I have two different strains. My original ones, like the one on the far left, are deep red. The group I acquired last summer, like the one in the foreground, are more of a silvery-pink. All of them are rather shy, schooling under the tree roots. I think the angelfish kind of freak them out, even though I've never seen any attempted predation. Or maybe they just like shade. 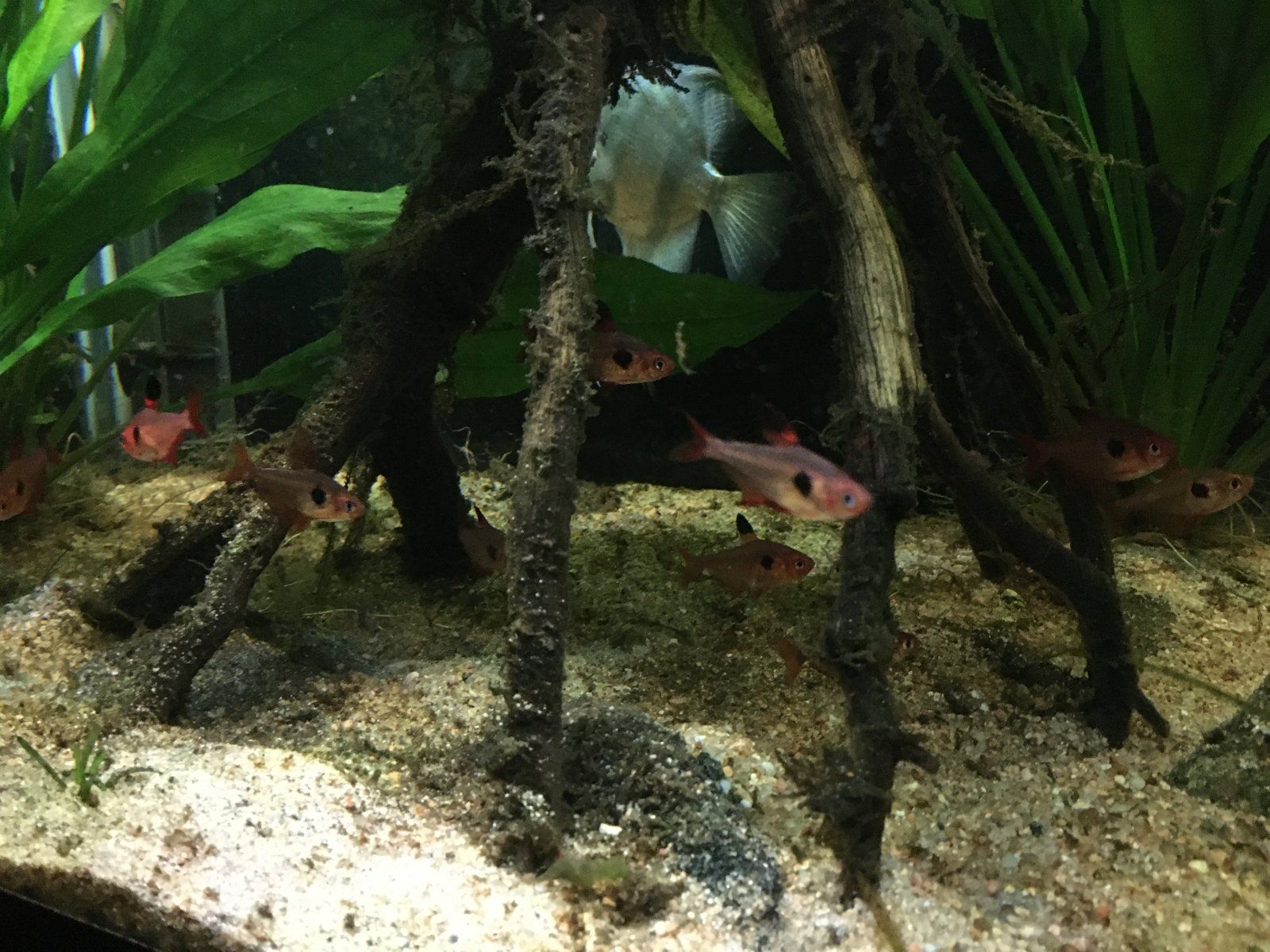 My one poor, lonesome little Venezuelan cory. I started out with a school of adolphois, then a school of these. None made it except this little guy. Despite pristinely clean water--no ammonia or nitrites; nitrates consistently under 5 ppm, when it registers at all--they all lost their barbels then gradually disappeared. Lost barbels are usually a symptom of ammonia poisoning. Puzzling. This tank has long had a LOT of gunk on the bottom. The past few months I've been fighting a battle with cyanobacteria/blue-green algae, and that includes frequently cleaning the sand. It's making a difference. I might try more cories next time I order fish. 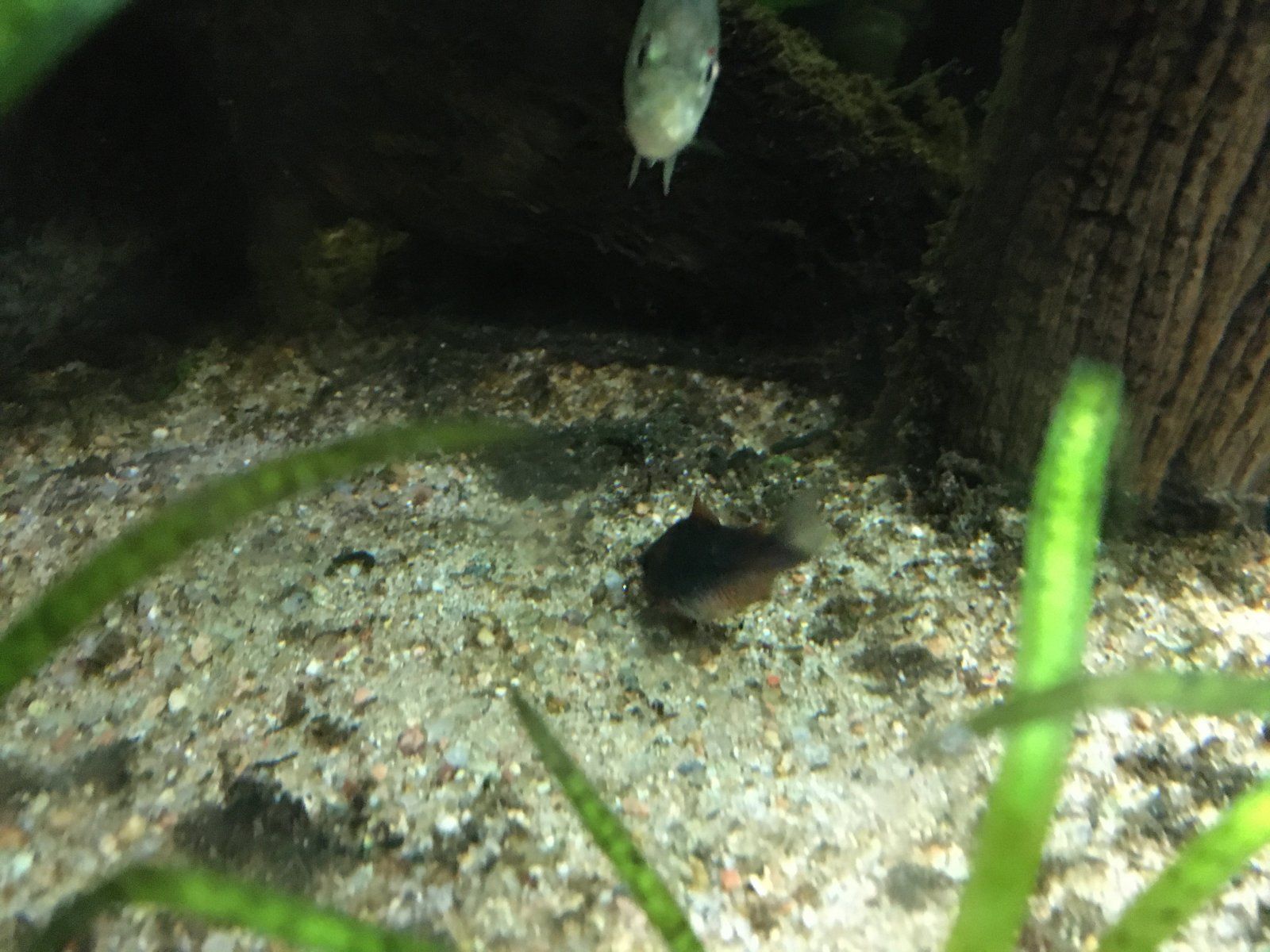 Diamond tetras. I had great hopes for these, but I'm not a big fan. I think that to look great they need a well-lit, open tank where they can really catch the light. In a shady tank like this they usually just look gray and nondescript. Probably wouldn't get them if I had it to do over again. 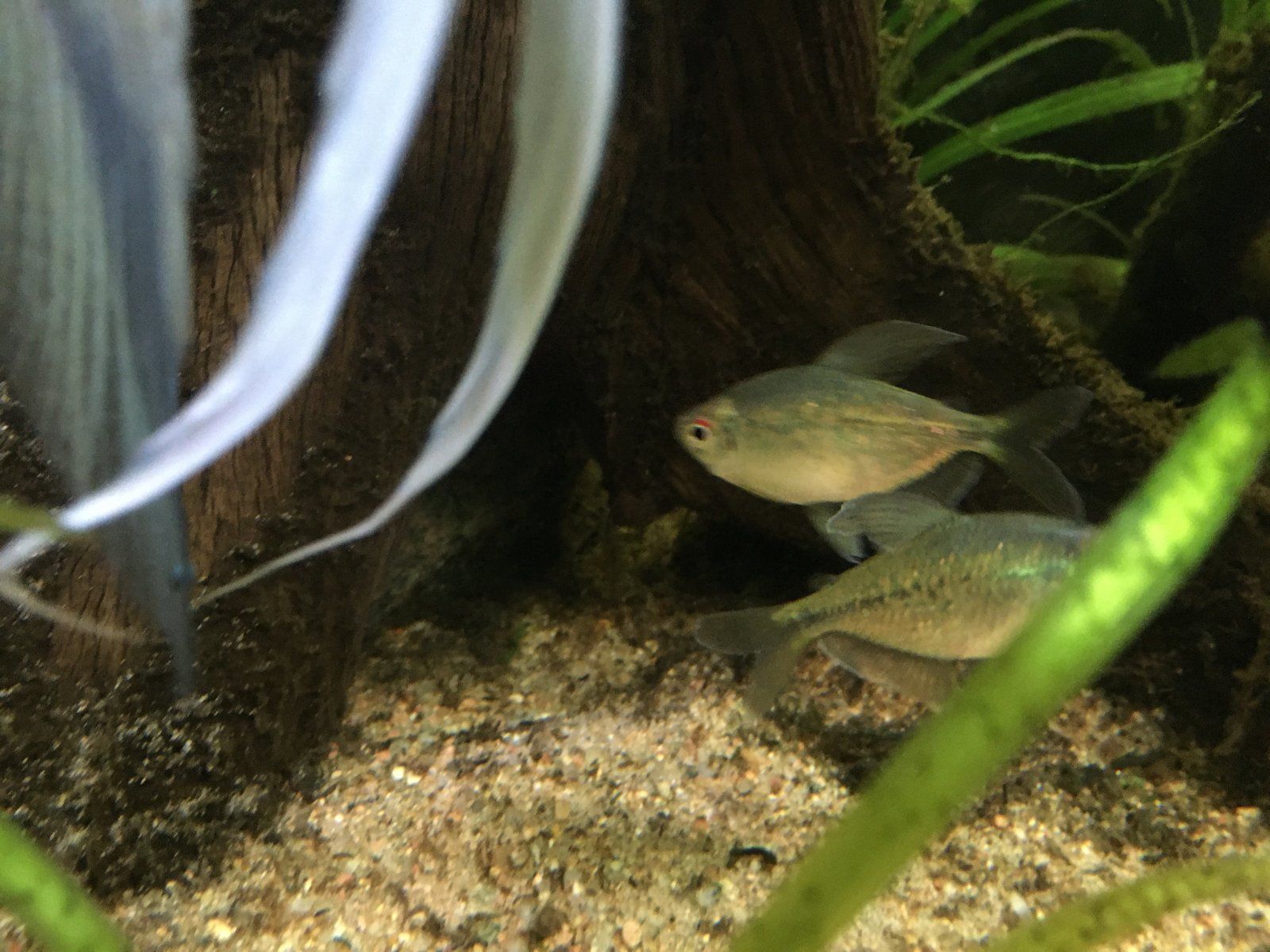 Royal whiptail. Possibly the coolest fish in the tank at the moment. Behavior-wise he isn't much. He acts like a typical member of the pleco tribe, which means he most lays around and sucks on things. But he has gotten big and he looks really cool. Interesting eyes, too. Looks like he's up to something. Definitely getting more of these next time I order.

Another shot of the royal whiptail, with a blue angel mugging for the camera. As usual. 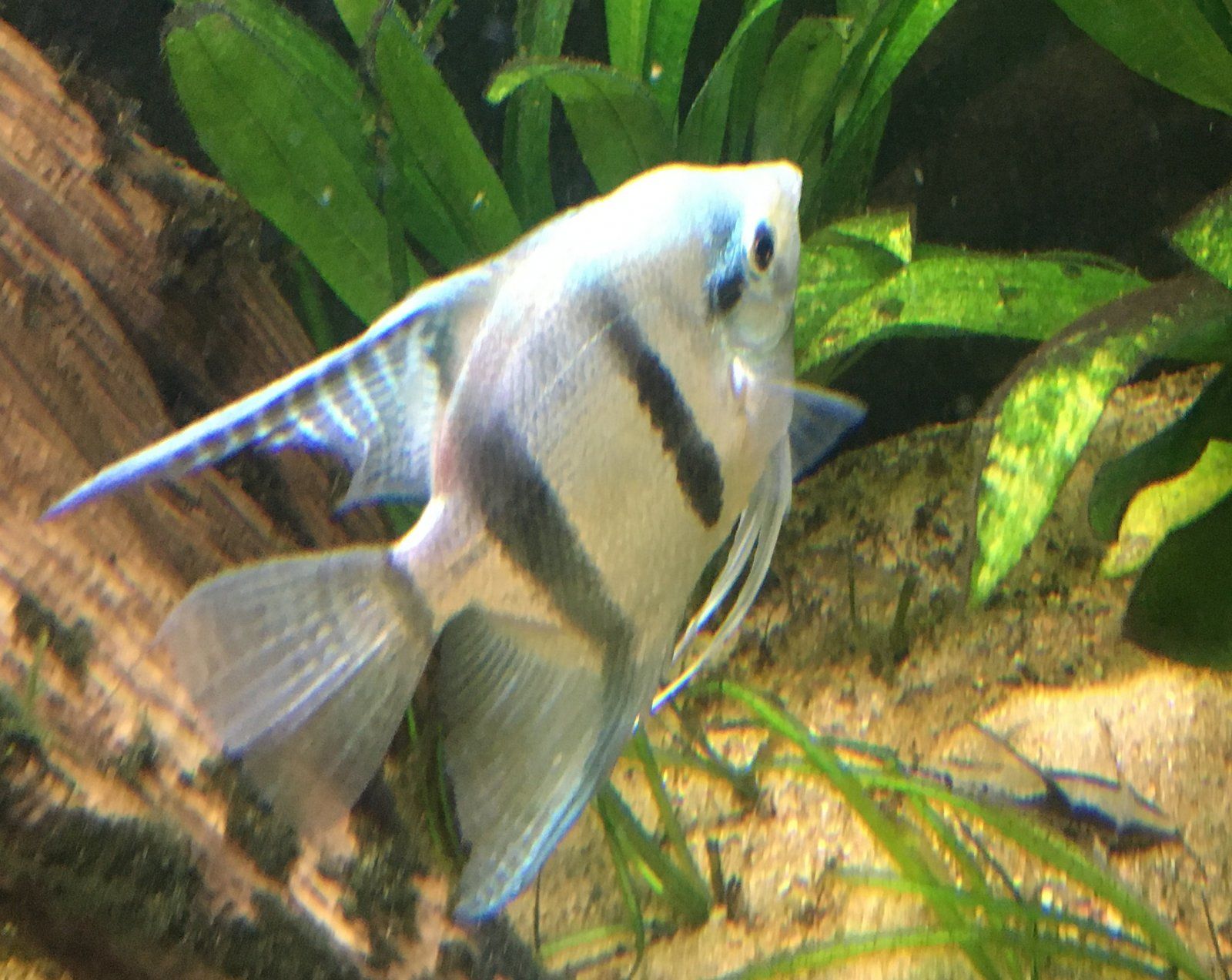 Not appearing: Marble hatchetfish. Of the original ten, I think I have about seven. They are BEAUTIFUL, but I never see them unless I really go looking. They hide out among the floating plants and they're really hard to see. Might try getting ten more next order; maybe they wouldn't be so nervous if there were more of them.

Also, ottos. There are a whole bunch of them, and they're fat and happy.

My South American fishies were being very photogenic today. 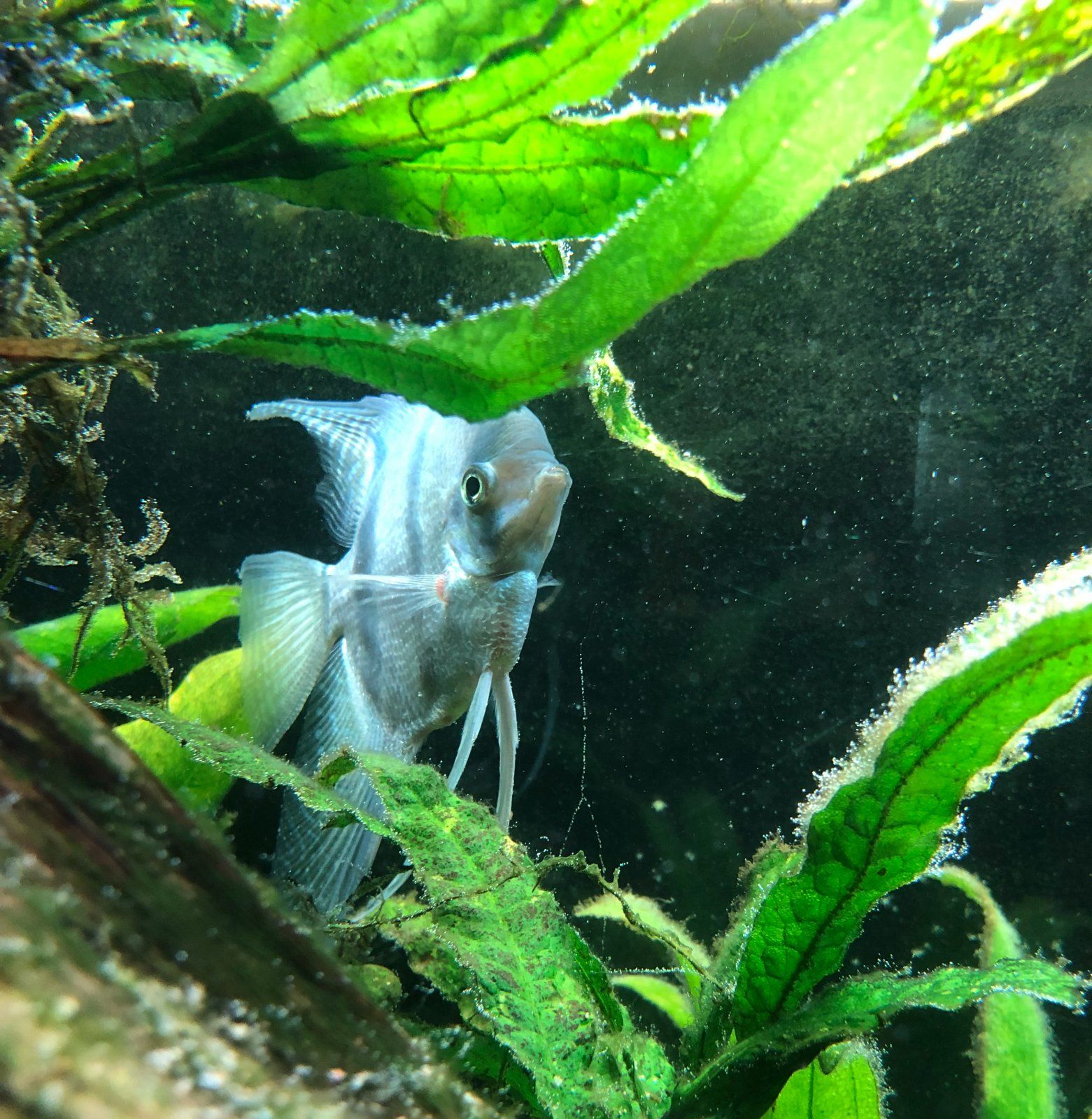 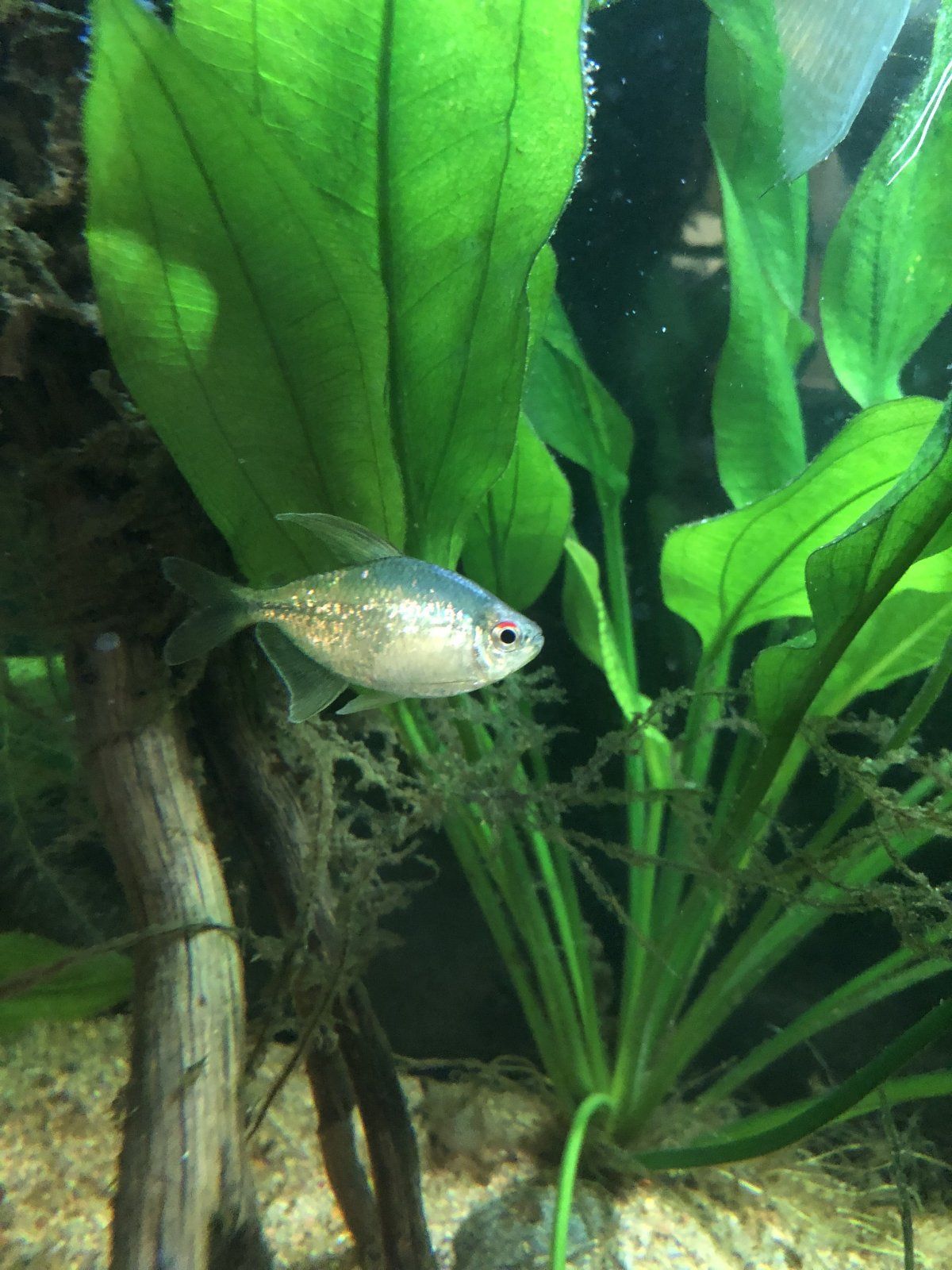 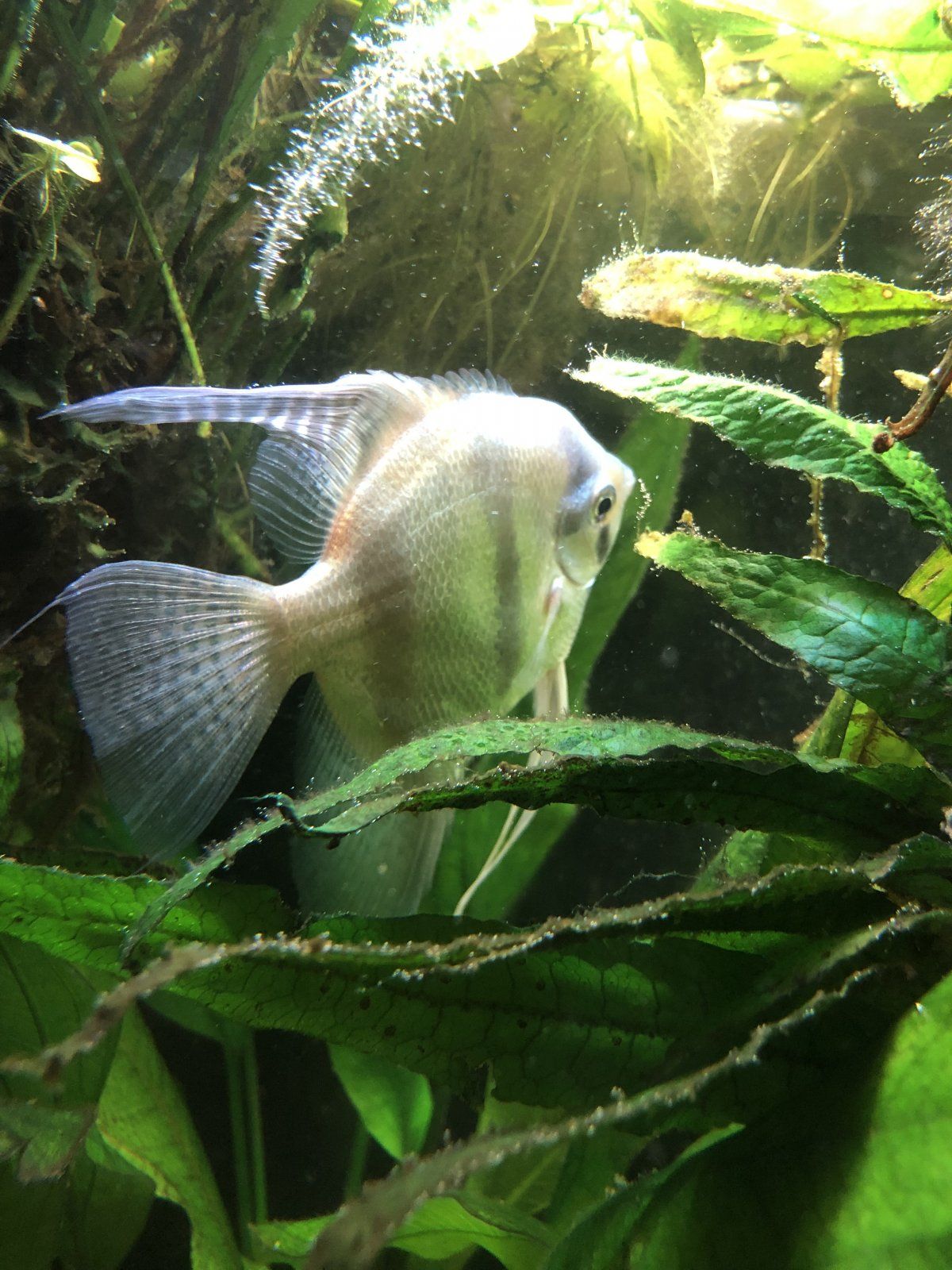 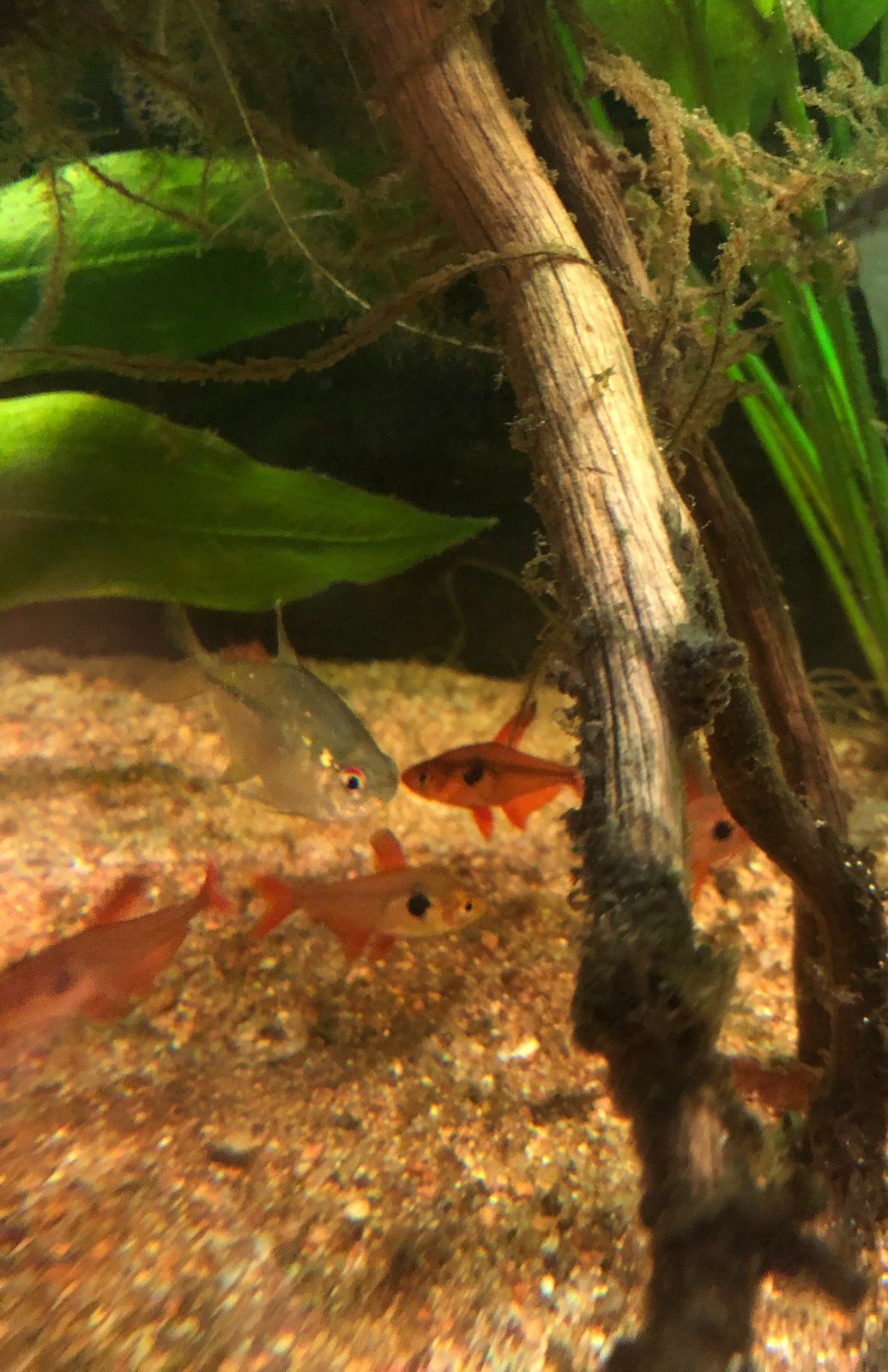 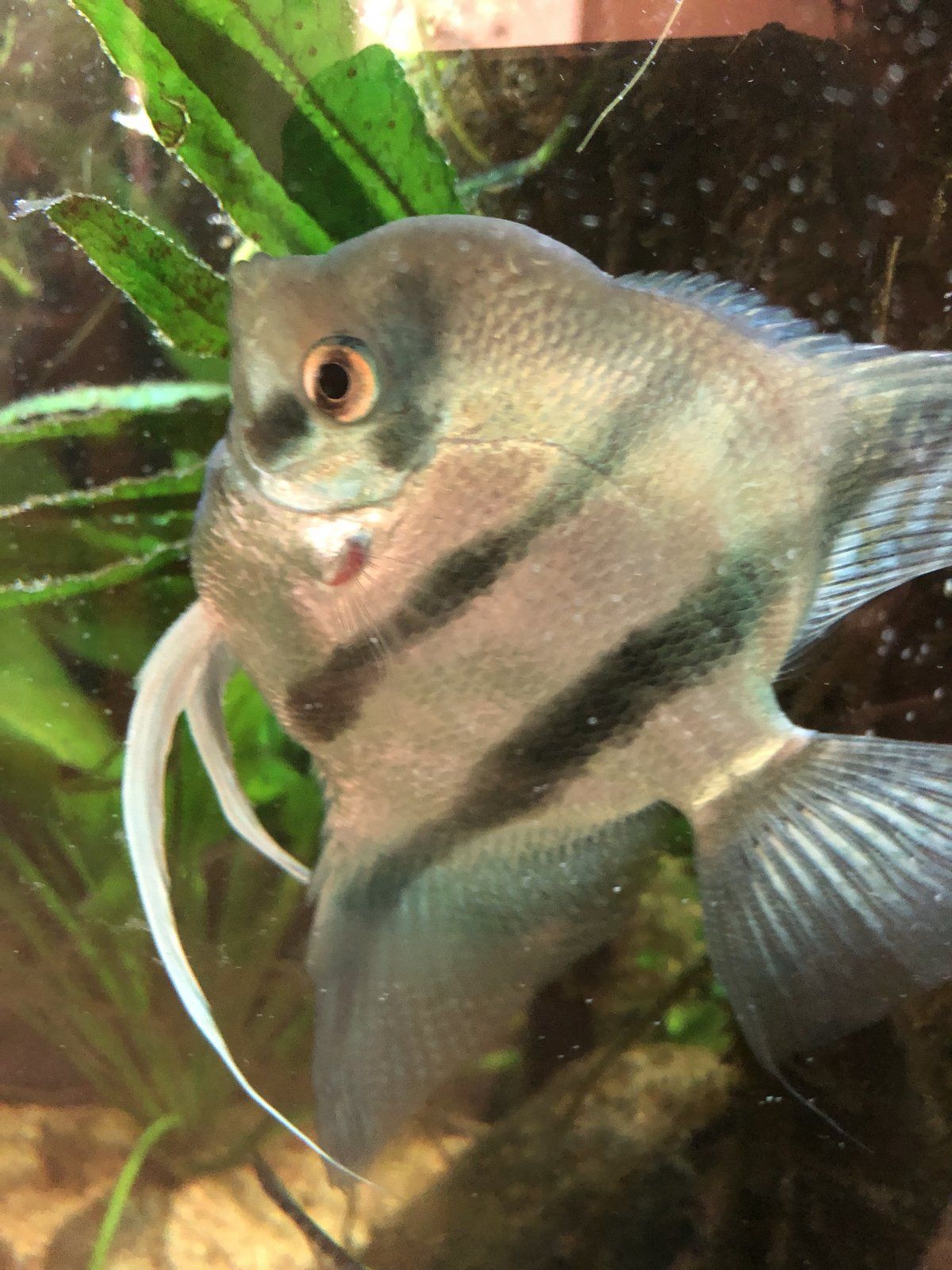 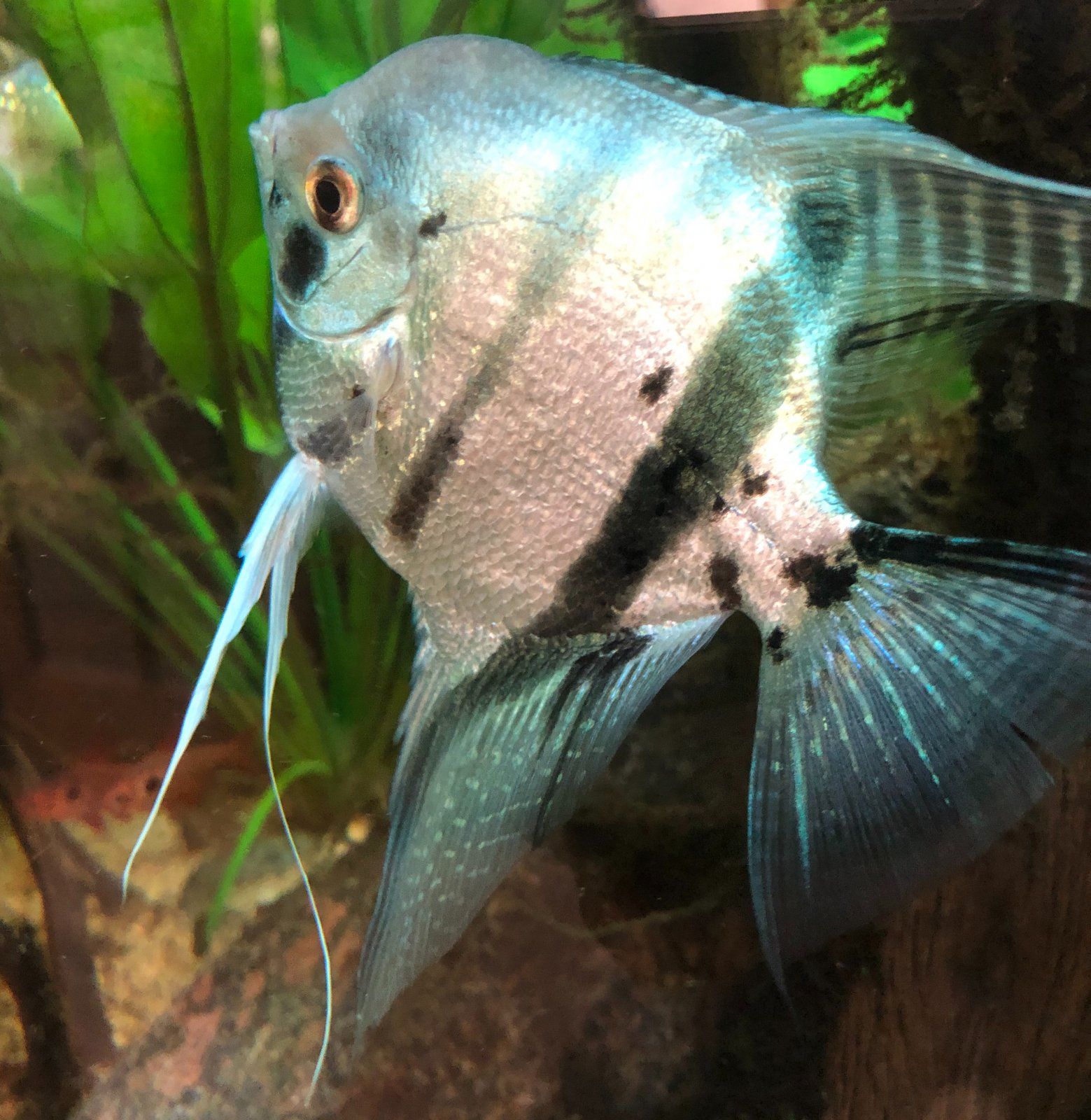 Great photos, the angels are gorgeous and I love the lone sparkly diamond.

Beautiful fish. I love diamond tetras. Maybe someday I will have some again.

That's a great nuchal hump on the angel!
OP
OP

BigBen1989 said:
That's a great nuchal hump on the angel!
Click to expand...

All but one of them have that. Poor girl.

WhistlingBadger said:
All but one of them have that. Poor girl.

Your tanks always look so great and natural looking. What did you use for substrate in this one? (I'm trying to have more natural looking substrate & my go-to light sand isn't satisfying.)
OP
OP

otterblue said:
Your tanks always look so great and natural looking. What did you use for substrate in this one? (I'm trying to have more natural looking substrate & my go-to light sand isn't satisfying.)
Click to expand...

Thank you! This setup has an inch of organic potting soil covered in two inches of rinsed play sand. Edit: If I had it to do over, I'd probably leave out the soil and just go with the sand.
Last edited: Monday at 9:47 PM

WhistlingBadger said:
Thank you! This setup has an inch of organic potting soil covered in two inches of rinsed play sand. Edit: If I had it to do over, I'd probably leave out the soil and just go with the sand.
Click to expand...

Thank you!
You must log in or register to reply here.

What is this crab?

This is extraordinary....footage of a dog eating its way out a front door

Substrate what should i do