I wanted a relatively cheap LED lamp, that I could clip onto the sides of my Nano tank, should the one supplied with that tank fail.
I also wanted a little future-proofing by getting a lamp that would provide a particularly useful spectrum and intensity for plants, especially if the lamp provided with the Nano proved to be inadequate.

This lamp is available in a 'Plant' version, or a 'Sunny' version, rated at 8000K/470 lumens and 6500K/600 lumens respectively. (Both versions are also available in either a black or white finish).
All are rated at 6W.

The lamp simply clips onto the side of a tank and is fixed via a rigid stem.

The lamp only has On and Off settings, these being controlled by a simple on/off switch. There is no dimming facility.
NOTE that my lamp only came with a European 2-pin plug, so I had to obtain an adapter.

The 'Smart' part of the lamp relates to the individual LEDs and refers to a 'self-repair' facility. On the Plant lamp, there are a number of un-used LEDs and should an active LED fail, then one of the 'spare' LEDs will switch on.
On the Sunny Lamp, should an LED fail, then the remaining LEDs will burn brighter, to compensate for the potential loss.

The lamp has both white and blue LEDs and the light given off is a clean, white light. 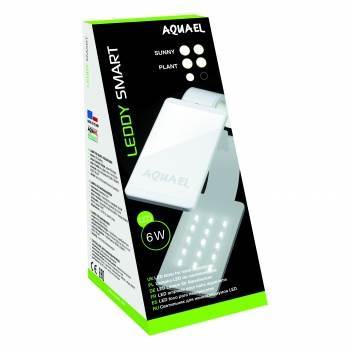 I’ve had several leddy tube light units (sunny 6,500k) in the past for my smaller tanks and always liked them, they do promote good plant growth for the low tech tanks with just once weekly dose of ferts does the trick nicely.

Definitely worth recommending.
You must log in or register to reply here.

How many mollies can go in my community tank without overstocking?