Common Name : African dwarf frog, congo frog; do not confuse this frog with the African clawed frog (see below)

Care : Most sites recommend a gallon per frog. Only keep dwarfs with peaceful fish, they make ideal tank mates for bettas. I keep 2 dwarf frogs in a 2.5 gallon critter keeper but hope to upgrade and add more frogs soon. The tank should have a secure lid so the frogs can’t escape and the water should be treated with dechlorinator as it should for fish. Ideally frogs should be kept at 21-27 degrees centigrade so unless they are in a warm room a heater is necessary. Filters aren’t necessary if the frogs are alone but I have a sponge filter in with mine and they don’t seem to mind. Beware of internal filters which can trap the frogs delicate legs if they get sucked in, cover it with fine mesh to prevent this from happening if the filter has large gaps. African dwarf frogs prefer their water pH 7.2 – 7.6, mine are at pH 7 and have spawned before so they must be happy. I have sand in the bottom of their tank and they have bog wood covered in java moss to hide under. Avoid large size gravel as they could swallow a piece when they lunge at their food.

Feeding : African dwarf frogs will take most live and frozen insect type foods, mine love bloodworms and brine shrimp. I feed mine every other day and they search for food by smell not sight, they will lunge at each other when looking for food. If they are kept with fish, you can squirt food at them with a turkey baster to ensure they eat before the fish eat it all.

Sexing and breeding : African dwarf frogs are quite hard to sex unless you have a few to compare. Females are usually bigger than males and have a pointier tail. Males are slightly darker and skinnier and their skin looks more bumpy. Adult males have two white bumps one behind either foreleg on their side. There are reports of African dwarf frogs breeding but it is said the tadpoles are hard to raise. Mine spawned twice when their tank was near the window and they received natural daylight, both times they ate the eggs. The male clasps the female for quite some time and she will swim around with him holding on. The eggs are 1-2 mm and float on the surface when first laid. It would be easier to move the parents to another tank than to try moving the eggs as they are very sticky. They should have an air stone running in the tank and the water should be kept at 23 - 27 degrees centigrade then the eggs will hatch in 5-7 days. Newly hatched, the tadpoles are 2.5mm they will need tiny foods such as infusoria until they are big enough to eat microworms then bigger foods such as bloodworms. The tadpoles usually take 4-6 months to turn into frogs.

Comments : There have been reports of African dwarf frogs living for 18 years if properly cared for. Male frogs will sing to females though I haven’t heard the female sing. It sounds like a low buzzing or humming sound. They are said to shed their skin quite often, though I have never found a skin in with mine so perhaps they eat it. Mine know when they are going to be fed and will come to the corner of the tank and stand on their back legs waiting, sometimes they lean backwards and fall over. They are really cute little critters.

How to recognise a dwarf frog : Not to be confused with African Clawed frogs (Xenopus Laevis) Dwarfs have webbing between their feet and tiny black claws. They are never sold in an albino or golden form. Do not keep dwarfs with clawed frogs or they will be eaten. Clawed frogs have no webbing between their front feet and have buggy looking eyes on the top of their head. Dwarfs have flatter looking eyes more towards the sides of the head. Dwarfs also appear skinnier around the waist. They are diurnal and will be out rooting around for most of the day. Clawed frogs grow 5 inches plus and are larger than African dwarf frogs. Another difference is that Clawed frogs need more like 10 gallons per frog.

The first picture is my female frog and the second picture is the male. 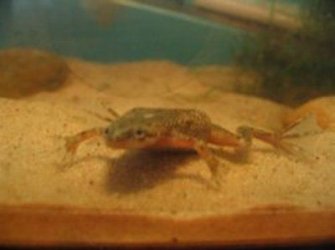 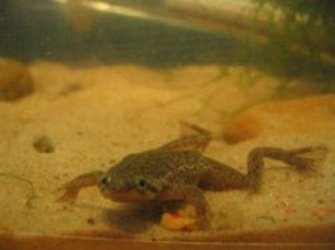 Since writing this, my frogs have had an upgrade to a 19 gallon tank which is divided into 2 with 4 frogs and a betta on each side and they are loving it. They are much more active in a bigger group

Great info! Great pics too! I have 4 of these delightful creatures who I've just re-homed into a 66 litre tank!
The larger 2 I've had for 12 months but although male and female and they have appeared to mate I've not seen any eggs. As they were
housed in a community tank, perhaps the fish have had them!
They do eat their skins after shedding and mine will eat any frozen or live foods I give them though flake is never touched!
I'm hoping that keeping them in a seperate tank will make feeding easier and with luck I might see them more often!
It's great to find others to share the enthusiasm with! 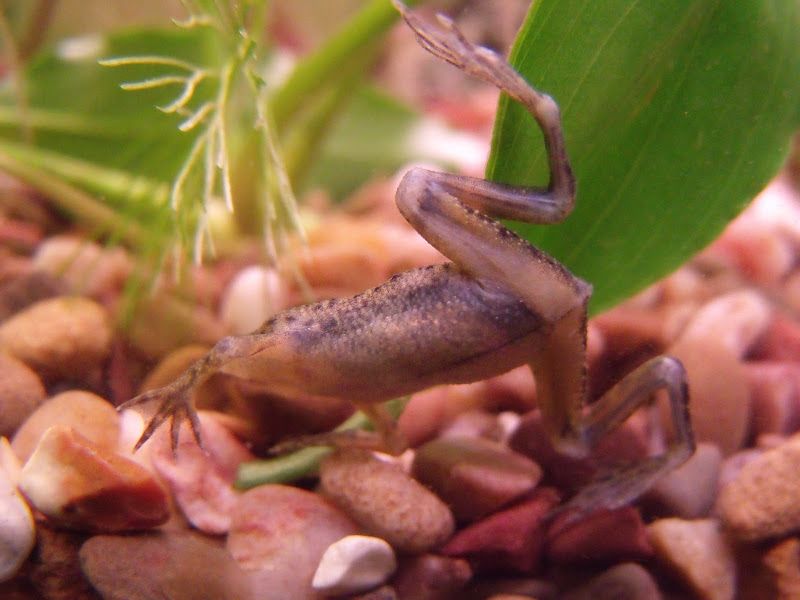 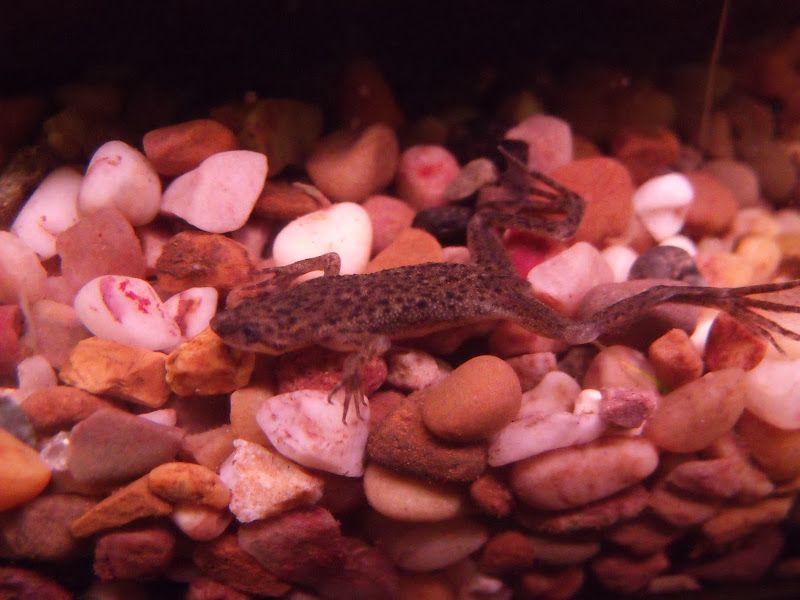 great thread! i never thought i would LOVE these little guys but i love my little Waldo! they are a great pet and easy to care for 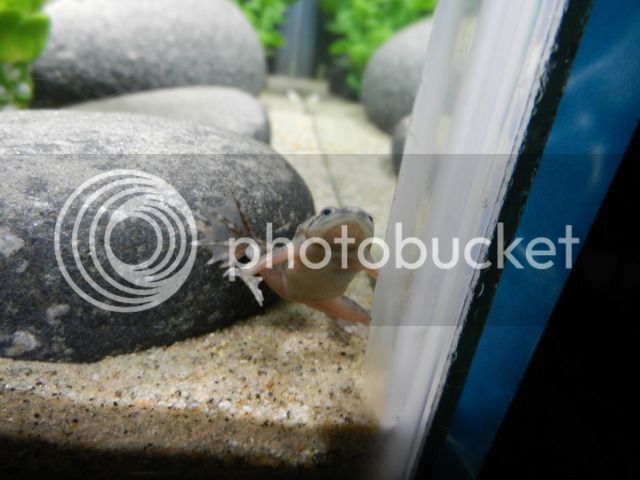 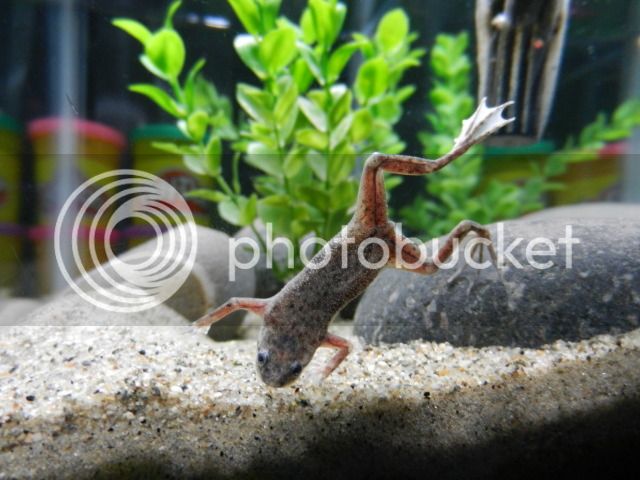 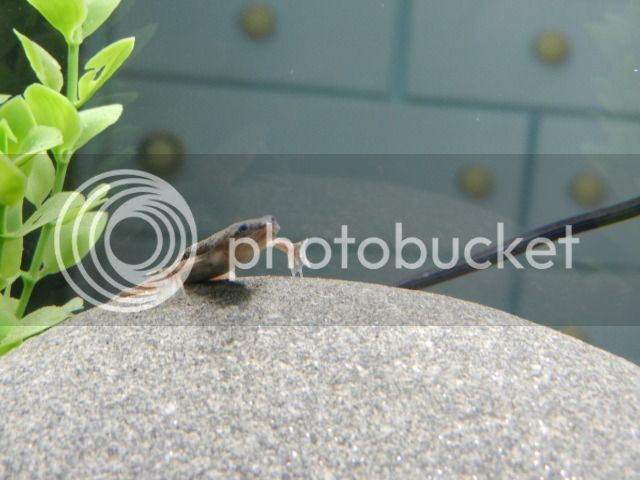 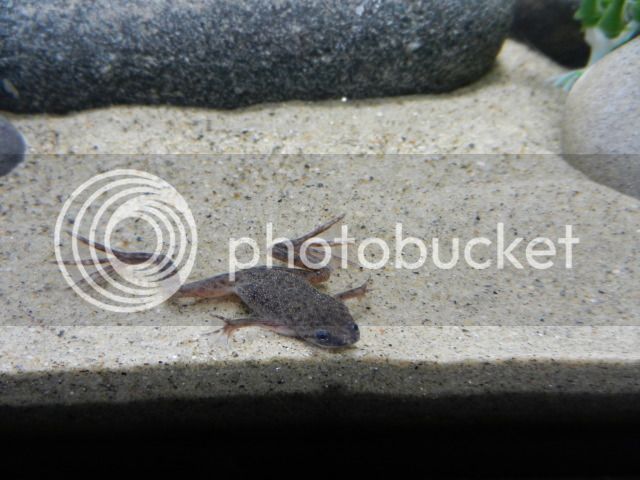 African Dwarf Frogs are delightful little monsters.   I'm always reading about sqirting food in front of them, using a plate, making sure the food sinks, etc. to ensure they find food- I think the frogs must have written those books.

I have five frogs in a five gallon heavily planted Fluval SpecV- if there is one speck of food anywhere in the tank they don't rest until they find it.  They eat from the bottom, the surface, and all levels in between, including my fingers if I don't let go the food quick enough.  I feed them mostly live whiteworms, frozen bloodworms, tubifex, and brine shrimp, but when I put the large, hard compressed pellets in for the Mystery snails I find the frogs banging their fat little selves into it nose first to knock off and eat pieces of it.  They killed and ate every ramshorn snail in the tank also.  I've put angelfish and guppy fry in for them, and they very quickly catch all those too.  I'm glad they stay small....

His name is Hobart and he's going to be 4 in August.
(Well, that's when I bought him)

Here he is in his old tank, I'm awaiting my 15.8gal to finish cycling and he'll have a new home. 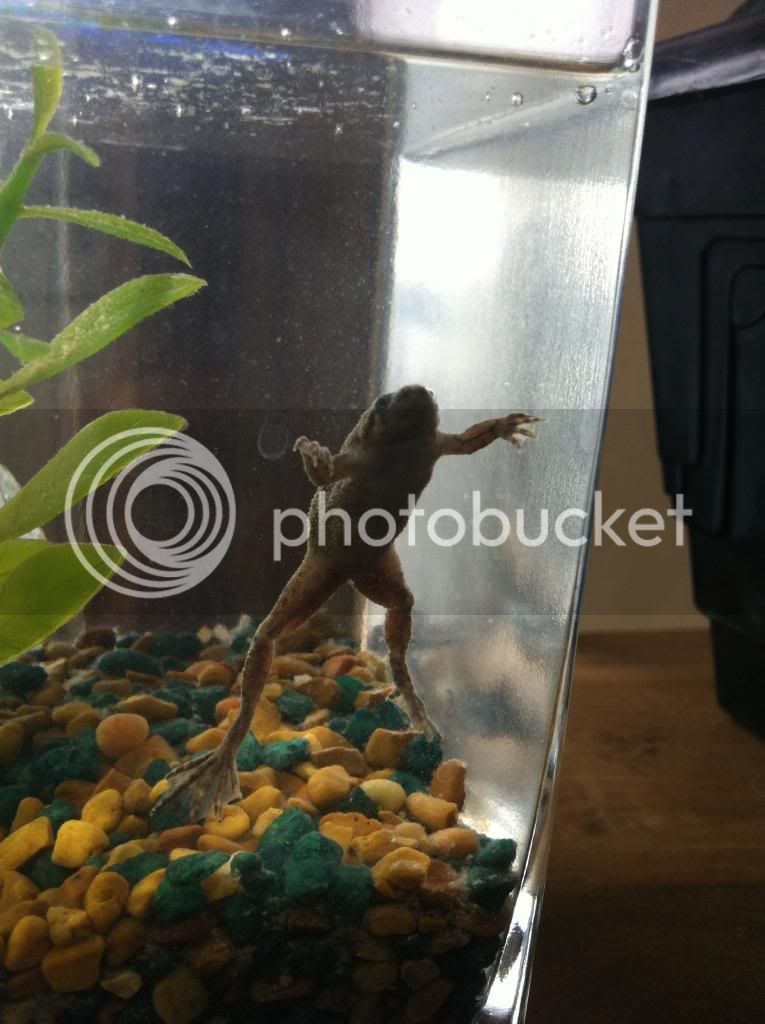 I have a small 2-3" terra cotta tray that you would normally put pots on top of. I put blood/black worms and other food items on it and the frogs know where to get the food from.
This helps keep the water cleaner as you can easily remove uneaten food after 3-5 minutes. Just thought i would share that information.

Great info by the way!
You must log in or register to reply here.