Scientific Name: Aegla species. A. platensis and A. affinis seem the most commonly traded species and have similar care needs.

Origin: Freshwater, commonly fast-moving rivers. All species are only found in the bottom half of South America, including Chile, Uraguay, Paraguay, Argentina and the southernmost tip of Brazil.

Minimum Aquarium Size: 50 litres, adding about 5-10 litres per animal. Tank height is not as important as ground space as Aeglids like to dig into the substrate and need plenty of substrate-level hiding places.

Preferred temperature: Around 20-22 celsius (68-72 fahrenheit). They are intolerant of warmer temperatures and are unlikely to survive temperatures of above 26c/80f for long.

Care: Two conditions are essential - the water must remain cool year round and must be well-oxygenated. A power filter with spraybar is ideal. Like all crustaceans, they won't tolerate copper or other heavy metals so be wary of medications and fertilsers used in their tank. The plant Anubis nana is supposedly lethal to them and should be avoided.

Housing: The ideal layout is one that provides different hiding places at substrate level where they can hide during the day. They often partially cover themselves with gravel or pull the substrate towards themselves creating a barrier. Rough, dark rocks or bogwood propped a few centimeters off the substrate is perfect. they'll either dig into the gravel under their or cling to the underside above the gravel. Other options include small terracota pots or half a coconut shell.

Since Aeglids can be very sociable, at least one larger cave should be provided so they can choose to hide together if they want to. It's normal for different animals to argue over caves and the perfect cave seems to be whichever one a smaller Aeglid is using. No matter how well you design the tank, one will decide to set up home under the heater or that piece of the filter you dropped in the tank.

Small animals seem much more sociable than large ones and are more likely to group together. Since they dig it's vital any decor is stable so they're not crushed. They will climb up anything the can hold onto and seem particularly keen on trying to climb up the tank corner backwards. They don't need access to land and won't climb out the tank. Plants are usually dug up, either because the Aeglid is sifting at the roots for food or perhaps because they want to nibble them. Floating plants like E. densa seem to make the Aeglids feel more secure.

Food: Feeding is easy as they readily accept flake food and sinking catfish pellets. Their natural diet includes a lot of plant debris and they love vegetable flake. Feeding behaviour ranges from gobbling up small catfish pellets to sifting through the substrate and picking up tiny morsals. A varied diet of frozen blooworm and different dried foods seems to keep them healthy. Live food isn't vital but they do seem to love small live worms (bloodworm, grindalworm, microworm).

Breeding: Sexing Aeglids can be challenging. The 5th leg pair, the tiny vestigal pleopods (swimming legs) mostly hidden by the tail, are larger in males. If you look very closely, a males genital opening is visible on the 'knee' of that little leg. To spot this you need to hold the Aegla and gently lift its tail until the leg is visible, an awkward process. A preganant female holds eggs under her tail for around 3 months before the perfectly formed babies separate. There's been very little breeding in captivity described by aquarists and it's unclear whether adults eat young ones (probably not).

Tankmates: Aeglids are shy creatures and tend to be scared of any fish larger than a danio. They are easily harrassed by other cave dwellers like bristlenose catfish or corydoras. Larger shrimp, even fan shrimp, will bully the Aeglids mercilessly. The best tankmate are dwarf shrimp, which don't spook them and are never harmed.

Comments: Aeglids will molt occassionally by extending the tail and backing out under it. A molted shell is still hard and looks exactly like a dead Aeglid until you pick it up and realise that there is no pink or clear flesh under the tail. Frankly your nose will tell you if it's a dead one - they really stink.

Aeglids are mostly nocturnal but will wander around during the day if the tank is well designed. They are clumsy and either very daft or very playful. I've seen one spend 30 minutes trying to climb over a large moss ball, repeatedly falling onto its back when it neared the top and its bodyweight caused the ball to roll. If it moved 1" left or right, it could have walked past the moss ball. Their main hobby seems to be evicting tankmates from their hiding places. This usually involves two large ones waving their claws at each other while a small one sneaks into the cave and wedges itself in tight. The displays of outrage are hilarious and I'm sure they sulk.

A large adult - look at those claws! 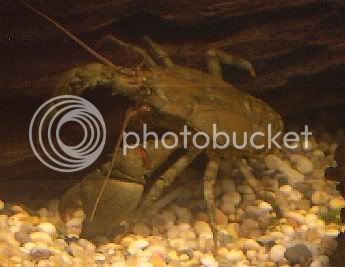 A good hiding place. Notice the Aegla peeking out. 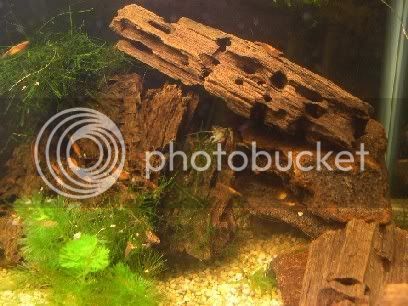 Another adult and hiding places. It's standing next to a terracota pot with gravel siliconed to it. 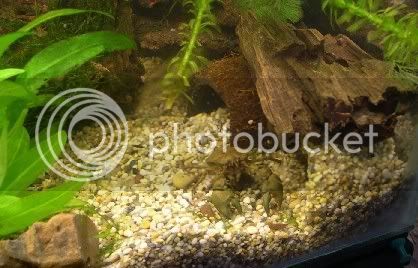 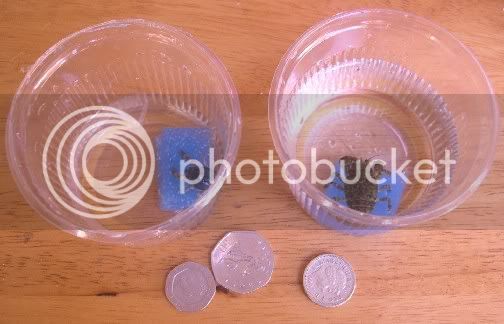 43 minutes ago
Alice B